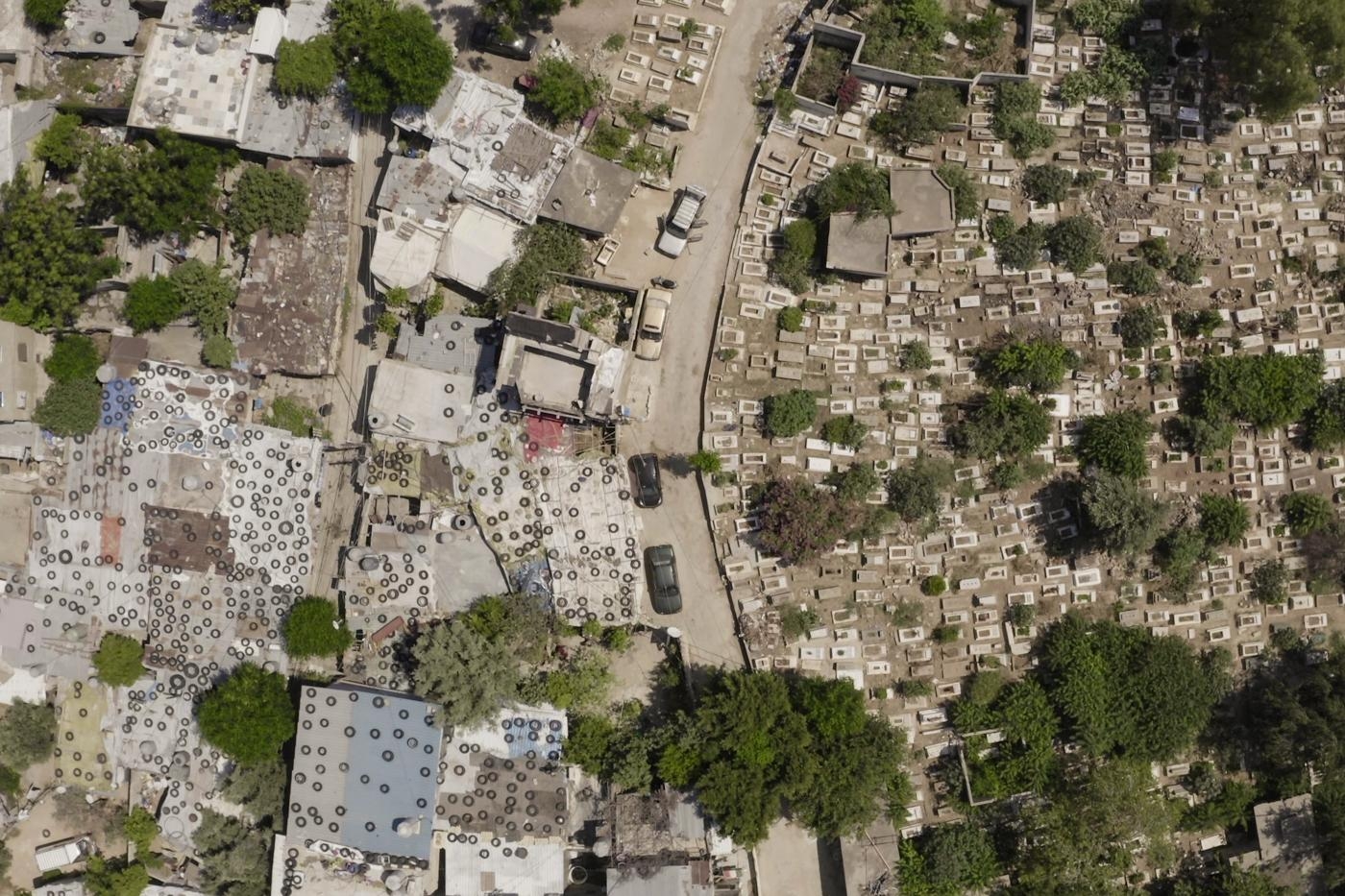 The Strangers' Cemetery: Living among the dead in Lebanon

Hidden between buildings and electrical cables in the northern city of Tripoli lies a cemetery unknown to the public, and with a unique history
Florient Zwein 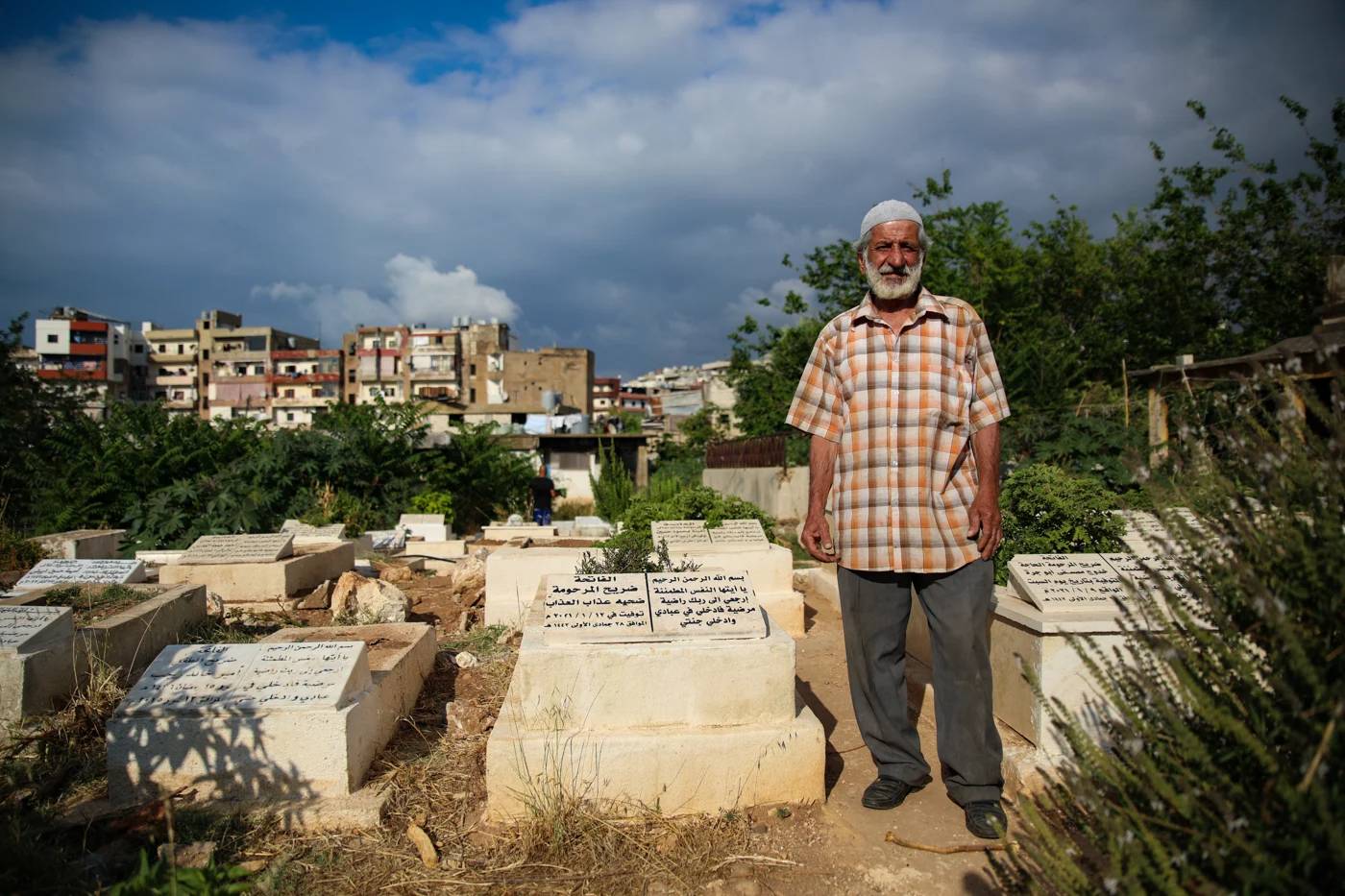 Muhammad Alloush, a 68-year-old born and raised in the Lebanese city of Tripoli, knows every corner of an area known as the Strangers' Cemetery.

"There are many people buried here," he says, listing nationalities including Lebanese, Syrians, Palestinians, Egyptians, Somalis and Bangladeshis. "Some of them were buried here without their families knowing," he adds, pointing to the graves.

Because many of the deceased are foreigners, the place was called the Strangers' Cemetery. As he wanders through its narrow passes, Muhammad explains: "In the 1960s, many poor Lebanese and Palestinians moved to Tripoli in search of work and better living conditions, [they] found refuge in this cemetery run by the city's Muslim community."

Initially, the families were offered the chance to settle on the edges of the graveyard, but as the city grew, its urban sprawl moved into the 150-year-old cemetery proper. (All photos by Florient Zwein) 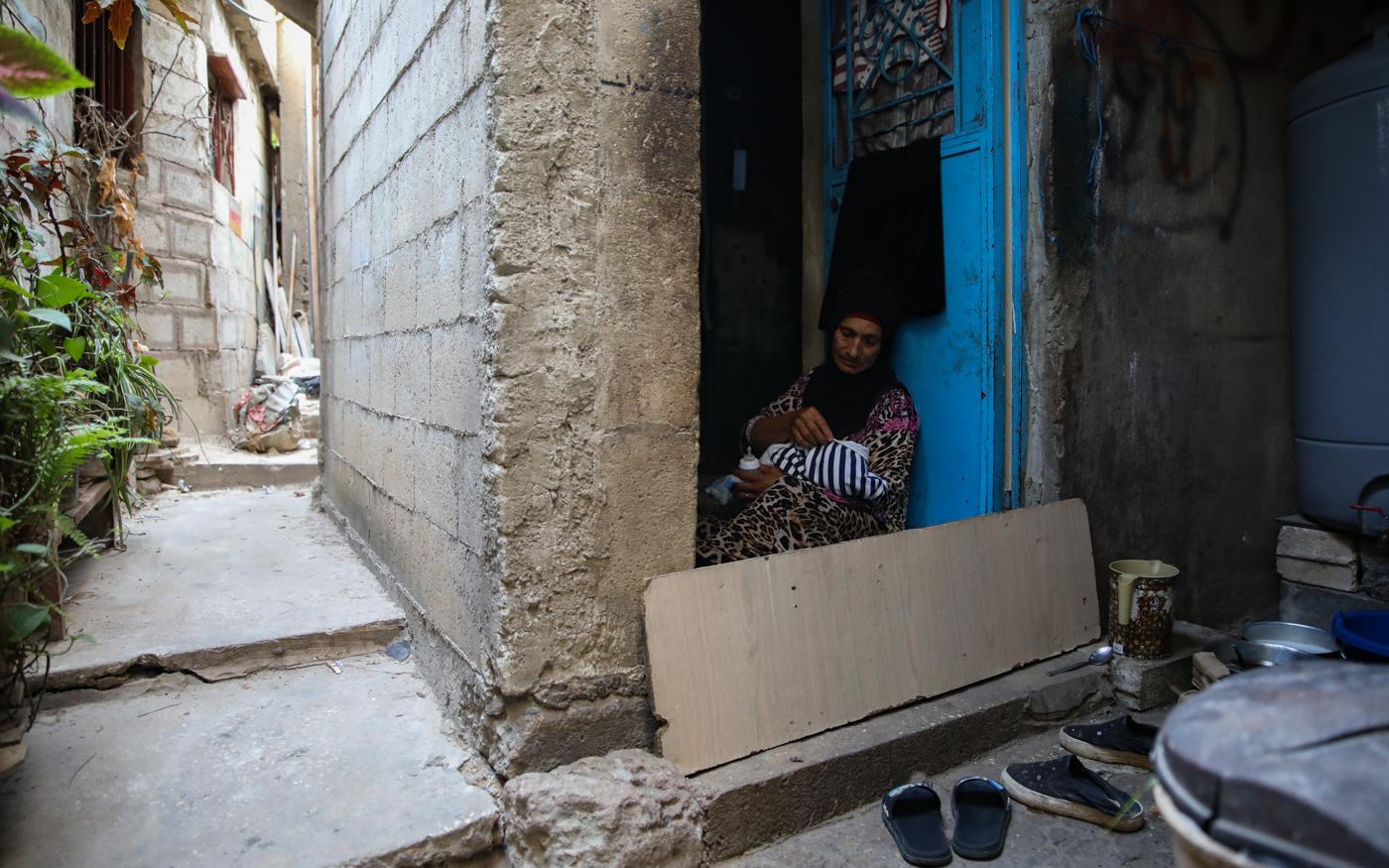 Several generations have passed since the migrations into the area. But the lives of today's residents share similarities with those who lived here previously. This is most notable in the type of buildings; temporary dwellings that became permanent. The walls are made of brick and the ceilings of sheet metal, held together by old frames. Electricity is as scarce as empty space; washed clothes hang on the window ledges, and running water is circulated in different tanks. In the narrow streets, women sit in a circle, smoking hookah and drinking coffee. A woman watches her grandson, and some men are busy repairing electrical cables. For its residents, the area is one where they are born, live and die. 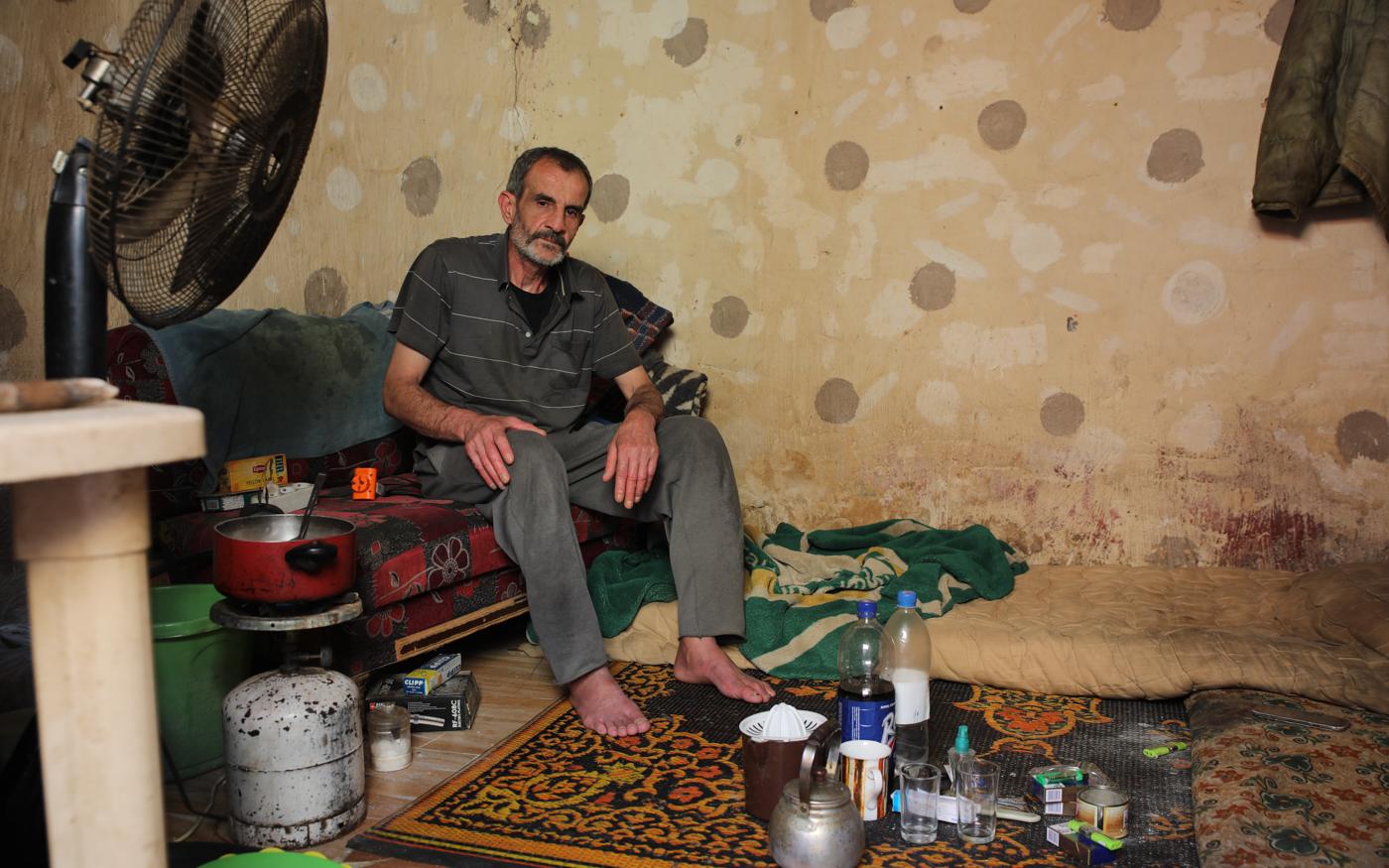 There are many Syrian refugees who now live in the Strangers' Cemetery after fleeing their country's war. Imad Kashkara, 56, is among them: a refugee in Lebanon for the past seven years, he lives in a small room, primarily just to sleep. He survives by doing odd jobs, such as garbage collection and maintenance outside the cemetery.

"I couldn't find work in Syria because of the war, so I came here,” he said, sitting on his makeshift bed with a resigned expression. Since the outbreak of war 11 years ago, more than a million Syrians have sought refuge in Lebanon. 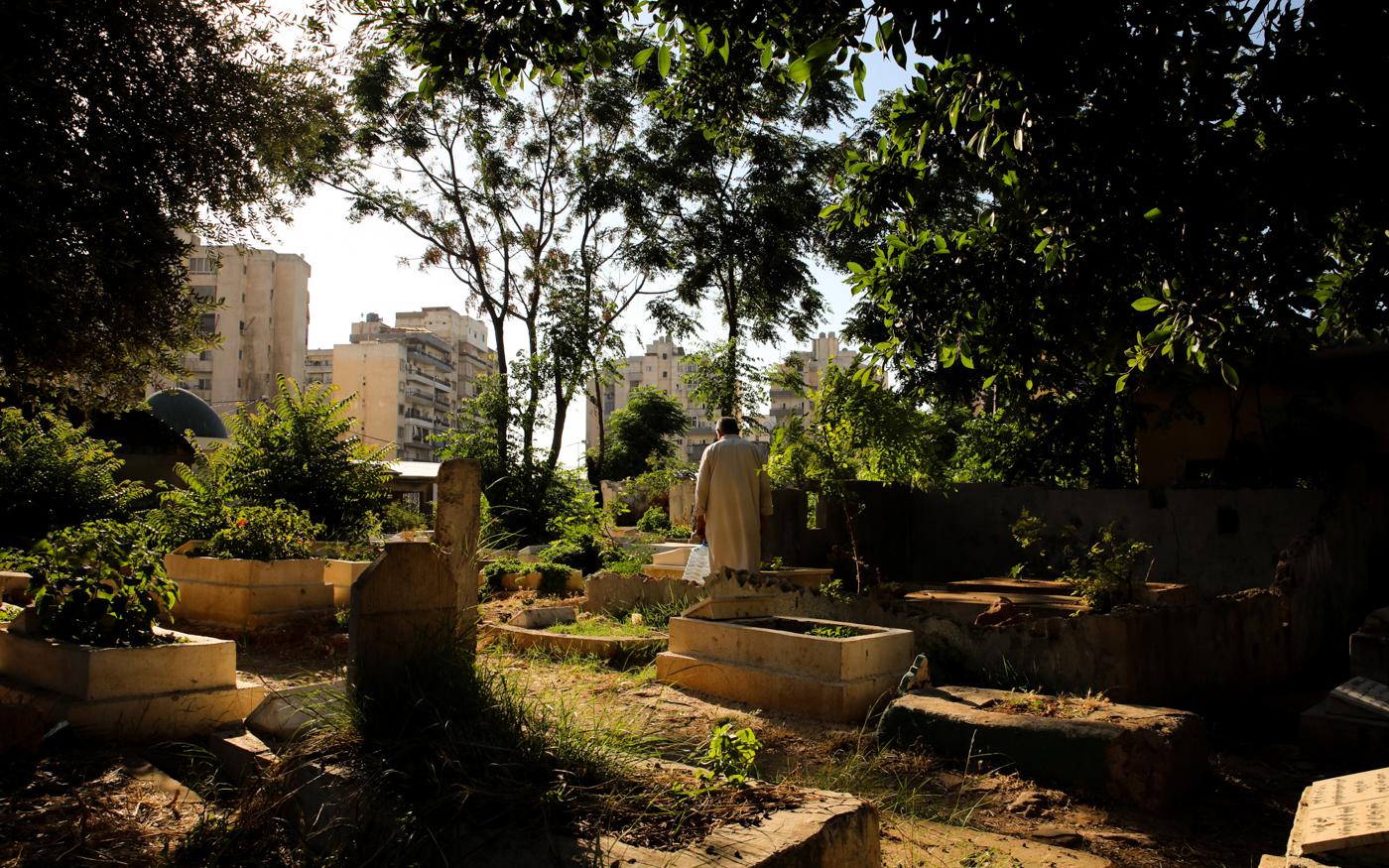 The exact number of people buried in the cemetery is unknown. Due to the lack of space, some tombs are sometimes reopened to add a new corpse. It is not uncommon for three people to share the same grave, sometimes without being related. When families living in the area cannot return the body of a deceased to their village or country of origin, this is where they find their place. Over the years, the area has become a cemetery for the poor. At the end of the day, when the scorching sun fades behind the bars surrounding the buildings and the cemetery is covered in a soft golden light, many relatives still come to visit their departed loved ones. 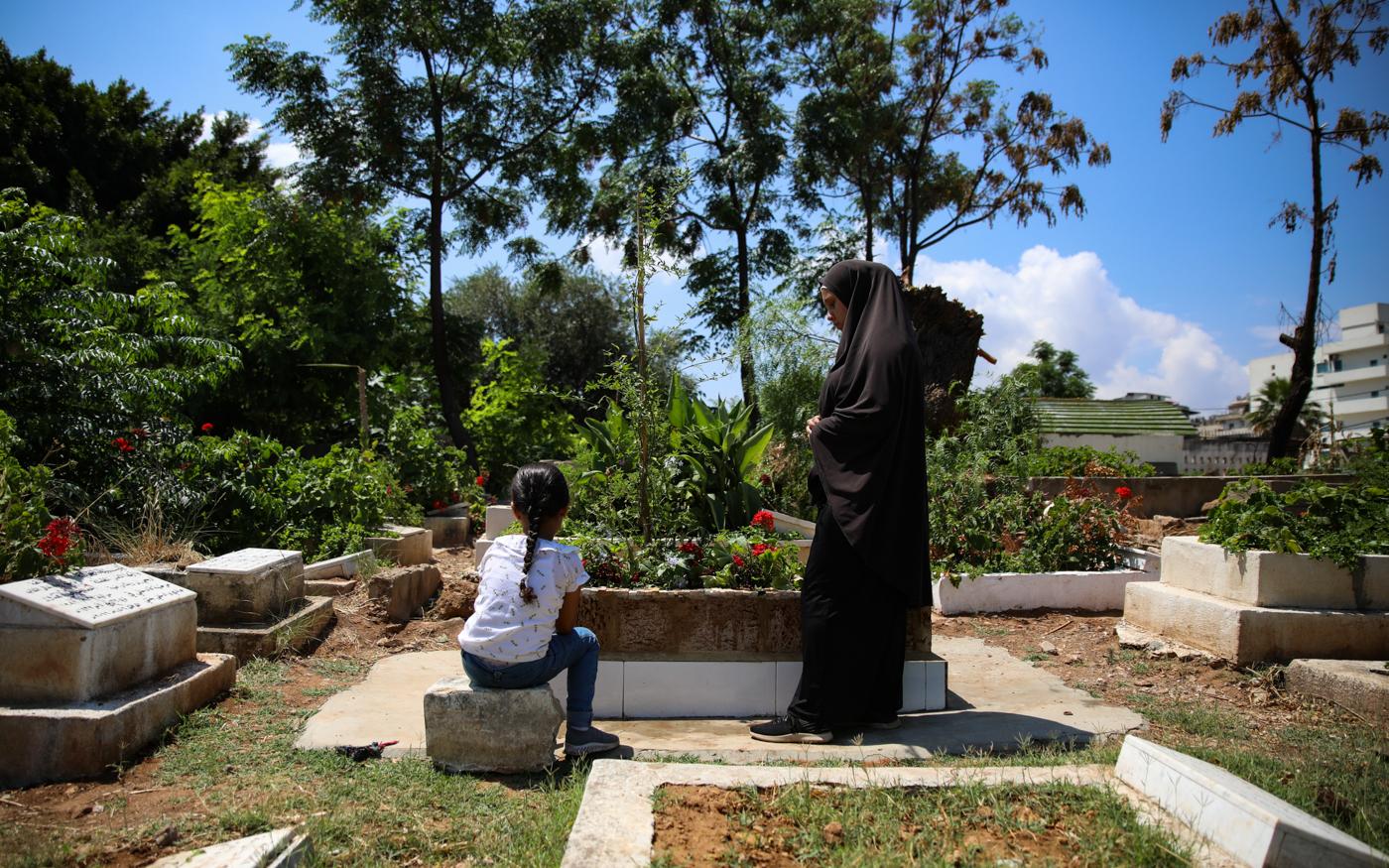 At the turn of an alley, a young girl named Nermine prays, sitting next to her aunt. The grave is new and tears still linger on her face. On the night of 23 April 2022, she set out from the southern Tripoli coast in a makeshift boat with her little sister and parents in search of a better future. The trip was cut short when a Lebanese army boat allegedly hit them, sending some of those on the vessel overboard, an accusation the authorities deny.

"The army boat came and hit us. At that moment, my mother raised her arms and disappeared into the water, along with my little sister," Nermine says.

Lebanon is experiencing its worst economic crisis in history, forcing many to look for opportunities elsewhere. The tragedy claimed the lives of more than 40 people. 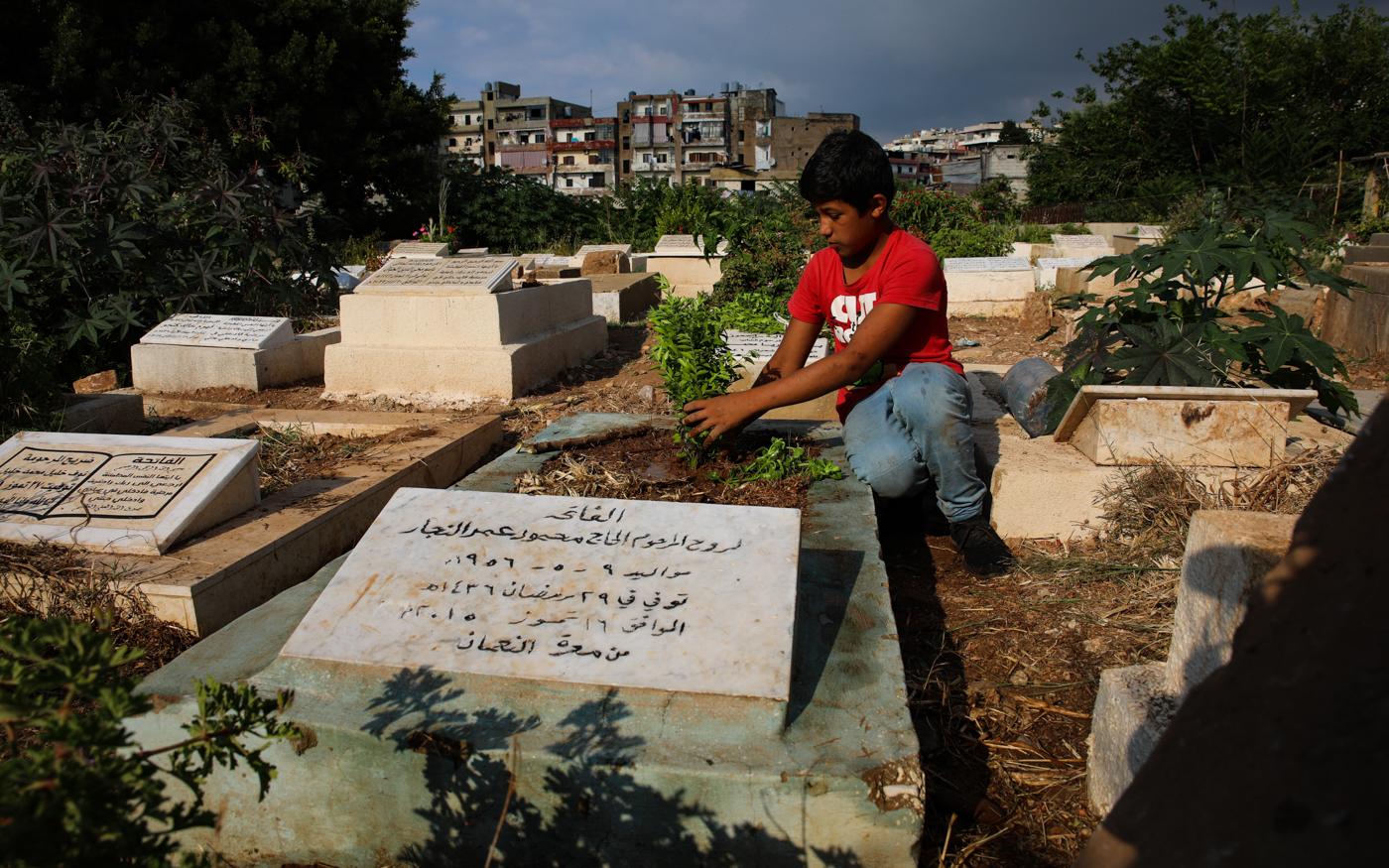 Like most children living in the Strangers' Cemetery, 13-year-old Omar was born and raised in the area. He is one of the few children to work within the cemetery area. "I clean the graves with water, remove the weeds, and then plant new flowers,” he says proudly. "When I leave the cemetery, I feel like a stranger. Here, in the midst of the graves, I feel like a prince." He uses money from the job to help his family, though he hopes to leave Lebanon one day. "When I grow up, I would like to leave this country, because here, everything is a humiliation. I would like to leave, marry and become an engineer." 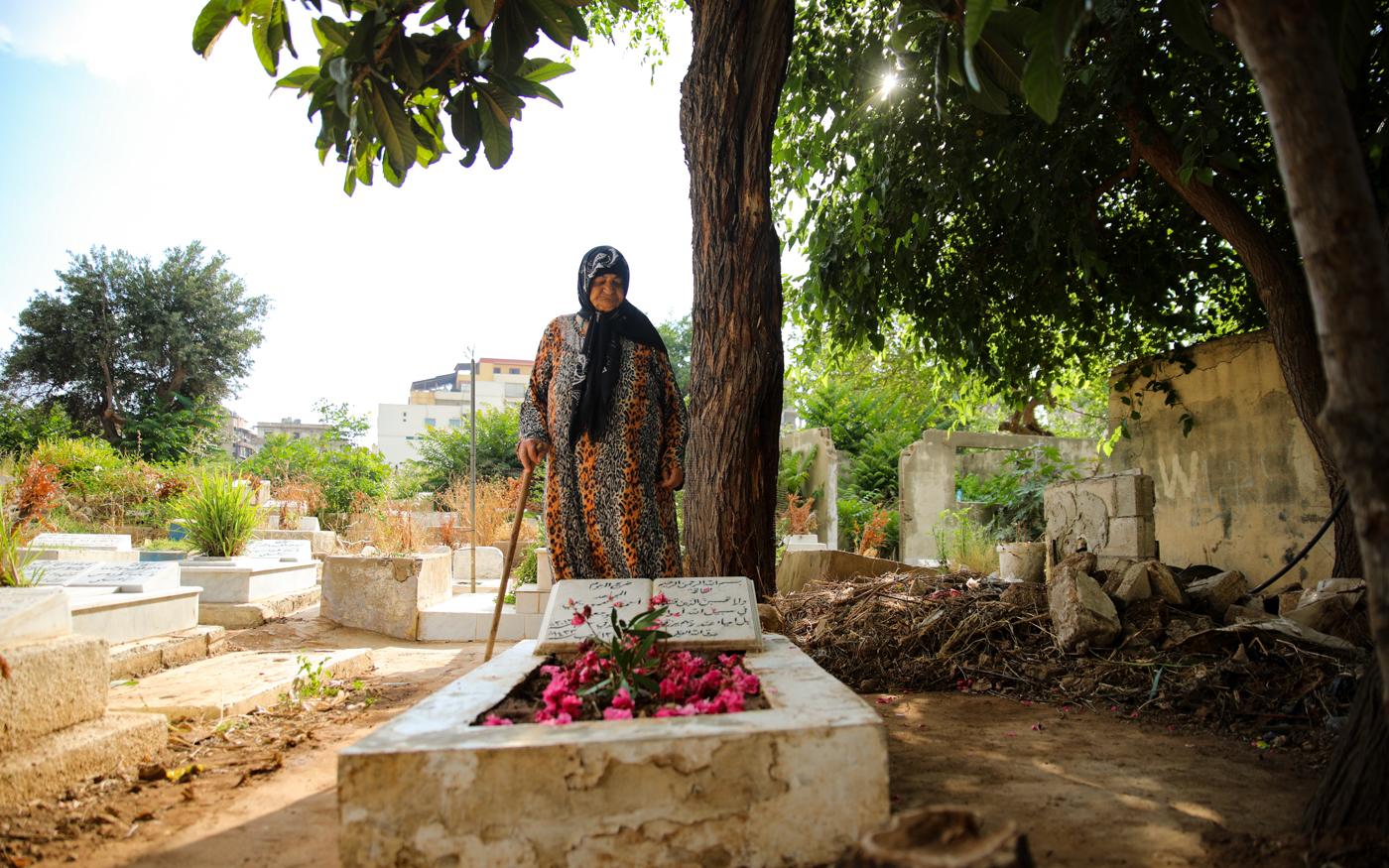 Among those buried in the graveyard are people killed during fighting between Sunni and Alawite fighters in 2012. The conflict in the Bab al-Tabbaneh and Jabal Mohsen neighbourhoods of Tripoli broke out as a spillover of the Syrian war. Waheeb Shaaban lost her son during the clashes. "I wanted him to be buried here, near me, so I could visit him," she says. While kissing the grave, she adds: "I asked to be buried here too, next to him, on the day of my death." 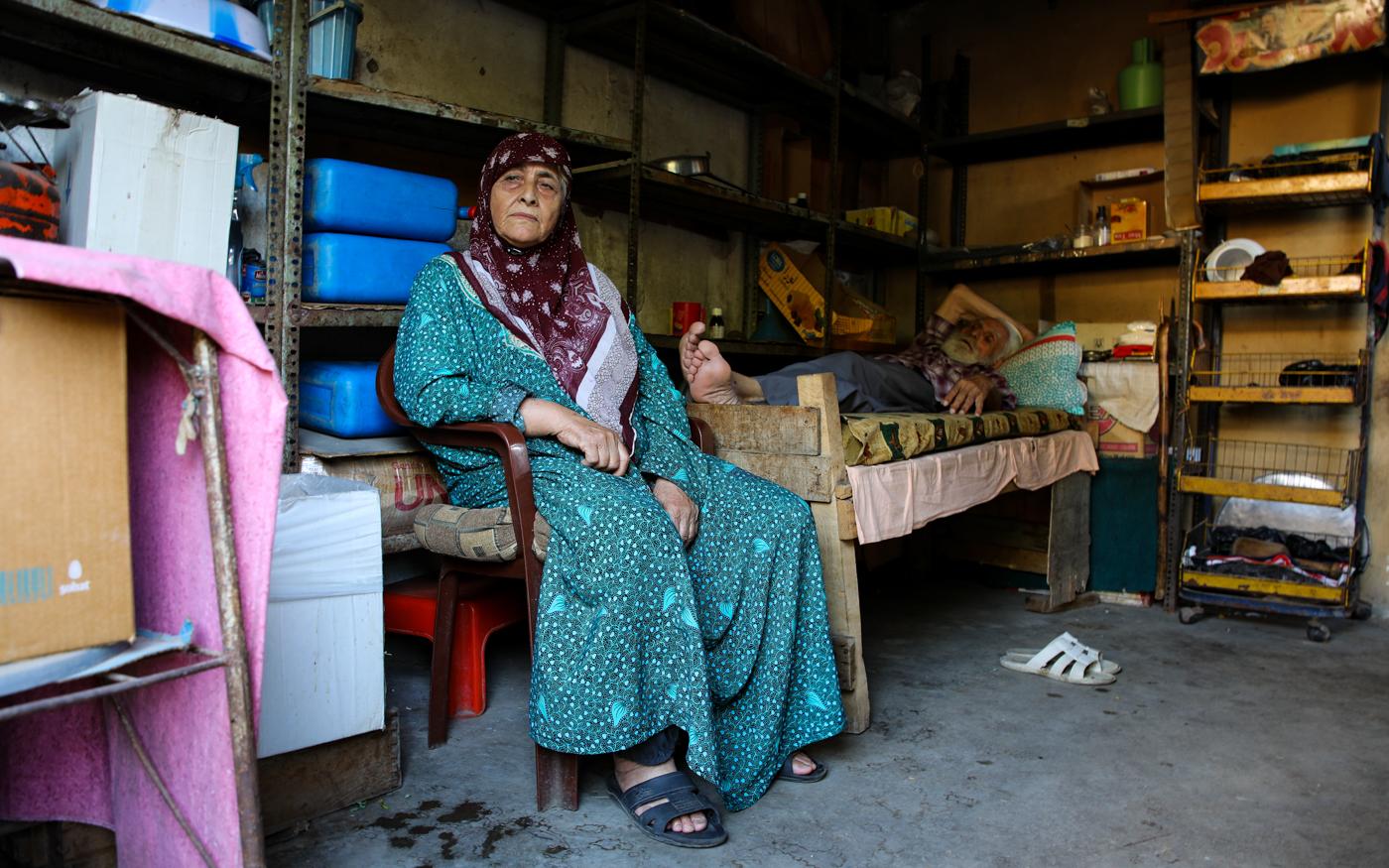 Bariaa Kaddour, 68, was just 14 when she left her village in the Akkar region of northern Lebanon to settle with her family in Tripoli.

"We had no land or resources in our village, and we were forced to come here to find work and food,” she explains. Sitting in her chair next to her sick husband, she speaks of the difficult living conditions in the cemetery: "I have lived here for nearly 60 years. I live among the dead, rats and mosquitoes. There is no running water, no electricity.”

As her husband lies ill behind her, she says the little money she earns is used to pay for his treatment. She sighs: "My husband has been sick for two years, and he can't sit or walk.

“If we are still alive, it is because it is not our time to die yet.” 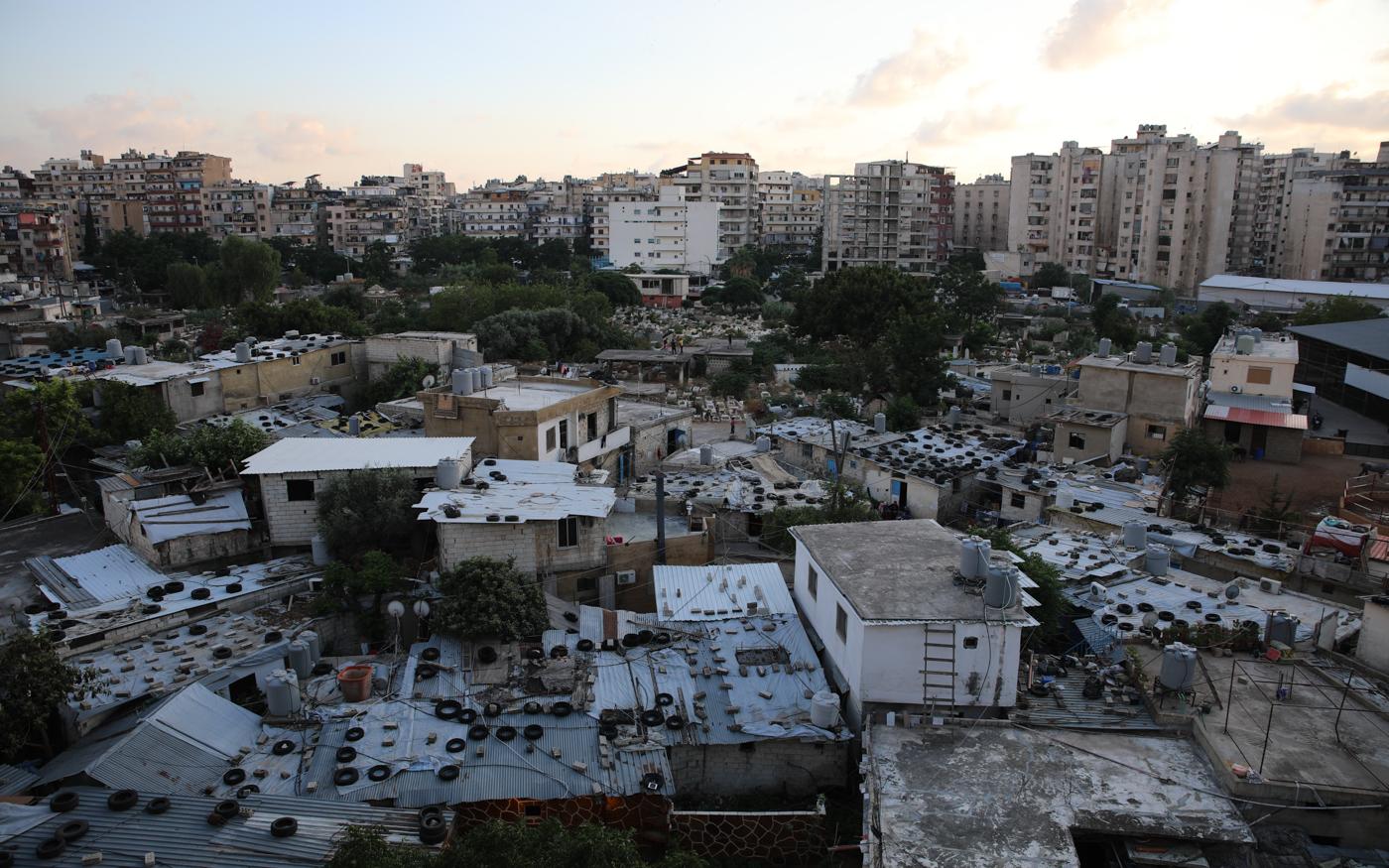 As the sun sets over the Strangers' Cemetery, children play among the graves, the muezzin's song bounces off the walls of its narrow streets, and birds fly in circles overhead. Muhammad Alloush smokes a cigarette.

“It's become normal for me to be here...the dead do not bother us,” he explains, smoking a cigarette.

“You look at them and find them more comfortable than us, the living,” he adds, pointing out that his own brother and father are buried close by.

But his decision to stay in the area is due more to a lack of options than a desire to be near loved ones who have passed away.

Taking the final drags of his cigarette, in a tired voice, he says: "If we had a choice, you wouldn’t find us here, we would have left a long time ago."

A version of this article was originally published on Middle East Eye French Edition. 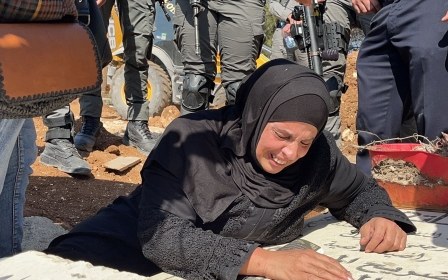 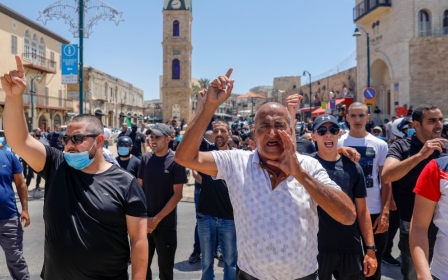 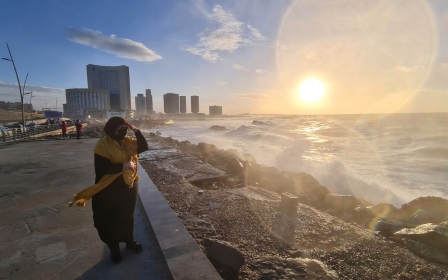