With much fanfare, coronavirus-hit Egypt has announced a $23bn investment plan. But the cash is not earmarked for the overwhelmed hospitals that are reportedly unable to even secure oxygen.

Instead it is set for a glossy new rail line, which has left some Egyptians baffled at the expenditure for a project that seems far from a priority.

The Egyptian government, however, insists the network will be a fantastic development.

In partnership with German multinational company Siemens, the line will consist of 15 stations and pass through the controversial new administrative capital, which is under construction and is yet to have a proper name.

According to reports, the project is estimated to require a budget of 360 billion Egyptian pounds ($23bn) and will take two years to complete.

Running 460km from al-Ain al-Sokhna on the Red Sea coast to al-Alamein on the Mediterranean, trains will reach speeds of 250km/h.

Translation: How many factories or schools or hospitals would this amount have made? Where are the country's priorities?

Many have said they believe the train line has been designed to benefit Egypt’s elite.

Translation: The train transports those who live in palaces in al-Alamein and want a change of scenery in their apartment in the new administrative capital... this is people’s money who can’t afford to eat or get treatment and it’s being spent on their hobbies.

Prominent Egyptian actor Amr Waked highlighted how much of a difference the billions of dollars could make to Egypt’s healthcare system.

Earlier this month, a number of reports and video footage online showed coronavirus patients being turned away from hospitals due to a lack of oxygen tanks.

Reports also revealed that many doctors and hospitals are not properly equipped with personal protective equipment (PPE) and that a surge in cases could push the country’s healthcare system to the brink of collapse.

According to Egypt’s minister of transport, Kamel al-Wazir, the new train line will also be able to transport goods, and stressed that the project cost will very likely exceed the estimated $23bn.

Wazir also said Egypt would be paying the costs of the project over a period of 20 years.

Translation: This large sum of money will be a debt for future generations and will not be of any economic benefit. This is a train that is designed for the rich as a luxury for them.

Concerns that the train would only be benefitting Egypt’s rich and elite were further fuelled after prominent Egyptian businessman Naguib Sawiris took to Twitter to question why the line would not cross by Hurghada, a popular tourist destination near El-Gouna, a resort he owns.

“Does anyone understand why the high-speed train runs from al-Ain al-Sokhna to al-Alamein and not from Cairo for example or Hurghada?” he said on Twitter.

In response, Wazir said the government would happily build a new station along the line for his resort - as long as Sawiris pays for it.

However, some were more optimistic about the new rail plan, suggesting that it would provide a range of benefits to people living around the country.

Football icon Ahmed Hossam Mido weighed in on the issue, insisting the project would likely create plenty of job opportunities for workers around Egypt.

Translation: I don’t know where people are getting the idea that this train line is only for rich people . The train line, crossing the Red Sea, is full of workers in areas such as Al-Zafarana, Ras Ghareb, Hurghada and Safga - this trainline will serve them all well. As well as that, it will also create job opportunities.

The Egyptian government has invested in a series of high-profile infrastructure projects - with the new administrative capital perhaps the most prominent.

Currently being built in the desert 45km east of Cairo, private construction companies are hard at work under the supervision of the army.

The ambitious project aims to house the government, a presidential palace, the supreme court and the central bank, as well as an airport and business district.

However, critics have long argued that Egypt cannot afford such mammoth projects, particularly at a time when the healthcare system is faltering and unemployment is on the rise.

The $45bn project is expected to be about the size of Singapore and has raised many concerns over its economic feasibility. 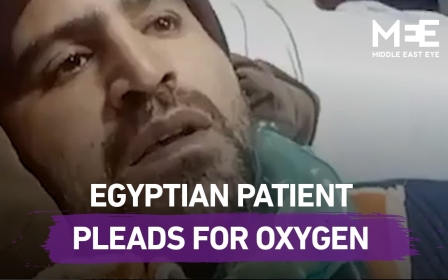 Covid-19
‘Save us!’: Egyptian patient pleads for oxygen at Damanhour hospital 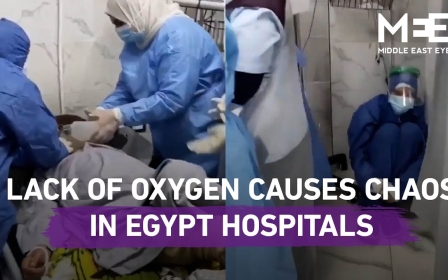 Covid-19
‘Everyone died!’: Shocking video shows panic in Egypt hospital due to alleged lack of oxygen