Meanwhile, US food security envoy says 200 million people globally are at risk of hunger; and Egypt keeps more than 8,500 factories closed amidst an economic crisis 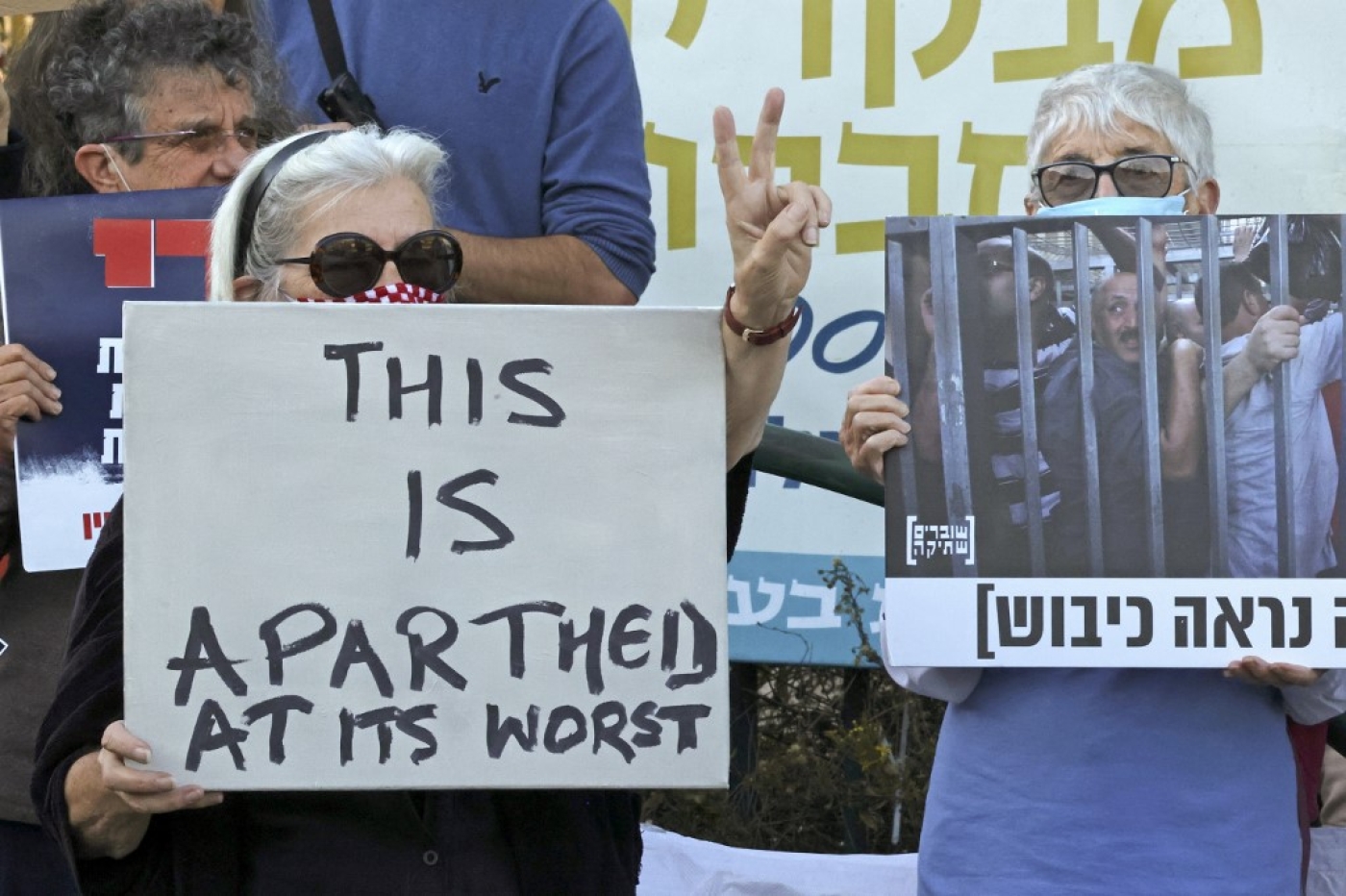 Israeli left-wing groups protest the Israeli president's planned visit to the Tomb of the Patriarchs, known to Muslims as the Ibrahimi mosque, in Hebron in the occupied West Bank, on 28 November 2021 (AFP)
By
Mohammad Ayesh

Solomon Sacco, deputy director of Amnesty International's Law and Policy Programme, has revealed that legal advisers to western governments admit in private meetings that they see no error in reports by international human rights organisations that classify Israel as an apartheid state, he said in an interview with Arabi21 website. On the sidelines of a conference on Israel's apartheid regime against Palestinians, organised by the International Centre of Justice for Palestinians (ICJP), in London on Tuesday, Sacco said that, "Amnesty International has concluded that Israel has committed an internationally prohibited crime against humanity, represented by apartheid.

Sacco stressed that "there is a consensus among human rights and non-governmental organisations that Israel is applying a system of control against the Palestinians, and is consolidating apartheid against millions of Palestinians”.

US envoy: 200 million people in the world at risk of severe hunger

The US Special Envoy for Global Food Security, Cary Fowler, said that Russia’s invasion of Ukraine has exposed an additional 40 million people worldwide to food insecurity, making 200 million at risk of severe hunger.

In an interview with the Saudi Asharq Al-Awsat newspaper published on Sunday, Fowler said there are three main factors that threaten food security: climate change, conflict and the pandemic, stressing "the need to build more resilient food systems that enhance the ability of countries to deal with shocks".

The US official said there is a serious risk in sub-Saharan Africa, the Near East and South Asia due to food insecurity, adding that 45 percent of Yemen's children have developmental delays today.

In Fowler's view, the Russia-Ukraine war highlighted the interdependence of the world's food systems, explaining that "disturbances in one part of the world can cause complex effects throughout the world".

Members of the Egyptian parliament revealed on Sunday that more than 8,500 factories are currently closed indefinitely, which has led to a significant rise in unemployment, as well as a stifling crisis in the country's industrial sector, according to the London-based Al-Arabi Al-Jadeed newspaper.

Some MPs sharply criticised the Minister of Trade and Industry, Nevine Gamei, during a heated discussion regarding the suspension and sale of state-owned factories, and the industrial sector’s suffering from many problems, including the difficulty of securing the US dollar for them to import the raw materials needed for the industry.

"There is no clear plan or vision for the government to rise from the aggravated industrial crisis, due to the global conditions resulting from the war in Ukraine, while other countries have successfully exploited the crisis in the interest of developing their exports and supporting their national economy," MP Ahmed Samir, chair of the Economy Committee, said.

Another MP, Ayman Mohsab, said: "Factories are suspended in Egypt, workers are homeless, and the solution to the crisis is to discuss ways to restart the stalled factories, establish new factories to encourage and modernise the Egyptian industry, and develop the local product to increase the volume of Egyptian exports to countries around the world."

"Egyptians depend for their food and drink on imported foreign products," he added.

"According to official statistics, there are between 8,000 to 8,500 suspended factories in Egypt, which are alarming numbers, which resulted in the displacement of workers and the spread of unemployment in the sector".