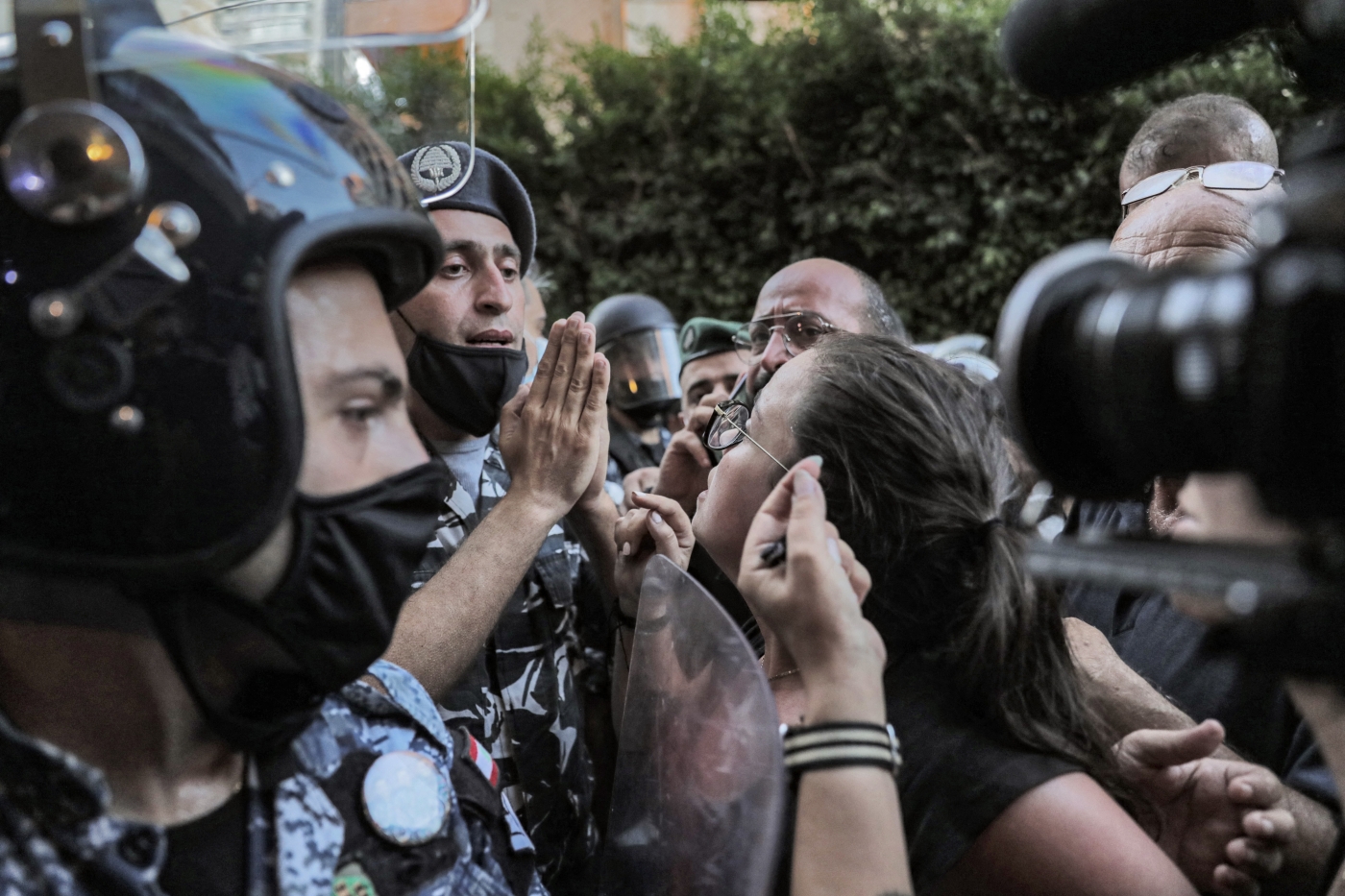 Lebanese social media users slammed security services for their harsh response to protests yesterday by relatives of victims of the 4 August 2020 port blast - while also having failed to properly investigate the blast itself.

The Lebanese Internal Security Forces fired tear gas and tussled with families of the dead and their supporters outside the house of caretaker interior minister Mohammed Fahmi on Tuesday.

“A whole city was destroyed, and you didn't move. More than 7,000 victims fell and you did not act,” wrote journalist and scriptwriter Imane Ibrahim, referring to one count of the number injured.

“And when the wreckage reached the windows of the minister's building, you moved. You are employees of the corrupt authority, not security forces.”

Fahmi has been accused of stalling a probe into the port explosion which killed more than 200 people, and wrecked huge swathes of the capital.

Earlier this month, he rejected a request by the judge investigating the blast to question Abbas Ibrahim, head of the General Directorate of General Security, one of the country's top security agencies.

The ISF used its official Twitter account on Tuesday evening to condemn the scenes outside Fahmi’s home.

One tweet included a video of the entrance to the building being damaged by protesters, and mentioned that 20 members of the security forces had been injured.

The post was heavily criticised by Lebanese social media users, who accused authorities of taking stronger action against the damage of the minister's home than it did in relation to the blast.

One Twitter user aptly responded by posting a clip from the 1998 film West Beirut, in which a woman decries: “We’re dying and all he cares about is his glass.”

“We are watching this video and we are proud of the hero who broke the door,” wrote Lebanese writer and translator Lina Mounzer.

“We do not pity those who protect the authority of corruption and shame and turn away from the people who lost everything and only demand their rights.”

In two other tweets, the ISF shared images of wounded officers, and stated that it was their “legal duty to protect public and private property.”

The ISF also blamed the violence on groups who arrived at the sit-in separately from "the families of the martyrs of the port".

“Security forces protect those who are wanted. Do your duty and apply the law to those who blew up Beirut,” responded Beirut-based Sky News Arabia reporter Salman Andary.

Ok we will investigate this right after we get to the bottom of who decimated the capital and killed 220 people https://t.co/OcDCbrm8MS

During the angry protests outside Fahmi’s home, relatives of victims displayed portraits of the dead in a makeshift shrine and piled up white coffins nearby.

"These are the coffins of our children," said Paul Najjar, who lost his three-year-old daughter Alexandra to the explosion.

"By refusing to lift Abbas Ibrahim's legal immunity, the interior minister is standing between us, the relatives of blast victims, and justice."

The official probe launched in the wake of the tragedy, which was caused by the detonation of a huge stockpile of fertiliser lying in the port, has yet to hold any officials to account.

The day will come and this evil ruling class will hang for every drop of blood that was shed. We will keep on fighting till justice prevails #لرفع_الحصانات_الآن pic.twitter.com/1aD0C6UVq7

“We will not let those who deprive you of the blessing of life go unpunished,” wrote one user, sharing a picture of two-year-old Isaac Oehlers who lost his life in the blast.

On Wednesday, President Michel Aoun announced that 4 August would be a day of national mourning to mark the anniversary of the blast. But several observers found the efforts to be misguided.

Translation: He kills the dead and walks at his funeral

“We don't want a day of mourning,” wrote one user. “We want an investigation, justice and accountability.”