A Muslim woman holds a poster during a protest against Donald Trump on 20 December 2015 in New York. (AFP)
By
Mahmoud Bondok

In two months, Donald Trump will officially be sworn in as the new president of the United States. But it hasn't been two days since the election results and American Muslims and minorites are already feeling the aftermath on the streets.

Trump's rhetoric against Muslims and other minorities during the campaign has led to accusations that he is encouraging racial abuse.

Muslim women were most affected with many taking to social media to report the encounters they faced with some even being warned by family members not to wear the headscarf when going out.

Farris Barakat, the brother of Deah Barakat who was murdered with his wife and her sister in Chapel Hill, North Carolina, last year in a suspected hate crime, reported widespread fear among Muslim Americans after the election results. “A lot of people are very afraid,” he told MEE.

The day after Trump's victory, a student in Louisiana was attacked and had her hijab pulled off, according to reports.

Another student was robbed in San Diego and reported that her attackers abused her for being a Muslim.

Some wrote messages of support and solidarity to encourage others not to be cowed into removing their hijabs. USA 2016
Worried Muslim Americans: We will fight for rights under Trump 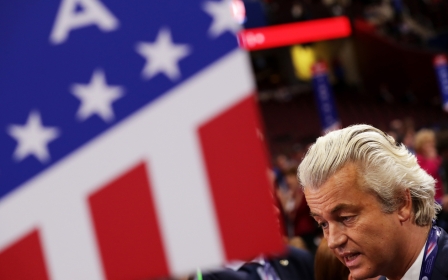