'Just for laughs': Palestinian tells MEE of being shot in the back by Israeli soldiers

A leaked video shows Karam Qawasmi getting shot in the back; an incident which, he says, has happened to many other Palestinians, but with no cameras around 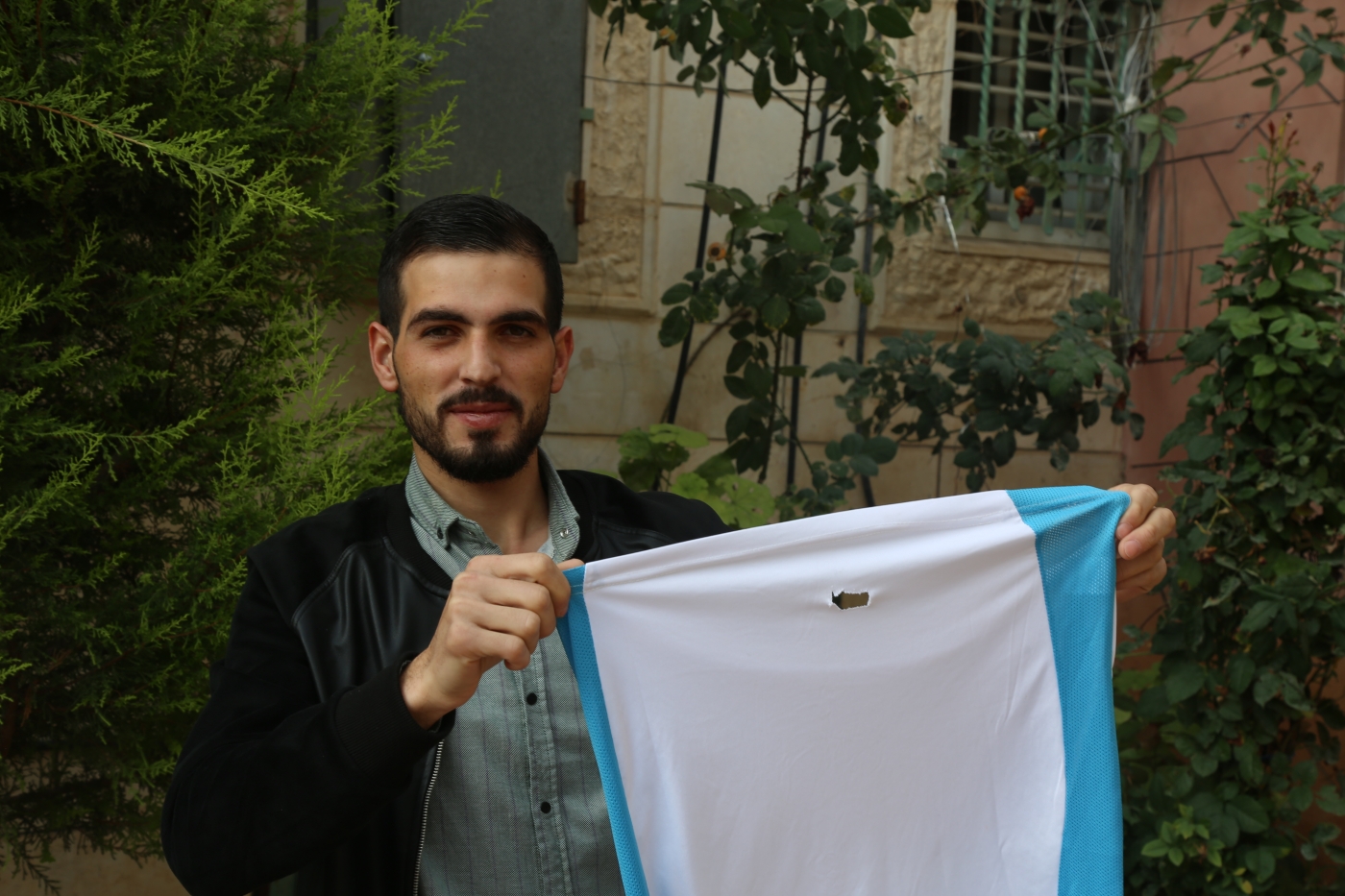 Karam Qawasmi, a 22-year-old Palestinian from Hebron, holds the T-shirt he wore when an Israeli soldier shot him in the back (MEE/Alaa Daraghmeh)
By
MEE staff

A Palestinian who was shot in the back by a sponge-tipped bullet told Middle East Eye that he was on his way to look for a job in occupied East Jerusalem when Israeli soldiers stopped him, beat him, and shot him.

Karam Qawasmi, a 22-year-old from the city of Hebron, in the south of the occupied West Bank, said that the incident - a video of which was leaked by an Israel channel early in November - happened a year and a half ago.

Qawasmi recalled walking toward the East Jerusalem neighbourhood of Zaayyem when Israeli soldiers stopped him.

“They rammed me [with a jeep], then took me under a bridge and started beating me,” Qawasmi said.

He was kept for almost three hours under the bridge, east of the Old City of Jerusalem, before the soldiers released him.

Qawasmi then asked to take the route leading to the Zaayyem area, but the soldiers insisted that he walks towards the Anata area, located to the northeast of Jerusalem.

“I had to listen to them. I put my hands up and kept walking. I heard them shouting, and when I turned around, I saw three soldiers sitting on the ground aiming their guns at me - as if they wanted to shoot me,” Qawasmi said.

When he turned to carry on walking, Qawasmi heard a popping sound as an Israeli soldier shot him in the back with a sponge-tipped bullet - ammunition used for crowd control that can be lethal at short distances.

“I felt numbness in my body that lasted around five minutes,” Qawasmi said.

“I do not know who exactly shot me, but after I got up, all of the soldiers started to shoot around me, just for laughs.”

He walked for an hour and a half to get to the Anata area and then sought treatment in a hospital in Hebron.

Qawasmi, who had only told his parents about the incident, still feels pain in both of his arms from when the soldiers forcefully twisted them behind his back.

He said he felt angry upon reading the news that the soldiers in question were only suspended from their positions - a sentence he thought was too light for the attack he suffered.

“What happened to me has happened to many young Palestinians while on their way to their jobs or to their studies. But unfortunately, there were no cameras to document it,” Qawasmi said.

Around 2.9 million Palestinians live in the West Bank, according to the  Palestinian Statistics Bureau, alongside more than 400,000 Israelis in settlements that are illegal under international law.