Dubai's deputy chief of police, Dhahi Khalfan, has sparked fury from Saudi social media users after writing a series of tweets in which he called upon Sunni Muslims to mobilise to protect Mecca from Iran and Yemeni Houthi forces.

Khalfan claimed that the Houthis and Iran have plans to occupy the Saudi city, home to the Kaaba, the holiest site in Islam, and Sunnis have no choice but to defend it "to death"

Translation: Gather hundreds of thousands of fighters, surround Mecca from all sides and swear that we will protect it with our souls o Sunni people… so that Iran knows who we are and how we are

He went on to tweet, “Take it from me… occupying Mecca is a Safavid project,” referring to the Shia-led government of Iran.

Khalfan’s posts were met with criticism online by scores of Saudi social media users who felt that his words offended the strength of Saudi Arabia.

Some users raised concerns about the divisive nature of Khalfan’s tweets, which appear to pit the sects of Islam against each other:

1. The house [Kaaba] has a Lord who protects it
2. Designating the Sunnis to protect sanctities indicates an attempt to divide the people on a sectarian basis, and this is unacceptable and the sanctities are for all Muslims
3. There are neighbouring areas that take priority for mobilisation so that Iran can see that there are strong “men”
4. We have heard the terms “gather, combatants, surround” in speeches given by some figures - we hope you will not be influenced by them

Others highlighted the hypocrisy of Khalfan’s words.

Translation: If you are being honest, then cut off the diplomatic and commercial relationship with Iran in support of the Sunnis. As for a debate without action, this is a sample of hypocrisy. Mecca is under God's protection and the protection of the House of Saud and the Saudi people who are trained to fight. Upon a signal from the king to fight, Iran would be burned.

Meanwhile, some urged Khalfan to redirect his attention to three islands that the UAE has accused Iran of occupying since 1971. Iran also claims ownership over the Abu Musa, and the Greater and Lesser Tunbs islands.

Translation: Call for armies to liberate the three islands. As for the two holy sanctuaries [Mecca and Medina], they are protected by God Almighty and then by their men and rulers

Both Saudi Arabia and the United Arab Emirates have designated the Houthi movement as a terrorist group.

This is not the first time that Khalfan’s tweets have caused controversy.

In a series of tweets posted in 2018, he called upon Dubai authorities to stop hiring Pakistanis, referring to those living in the UAE as smugglers, drug-peddlers and criminals. 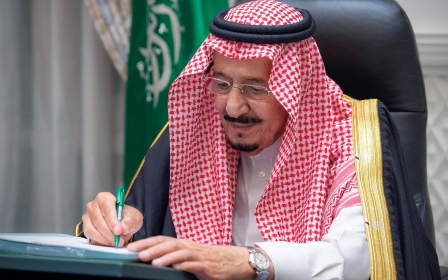