Several US officials have hired private lawyers over fears they could be arrested and charged with war crimes while travelling abroad over the sale of US weapons to Saudi Arabia and the United Arab Emirates which are used in the war in Yemen.

An investigation by the New York Times, which included interviews with more than a dozen current and former government officials, found that officials were concerned that the sale of arms - one of President Donald Trump's foreign policy cornerstones - could lead to charges of war crimes against American officials.

On Wednesday, those concerns will be the subject of congressional hearings, as House lawmakers are expected to question top State Department officials on just how and why the US has kept a steady flow of weapons open to the Gulf states inflaming Yemen's civil war.

The legislators are also expected to ask about the alleged cover-up of internal findings on civilian casualties and the legal risks that could potentially face American officials abroad.

The NYT found that over the course of two presidential administrations, such concerns have grown to a level that some officials have hired their own lawyers to discuss fears of being arrested while travelling overseas.

The newspaper said those concerns have intensified under US President Trump, as rank-and-file staff watched arms sales be forced through by the administration despite internal objections as well as those from Congress.

At the heart of those concerns lies last year's $8.1bn arms sale to Saudi Arabia and the UAE, which was blocked by bi-partisan legislation before being vetoed by President Trump and pushed through via an emergency declaration. During the past five years, legal scholars have warned that the US's support for the Saudi-led coalition in Yemen is unprecedented and puts the United States in a position to be accused of providing material support to a military offensive that has continuously killed civilians.

Last week, the United Nations issued a detailed report on the Yemen war, asking the Security Council to refer the conflict to the International Criminal Court (ICC) for an investigation into potential war crimes carried out by all parties.

The report said that countries including the US, the UK, Canada, France and Iran continued their support to the warring sides "including through arms transfers, thereby helping to perpetuate the conflict".

"After years of documenting the terrible toll of this war, no one can say 'we did not know what was happening in Yemen'," said Kamel Jendoubi, chairman of the Group of Experts.

The United States, not a party to the ICC, has objected to any investigations into itself or allies, with US Secretary of State Mike Pompeo earlier this month calling the court "illegitimate".

During the last several months, the US has gone so far as to levy sanctions against top ICC officials for their part in pursuing an investigation into the US's actions in Afghanistan and Israel's actions in Gaza.

The court's investigation into the US war in Afghanistan marked the first time the ICC had authorised a case against the United States.

Regardless of whether the ICC is able to investigate war crimes in Yemen, individual countries could still charge American officials for their part in the continuation of civilian deaths in the small Gulf state. Sweden, Spain and Germany, for example, assert universal jurisdiction over war crimes.

In 2009, Spain did pursue charges related to the torture of Guantanamo Bay prisoners against six US officials, citing universal jurisdiction, but the case was dismissed in a higher court.

Concerns over the culpability of US officials regarding the war in Yemen date back to the Obama administration, which in October 2016 blocked a shipment of precision-guided bombs to Saudi Arabia after it used a US-made munition to strike a funeral hall, killing 155 people. The Saudi coalition blamed "incorrect information" for that strike.

But when Trump took office in 2017, the once-blocked bomb sales were almost immediately granted approval.

At the time, officials in the State Department’s Political-Military Affairs Bureau, which heads arms exports, wanted assurances that the move would not put themselves in legal jeopardy, NYT reported. Before Trump’s visit to Saudi Arabia in May 2017 - his first overseas trip - Mike Miller, one of the bureau's top officials, expressed concerns over the weapons sales during a White House meeting. According to two officials who spoke to the NYT, Miller said he was worried he could be found liable for aiding in the killing of civilians.

While officials drafted guidelines for arms sales between the US and Saudi Arabia, as the months went by and the Trump administration grew more eager, those guidelines were pared back, officials close to the matter told the newspaper.

“We worked pretty rigorously to try to give them a sense that this was now going to be a harder sell,” Tina Kaidanow, who headed the state Department's Political-Military Affairs Bureau at the time, said of the Saudis, as quoted by the NYT.

Stuart Jones, then the acting assistant secretary in the department's Bureau of Near Eastern Affairs, told his staff to settle more quickly on conditions, officials told the newspaper.

Emails obtained by the NYT show that Jones and his colleagues discussed different ways to craft the language of those conditions in a way that would be acceptable to Saudi Foreign Minister Adel al-Jubeir.

Meanwhile, Jared Kushner, Trump’s senior adviser and son-in-law, was leading the effort to restart arms sales and was reportedly insistent on the issue being sorted before Trump's May 2017 trip to Riyadh. During the visit, Trump indeed announced a new set of arms sales.

By March 2018, Secretary of State Tillerson had been abruptly fired, and John Sullivan, the department's deputy secretary, had taken over.

Staffers concerned over the legality of the arms sales sent an appeal for legal clarity to Sullivan, who responded by approving a memo the officials had drafted that recommended carrying out a robust strategy to reduce civilian casualties. The memo also approved an updated legal analysis to be carried out before the bomb sales moved forward, according to the NYT, which cited two US officials.

Sullivan's tenure was short-lived, however, and Secretary Pompeo soon took over. Then, in August 2018, a Saudi coalition jet dropped a 500-pound American-made bomb on a Yemeni school bus, killing 54 people, including 44 children.

A month later, Pompeo issued a formal certification to Congress that said the Saudi-led coalition was actively working to minimise civilian deaths, despite news reports and internal State Department assessments to the contrary.

According to officials who spoke to the NYT, State Department leadership had warned Pompeo against the certification, in part because they had grown more anxious over the legal issues.

Following the Saudi killing of journalist Jamal Khashoggi in 2018, Congress became even more concerned with the US's seemingly blanketed-support for the Saudi kingdom, and began the work to block further weapons deals.

After several bills passed in one house and failed in another, the two chambers of Congress in April 2019 succeeded in passing legislation to halt future weapons deals to the kingdom.

With a veto in hand, Trump knocked down the legislation and penned an emergency order, citing Iranian aggression, to push through the $8.1bn sale to Saudi Arabia and the UAE, which included $3.8bn worth of precision-guided bombs and bomb parts.

Lawmakers in the House were wary of the Trump administration's emergency declaration and asked the Inspector General to investigate the merits of the move.

The investigation was set to document the longstanding legal worries of US weapons sales and was problematic to the State Department in part because it could also create a written hard copy of potential wrongdoing by the United States, which could increase its legal culpability.

In May, Inspector General Steve Linick, who had been leading the investigation, was abruptly fired by President Trump, who said he had done so under the suggestion of Secretary Pompeo.

The administration has insisted the firing of Linick had nothing to do with his investigation into the arms deal, or a separate investigation into Pompeo's use of federal staffers to run personal errands. But during congressional testimony in June, Linick said Pompeo and other State Department officials had pressured him to drop the investigation. US did not 'assess risks' of civilian casualties in Saudi arms sale, watchdog says
Read More »

For a time, top agency officials were able to conceal the findings of the IG report, working to ensure the Inspector General kept details of the investigation classified; for instance, even the copy of the report given to lawmakers with security clearance was heavily redacted.

But in August, findings of the investigation were publicised, revealing that the State Department failed to address the risks of selling arms to Saudi Arabia and the UAE before pushing through its $8.1bn emergency arms sale.

According to the IG report, no updated civilian casualty mitigation strategy or legal analysis was carried out before the weapons included in the arms deal were shipped out.

The report noted that while Pompeo did not violate the law in declaring the emergency sale, the State Department had failed to take proper measures to reduce civilian casualties and prevent legal risk.

Since the emergency declaration, which applied only to last year's arms sales, Saudi Arabia and the UAE have sought to buy more American-made bombs, with about $800m worth currently pending but held up by Congress.

Meanwhile, the UAE has plans to buy F-35 jet planes from the US as part of its deal to normalise ties with Israel. While the Emirates have been withdrawing its forces from Yemen, it has continued to play a role in the Libyan civil war and stands accused of breaking a UN arms embargo on the country.

US Politics
Biden administration vows to consult with Israel on 'all' regional issues
Arab Spring
Democracy triumphs in America. Now the US must support it in the Arab world
David Hearst
US Politics
NYC mayoral candidate blasted for comparing BDS to 'fascist boycotts' 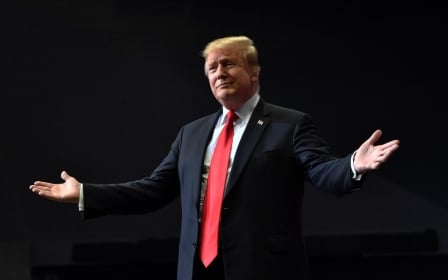