Amman International Film Festival: The ones that made a mark

Jordanian showcase focuses on first-time directors, reflecting a growing interest in film making in the country 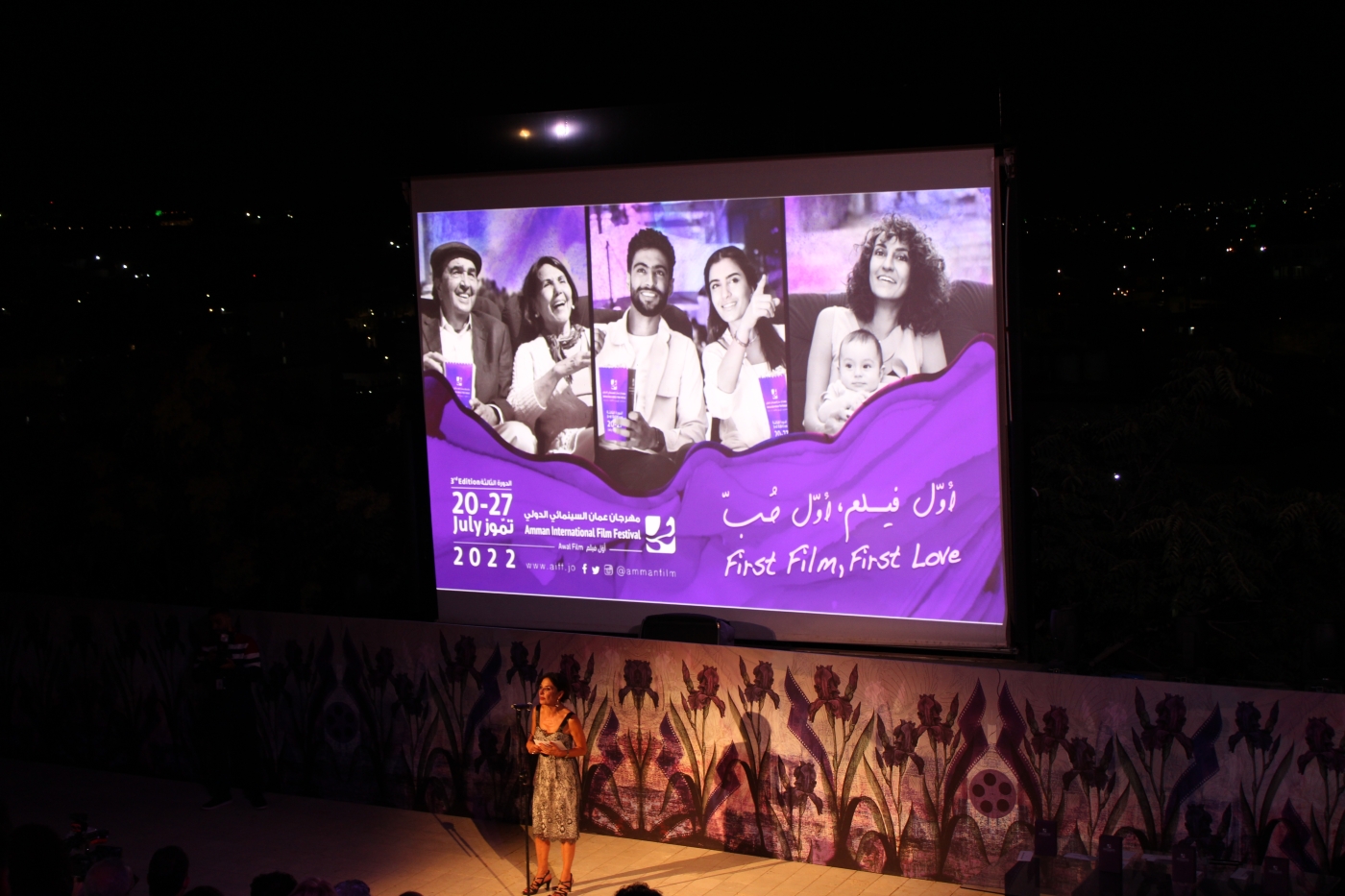 The film festival was a showplace for highlighting new and emerging talent in Jordan (MEE/ Hanna Davis)
By
Hanna Davis
in
Amman, Jordan

The third year of the Amman International Film Festival (AIFF) brought together film talent and enthusiasts to premiere 49 films from 29 countries, a testament to Jordan's emerging role as a major actor in Arab cinema.

The festival ran between 20 and 27 July under the theme "First Film; First Love," and is the only one in the region that focuses on first-time directors in film.

"There is a growing interest in cinema and filmmaking throughout Jordan," Nada Doumani, the festival's co-founder, told Middle East Eye. "The festival is a huge cultural movement."

While Jordan has for decades provided pristine backdrops for blockbuster productions such as Lawrence of Arabia and Warner Bros' 2021 science fiction film, Dune, now there's an even bigger desire to develop the film industry in the country.

"There is really a thirst to watch Jordanian films, to see our stories on the big screen," said Deema Azar, the producer of one of the festival's Jordan-made films, Farha.

Here, Discover takes a look at the emerging talent that made its mark at the festival.

Darin J Sallam, 35, from Jordan, had her first feature film, Farha, screened on home soil at the festival. Her film, inspired by a true story, is about Farha, a 14-year-old girl who lives in Palestine in 1948, the year of the Nakba, the "catastrophe" of the forced displacement of Palestinian Arabs from their homes, Sallam told Middle East Eye.

The story follows Farah, whose father, concerned for her safety when their village is threatened, locks her in a small closet, promising to return.

"It's her journey inside a room and how her dream changes from education to surviving this room,” Sallam said.

Since its world premiere in 2021 at the 46th Toronto International Film Festival, Sallam’s feature has won three awards, most recently the Jury Award at the Malmo Arab Film Festival, held in Sweden in May.

"It is a coming-of-age film about a child who was deprived of her childhood because of something she didn't choose," Sallam said.

"Many Jordanians live this Palestinian story. We grow up listening to these stories; it's something that we relate to," Sallam said, referring to the over half of Jordanians who are of Palestinian descent.

"I always say that we [filmmakers] are storytellers, we have a really important role in this world," said Mohammad al-Dabbas, 22, whose first short film, The Mission, premiered in Jordan during the festival.

In his thriller film, a young man fails in an attempt to steal from a supermarket, and while trying to escape mistakenly runs into a terrorist cell.

The film is about "the rights and the wrongs, how people can make a really bad decision and then they can fix it," he told Middle East Eye.

His film won Special Mention at the festival, one of the two short films to receive an award out of 12 in competition.

Also premiering at the festival was a four-minute animation, Alternative Memory, by 23-year-old Jordanian Leen Abdo. In the animation, Abdo depicts how life can be made easier for loved ones with early-onset Alzeheimer's.

"I showed a son who cares a lot about his mother who has early-onset Alzheimer's," Abdo told Middle East Eye. "He created an alternative memory for her by showing her some old memories and videos of their beautiful moments together."

"I'm really glad the film industry is developing so fast in Jordan," she said. "We have supporting film festivals and many workshops with experienced directors who can inspire young filmmakers."

Abdo hopes to own her own studio, in the hopes to make it big as a filmmaker. "I would like to continue making films to highlight some community issues in my own way," she said.

It was during Jumana Eldur's time as a film student at SAE Institute in Jordan that she found herself "falling in love again with story writing," but it was also during this time that she lost her father, influencing her to write her first short narrative film, Arwa.

"The film is about a daughter and a father, the special moments between them; him talking to her about his music taste, about his philosophy in life... " Eldur said.

"I think it's my way to comfort people who have been through my experience," Eldur said.

The 25-year-old filmmaker said the film has already made it to six festivals, but this was the first time she was present with the audience after the film. "I saw them crying after the film. I talked to them, they asked me questions. It was a unique experience."

Karam Awadat, 29, premiered his first film, Winter, at this year’s festival. "It was a great honour to be part of this festival," he told Middle East Eye. "We were able to get acquainted with important [film] artists and benefit from their rich experiences and ideas."

Awadat's 19-minute film tells the story of a Syrian couple who married without their families' consent due to religious differences. The couple flee the war in Syria to Jordan and end up living in difficult circumstances in Amman.

"I seek to show another side of winter," said Awadat. "Not as we are accustomed to, with its beautiful, romantic details, but from a cruel side, from the refugee families who consider it a great burden."

After receiving a grant from the Royal Film Comission in Jordan last year, Awadat expressed how important it is for more filmmakkers to have sponsors in order to be able to get their work out on the big screen.

"Cinema and film is a huge and important industry that expresses the country's civilisation and thought," he said, emphasising that there are many challenges for young filmmakers in Jordan.

In less than 36 hours, both showings of Zaid Abu Hamdan's first feature film, Daughters of Abdul-Rahman, were sold out.

The film, which had its Jordanian premiere during the festival, tells the story of four estranged and offbeat sisters who are forced to come together to find their suddenly missing father. In their journey, secrets are revealed and the sisters must work together despite their differences.

The story is a protest against a patriarchal society and the social pressures often forced upon women, the Jordanian director told MEE, noting that the idea for his film came following conversations with his mother about the dreams she had given up to follow society's obligations.

"I'm a firm believer that we will only flourish as a nation when we allow space for individuality and embrace differences in other people," Abu Hamdan said. "This film was a scream for the liberation of women and men alike."

The film has won multiple awards in international film festivals, including the Audience Award at the 2021 Cairo International Film Festival, the first Jordanian film to win such an award in “the heart” of the region's commercial film industry, he noted.

Zain Al-Sharaf Wahbeh, a Palestinian born in Jordan, had her three-minute virtual historical journey through the Palestinian neighbourhood of Al-Manshiyya shown at this year's festival.

The 24-year-old architecture student's film is a glimpse into the neighbourhood, once-situated in North Jaffa prior to Israel destroying it in the 1948 Nakba, leaving many being forced to flee their homes.

Wahbeh told Middle East Eye that her inspiration behind the film was to piece together memories of her homeland and allow herself to experience it.

"As a Palestinian who hasn't had the pleasure to visit Palestine yet, I yearn to re-experience parts of my heritage, which are sadly now demolished."

The historical memory begins in the pre-1948 neighbourhood, depicting images of the home and a souk (market), where Arab and Jewish merchants used to work side-by-side, and ends with images of the present day - the "remarkable change in material" from pre-1948 to the present charting "a material tale of annihilation," she said.

The film is somewhat nostalgic for those watching, as it captures the natural sounds of the city, from the background noise of people conversing to children's laughs and the pitter-patter of footsteps.

The festival drew to a close with remarks from co-founder Doumani, who said that they would like the festival to be an annual event.

The festival brought in more than 150 guests from around the world, including directors, producers and film experts, helping to make it an impactful experience for all those involved.

The event concluded with the awarding of a Black Iris Trophy and cash prizes for the best film in each category. These included the Best Arab Feature-Length Narrative award going to director Salah Assaad for her Algerian film Soula, and the award for Best Arab Feature-Length Documentary going to director Abdullah al-Khatib for his Palestinian-Syrian film Little Palestine [Diary of a Seige].

"We are happy with the cultural hype the festival generated in the country... the festival is an incubator for talents and different narratives which speak to our minds and emotions," concluded Doumani. Film
Venice Film Festival 2022: The Middle Eastern movies to look out for 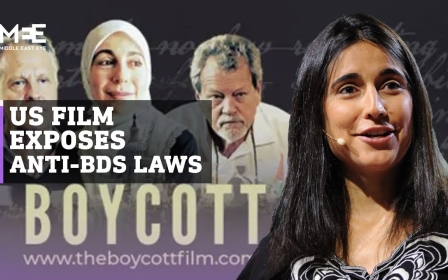