#ArtMubarak: Hashtag celebrates art by Muslims around the world

The founders of a new hashtag aim to showcase the diverse, creative talent of the global Muslim community Thousands of young Muslim artists from around the world have found a new outlet for their work on Twitter through a new and very popular hashtag, #ArtMubarak, which launched earlier this month.

#ArtMubarak - which references the Arabic word "Mubarak" and means "congratulations" or "blessed" - has seen more than 4,000 creative talents come together to share and celebrate their work, which ranges from animations, to drawings, photography, poetry, music and writing.

The hashtag, which emerged earlier this month, was started by two Bangladeshi individuals, Shazleen Khan, an illustrator and comic artist from London and US-based digital illustrator and fiction writer Bushra, who discovered each other’s work through social media.

Hello #ArtMubarak !!!💛 I'm a Palestinian Muslim artist and my love for little wyverns is so so big !! c': pic.twitter.com/QOoBRdzwxi

The two first connected on social media, their initial chats over mutual interests sparking a conversation about South Asians and Muslims in the art space.

For Khan, the main aims for setting up the hashtag were to highlight the work of Muslim creators and to initiate relevant opportunities for them. But they also hoped it would be a way for them to connect with others through shared experiences.

“The community I identified with was connected through a shared Muslim experience, regardless of ethnic background, Khan tells Middle East Eye. "I wanted to have a place to uplift Muslim voices because we’ve not been given the agency until very recently to voice our own stories and to construct our own narratives.”

“I grew up in a very multicultural area, but when I transitioned to studying and then working in the creative industries, I found the space to be overwhelmingly white. And while all the people around me were perfectly accepting, there was and still is a lack of nuanced understanding of POC (people of colour) identities and cultural experiences.”

Khan, who has worked for Bloomsbury press and the BBC, and whose career has gone from self-publishing a graphic novel in 2011 to winning the Broken Frontier Award for the Best Webcomic last year, says success doesn’t always come easy.

In Khan’s experience, since people of colour, particularly those from the Middle East region or South Asian communities, generally tend to be the minority in the UK, this naturally affects their representation in the arts. In comics, she says, there is “very little out there from a Muslim perspective”.

On a global scale however, some are making strides, like Sana Amanat, the creator of Marvel's newest moniker, a Pakistani-American superhero called Kamala Khan, and Egyptian graphic novelist and comic artist Deena Mohamed - her webcomic Qahera features a "visibly Muslim superhero that addresses social issues such as Islamophobia and misogyny".

Sitara Shefta, head of studio at Tenerife-based video game developer, No Brakes Games, says the inclusion of Muslims characters is a significant step in better representation in gaming, where Muslims are sometimes cast in stereotypical roles. “It’s very important, why shouldn't Pakistanis and Muslims have characters and stories that inspire them? …They are usually depicted as terrorists or the villains we fight against in the games,” she said in an interview.

In an effort to address this lack of diversity, Khan and Bushra then created a database for artists to share their portfolios.

Let's try this! One of my goals is to portray strong Muslim women in roles not often seen in art or media. #ArtMubarak pic.twitter.com/71jNoK299r

The database, which is available for all Muslim creatives to access through Twitter, is maintained by Shazleen and Bushra and collects information such as the type of work they do, ethnicity and links to portfolios.

The data will initially be shared between the artists to help them to network with each other, and then with relevant clients at a later stage, so they can have better chances of being recommended or commissioned for projects.

For Bushra, using social media to amplify Muslim voices was a key element in increasing the visibility of artists: “There were people saying they didn’t even know how many Muslim artists existed. I think recognition and representation is an important step for us, but I also think that resources and rights are important elements."

“Simply being visible is not enough, we need material resources so we can continue sharing our art without the fear of financial insecurity. Muslim artists should be sought out for their stories and should be paid for their work”.

“Instead of having this opportunity fizzle out, we would like for other Muslim creatives who are more fitting for the job to be contacted, so that more Muslim voices are elevated in the arts,” she says.

I'm a Game Developer based out of the UK currently working on an Arcadey-Spaceflight Project 🚀🌟😎pic.twitter.com/r2Kky4fdwM

In less than two weeks, over 4,000 people from around the world have so far participated in #ArtMubarak. Artists in Australia, Saudi Arabia, Palestine and Indonesia have joined in. Some have used the hashtag to promote their portfolios and online businesses, often touching on the inspirations and goals they hope to achieve with their work.

Maha Yassin, a Sudanese digital artist living in Egypt, used the hashtag to share her work, which draws inspiration from her culture and issues she feels passionate about.

Her illustrations also include digital drawings related to the Black Lives Matter movement as well as the Sudan protests, the latter inspired by the #BlueForSudan hashtag that swept social media in June 2019.

Hala #ArtMubarak 🙌🏾✨ I'm Maha, a Sudanese 🇸🇩 digital artist/illustrator living in Cairo. I love drawing people from my culture but also a ton of fan art!
I recently got myself an Inprnt shop
✨https://t.co/dbrS7XQRyd✨ pic.twitter.com/g7FPhzGUOL

For Ghada, a graphic designer and photographer, her passion was related more to the human body. Her art often features curly-haired, young women - with one post getting more than 5,000 likes.

She has also started her own online business showcasing her illustrations, from prints to T-shirts and tote bags, all celebrating “the beauty of curly hair”.

Alaa Musa, a Muslim doctor and artist from Sudan, used her art to focus on her experiences as a junior doctor. On her website, Musa describes working as a doctor as a chaotic jungle, where resources are limited and expectations are high.

Her illustrations are based on true events, capturing work at one of Sudan’s largest children’s hospitals. Musa’s art - which includes illustrations on how she felt the first time one of her patients died and other dilemmas she faces while on the job - have received nearly half a million views.

Hello #ArtMubarak!
I'm a Muslim artist and doctor from Sudan 💜 I love making comics about my life in the hospital, check it out here!https://t.co/P3yJzQMkG9 pic.twitter.com/fzRaNOnaf0

Many of those who have participated in the hashtag have reached large audiences as a result of it.

Twenty-one-year-old digital illustrator Hanna’s post includes drawings of strong female figures and characters dressed in modest clothing and hijab. The Indonesian-American artist has had over 2,000 likes on her post, which she describes as portraying "Muslim magical girls".

Twenty-two-year old artist Javeria from India also chooses to represent women wearing the hijab, which she shares on her dedicated Instagram page.

She regularly updates her followers on progress pictures of her art and snippets from her sketchbook. Some of her work includes empowering messages, such as "let women choose for themselves", referencing the right for women to be able to dress as they choose, and a post marking Muslim women’s day.

Inspired by Yemen and the culture of the Middle East, Noor Ali,  from the US shares illustrations that represent her heritage. Her illustrations include Yemeni traditional clothing , foods as well as women in hijab. One of her projects, 'Prints for Yemen' included selling prints, with the proceeds going towards supporting humanitarian work in Yemen.

I’m a Yemeni American artist and I create art to share the beauty of my culture 🤍 IG:noors_nook #ArtMubarak pic.twitter.com/V1Ml9SA2Tt

Influenced by Palestinian heritage, digital illustrator Yasemin shares typography, drawings and comics with her followers. Her work ranges from a comic referencing  an excerpt by the famous Palestinian writer Mahmoud Darwish to political statements calling for the end of the occupation of Palestinian land.

Like some of the other artists who have shared their work using the hashtag, Yasemin has created an online business where she sells prints, clothing items, mugs and household items inspired by her activism, with a portion of the proceeds going to humanitarian aid in the Gaza strip.

Salaam #ArtMubarak
Im a Palestinian artist living in Germany✌🏽🇵🇸
My art is mostly political rage mixed with the beauty of nature and pretty women😌
Follow my instagram for art only: https://t.co/8x9IToNMpm pic.twitter.com/D0xwYTJvzx

Among the contributors to the hashtag was Farah Naz Rishi, a Pakistani-American writer and voice actor who dabbles in video gaming.

Her debut young adult novel, I Hope You Get This Message, is about three teens who must face the mistakes of their past after they learn that life on Earth might end in less than a week.

Following on from the success of the hashtag, Bushra maintains that it is crucial people continue to listen to and make space for Muslim creatives.

“We are always fighting to have our voices heard and our opinions represented in a nuanced manner, but we cannot do this alone," she says.

The hashtag is still going strong, with artists continuing to share their work on it. In the meantime, both Bushra and Khan continue to develop the database, and their own personal projects.

“My current ongoing comic is about community found between diasporic Muslim groups in a Middle Eastern setting" Khan says.

"My hope is that when it’s read, it emulates the feeling of coming home and sharing a meal with your friends and family.”

For Bushra, the hashtag has been a fulfilling project which has garnered a very positive response from the community and beyond.

“It has been an honour to work on an event like this with Shazleen and uplift fellow Muslim voices in the art community. I’m looking forward to seeing new artists join future ArtMubarak hashtags.” 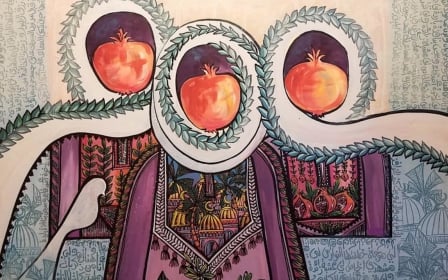 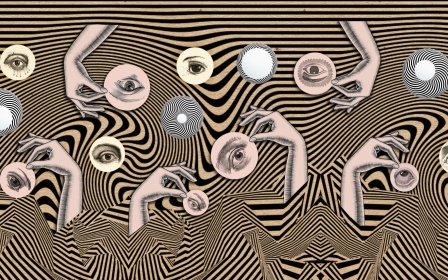