How football supporters in Glasgow, including Primal Scream's Bobby Gillespie, are backing a team in Palestine 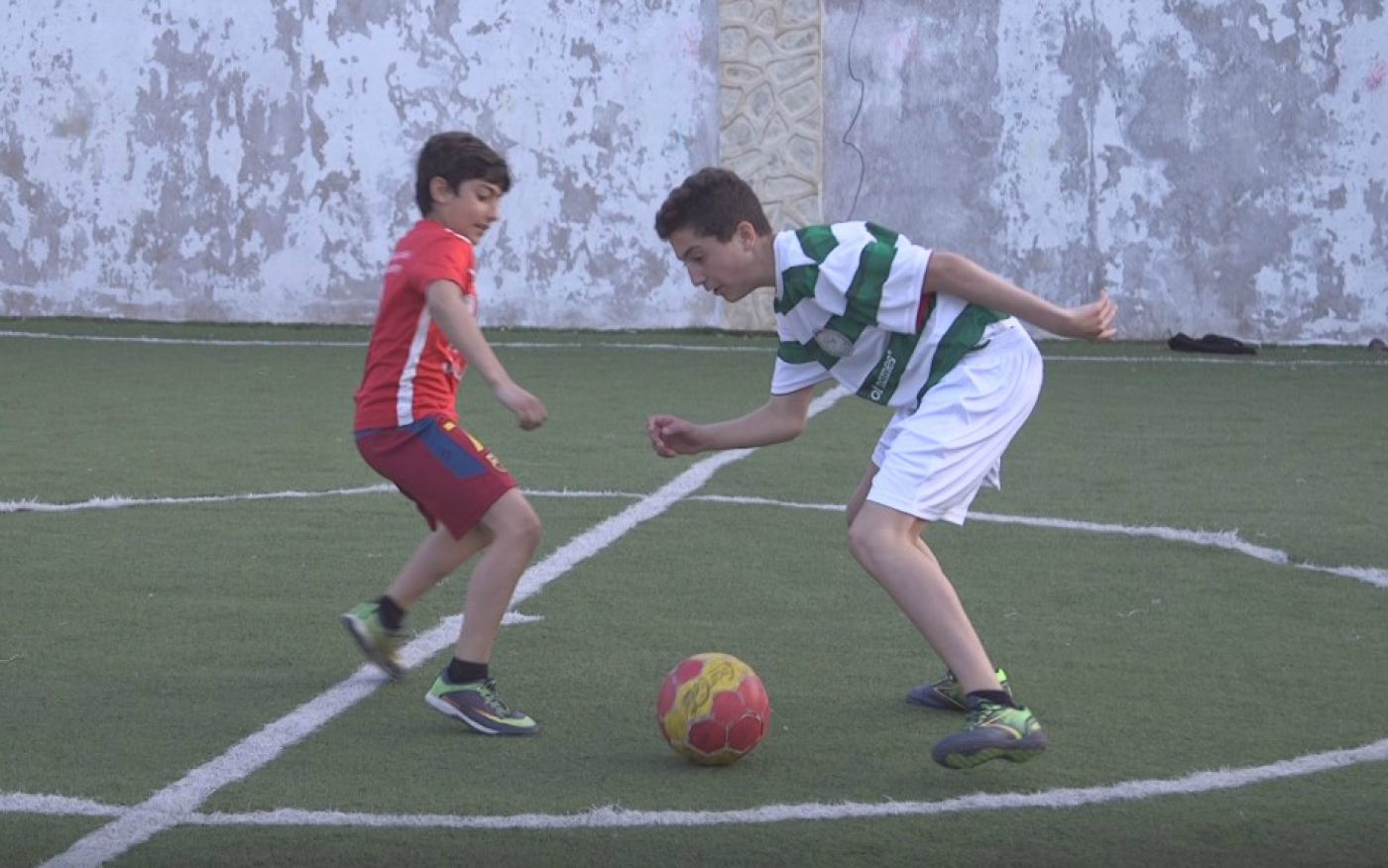 It’s a sight familiar around the world: teenagers jostling, tackling and laughing during a kickaround on a warm summer’s evening.

But this is no ordinary place for a game of football. Nor are the spectators confined to the small group of youths sat on benches along the perimeter of the pitch.

The match, and every movement of the players, are also being closely watched by heavily armed soldiers from watchtowers, spread along the imposing eight-foot-high wall which surrounds the area on three sides.

It faces almost daily incursions from the Israeli army, which has illegally occupied the rest of the West Bank since 1967 and besieged Gaza through a blockade. In 2017 it was also named the most tear-gassed place on Earth by a University of California, Berkeley study: not exactly ideal conditions for a game of football.

But while Aida Camp is just north of Bethlehem, the players’ green-and-white hooped strip is inspired by a city and a football club many thousands of miles away.

A club from the East End of Glasgow, who have, repeatedly, expressed support for Palestine and are doing so again with an initiative on behalf of the Lajee Centre, a grassroots creative and cultural centre for young people in the camp. The result is Aida Celtic, a Middle East team with strong links to one of Europe’s best-known teams.

Matthew Yousif, one of the Glasgow-based organisers of the initiative, says: “This project was born from an act of solidarity which gained global support. From a football match in Glasgow to the formation of a team in Bethlehem, we want this grassroots initiative to have a lasting legacy."

Aida refugee camp is on the frontline of Israeli expansion and incursion. The wall is divisive, separating Palestinian children from a large open space where they used to play. It is also surrounded by a matrix of settlements, deemed illegal under international law, that Israel has built to connect and expand its territorial hold on Jerusalem.

Even indoor spaces where young people gather to learn, play and be educated are raided by the army. Safe places don’t exist in Aida Camp.

One of the few escapes for the youngsters in Palestinian camps is football – but that too can be fraught with peril, even at the top of the game.

The career of Mohammed Khalil of Al-Salah FC, based in Gaza, ended when he was shot in both knees by an Israeli army sniper last April.

In 2009, international Palestinian striker Mahmoud Sarsak was imprisoned and tortured by Israel for three years without charge or trial. He undertook a 96-day hunger strike before he was eventually released, amid calls from Amnesty International, Noam Chomsky and Eric Cantona among others that he be freed.

There are also the daily obstacles - such as Israeli checkpoints, obtaining permits to travel, and power - which make it a struggle to simply participate in a competitive sport while living under Israeli military occupation.

“The Palestinian football community is very affected by the occupation through segregation and division,” says Mohammed Alazza, a coordinator of the Lajee Centre.

He explains that the teams in Gaza, the West Bank and 1948 Palestine - the parts of Palestine which now form Israel - all play in different leagues.

“So many footballers dream of playing for a bigger team but they’re refused the opportunity to travel and build on their careers. Financially it’s also hard for football clubs to maintain facilities and training while under occupation.”

Why Celtic fans back Palestine

In August 2016, Scottish Champions Celtic played against Israeli team Hapoel Be’er Sheva in a Champions League qualifier. Before the two-legged tie, UEFA, European football’s governing body, warned that any political symbols at the game would result in a severe punishment for the club. Celtic had been fined a few years previous when left-wing ultras the Green Brigade displayed a banner depicting the Irish hunger striker Bobby Sands.

But in a display of solidarity and defiance, Celtic fans - led by the Green Brigade -  brandished hundreds of Palestinian flags. The club was fined by UEFA – and its supporters, instead of raising money to pay the fine, launched #MatchTheFineforPalestine.

Supporters raised £176,076 (just over $232, 518) to be split between the Lajee Centre and the charity Medical Aid for Palestinians, which has also received backing from the British government and the EU.

The reason for Celtic fans’ support for Palestine is, in many ways, rooted in the birth of the club itself.

It was founded in 1887 to raise money for poor Irish immigrants in Glasgow, who lived in dire poverty and suffered hunger and destitution. The community was also discriminated against by a Presbyterian Scotland which was hostile to the mass influx of largely Catholic immigrants from across the Irish Sea.

In November 1887, at St Mary’s Church in the East End of Glasgow, a priest known as Brother Walfrid stood up and announced that “a football club will be formed for the maintenance of dinner tables for the children and unemployed”.

Irish Catholics were very much the underdogs but through Celtic they soon had a football club that could match any in Scotland, if not Europe (in 1967 the team were the first British club to win the European Cup).

That experience, of being part of an oppressed community, has never been forgotten - and Palestinian flags have been a common sight at the stadium for decades, including during Palestinian hunger strikes in 2012.

For Bobby Gillespie, lead singer of the band Primal Scream and renowned Celtic fan, the link goes even deeper to the radical history of Glasgow.

“The people of Glasgow have a long and proud tradition of showing open solidarity with oppressed peoples and anti-colonial struggles,” Gillespie tells Middle East Eye.

“Look at John McClean and the Red Clydesiders support for the 1917 Bolshevik Revolution or the many Glaswegians who joined the International Brigade to fight Franco and fascism in Spain in the 1930s, or the trade unionists of the 1970s who gave shelter to Chilean refugees on the run from Pinochet’s fascist thugs.

“The Green Brigade’s support for Aida Celtic and the Palestinian struggle for human rights and self determination continues that tradition.”

The shirt of hope

When Celtic fans waved the flag for Palestine in 2016, there were many who argued that football and politics should remain separate. But in the narrow alleyways of Aida Refugee Camp, everything is political.

Three years on, the link between the Green Brigade and the camp has developed into Aida Celtic, a football academy representing the camp and an offshoot of the Lajee Centre.

The academy plans to create two teams, one for juniors aged 12-15, the other for those aged 16-plus. The aim is to provide the footballers with a fully equipped and financed football setup so they can maximise their potential against all the odds.

The organisers hope it is just the beginning. “The project is a way of building on the funds raised during the Match the Fine for Palestine campaign,” says Yousif. “Working alongside the Lajee Centre we want the team to flourish, to provide an outlet in the camp for the youth to play football under the intense pressure of the occupation.”

A strip, designed specifically for the team, has also gone on sale, with all profits supporting football activities at the camp. It’s hoped it will create a lasting legacy and be a regular source of finance for the centre.

The makers of the strip are London-based streetwear agency ‘a number of names*’, a company more used to distributing designer brands such as Billionaire Boys Club than football kit for a team in Palestine.

Craig Ford, the company’s founder, says that when he heard about Aida Celtic, he felt compelled to become involved, and is donating the first batch of strips which have gone on sale.

“Anytime I tell someone the story, they’re moved,” Ford says. “I’ve been moved to tears telling someone the story. I actually grew up a fan of [Celtic’s arch rivals] Rangers but I was also brought up to stand in solidarity with oppressed people worldwide, like the Palestinians.

“I’ve always been into clothes so it’s great for me to be able to do something with them to help this. It’s the best thing I’ve ever done in my life.”

Alazza hopes that the formation of the team will draw attention to the struggles they face.

“This is a very important step from fans of a very famous football club,” said Alazza. “The launch of Aida Celtic is a way to build awareness and this connection highlights the support for Palestine among football fans, not only in Scotland and Ireland but all over the world.

“It has opened eyes for people to question what is happening in Palestine. Young people now go from Glasgow to Aida Camp and [also the] other way around, so there is a huge connection." 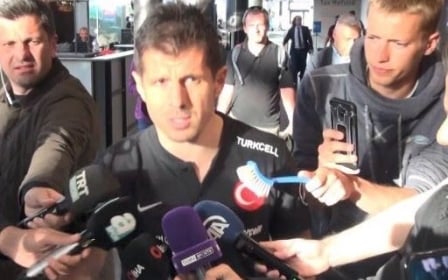