Once 15 times more valuable than gold, the colour purple extracted from sea snails made the Phoenicians rich traders 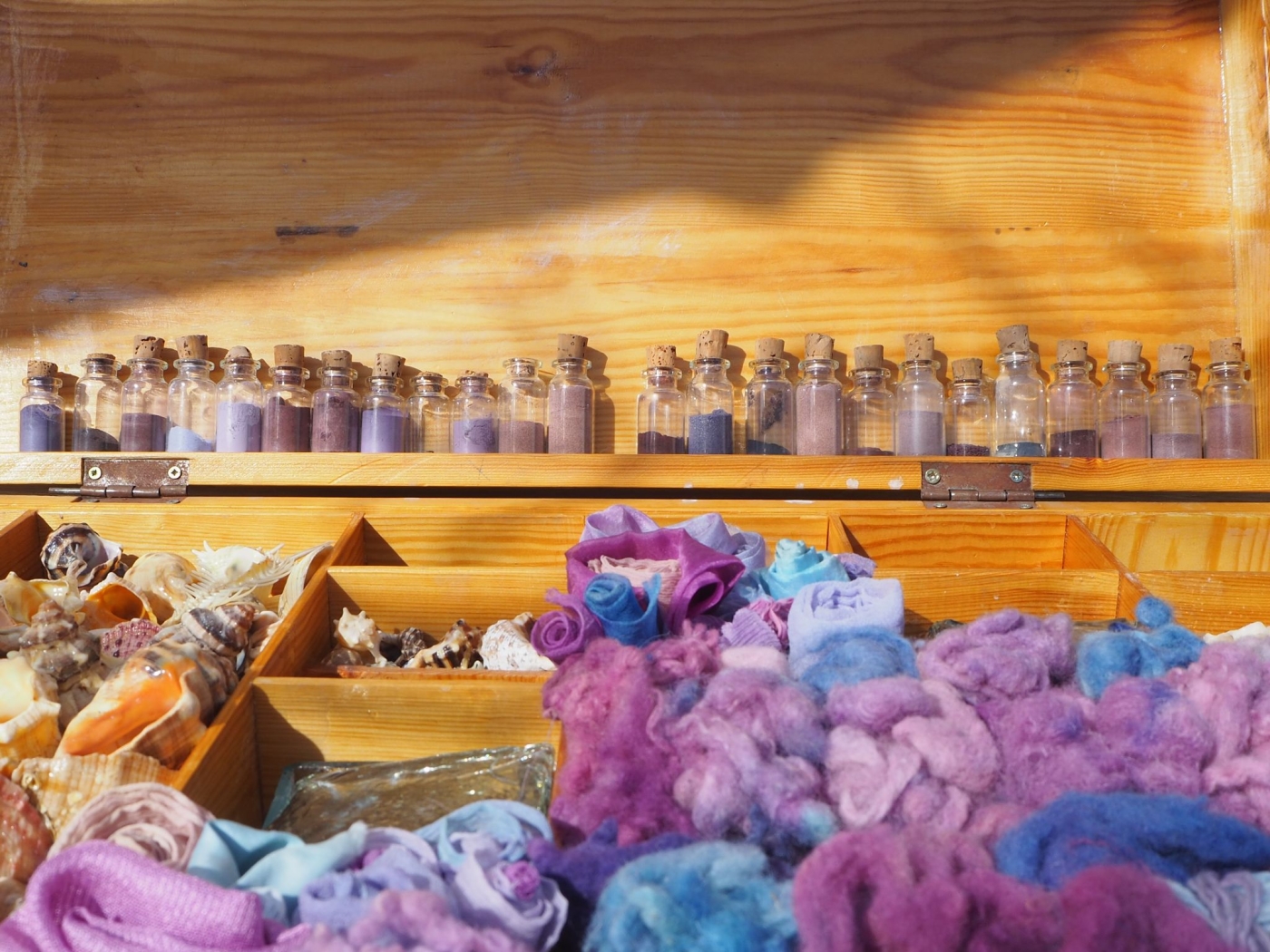 Poking his head out of the tiled garden outhouse in a Tunis suburb, Ghassen Nouira tells Middle East Eye, with a grin, how his work producing purple dye powder using millennia-old methods nearly cost him his marriage.

“[She] threatened to divorce me because of the terrible smell my work generates, so my dad gave me his shed, in a desperate attempt to save my marriage.”

Nouira's little shed is a microcosm of the world of purple dye once inhabited by the Phoenicians, the ancient civilisation which spread across the shores of the Mediterranean Sea between 2,000 BC and 300 BC.

It takes 120 pounds of snails to make just one gram of pure purple dye powder, in a labour-intensive process mastered by the Phoenicians, who produced it in commercial quantities to trade across the Mediterranean and beyond.

They popularised the purple dye, extracted from the Murex mollusc - a predatory sea snail with a dye-producing gland.

Some 4,000 years later, Nouira is one of just a handful of people worldwide known to be extracting purple dye from the Murex using traditional methods.

And his 12-year obsession with reproducing Tyrian Purple (also known as Imperial purple), the most valuable shade in ancient times, has been a smelly one.

The endless cleaning of snails, which inhabit the muddy ocean floor, the extraction and drying of their dye-producing gland and his experimental dyeing activities all generate an overwhelming stench.

Generally disinterested in history at school, one lesson about the Phoenicians struck a chord with Nouira. “When the teacher was talking about the Murex, I thought, I know those snails, they stink, but how is it possible to make dye from them?” he recalls.

“It stuck in my mind, that weird idea of getting colour from a snail.” Some 13 years later, he glimpsed what had so inspired the Phoenicians.

'I had a flashback to that history lesson, and took the Murex to some local fishermen'

“I had just come back from my honeymoon and, walking on the beach, I saw a small, dead Murex with a hole in its shell. The sun was shining on it and there was this gorgeous red-purple colour,” he tells MEE.

“I had a flashback to that history lesson, and took the Murex to some local fishermen. They said there was an abundance of them in Tunisian waters, and their spiky shells meant they got caught in nets very easily.”

With few mentions in historical texts about Phoenician dyeing techniques, Nouira found himself with a bag of snails but no idea where to start. “I crushed them but nothing happened. I was very upset, so I dumped them in a plastic bag with the rubbish,” he says. “For some reason, I opened the bag later and it was all purple. I hadn’t realised the dye needed time to develop.”

He then started experimenting until he located the Murex’s dye-producing mucus gland. Searching for other enthusiasts or practitioners online, he could only find a handful, including a Japanese scientist and a French painter.

“Actually, no-one could give me any advice because so few people were doing it, so I had to go it alone, learning the hard way,” Nouira explains. After two years of experimentation, he produced his first pigment powder.

First, shells have to be crushed individually and the gland torn out. Although the gland is white with colourless liquid, when coated in salt (to absorb the liquid) and exposed to sun and air, it starts to oxidise.

In a process lasting around 45 minutes, the texture thickens and the gland secretion changes colour - from yellow, to green, to blue and, eventually, to purple. The glands are then cleaned and placed on a glass sheet away from direct sunlight which, at this stage, would blacken them, spoiling the dye potential. These dried glands can be stored for decades for future use.

Pure pigmentation production is even more complex, involving endless scraping and filtering, before the concentrated pigment is dried and ground down, and the fine powder then carefully cleaned of any tiny remaining shell fragments.

Nouira describes the process as “painstakingly slow”, with a 12-hour day producing a mere quarter of a gram of pigment.

“One gram allows you to dye 10-15 grams of fabric (the sleeve of a shirt), and that’s why the dye was, and still is, so expensive,” he explains.

“In antiquity, people didn’t have entire royal robes in purple, just bands and stripes. The wealthier they were, the wider the stripe of purple, but that would only be reserved for the wealthiest and most powerful.”

In an era of environmental awareness, the process of sacrificing so many snails for such a small quantity of dye may seem cruel, but Nouira’s family eats all the snails he uses, and he has amassed a stock of recipes he insists are delicious.

“Nothing is wasted. My family eats all the snails after I have removed the glands. I can also bake the shells in large pottery furnaces, then grind them, which results in a very high-quality lime, that can be used as a building material, as a base for Purpurissum (purple paint pigment), makes an excellent fertiliser for acidic soils, and can even be reused instead of soda in dyeing processes,” he says. “And all this from a simple snail.”

During his 12-year  journey of experimental extraction, drying and dyeing techniques, he has tried to replicate methods used by the Phoenicians, and his expertise has led him to be an exponent of natural dyes and a promoter of the Phoenicians.

“Many people know about the Phoenicians and their discovery of, and trade in, the purple dye. However, very few people have any idea just how sophisticated the processes are and the variations in colour that are possible,” said British adventurer Philip Beale.

Beale himself has just led a successful expedition sailing a replica Phoenician vessel from Tunis to America, proving the ancient civilisation could have made the journey thousands of years before Christopher Columbus. “Ghassen has studied the processes involved for over a decade and, as a result, we now have an excellent understanding of this ancient craft.”

Nouira now runs workshops across Tunisia, for schools, museums, organisations and at historical or cultural events. He lugs a huge wooden box containing dozens of dye samples (in both powder and cloth form), dried Murex dye-producing glands, shells and tools, along with assorted implements with him. And his lectures and demonstrations encourage hands-on participation.

This, he believes, is how history should be taught.

A rich and colourful history

“[The Phoenicians] were geniuses,” Nouira says. “The chemists of the ancient world, yet working with the most basic means.”

Their brilliance was proved by their ability to produce consistent shades of Tyrian Purple - a deep red-purple shade that was once 10-15 times more valuable than gold - in commercial quantities, most likely involving a large team working around the clock.

'Because Romans tried to erase Phoenician culture after they defeated the Phoenicians and conquered Carthage in 146 BC, little evidence remains of their dyeing process'

“The original Phoenician colours lasted forever. The older Tyrian Purple gets, the more robust the colour becomes and, if exposed to sun, the colour only deepens,” he says, explaining that a 2,500-year-old horse-trapping found in Iran, “looked as fresh as if it were dyed yesterday”.

“They scanned the whole Mediterranean looking for Murex and, where they found them in abundance, they’d consider that spot as a good place to stay and build a dye-making facility.

"By the 10th-century BC, there were hundreds of these production centres, and the largest were Tyre, Sidon (both in modern-day Lebanon) and the ancient city of Meninx in Djerba (Tunisia),” he says.

"We have good reasons to believe that the purple dye from Meninx was not exported as such, but was used locally to dye textiles, which were then sold further afield."

But, because Romans tried to erase Phoenician culture after they defeated the Phoenicians and conquered Carthage in 146 BC, little evidence remains of their dyeing processes, apart from a description by Roman author Pliny the Elder (23-79AD) on the colour purple but not the methods.

German archaeologist Stefan Ritter, part of a German-Tunisian worked on the site until 2019, told Archaeology News Network that Meninx’s prosperity was based on the production of purple dye. Nouira, who visited the site, said the digs had also unearthed industrial quantities of Murex shells.

After the demise of the Phoenicians, purple dye continued to be produced by the ancient Greeks and Romans, as well as the Byzantines. These ancient civilisations’ demand for the colour purple and thousands of years of overfishing brought the Murex population to the brink of extinction.

Dye production only ceased when the Ottoman Turks took Constantinople - the last purple dye production centre - in the 15th century AD. Nouira says maybe this was because green was the favoured Islamic colour, but that, whatever the reason, it ensured the survival of the Mediterranean’s Murex population.

Even now, off the coast of Lebanon, the population is apparently severely diminished. “In history, there was tremendous over-harvesting of the Murex but today there’s horrendous pollution spilling into the waters and killing sea-life,” Nouira says.

“The Murex are very sensitive to their environment and changes to temperature or food supplies mean they move en masse elsewhere.”

Less in demand, but no less valuable

Nouira does not consider himself to be a businessman or the owner of a famous dye brand, yet he is making a name for himself, mostly via his Facebook page ‘Phoenician/Carthaginian Purple Dye,’ and sells dye powder worldwide.

These souvenir boxes, which tell the story of purple dye in one kit, he says, have broader cultural appeal than just to dyers, helping promote Carthaginian and Phoenician culture and history, as well as natural dying methods, around the world.

Father of three Nouira fits his passion for the colour purple around a full-time day job managing a unit in a market research company, with dye sales helping to cover research and production expenses.

To date, he has sold dozens of boxes across five continents, with customers including several priests and rabbis.

Many of his Christian customers have made reference to a Biblical quote that says that Christ "was clothed in purple" before the crucifixion [Mark 15:17]. Noting that Jewish customers are more interested in the colour blue, Nouira says he loves the cross-cultural nature of being a Muslim dyer selling this traditional dye to Christians and Jews.

Regardless of outside interest, his passion for the colour purple remains an intensely personal one.

“Every day, I thank God for this blessing, which has changed my life in so many ways,” Nouira says. “And, even after 12 years’ experience, it is still a magical process because I never know exactly what colour each batch will produce.” 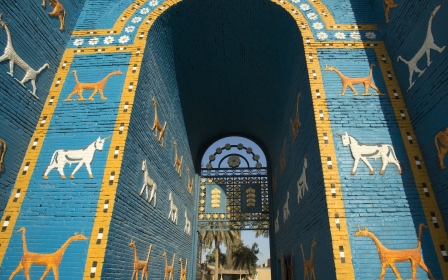