Sofreh aqd: An inside look at Iranian weddings

Newlyweds will dip their fingers in a bowl of honey, and have sugar sprinkled above them to bless them with a sweet life 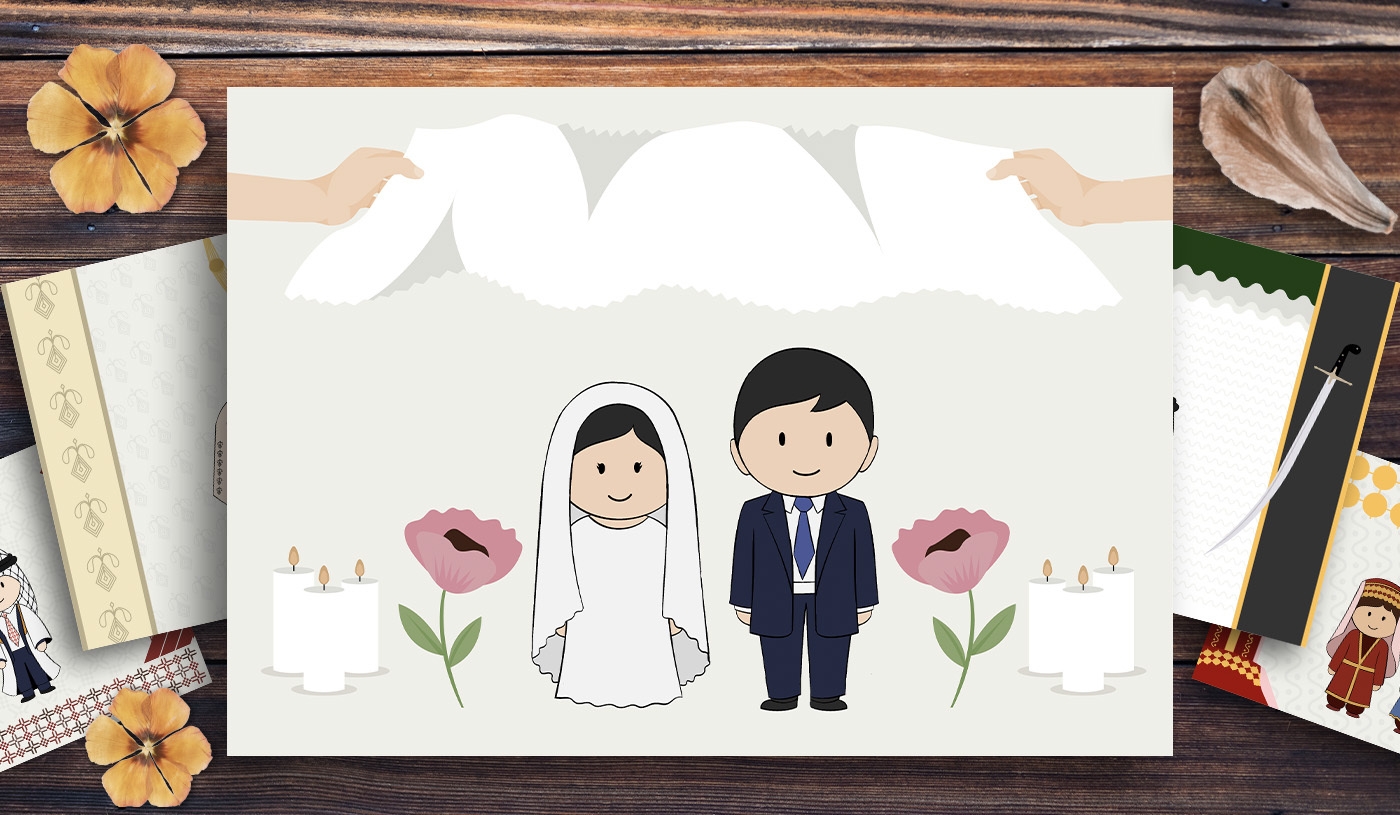 Although Iranian weddings vary from family to family, there are some key traditions which feature in almost all weddings (Illustration/MEE)

A large mirror shimmers in the light, surrounded by gleaming candelabra. The couple’s faces are reflected in their glow. Before them, on an elegantly curated spread, are bowls of seeds and spices - frankincense, tea, poppy seeds, and esfand (wild rue) - along with fruits like apples and pomegranates in decorative bowls. 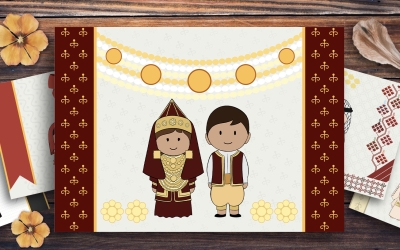 Tasdira and tiaras: An inside look at Algerian weddings
Read More »

This is the "table of commitment", also known as sofreh aqd, and sits at the heart of Iranian wedding rituals. The spices and herbs protect from the evil eye. Eggs and nuts represent fertility and abundance, while coins represent prosperity. Pastries point to the sweetness of a shared life, and the mirror and candles represent the bright future ahead.

Some Muslims will include a Quran on their spread. Others place a book of mystical Persian poetry like Hafez or Rumi. Other religious groups use their own scriptures, like a Torah, Bible, or Avesta, often alongside Persian poetry.

Many see it as a living Persian poetry, with each element symbolising the couple’s happy life ahead.

Although Iran is a diverse country, and every family celebrates weddings differently according to their ethnic, cultural and religious group, there are some aspects that are common throughout all weddings.

Here, Middle East Eye explores what happens at a traditional Iranian wedding as part of a series on wedding traditions from around the region. Stay tuned for the next part, which will be published next week.

For most Iranian families, before the wedding planning can start, the families must meet, and the young couple-to-be allowed to court. Khastegari (courtship) refers to a process by which a family looks for a suitable partner for their child.

Meetings are arranged between families and potential partners. In the initial meeting, the groom’s family often brings flowers or sweets, and the potential bride emerges to serve them tea.

While in the past potential partners had limited say, today people may meet dozens of partners over many years before picking someone, a decision made following several meetings.

For others, khastegari is a formality. “Some couples may know each other for years,” explains Roya Adib, a wedding planner. “But when it comes time to get married, they will still go through the khastegari process.” She estimates that among couples she is familiar with in Tehran, 40 percent meet through khastegari, while 60 percent know each other independently.

Historically, weddings in Iran would last a week, with jashn va paykoobi (celebrating and dancing) every evening up until the wedding to the sound of instruments such as sorna, zar, and dombak. However, more recently, it’s more common for a wedding to last a single day.

One of the initial steps before the wedding is the baleh boroon, or "getting the yes". Here, both families give their consent to the upcoming nuptials. The event is an important part of the wedding process, because not only does it allow the couple to get to know each other further, but it is also where the mehriyeh  (prenuptial agreement) is decided.

At a gathering in the bride’s family home, the groom’s family will come bearing gifts. Soon after, elders in the family will discuss the mehriyeh, which refers to a gift the groom gives the bride in a divorce, comparable to a prenuptial agreement.

Traditionally, mehriyeh was denoted in gold coins. In different cities, different traditions govern it; for example, in Esfahan it is common to include land, while for others, specific numbers are chosen for symbolic reasons.

“In the past, the bride’s family might say the mehriyeh should, for example, be 1,370 gold coins because the bride was born in the year 1370,” Adib explained, referring to the Iranian calendar date corresponding to 1991/2 CE. With each gold coin worth hundreds of dollars, mehriyeh could become astronomically high. “People would get into big fights, even leading to the wedding being cancelled.”

With the rise of divorce in Iran, mehriyeh has become a major burden for men, sometimes pushing them into deep debt. The Iranian government has even set laws that regardless of what is mentioned in mehriyeh, an ex-husband can only be asked to pay up to a certain amount (for the upcoming year, it’s 110 gold coins, each currently worth around $400).

Melika, a student originally from Tehran who married a few years ago, added: “Some women also use the opportunity to add guarantees into the contract, like for example the right to work or study, custody over children, or specifications over where the couple will live.”

At this stage, other arrangements are also made for the wedding, including the couple’s future home and costs of the wedding. Traditionally, in Iran, the home is bought by the groom’s family, while everything in it comes from the bride’s side. However, today, couples will try and split things more equally to make it less of a financial burden on one person.

After the details pertaining to splitting the wedding costs are ironed out, comes the Bale Boroon, the occasion where the date and time of the engagement and marriage are set.

Some dates are avoided; for example, Muslims avoid marriage in the Islamic months of Muharram or Ramadan, while Christians avoid March or early April to get around Lent prohibitions on eating meat. Some clerics may investigate astronomical or astrological calendars for fortuitous dates and suggest them to the couple.

In the past, the hana bandoon, a centuries-old pre-wedding ritual where henna is drawn on the bride and groom, was an important occasion. Often, the designs would include symbolic images, including sparrows, trees and flowers.

At this ceremony, the groom’s family will carry large trays piled high with sweets, nuts and gold above their heads to the home of the family of the bride. A band would play and the men would dance in the courtyard of the home, as women went up to the rooftops and watched. Women will also paint the bride and themselves with henna in preparation for the wedding.

Today, however, this ritual is becoming less common, and women will instead choose to take their bridal party to a salon the night before the wedding to get ready while indulging in an array of sweets and tea.

In the Ahwaz region, an Arab-majority area in southwestern Iran, the bride’s arrival is marked by yazle, where people will dance in a circle and fire guns into the air. Among Qashqais, a nomadic Turkic group in central Iran, the bride is brought in a large parade to the home of the groom’s family.

It is common for there to be two separate ceremonies tied to the wedding: aqd, the engagement ceremony, and aroosi, the wedding itself.

The engagement occurs soon after the proposal has been accepted. After the engagement, the couple is legally married.

At this point, some couples will choose to live together in a rented apartment. They often wait to have the wedding itself until they have enough money for both the wedding and for their own home. Others will put off weddings for years until they feel more financially stable to throw a big wedding.

The sofreh aqd is the main feature at the engagement, as well as at the wedding itself.

A typical Iranian wedding is rich in symbolism.

On their wedding day, the couple will be seated in front of the sofreh aqd, and will dip their fingers in a bowl of honey before feeding it to each other, to signify the sweetness of their lives together.

Throughout the wedding, female relatives of the couple may hold a white cloth above the couple. While holding this, they take two sugar cubes and rub them together above the couple, blessing them with sweetness.

The couple’s religion also informs many of the rituals that play out on the day itself.

Tannaz Sassooni, an Iranian food writer in Los Angeles, explained to Middle East Eye that Persian Jewish weddings include the signing of the ketubah, a religious marriage contract, done with immediate family and a witness in a separate room right before the ceremony.

The Jewish cantor, a religious singer, recites the Sheva Brakha - the Seven Blessings - which are derived from Jewish holy texts. These are pronounced according to Mizrahi (Middle Eastern Jewish) norms, following Iranian or Iraqi standards depending on the couple’s family origin

“In Iranian Jewish weddings in LA,” Sassooni told Middle East Eye, “the music is extremely lively. The bride often walks down the aisle to Persian dance music while people cheer and clap and join her.”

At the end of a Jewish wedding, the groom smashes a glass and - in a tradition shared by Iranians of all faiths - attendees loudly and proudly ululate.

The wedding will culminate with dinner and dancing, including richly flavoured and lavish spreads.

“For the dinner, Iranians prefer heavy dishes,” Adib explains, who has had plenty of experience planning weddings.

“Baghali polo ba mahicheh - fava bean rice with lamb shank - is a key wedding food, along with chicken and lamb kabobs. People also like stews like fesenjan - a walnut and pomegranate stew.”

These dishes have remained largely unchanged in Iranian weddings for many years, however, these days some add innovations into the mix: Sassooni says that a sushi cart is a not uncommon appearance at Persian weddings in Los Angeles.

After dinner, of course, comes dancing. Depending on how religious the family is, the attendees may be split into men's and women’s groups. It is also common for weddings to be celebrated together.

Iranian weddings tend to be very large affairs, with guest lists up to 1,000 people not uncommon. “You have to invite a lot of people to your wedding because it’s a chance to reciprocate the fact that you’ve been invited to other people’s weddings in the past!” Melika told MEE, mentioning that her own had 1,200 guests.

Despite the grandeur of Iranian weddings, the double hit of US sanctions and the coronavirus pandemic have taken its toll on weddings, forcing people to curb their size. As a result, some will cut back on some of the more expensive traditions.

Following the wedding celebrations, family members will often accompany the newlywed couple to drop them off to their new home.

In a convoy of cars, they’ll leave the wedding venue in a ritual known as aroos keshoun, where friends and family will honk loudly and get out of their cars to dance along the street.

In some families, it is customary for them to enter the new couple’s home to inspect the home and furniture.

Usually, one day after the wedding is the pa takhti, where relatives come over to the house of the bride’s family. Today, these additions are seen as somewhat invasive and exhausting, especially following the days of preparation leading up to the wedding. Many replace it by going as a couple to visit close family members in the weeks following the wedding.

As these rituals make clear, while Iranian wedding ceremonies are rooted in age-old traditions, they are also constantly adapting and changing with time. 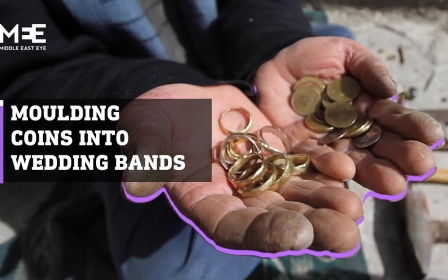 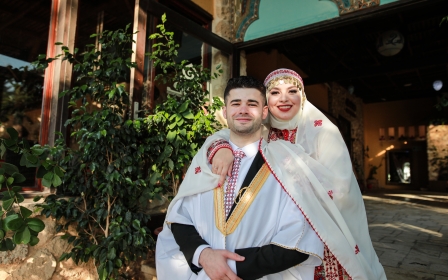 Culture
In pictures: 'Bringing happiness to our hearts' - the joy of a Palestinian wedding