Qahwah House: A Yemeni cafe bringing New Yorkers together, one sip at a time

'It's not a mosque. It’s not a community centre... It's just a coffee shop, but that's what makes it special,' says one coffeehouse regular 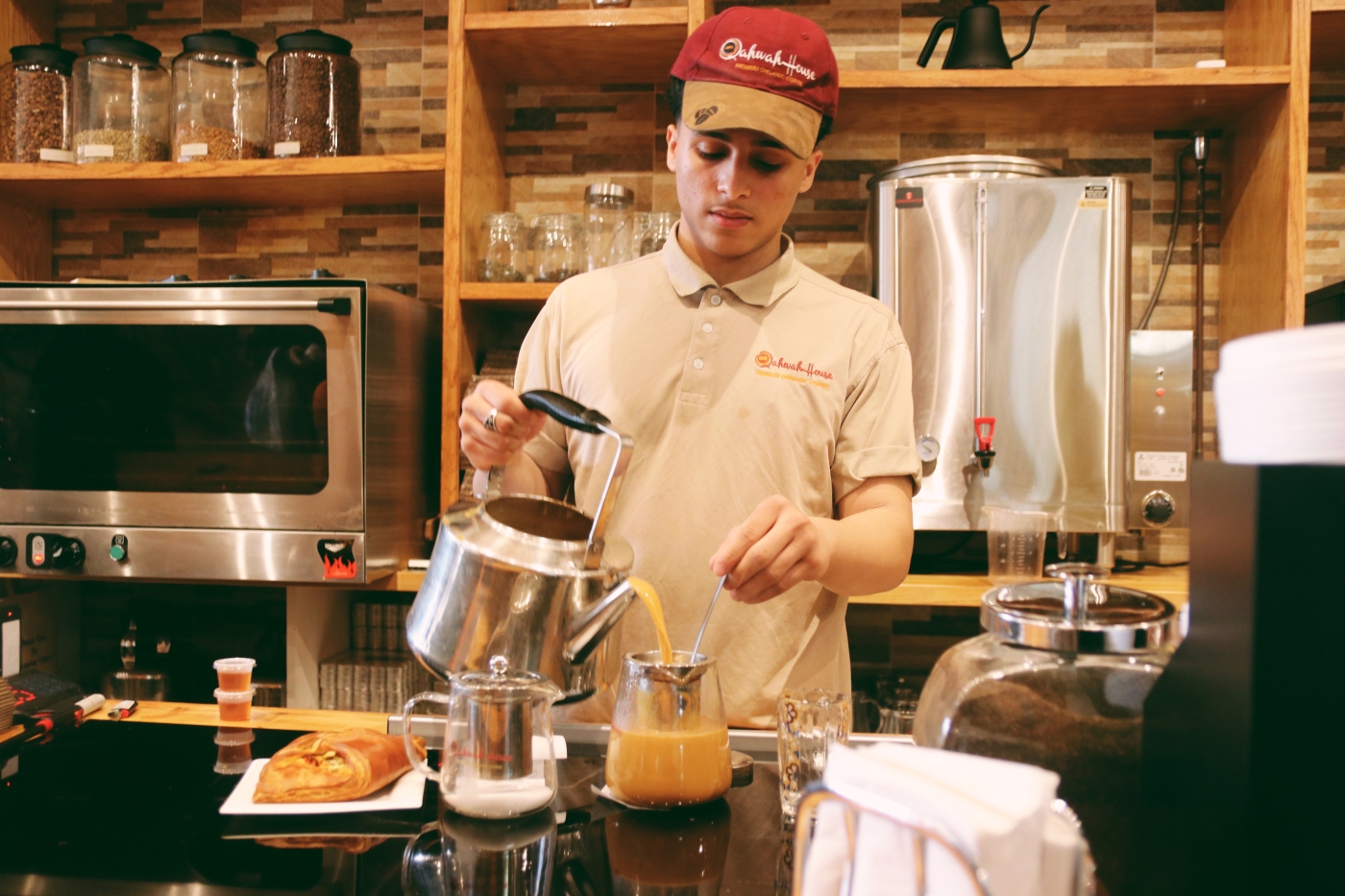 The first time Husam Kaid tried Adeni chai (Yemeni tea) at Qahwah House, it reminded him of Yemen. One sip and he was reminiscing about Ramadan nights in the old city of Sanaa.

It was a tradition in his neighbourhood that young children would head to the old city between Tarawih (an extra night prayer performed during Ramadan) and Fajr (dawn) prayers.

Kaid recalls cans of kidney beans being emptied out and replaced with hot Adeni chai, which he and other children would then drink.

Though Qahwah House doesn't serve tea in empty cans of kidney beans, the taste is very much the same and reminds Kaid of home, he says.

And for many of the young Muslims and Arabs in New York, Qahwah House serves as a place of community - a place where they can get a taste of the place many of them yearn to be in.

The coffeehouse first opened in Dearborn, Michigan in 2017, a few years after Ibrahim Alhasbani, founder of Qahwah House, fled Yemen after a bomb exploded near his home. The explosion took his brother's eyesight.

Alhasbani's family spans eight generations of coffee farmers. He grew up around coffee and believes the best beans are from Yemen.

It's a belief with some historical grounding: the earliest cultivation of coffee is thought to have occurred in Yemen, where it was given the Arabic name qahwah, which the English word coffee derives from.

In the 1400s, the first coffee shipments began from Mocha port on Yemen's Red Sea coast, which was named after the variety of coffee beans found there. The port became the centre of the world's coffee trade.

When Alhasbani first tried coffee in the United States, he didn't like it.

So when it came time to decide what he wanted to do with his life in the US, he thought: why not open something he knew so much about? Why not teach Americans about the original coffee? And so Qahwah House was born.

The coffee beans come via ship directly from his family's farm in Yemen. And though the shipment often takes two months to arrive, for him it's worth the wait.

One of Alhasbani's reasons for launching Qahwah House was to build bridges between cultures. It's one of the main reasons why the New York City location is in Brooklyn's Williamsburg, a majority white, Jewish neighbourhood, he says.

"There are no Arabs or Muslims in this area," Alhasbani told MEE. "That's why I decided to open in this area. I want other nationalities to come together and see what's going on. It's not like what you see on TV. We have good drinks and we have good culture we can share with everyone."

And he's right. Qahwah House does bring people together. On a cold mid-February afternoon, the coffee house was crowded.

While people waited for their orders, many would stand and admire a giant map that traced the roots of Yemeni coffee and how it was distributed to the rest of the world.

Young people were engaged in conversations about college or about their latest dates, and many were just catching up because they hadn't seen each other in a while.

While Qahwah House does exactly what Alhasbani intended it to do, it has also become an unofficial third space for young Muslims in New York City.

Kaid frequents Qahwah House almost every third night. The staff are his friends, one is his brother, and they get his tea ready as soon as he walks in the door. He says he wouldn't have it any other way.

"It's always very crowded. The music is playing in the background. When specifically the Yemeni customers come, we yell out the orders like we're back in Yemen. It’s a piece of home away from home," he said.

'When specifically the Yemeni customers come, we yell out the orders like we're back in Yemen. It’s a piece of home away from home'

He also credits the breadth of knowledge the staff have. He says they are the reason so many more people have started to learn about Yemen.

"They go beyond coffee. If there's a conversation, the staff know a lot about the product, the history of the coffee, where the beans are coming from.

"I feel like a lot of people have learned more about Yemen through Qahwah House than they would through the recent unfortunate press coverage of Yemen, which is limited to the 'worst humanitarian crisis'. Qahwah House is displaying another perspective of Yemen."

Though Romiya Siddique isn't Yemeni and it takes her a while to get to Williamsburg, she has found community in the coffee shop. It's a place that makes her feel safe.

"At Qahwah House, there is no judgement. In the Muslim community, there's a lot of judgement. Once I step into Qahwah House it's a new era, this new modern environment. There are kids in college, kids that are working, people coming after work, hanging out with friends," she said.

"And it's an environment where you can meet someone new, whether it be a friend or potential spouse."

For Asad Dandia, Qahwah House became a place where he and his friends would go for post-iftar coffee. Iftar is the meal breaking the daytime fast observed by Muslims during Ramadan.

He describes it as a "melting pot of different Muslim communities coming together just to chill".

Over a decade ago, Dandia was surveilled by a New York Police Department informant. He then became a part of a class-action lawsuit against the NYPD over the surveillance of Muslims. For a long time, he and other young Muslims didn't feel safe in closed spaces.

'It's not a mosque. It's not a community centre, it's not a formal organisational space. It's just a coffee shop. But that is what makes it special'

"The 2010s were very difficult for us Muslims because of the whole surveillance matter… and many of us didn’t have those third spaces available to us. I think Qahwah House offers an opportunity to rediscover that way of making a community," he told MEE.

"And I am happy to see young Muslims, these kids who were probably eight or nine when the Associated Press report came out about surveillance, who are now 18 and 19 going to Qahwah House and they don't have to endure what I did when I was 18.”

Dandia calls it a "third space" for the Muslim community. It's a space that's deeply needed, he said.

"It's not a mosque. It's not a community centre, it's not a formal organisational space. It's just a coffee shop. But that is what makes it special. It brings together so many components of people’s identities, of their history, of their stories into one warm coffee shop."

What also attracts young Muslims to Qahwah House are the hours. Cafes usually stay open during office hours. After 5 or 6pm, they will shut down because people don't usually drink coffee after that. Instead, they will go to bars and socialise there.

But Muslims do not tend to do that. And so they need a space where they can socialise. Qahwah House fills that gap.

The coffeehouse has become so successful that Alhasbani opened a few more branches. And in 2022, he is excepted to open at least five new locations across the country.

"This space reminds young Muslims, young Arabs of our culture," Alhasbani said. "It reminds us where we come from, so they will not forget their culture and their history, and they will work to improve on this history." 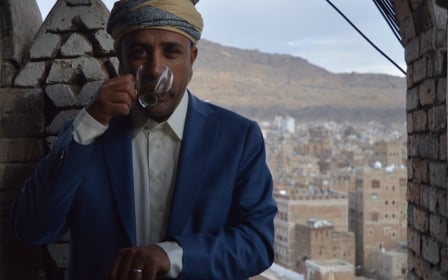 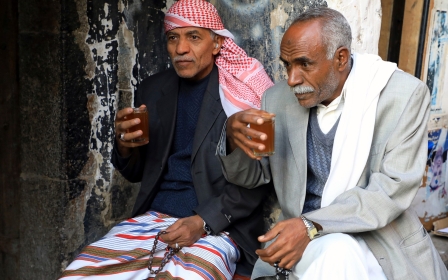 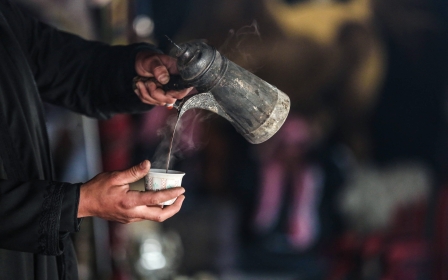 Culture
Around the Middle East in six coffees