International Women's Day: Five Palestinian women you should know about

From anti-Zionist activist Zulaikha Shihabi to the poet Fadwa Tuqan, we profile some of Palestine's most influential women

Women have been at the forefront of Palestinian life throughout the region's modern history, serving in just about every aspect of society, from community organisers to political negotiators.

Palestinian women are among the most educated in the Arab world with a 94 percent literacy rate and girls outperforming boys in academic testing.

In keeping with trends elsewhere in the Arab world, women are well represented in so-called STEM subjects (science, technology, engineering and maths), often surpassing male participation in subjects, such as physics.

But those achievements come with caveats. For example female representation at senior levels across many industries remains limited and the average wage of women is around 70 percent of that for men.

In establishing such a prominent role for themselves in the Palestinian social order, they have had to overcome obstacles including gender-based prejudice and the Israeli occupation of Palestinian territories.

Despite those obstacles, many have established themselves as experts and icons in their respective fields.

Here, Middle East Eye profiles five women who have made their mark:

In 1948, al-Husseini came across a group of 55 young children outside the Church of the Holy Sepulchre in Jerusalem’s Old City.

The children had just narrowly escaped the massacre unfolding in their village of Deir Yassin, and many of their family members had been killed.

Al-Husseini gathered the children and found a room in which they could seek shelter and be safe.

She also made sure to visit the children everyday, bringing them food and checking up on their wellbeing.

Later, Husseini converted part of her grandfather’s mansion in Jerusalem into an orphanage for the children, gradually expanding the facility in order to look after more orphans from surrounding areas.

The social activist did not stop there, establishing more orphanages in villages and cities across Palestine.

An advocate of women's education, she also set up the Hind al-Hussein College for Women in 1982, which became a branch of Al-Quds University.

Husseini was hailed as a hero by Palestinians, and was granted a number of awards, including the Jordan Globe Medallion for Social Work in 1983 and the First Degree Medallion by the German government in 1989.

She died in 1994 but her legacy continues to inspire Palestinian women today.

Palestinian-Lebanese author and women’s rights advocate Marie Elias Ziade, also known as May, was a pioneer in the empowerment and education of women.

Born in Palestine in 1886, Ziadeh went on to found one of the most renowned literary salons in the region, initially from her own home but later becoming a major meeting place for intellectuals, journalists, critics and philosophers.

Female characters often featured in her literary works, most often crafted as leading figures with strong personalities. Her work also tackled sensitive and complex topics, from the patriarchy to social issues and freedom.

Having mastered nine languages, Ziadeh was also a proficient translator. Some of her most notable contributions include translations of novels that were originally written in German, French and Italian. The endeavour paved the way for a blossoming of Arab literature.

Besides her literary output, Ziadeh pushed for the education of women and advocated for their involvement in society.

The Arab Renaissance, referred to as the "Nahda" in Arabic, became a significant part of Ziadeh’s life. Many academics believe that the period between the 19th and early 20th centuries saw a flourishing in the arts and rapid transformation of political thought, including ideas first developed in Europe.

The cultural shift originated in Egypt but gradually spread across the Middle East. For Ziadeh, this was an opportunity to raise concerns about the role of women in society and to enact changes ensuring their equality.

Although Ziadeh never married, her love for the celebrated poet Khalil Gibran was common knowledge.

The pair wrote letters to each other regularly until Gibran’s death in 1931, which left Ziadeh deeply depressed.

A prominent Palestinian poet, Fadwa Tuqan was known for poems that encapsulated the Palestinian experience in the face of occupation.

Tuqan was born in Nablus in 1917 and came from a family that was well acquainted with the written word. Her brother was both a poet and a playwright and used his work to shine a light on the Palestinian experience, particularly during the anti-British revolt in 1936-39.

Having lived through significant events in Palestinian history, such as the Nakba (Catastrophe) in 1948, Tuqan's work dealt with themes such as shock, resistance and steadfastness.

Between 1962 and 1964, Tuqan studied at Oxford, becoming an advocate for women’s issues and other human rights causes, but the Palestinian plight continued to influence her, and she often spoke against the dehumanisation of Palestinians and the Israeli occupation.

Tuqan gained international recognition, winning awards and having her work translated into many languages. The poet died in December 2003 at her home in Nablus aged 86.

Born in Jerusalem in 1903, Zulaikha Shihabi earned a reputation for her campaigns in support of women’s rights, and also against Zionism.

She was an organiser for political gatherings of women and created avenues through which women could voice their concerns.

Her efforts were influential in the creation of several women's societies across Palestine.

A dedicated reader and writer, Shihabi also worked as a teacher to young girls, eventually founding the Dawha School.

She also met up with other revolutionaries, most notably the Egyptian feminist Huda Sharawi, with both taking part in the Eastern Women Congress in 1938 in Lydda, Palestine, where they championed the Palestinian cause.

As well as aiding and supporting the establishment of women's organisations, Shihabi encouraged practical help, including training in emergency medicine and the provision of welfare to those most in need. One of her most noteworthy achievements was establishing shelters for orphans and women.

Shihabi died in May 1992 and her funeral was held at Jerusalem's al-Aqsa mosque.

Born in the mid-1890s, Aboud is remembered as being one of the first female photographers in the Arab world.

After being gifted a camera as a teenager, Aboud worked on photographing landscapes and portraits of those closest to her. However, after graduating from university in Lebanon, she focused more on archeological work, eventually setting up her own studio.

Abboud excelled in her profession at a time when very few women were involved in the arts and many were reluctant to appear before cameras, especially women.

Karima Abboud, Palestine, (1894-1940) first Palestinian woman photographer. Karima began to practice photography as a teenager in 1913. As well as photographing landscapes, many of her pictures featured women in Bethlehem. pic.twitter.com/7cBbTyKseE

Today, Dar al-Kalima University in Bethlehem commemorates Aboud’s work through a photography award in her name. The annual award was launched in 2016, and was aimed at preserving Aboud’s legacy.

The award also encourages young Palestinians in the country and the diaspora to pursue photography to document their experiences. 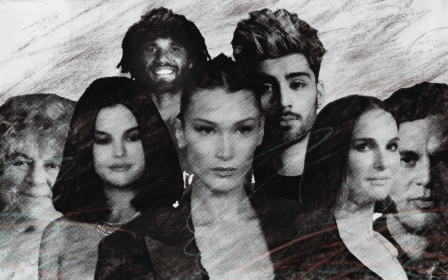 Palestine State
Palestine: 10 celebrities who have voiced their solidarity