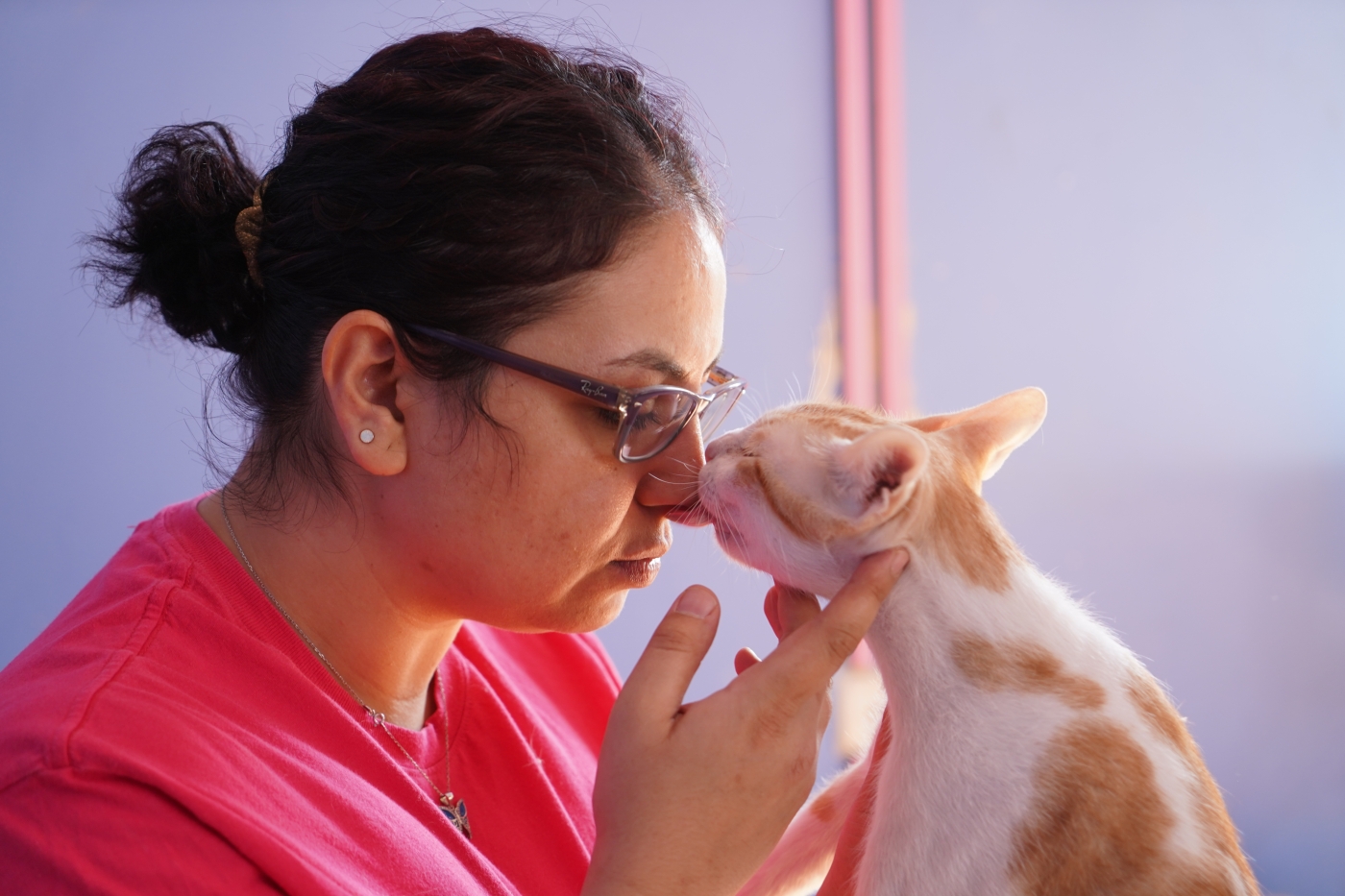 Amal Amro opened up a hotel for cats and dogs after witnessing animal cruelty in Syria’s Damascus. Now the project has been running for almost a year
Ismael Adnan 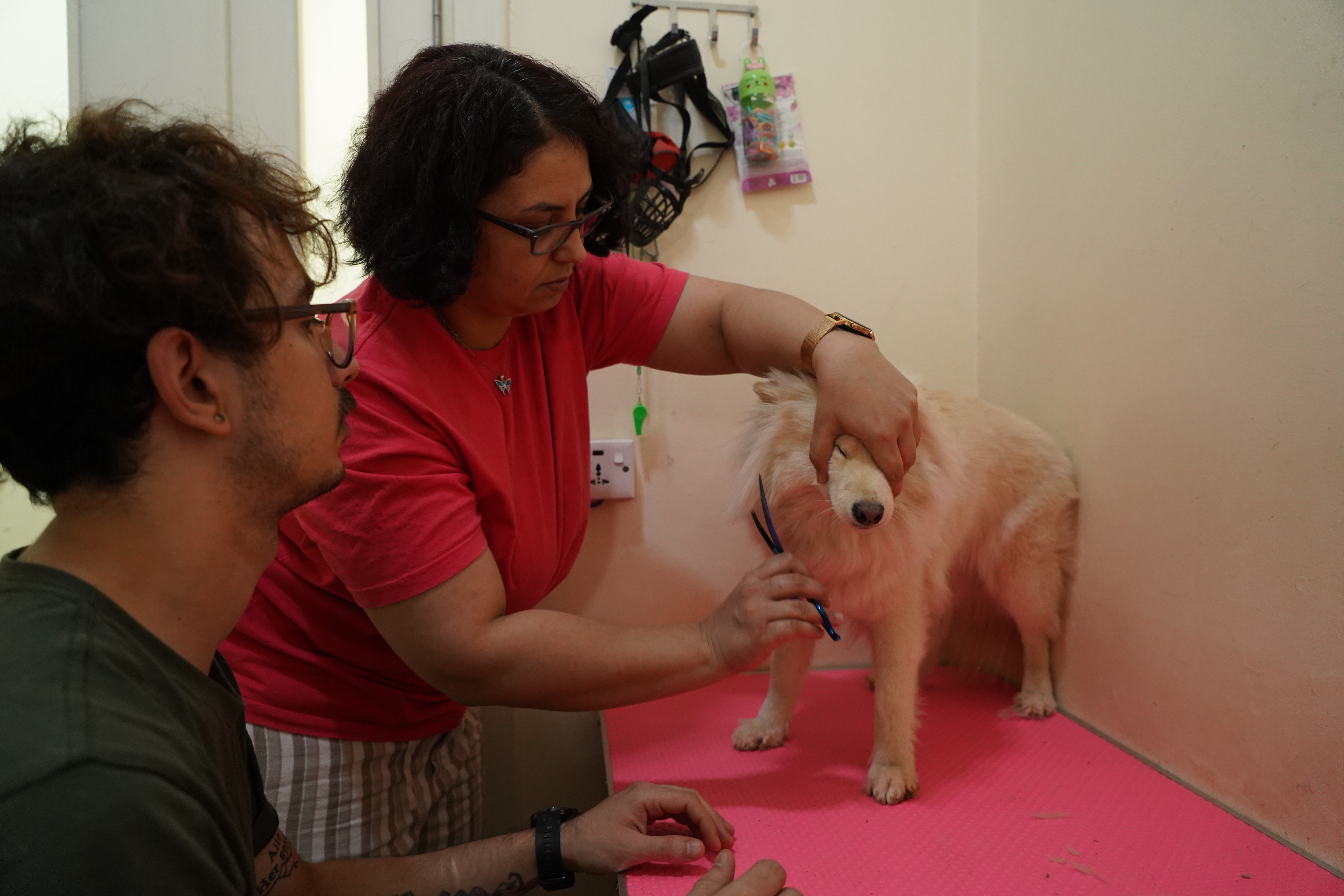 Amal Amro’s journey of saving and caring for animals started when she was living in the countryside district of Jaramana, in Syria’s Damascus. The Palestinian-Syrian refugee would often come across animals being killed and tortured in broad daylight, spurring her to act against such cruelty.

“I used to watch young children cutting small dogs' ears or hitting them. I would shout at them and try to stop them from doing so, then go and try to treat the animal,” she told Middle East Eye.

Amro says she was 25 when she saw dogs being mistreated and trotured in the streets and was eager to do something about it.

However, Amro was forced to leave Syria in 2015 because of the worsening living conditions created by the ongoing war in the country. After heading to the Kurdistan region of Iraq, which she made her new home, she decided to continue her work saving and caring for animals.

"I feel very sad when I see animals being treated badly," she said. "They are innocent souls that do not know, they're weak and unable to protect themselves from harm, especially dogs and cats."

"Cats and dogs always approach humans and feel safe in their proximity, so when I see people treat them harshly, I feel bad," she adds. (All photos by Ismael Adnan.) 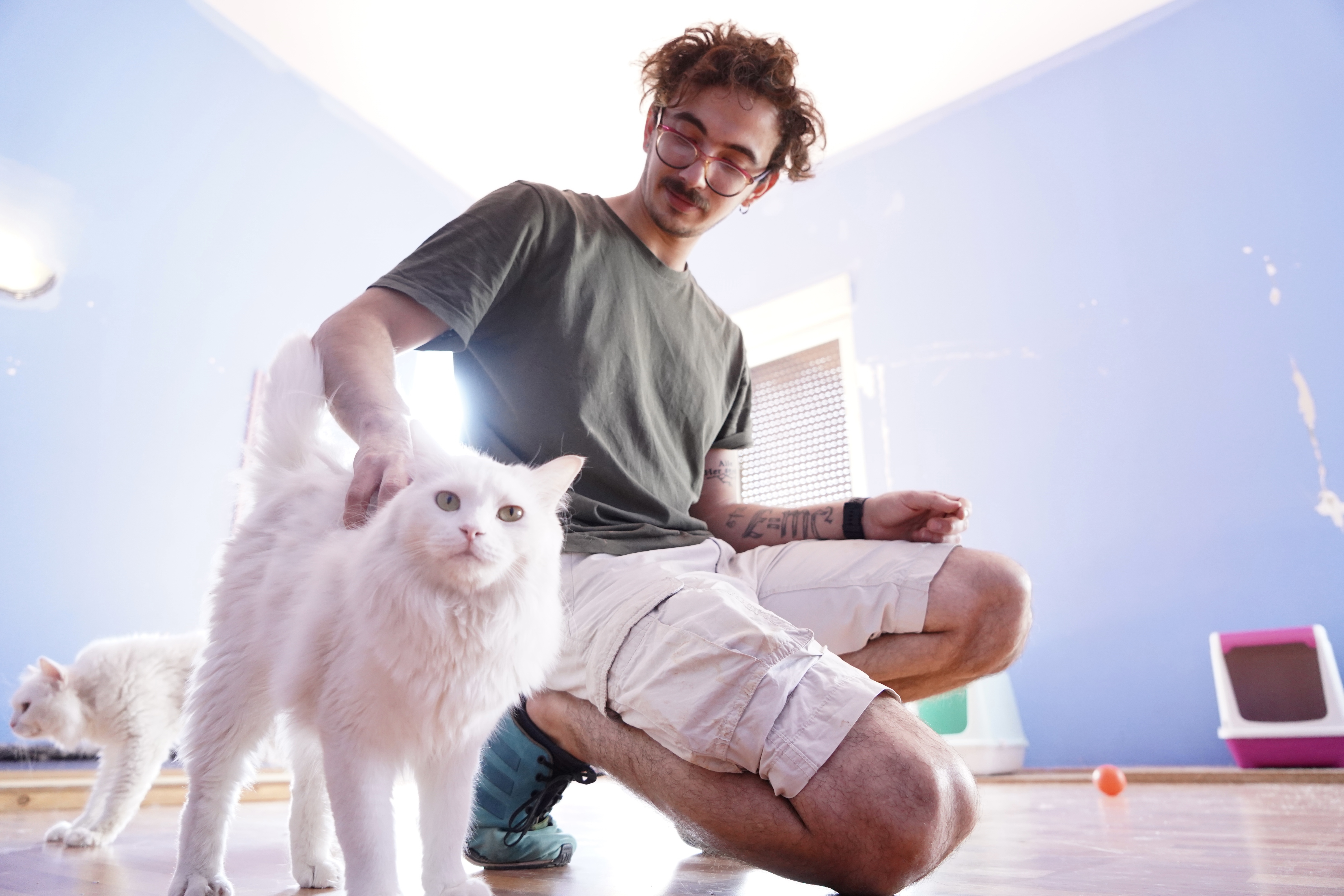 Originally, Amro had studied English at Damascus University, and dabbled in work in television, cinema and theatre but was not able to progress in her career because of the war in Syria.

After working at some office jobs, and being forced to reconsider her prospects following the outbreak of the coronavirus pandemic in 2o20, she decided to take her life in a different direction.

Now, Amro has opened the first hotel and salon for dogs and cats in Erbil, capital of the Kurdistan region of Iraq. The hotel provides a range of different services for the animals, many of which have been through traumatic experiences.

The hotel also allows people to adopt some animals, depending on their condition. In cases like this, an adoption agreement is signed, fees are paid and care advice is given to ensure it is looked after in the correct way.

"In the future, we hope to exand further and establish a non-proft organisation and open up a shelter, to allow for more adoptions," explains Amro.

After opening in January this year, the hotel, which is funded by the money Amro receives from the services she provides, caters for over 25 cats and dogs.

“I started this project on my own and with a very small budget, but thank God, I succeeded. After a while, my husband started helping me, and we started doing work which no one here is doing but is much needed,” Amro told Middle East Eye.

Although Amro was never formally trained as a vet, she says her love and adoration for animals made her go out of her way to pay close attention to vets as they treated animals who had been rescued.

"I was always looking for any information and making sure it was correct. After observing for a long period of time, I was able to give the animals needles and treat cases of scabies as well as other diseases common in dogs," she says. 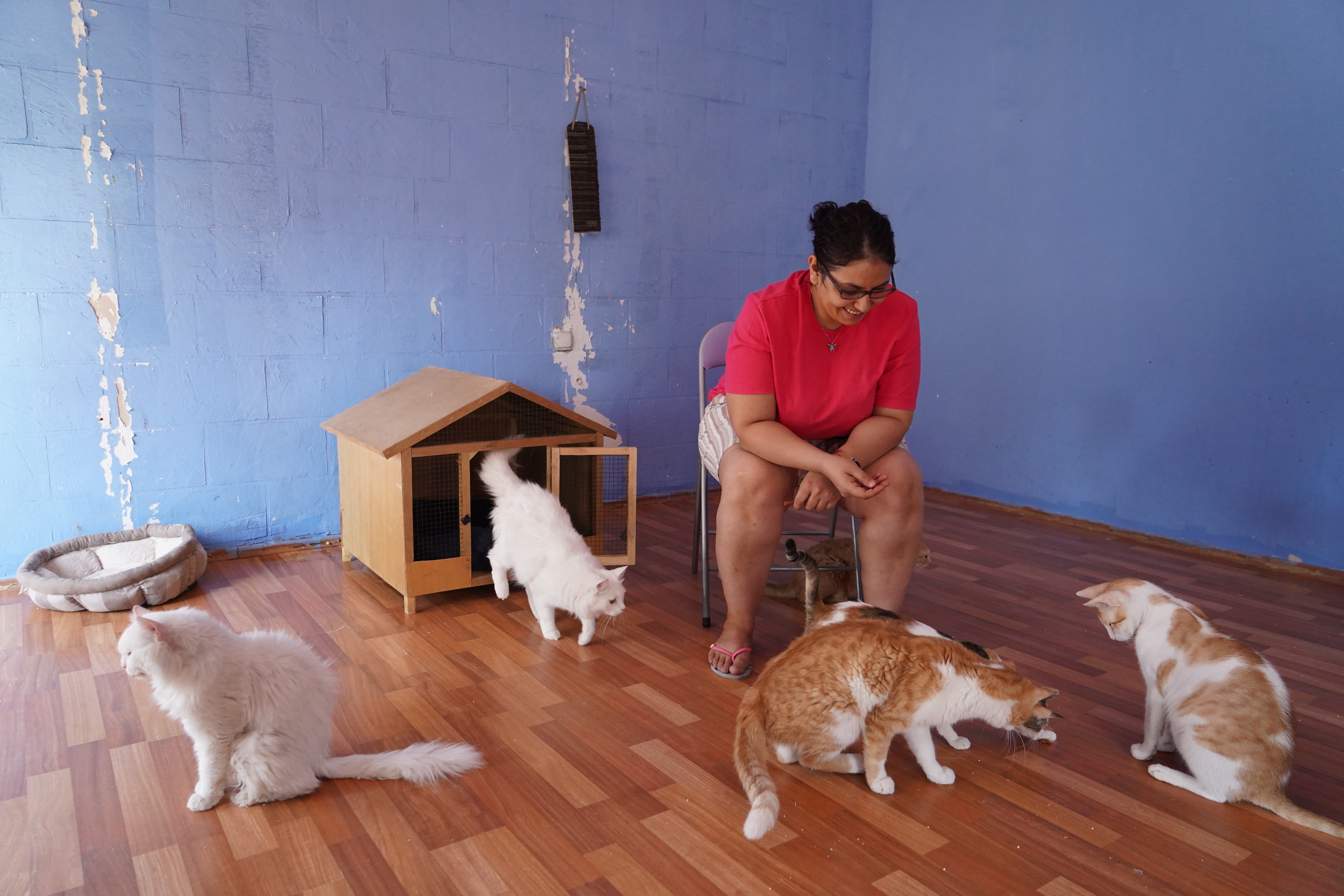 Many of the animals receive healthcare services, from grooming to psychological care.

According to Dr Sulaiman Tamer, founder of the Kurdistan Organisation for Animal Rights, animals in the region face "hopeless" circumstances.

“The condition of the animals is bad throughout Iraq, not only in the Kurdistan region but everywhere. It needs a serious stance from the government,” he told Middle East Eye.

Tamer explained animals in the region face difficult circumstances because of several factors.

“It’s because of a lack of awareness in society, people’s culture towards animal rights, as well as overfishing, little rain, drought and the cutting of trees as well as the burning of pastures," he explained.

"These reasons have all led to the lack of crops for grazing, lack of food and the absence of safe areas for animals.” 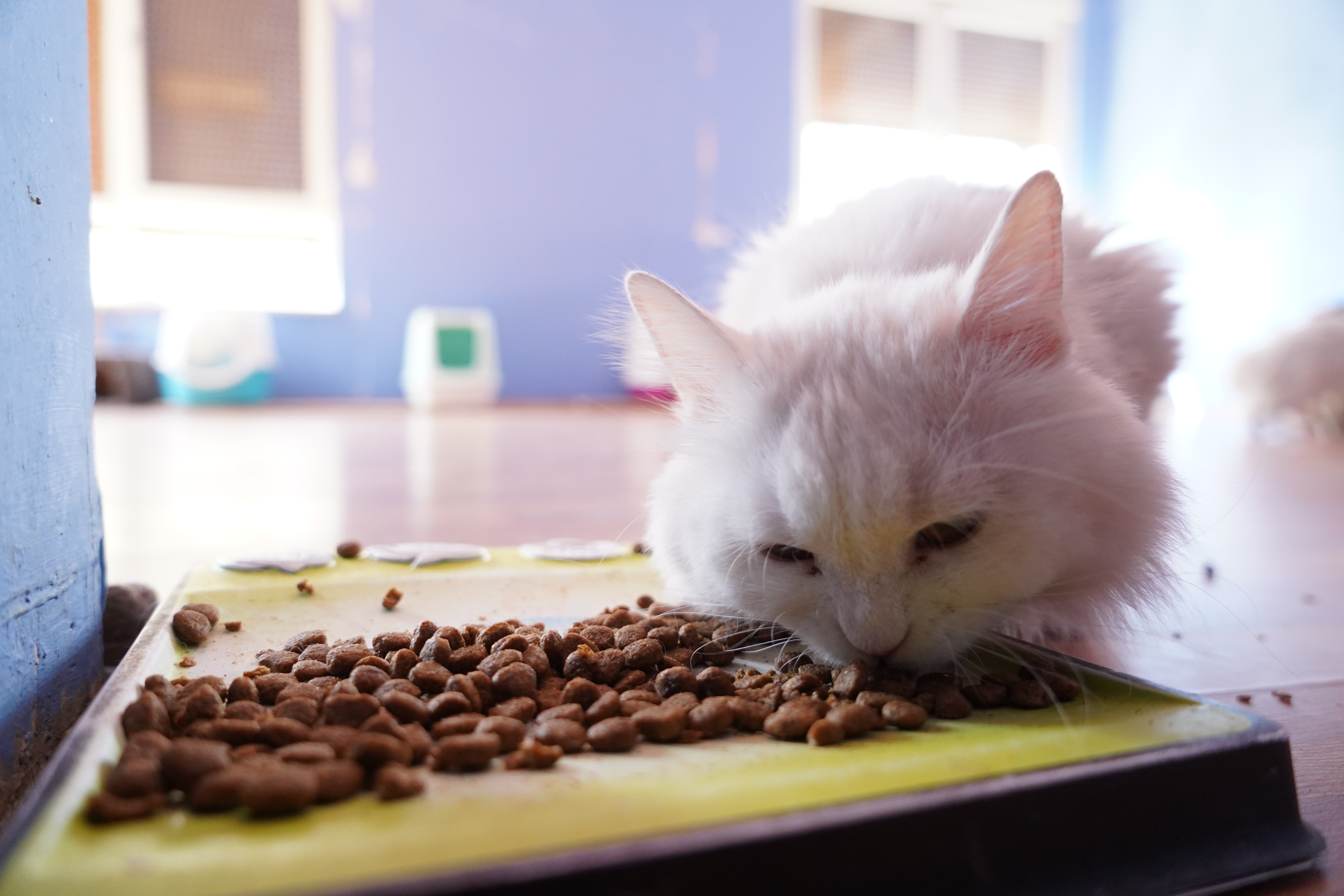 Amro also said that one of the biggest concerns is many people in the region don’t know how to take care of pets or animals.

“At this hotel, we provide two services which aren’t available anywhere else,” she said.

“This includes daily care, meaning the customer can bring his dog or cat during his working hours, similar to a nursery for a child, and we have recently included a service which allows people to obtain documents for their pet to travel out of the country.”

Amro credited much of the businesses’ success to her and her husband’s team work.

“There is no financial support from organisations for us… my husband’s support has made me even more successful and now I’m thinking of building a swimming pool in the garden for the dogs,” she said. 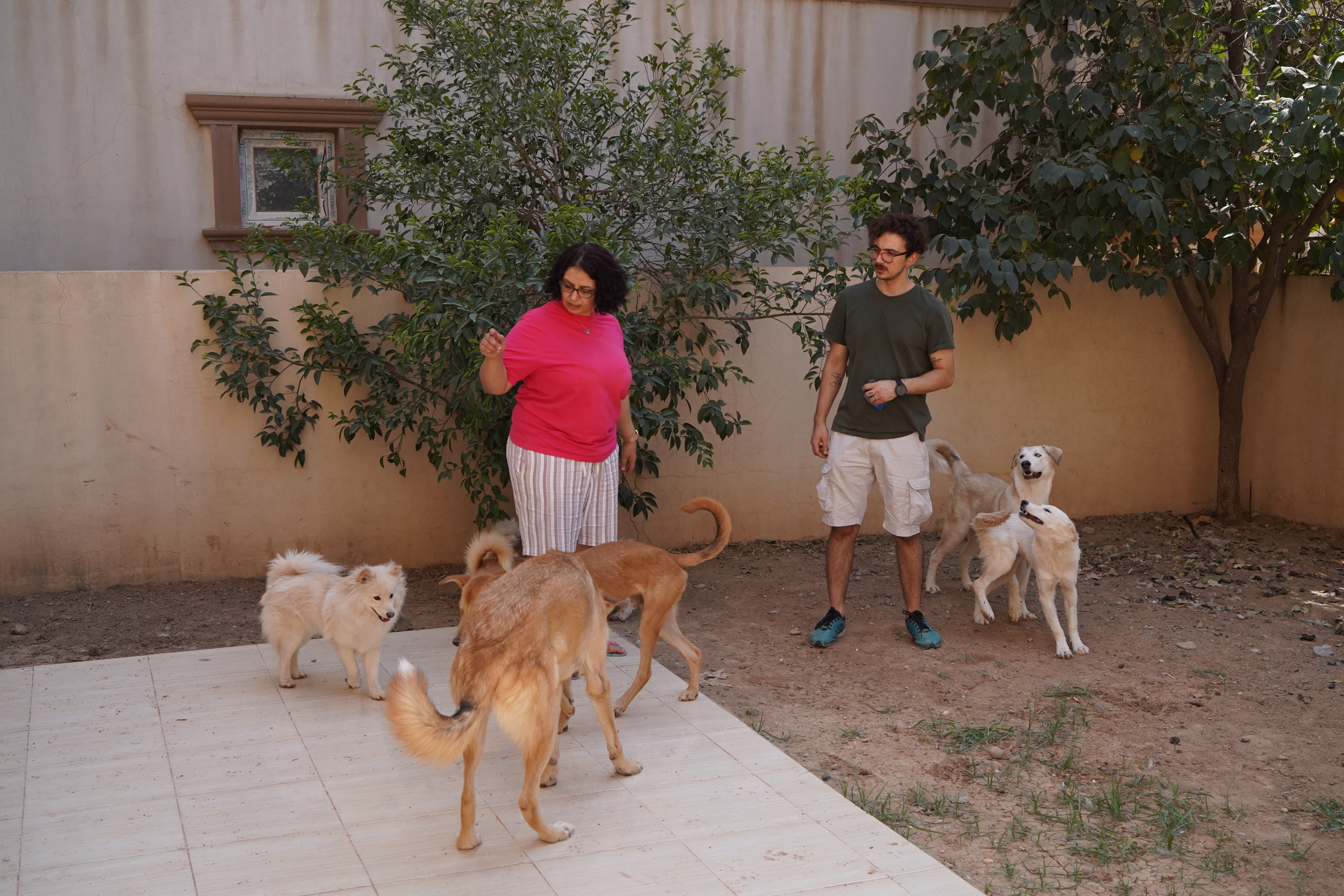 On a typical day, Amro and her husband will spend most of their time with the dogs and cats, playing with them and ensuring they are well taken care of and physically healthy. The animals are kept in a two-storey hotel which was originally a villa that Amro converted when she started the project. 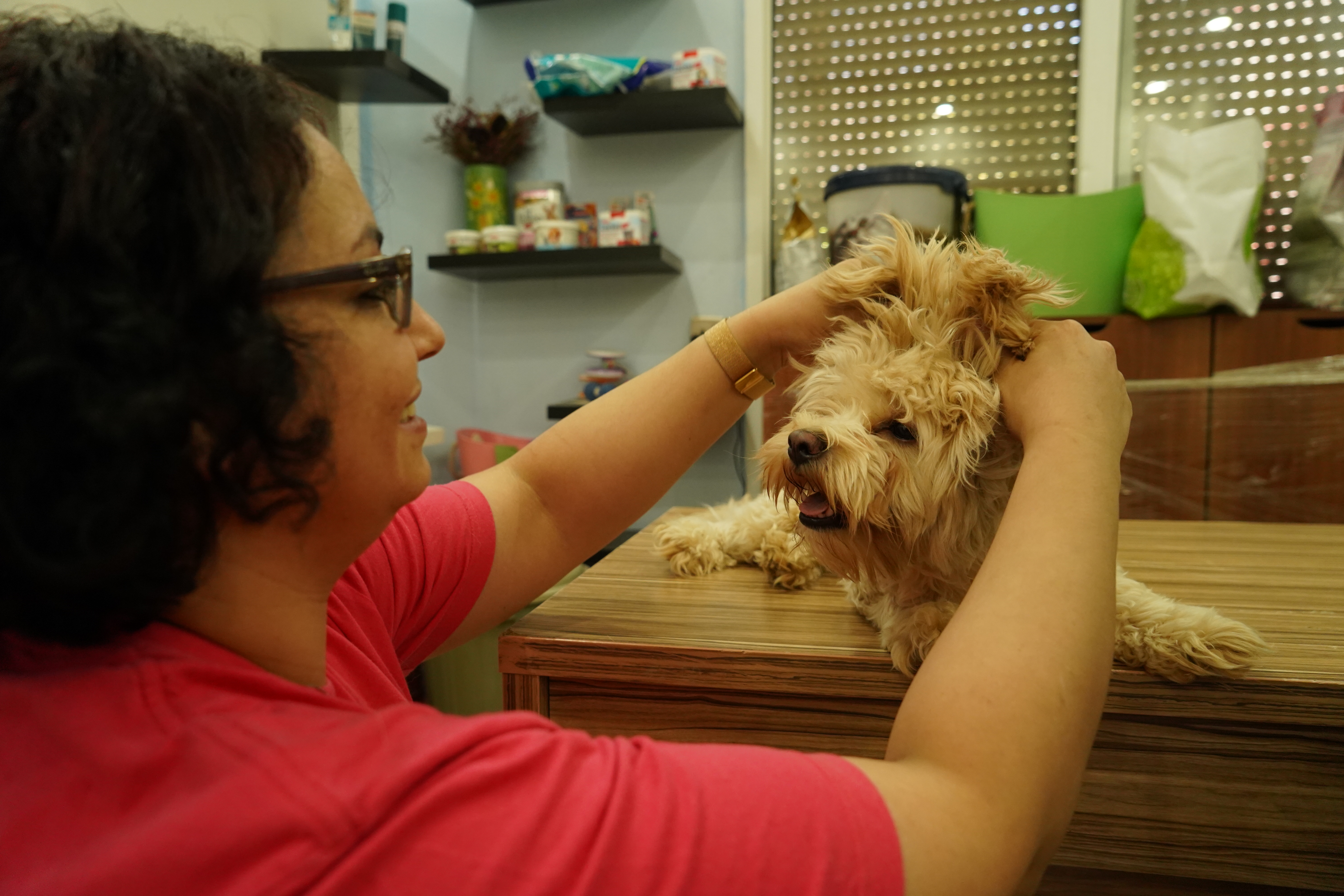 Amro was inspired to start her journey looking after animals after taking care of one particular dog which she named "Blacky".

“Blacky was a very fierce dog, he was nine months old and he was under threat from being sent to a farm or killed,” she explained. “I volunteered to adopt and train him, and he’s now 11 years old and is no longer fierce,” she added. 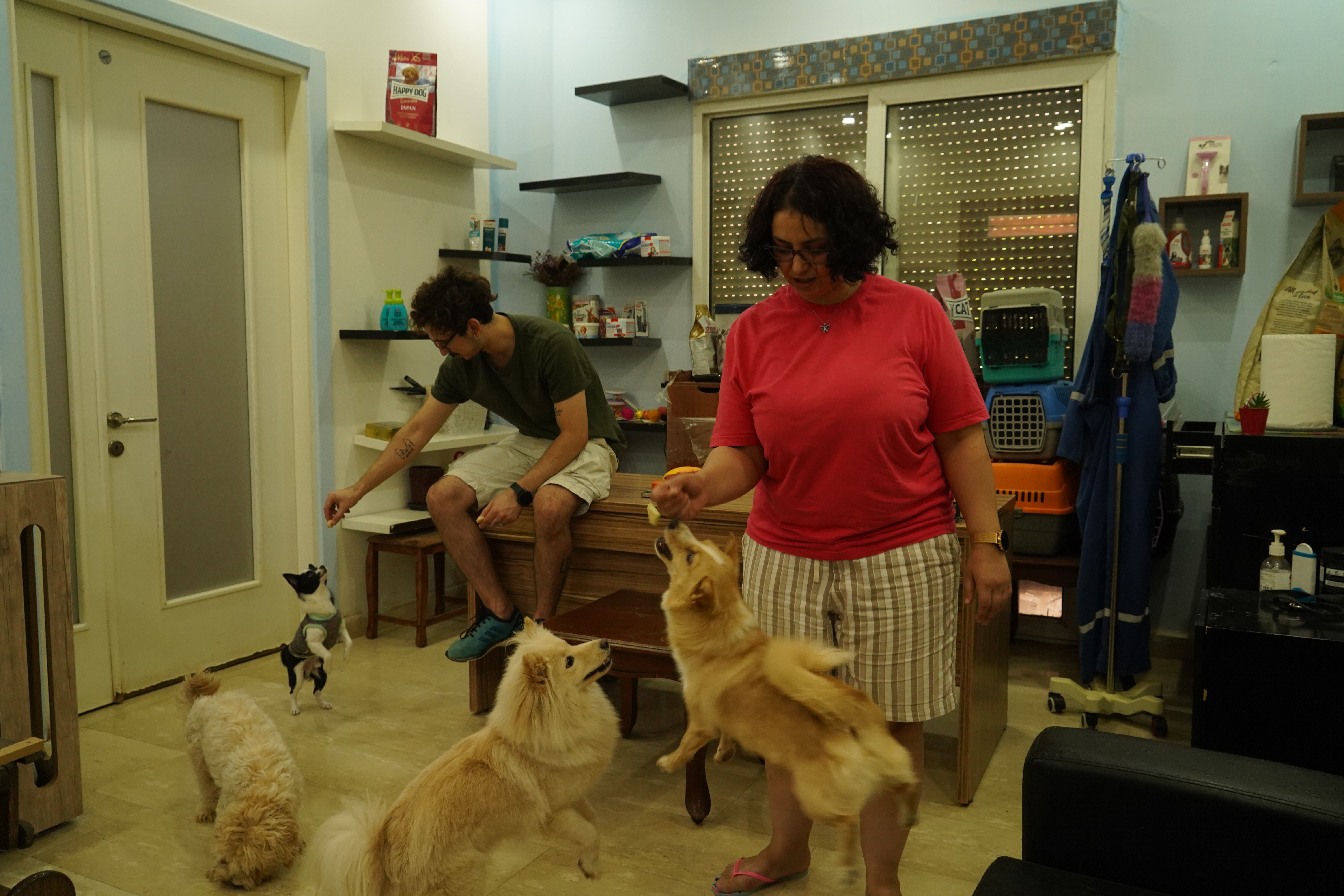 Not only does Amro dedicate the majority of her time to the pet hotel and looking after animals, but she now focuses on educating people about the challanges up against them as well as how to properly look after and care for them.

One of her projects is a YouTube channel which she started, in an effort to reach a wider audience.

“I wanted to collate all of my experience and information I know, as well as what I wanted to advise people with in one place, then publish them. I also share stories about my animal rescue experiences,” she said. 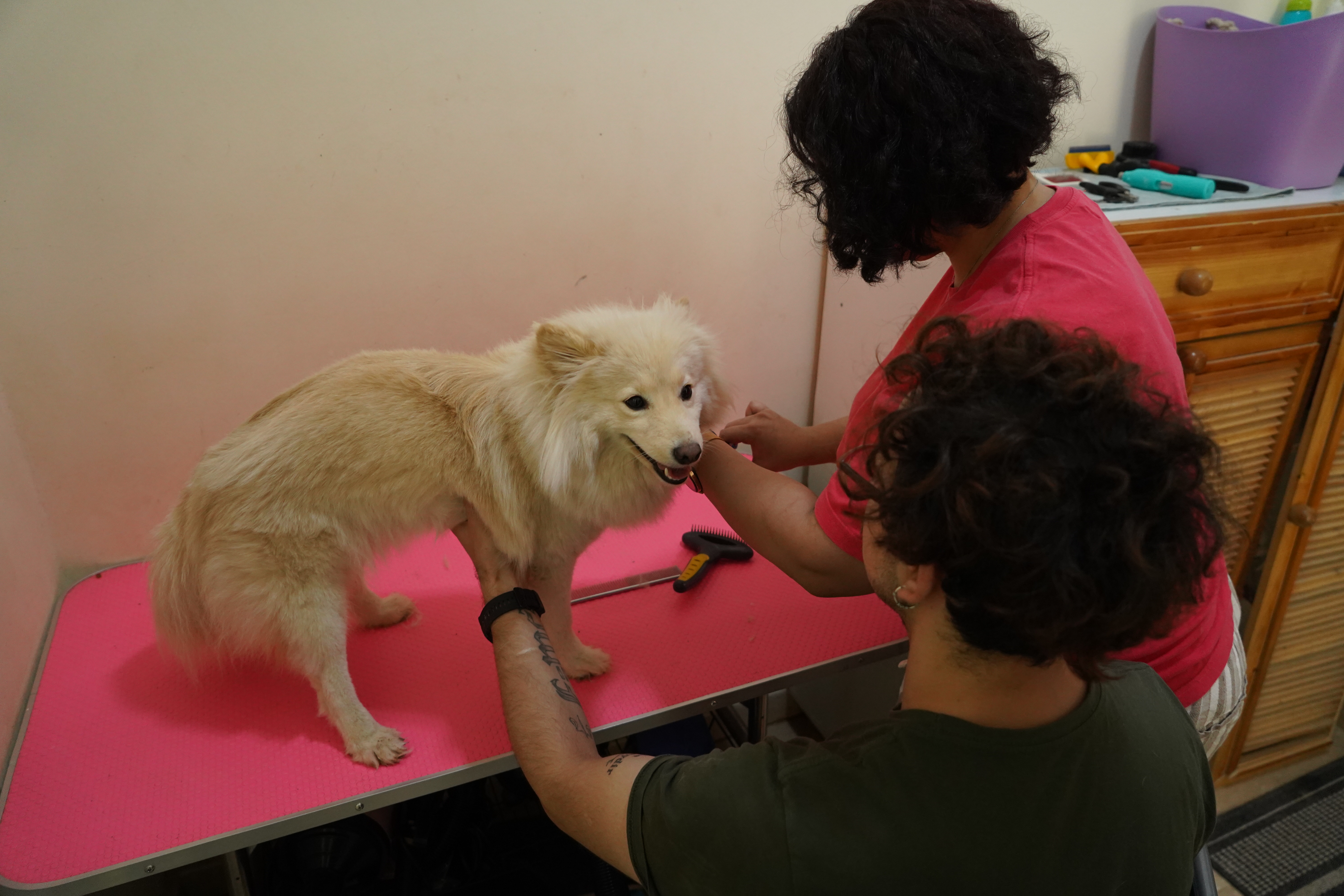 The hotel has brought great satisfaction to Amro and her husband, who feel like their work is making a difference, while also making a small income from it.

Amro said that while walking around her local neighbourhood, she has noticed a change in people's attitude  towards animals.

Despite Amro’s efforts, she maintained that a lot of work still needs to be done on animal rights in the region.

Tamer agreed, and said that there have already been some efforts to address the situation, however people are yet to deliver on their promises.

“We submitted a draft animal rights protection project that includes about 60 articles to the parliament of the Kurdistan region of Iraq more than once, but so far there has been no development on the matter,” he said.

“Unfortunately, in the Kurdistan region and in Iraq in general, there are no laws regarding animal rights, except for the law to kill stray dogs ,” he added.

Amro and her husband remain undeterred, and are already toying with the idea of expanding the hotel project even further, in an effort to provide job opportunities for locals and carry out training courses for others who may be interested in getting involved with a similar line of work. 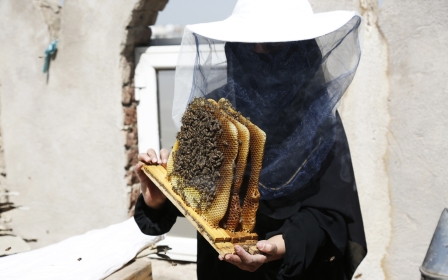 Culture
In pictures: the female beekeeper of war-torn Sanaa 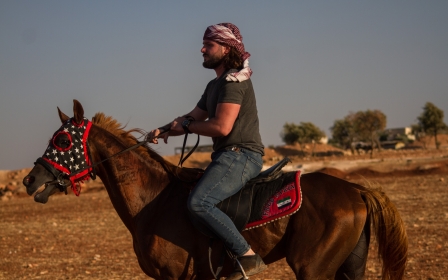 Syria War
In Syria's Idlib, horses are a difficult yet gratifying passion 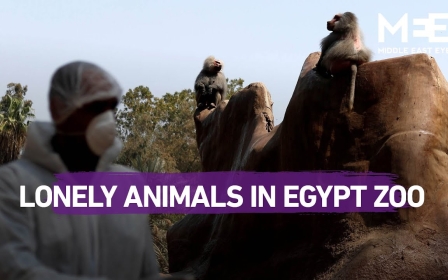