When We Were Arabs: 'I am not an Oriental' 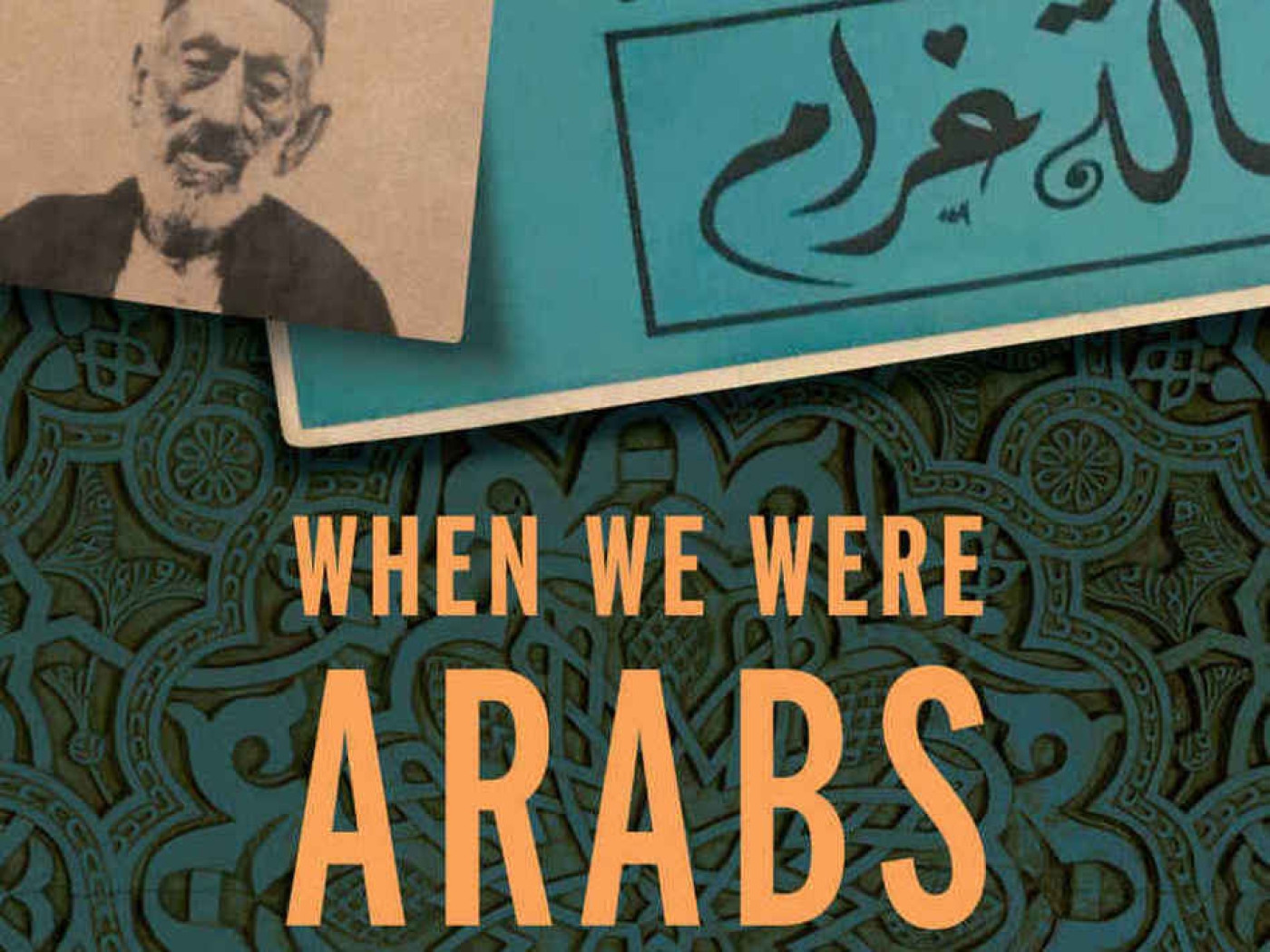 “I am a Jewish Arab. For many, I’m a curiosity or a detestable thing. Some say I don’t exist, or if I did, I no longer do.”

Thus go the opening lines of Massoud Hayoun’s book When We Were Arabs, which he describes to Middle East Eye as a “decolonial memoir of my grandparents and what came before”. The book is an acutely well-researched and thorough account of the lives of Jewish North Africans before and after most of them left the region.

The American writer of Moroccan, Egyptian and Tunisian descent has a clear purpose and is not shy about it; in the first chapter of the book he writes, “this book has a political agenda. The main difference is that I’m telling you, upfront: my intention is to reclaim the Jewish Arab identity for me and to recuperate it to reclaim the Jewish Arab identity.”

'In this world, I am Arab first and last. Judaism is an adjective that modifies my Arabness'

The book, published in June by The New Press, intricately links the writer’s family tale with history, in a chronological manner, throughout the chapters ‘Origins’, ‘The Nation’, ‘The Rupture’, ‘Exile’, ‘Darkness’ and ‘Memory’.

He starts by establishing the importance of the indigenous Jewish presence in North Africa going back thousands of years; then he discusses the impact of colonialism and other important events in history on North African Jewry, as well as the creation of Israel, and the ensuing conflicts and departures.

To Hayoun, terminology is important. It defines his identity. He chooses to identify as a Jewish Arab, and not an Arab Jew; thus placing his Arabness as central. For him, identifying as an Arab Jew puts the accent on a common Jewish belonging (which he considers to be a fabrication), thereby diminishing his family’s heritage and feeding into Zionist intentions.

“I identify as Arab because reclaiming my place in the Arab world - an aspirational Arab world, in solidarity with itself - scares our foes who have, for so long, taught us to fight against ourselves,” he writes.

Neither Sephardi nor Mizrahi

He rejects the terms Sephardi and Mizrahi. He explains that "Sephardi" is the Hebrew word for "Spanish", which is the term initially used to denominate Iberian Jews who fled the Spanish Inquisition for North Africa, and which turned into a catchall term for all North African Jews.

This process is described by Hayoun as a whitewashing of Jewish Arabs that ignores their indigenous nature.

Hayoun is also not "Mizrahi", which translates to "Eastern" and eerily echoes the colonial European term "Oriental": “I am not an Oriental, in English or in Hebrew. My family is not from east of somewhere. To us, where we are from in North Africa is not in an imagined East of an imagined West; it is the center of our world.”

'To us, where we are from in North Africa is not in an imagined East of an imagined West; it is the center of our world'

Hayoun’s Arabness is his identity and politics, it is how he was raised, it is “the soil from which I emerge”, whereas Judaism is his faith and his understanding of metaphysical things.

He explains: “In this world, I am Arab first and last. Judaism is an adjective that modifies my Arabness.”

His Arabness is, very clearly, also a form of postcolonial resistance: “My Arabness is cultural. It is African. My Arabness is Jewish. It is also retaliatory. I am Arab because it is what my parents have been told not to be, for generations, to stop us from living in solidarity with other Arabs.” He chose Arabness, because according to him, “it is to choose solidarity over the division wrought by white colonialism”.

The narrative of the book revolves around the story of Hayoun’s grandparents, Oscar and Daida. Oscar is Moroccan-Egyptian, and Daida is Tunisian. They both end up in Paris, where they meet, after having to flee their respective countries.

Hayoun discusses in great detail the European colonial enterprise to make Jewish North Africans feel no longer welcome in their home countries. This is according to him for a number of reasons, notably to create allies out of Jews in order to divide and conquer, and in order to instill in them a sense of transnational Jewish belonging, to later facilitate the Zionist project.

Mentioning his grandparents he writes, “by the time they were born, the colonizers had already established their institutions to carefully engineer their transition away from Arabness”. Their generation would be the last one to witness Jewish Arabness before exile.

This transition away from Arabness was manufactured by institutions such as the Alliance Israélite, a French alliance based in Paris whose missions included, inter alia, the creation of Jewish schools where children were taught that their ancestors were "Oriental Israelites", members of the "once-glorious Biblical nation of Israel, made primitive by their proximity to the backward Muslim Arabs", Hayoun writes.

He continues, in the fashion of Frantz Fanon, “the colonised, filled with self-loathing, in turn attempted to distance themselves culturally from the greater mass of indigenous people, who in the new world order were seen as backward and whose identity became shameful.”

For Hayoun, this division deepened the impact of colonialism on his ancestral countries: “These separations - across countries, cities, and households - weakened the state and facilitated the systematic rape of our lands and our people."

The end goal of these teachings was to convince Jewish Arabs that being Arab was a dirty characteristic that needed expunging, and to introduce them to the concept of Jewish nationalism. Daida, his grandmother, was told as a child by her teacher at the Jewish school, “You are not Tunisian, you are an Israelite.”

The colonisers’ agenda was to make Jewish Arab families become progressively less Arab with each generation, and so they imposed policies to that effect. While the children were being taught they were not part of the indigenous population, the state - under French colonialism - also treated them differently.

In Algeria, indigenous Jews were declared as French citizens by the state, creating a large divide between Jewish Arabs and other, mainly Muslim Arabs. At the same time, these institutions were pushing for the formation of a Jewish nation in Palestine.

The division was driven further between the Jewish and Muslim populations during World War II. In Egypt, Hayoun writes that some Muslim Egyptians welcomed a Nazi invasion in order to loosen the British grip over the country, but also as a means of obstructing a nascent Zionist movement that they were afraid aimed to occupy Arab land.

An even larger, perhaps final, wedge was driven between Jewish Arabs and other Arabs with the creation of Israel, and the consequential Arab-Israeli War, which saw a coalition of Arab countries fight Israel over the latter’s declaration of independence.

In Egypt, Jews no longer felt welcome, because, in Hayoun’s words, “(non-Jewish) people felt powerless in the face of Palestine’s occupation and their only means to fight back was to harm any Jewish person they encountered”.

Later, after the Suez Crisis in 1956, all Jewish Egyptians were declared as Zionists by the Egyptian government. They were to be expelled or face imprisonment in concentration camps.

Jewish Arabs were no longer safe in their countries across the Arab world, and many left for a promised land where they would no longer be persecuted.

Jewish families across the Arab world signed documents revoking their Egyptian, Tunisian or Iraqi citizenships, promised to never return and bequeathed their assets to the government.

Many of them were convinced Palestine was the only place left to go, because they had been taught that they had more in common with Jewish Russians and Germans than Muslim and Christian Arabs, although they shared customs, languages and a history with the latter that they didn’t with the former.

This book gives a fascinating insider’s view into what motivated Arab Jews to leave their countries and settle in Israel. Hayoun does not romanticise his family’s history, he is very honest about his grandparents, who, at the time, weren’t very preoccupied with the fate of Palestinians.

There is however a certain sense of solidarity with Palestine throughout the memoir. But rather than making the book about Palestine, Hayoun disclaims, “if there is little discussion of the Palestinian Nakba here, it is in the hope that you will endeavor to hear not me but Palestinians tell it.

"For too long, that story - of Palestine’s past and future - has been told by non-Palestinians.” Sometimes he’ll refer to the Nakba in a more subtle manner too, when for example he describes “the tumultuous 1940s that robbed us and others of our nations”.

Speaking to MEE, he said: “I wrote this book for my family and for Jewish Arabs, yes. But this book is for all Arabs, first and foremost. In fact, if I had been able to write a book in Arabic, it would have been written in Arabic first.

“And then of course, it is for all humans who reject the overwhelming darkness of these times - the ongoing assault on Palestinian lives and dignity and the sudden rise of fascism in the West and elsewhere.”

Hayoun also says that he wrote the book in a state of intense mourning: “My grandmother Daida, who raised me, had been my intellectual colleague on the project. For many months, we had struggled together to get a publisher, and then three months after we got the contract, she died.”

When We Were Arabs feels like an attempt to metaphorically collect Jewish Arab memorabilia and to freeze them in time, so that they might never be forgotten. Memory is important for the writer, and besides being the title of the final chapter, he also believes in an active role for it:

“Memory can subvert colonial authority, it can frighten the colonisers because it allows us to reconfigure this miserable world we live in now, depose the white supremacist, topple his statue in the public square, and approach the European sector with open eyes, ready to disassemble empire.”

This decolonial memoir is a powerful tribute to heritage, it gives an intimate insight into what it means to be a Jewish Arab, an identity which is today wrongfully deemed an oxymoron.

With this book, Massoud Hayoun pays homage to all the Daidas and Oscars who have been uprooted from their homes, and who have forcefully been made to discard their culture, their language, their dress and their land.

This piece of non-fiction is not only important for its sentimental value, it is also a great tool of information, history and remembering. “Preserving what came before is very important, precisely because so much of my family’s universe died with my grandparents,” Hayoun tells MEE.

“But beneath that layer, this book reshapes - for me and anyone who’d like to join me in these beliefs - the Arab identity. The Arabness I describe is fundamentally diverse and inclusive, it is a reaction to degradation and to oppression, it is beautiful and unapologetic.”

Books
The Olive Trees' Jazz: Algiers poet speaks in music of the senses
Books
Books and bombs: How I healed myself through fiction
Books
Jared Kushner, here are 25 more books you should read about Palestine, Israel relations Books
Egypt's Jews: One writer's homage to a lost history