Ancient teahouses, wine and jazz: A day in Iraq's Sulaimaniyah 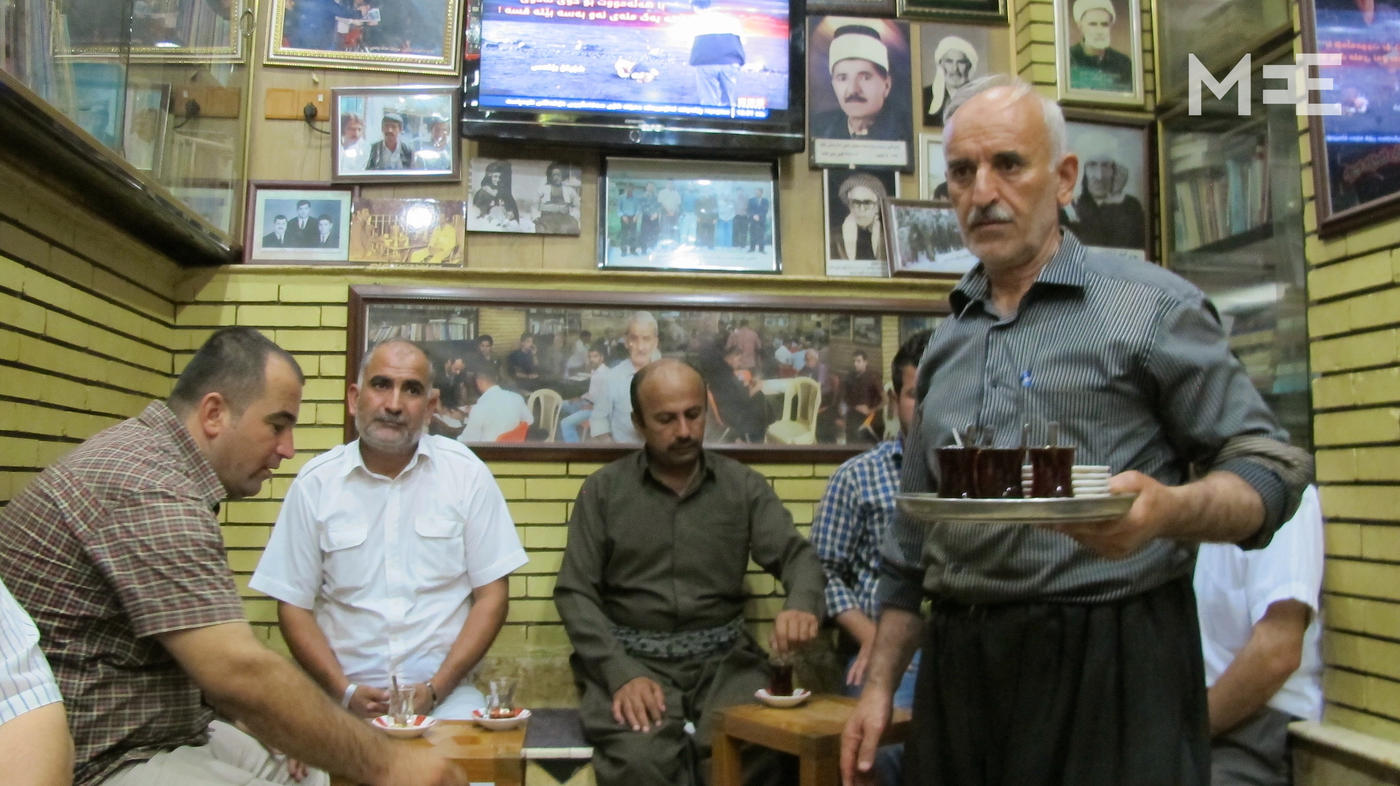 Omar Sharif is the owner of Shaab teahouse, a major meeting point for Kurds from all over the Middle East region (MEE/Karlos Zurutuza)
By
Karlos Zurutuza

SULAIMANIYAH, Iraqi Kurdistan - A hundred conversations melt into one single chorus while domino tiles are slapped hard on the tables. The percussion gains momentum with saucers crashing, and spoons frantically stirring tea inside pear-shaped glasses.

Omar Sharif, the owner of Shaab teahouse in Sulaimaniyah's market district, has been listening to this opus daily since he was a kid. At 65, he still winds nimbly around the tables carrying the packed trays of drinks that keep the “music” playing.

All across the Kurdish homeland, teahouses are the space for men to socialise. Shaab is, by far, the best-known teahouse in Iraqi Kurdistan. And there are reasons for that.

“Since my father opened this place in 1950, it has been a second home for actors, poets, writers, politicians,” Sharif told Middle East Eye while pouring out tea into the latest 10-cup batch. “You see the walls? Their pictures are all over.”

Those familiar with Kurdish life will easily spot some of the most prominent Kurdish figures in either black-and-white or colour pictures and Sharif says that “intellectuals of all kinds” keep showing up.

“Over there is Yasin Barzanji, a writer and a journalist, and you have [well known poet and former Kurdish parliament member] Taib Jabar sitting at the nearby table,” Sharif says as he points around the teahouse.

Jabar says he loves coming here two or three times a week “because it's the best place to meet people”.

“I have tea and then I go to the bookshop,” said Jabar, in reference to a small room just behind the kitchen where four stools have been crammed in underneath tightly packed bookshelves about to collapse.

“A teahouse may look like a strange place to sell books but I cannot think of a better place,” said Halid Gherib, who runs this “business inside a business”.

But while books may seem like a common currency here today, that's not always been the case.

“During Saddam Hussein's rule, Kurdish political or cultural manifestations of any kind where strictly forbidden, so elements from the then-banned Patriotic Union of Kurdistan (PUK) would gather here and distribute pamphlets calling for rebellion against the dictator,” said Sharif during a rare break from duty.

“This very place was considered by the PUK as their main headquarters back in the 70s,” the owner added over a quick cup of tea.

When the Iran-Iraq war broke out in 1980, Shaab teahouse was quickly changed by the conflict. Given Sulaimaniyah's proximity to the border, the city become a haven for Kurdish defectors from the Iraqi army. Many would knock on this teahouse door asking for shelter.

Sharif knew too well what their fate would be if they were caught by Saddam's secret services, so he hosted them on the second floor.

In 1991, however, things for the Kurds changed dramatically. After the Gulf war in 1991 and the establishment of the no-fly zone over Iraqi Kurdistan, people were allowed to operate much more freely.

Shaab catered to Kurds of all political persuasion, many of whom went on to lay the foundations for the autonomous region that has emerged since.

As evening falls and life in the bazaar begins to fade away, Sharif usually starts to close his shutters, prompting his patrons to move on to another Sulaimaniyah institution – Chalak's, probably Sulaimaniyah’s most popular cafe.

Set up in a refurbished classic house, the atmosphere in Chalak's has little in common with Shaab. It's an elegant and cosy two-storey cafe where people meet under a low light matched with jazz music that comes in from the loudspeakers. Here, pictures of old Peshmerga fighters are displayed alongside Kurdish tapestry and canvass paintings. There is even a bike with a basket next to a Louis Vuitton suitcase, and the cafe would not look out of place in many European capitals.

“In fact it's also a restaurant, a wine house and an art gallery,” Chalak Salar, the owner, told MEE.

The 42-year-old set up this place in May 2013 after spending “several years of hard work” in London, although it wasn't until the early 2000s when he decided to come back to Kurdistan.

“I'm originally from Kirkuk [a contested city 100km west of Sulaimaniyah] but the security situation has always been bad there. Besides, people in Sulaimaniyah have the reputation of being much more open-minded and I knew a place like this would fit here,” Salar said, adding that the cafe has exceeded all of his initial expectations.

The place gets crowded almost every day, with the upstairs bar bustling with both local and foreign clients. However, it's not all about the business for the successful entrepreneur. A few weeks after the 2014 killing of thousands of Yazidi Kurds by the Islamic State (IS) group in the northern Iraqi district of Sinjar, Salar collected $31,000 for the refugees by organising events and selling some paintings.

Salar also employs several Syrian Kurds who have fled the conflict next door and now make up half of his workforce. Few are able to return home, where the security situation is precarious and the few Kurdish-controlled enclaves are surrounded by al-Qaeda-linked or IS militias.

While seen by many as an enclave of relative peace and prosperity in an otherwise struggling region, Iraqi Kurdistan has not been totally immune from political strife. In mid-October tensions over unpaid salaries morphed into wider protests, calling on regional president Masoud Barzani to resign. Two people were killed in the northeastern town of Kalar, while 20 were injured in Sulaimaniyah, seen as a bastion of opposition to Barzani and his party.

Falah Salah is an advisor to the president of Iraq, living between Sulaimaniyah and Baghdad. He says he rarely has time to go out, but when he does he always goes to Chalak’s where he can sit and discuss issues with friends and colleagues.

“There are two main reasons behind the unrest. One is that people's salaries have been withheld for over three months now due to the lack of agreement between Baghdad and the Kurdish government on oil exports,” Salah told MEE.

“A second reason lies in the anger of many people after Massud Barzani's presidential mandate expired and no deal has yet been reached for his succession,” the senior official told MEE before labelling the current situation in the Kurdish autonomous region as “dire and full of challenges”.

Yet amidst the turmoil, people are still opening new businesses and patrons continue to flood in.

“The first clubs I ever went to in London were jazz clubs and these inspired [me] so much to own one of my own. I wanted to be the first one to open this door for my people,” said Salar.

The club – which boasts a dance floor, live music and a wide selection of cocktails - has been set up on the top floor of a famous hotel and keeps its doors open from 6pm to 3am. He brings in young talented musicians from as far afield as Japan to play late into the night.

Nevertheless, Salar admits that business back in his restaurant has gone down around 35 percent over the last few months.

“I've even thought of selling everything and going back to London but that would be a very cowardly action to take," he said. "I finally decided to continue doing what I do.” 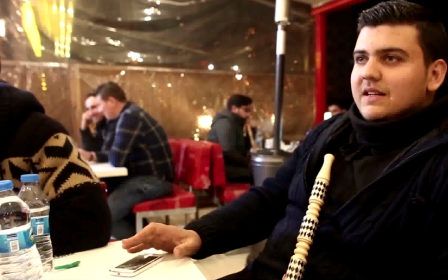 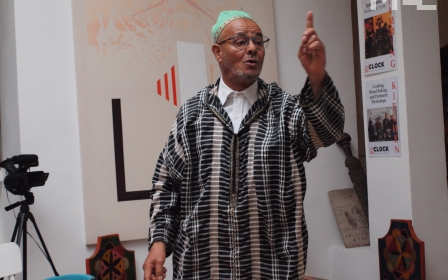