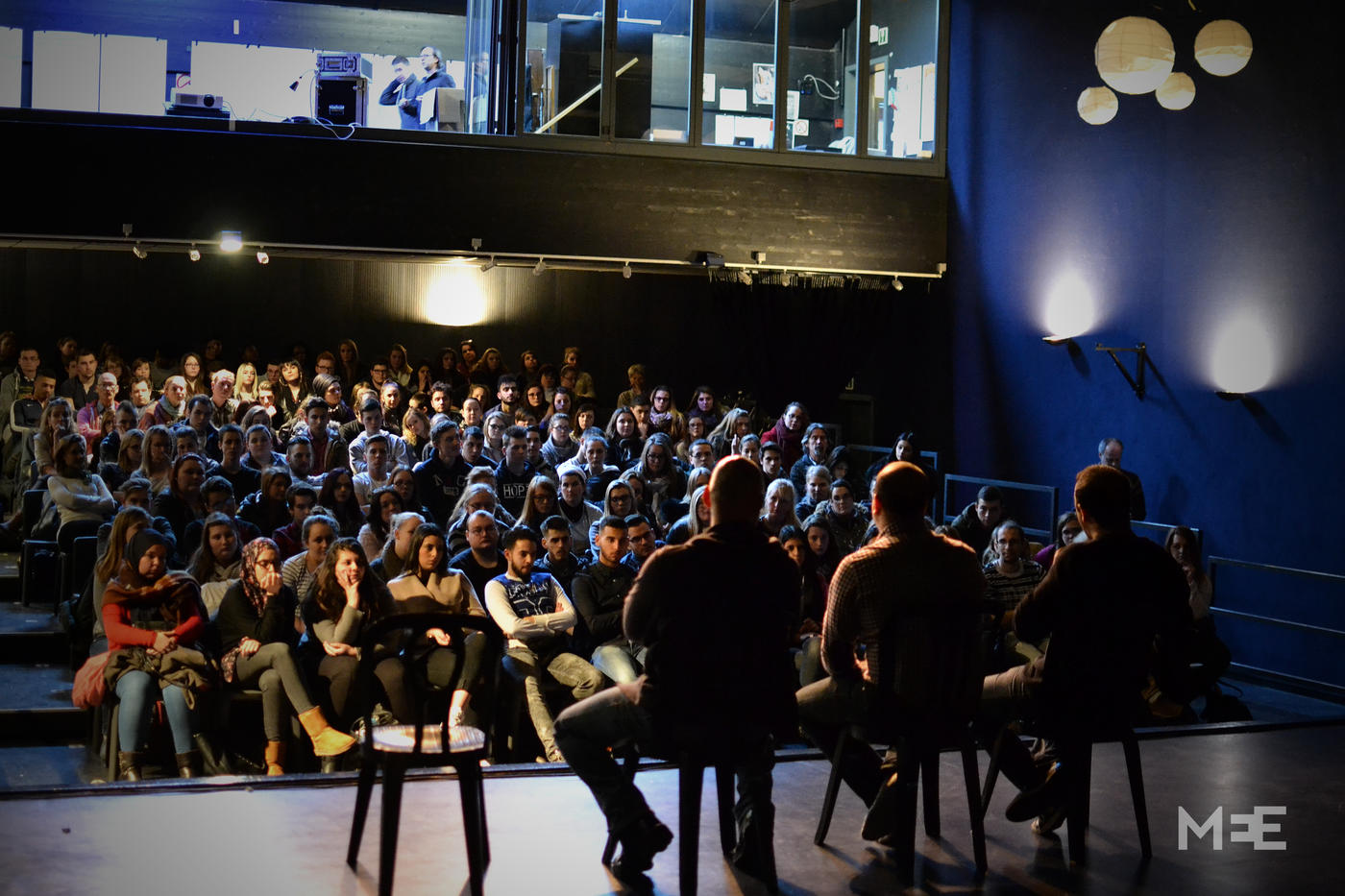 Jihad writer Ismael Saidi, along with his co-stars speak to an audience of school children in Belgium
By
Wilson Fache

Three Belgians walk into an airport.

- “Of course I have taken the razor blades out of my bag,” Reda, a young candidate for jihad in Syria, tells his two friends. “It’s in my pocket.”

- “What?! Throw it in the trash bin right now!” shouts Ismael.

- “Where we are going we won’t need to shave, trust me,” says Ben, the Elvis Presley-loving group leader.

At that last punchline, the audience bursts into laughter.

It has been more than a year since Ismael Saidi imagined the tragicomedy Jihad (in French Djihad), a play about three young disillusioned Belgians on their way to Syria. “It was hard at the beginning. No one understood why we chose to use comedy,” Saidi told Middle East Eye. The challenge was a sizeable one, but his audacity to make fun of such a serious issue was eventually rewarded with success.

He told Middle East Eye that he is already writing Jihad’s sequel and is working on a movie adaptation.

With a total of 124 performances, the play has attracted nearly 45,000 spectators, about half of them school students. To those who dismiss his use of comedy to address such a dramatic issue, Saidi argues that laughter can be an appropriate tool. “It’s the only weapons they [the jihadists] don’t possess. They have the demagogy, the ideology, the physical weapons and internet, but they don’t have culture or humour,” he said.

The day Middle East Eye attends a performance at a cultural centre in the Belgian village of Presles, it is packed. Two buses brought about 200 high school pupils aged between 17 and 21 for the show.

As the black curtains are pulled back to reveal the stage, a wave of laughter breaks out spontaneously in the audience. For 75 minutes, Ismael Saidi, along with co-stars Reda Cheb Choudi, Shark Carrera, James Deano and Ben Hamidou entertain their young audience - but laughter is not the only emotion and reaction this play elicits.

“They laugh, but the dramatic and tragic aspects rise steadily as the play goes on. And I can assure you that at the end, no one is laughing. Some audience members actually cry,” Cécile Vainsel, a cultural adviser to former minister of culture Fadila Laanan, told MEE. “That's a testament to how clever this play is. It's pretty smart because I am not sure we could have touched so many young people with a more serious tone. It is extremely effective.”

Saidi confessed that one of his inspirations for Jihad was the pitch-black British comedy Four Lions, directed by Chris Morris, which depicts the story of a group of Muslim wannabe suicide bombers. “Brits are the first who dared to make fun of this issue,” he said.

Being himself a practising Muslim with a Moroccan immigrant background, the playwright says that for some, having a dual-identity does not mean having two homes but instead, having none.

Like Chris Morris’s satire, Jihad  tells the story of three young Belgian Muslims who have decided to travel to the Syrian city of Homs in order to kill “unbelievers”. They are naive, prone to self-pity or blindly narrow minded, and as they move forward with their quest, the group of friends only finds doubt and death.

If writing what you know is a commonplace piece of advice for writers, it certainly applies to the author of Jihad, who was himself tempted to join an earlier wave of militancy in his youth. In the 90s, recruiters were already preaching militancy in Belgian streets, but for a different journey. "When I was 16, they would try to persuade us to go to Afghanistan. The destination has changed, but the story is the same. They just have the internet this time,” Saidi said.

The playwright said that he knew people who left for Afghanistan, and confessed that he felt tempted himself at one point in time. “They are good salesmen. You feel guilty because they tell you that while your brothers are dying over there, you are doing nothing but playing with video games and smoking pot. You feel ashamed and at one point you start asking yourself: is he right?

"At 16, or even 20 or 25 years old, you are insecure. As long as you haven’t found a goal for your life you keep searching for one,” he said. “It was the exact same situation twenty years ago, that’s what's so scary.”

A breeding ground for terrorists

With a population of 11 million, Belgium has supplied the highest per capita number of fighters to Syria and Iraq in all of Europe. By some estimates, between 350 and 550 Belgians left to join militant groups, with their average age being around 26.

The idea for Jihad came about when Saidi saw French far-right Front National leader Marine Le Pen on a television show. “She was asked her opinion about the young people going to Syria, and she said that she didn’t mind as long as they were not coming back. I was really shocked - that’s not an appropriate answer for a political leader,” Saidi said. “So, because it’s an issue I know, I thought that as an artist the only way for me to reply was to write this play.”

“The idea is to give this label to shows with a pedagogical interest and a high evocative power,” Vainsel, the ministry's cultural advisor, told MEE.

"It is not always easy to take young people to the theatre. They may have prejudices and can be put off, considering the theatre as being a medium tied to their parents’ generation. So humour is a way to attract and hold their attention,” Vainsel said.

However, not everyone appreciates the light tone used in the play, nor the issues it raises. For its premiere in France last June, the cast was welcomed in Arras by police vans and far-right protesters who believed the play was “glorifying terrorism,” according to actor Shark Carrera. “So we decided to invite protesters to see it,” he said.

During the performance, a National Front supporter and self-described "identity activist" used Twitter to share his displeasure online. “People in Arras laugh at a war that claimed 250,000 deaths, 6 million refugees and has created powerful monsters…” the tweet read.

Although written in 2014, the play has also proven effective to address students’ questions regarding the 7 January, 2015 Charlie Hebdo and Kosher market shootings and, less than a year later, the Paris attacks.

“Some of our students had a lot of questions about the recent events in Paris and Brussels. So we thought it would be appropriate to assist with this kind of play as a way of addressing the questions and concerns of youngsters,” arts teacher Marie-Carmen Caballero explained.

In the aftermath of 13 November, France’s tiny neighbour Belgium, and Molenbeek in particular, came under the spotlight when it was revealed that at least four of the terrorists involved were Belgian citizens or had lived in Belgium.

All of them are believed to have visited Syria in recent years.

Of course, radicalism did not wait for the Syrian bloodshed to take root in Brussels and elsewhere. If Belgium is labelled as a “breeding ground for international terrorists” by international media, it is because the growth of violent militancy has been an issue for decades.

In 2003, a Belgian court sentenced an al-Qaeda militant to a 10-year sentence for plotting to attack a NATO base in Belgium. Seventeen others were also convicted, including a Tunisian-born Belgian citizen accused of aiding the killers of Ahmed Shah Massoud. The legendary Afghan commander, who led opposition to the Taliban, was blown up two days before 9/11 by two suicide bombers carrying stolen Belgian passports.

When organised for schools, performances are always followed by a debate. Occasionally, an Islamic scholar, a journalist and even a militant’s family member join the cast on stage to answer the students’ questions.

Geraldine was working when she received a text she will never forget. “Be proud of your son, he fought like a lion,” the message read. Anis, her 18-year-old son, had left Belgium for Syria more than a year previously. He was killed in the eastern city of Deir ez-Zor on 23 February, 2015.

Since her son’s death, Geraldine has taken a public stance against radicalisation in Belgium, meeting with other foreign fighters’ family members and government officials. She also took part in a dozen after-performance debates.

“This play is great because it allows us to start the dialogue. It helps breaking taboos. No one dares to speak about these issues, but thanks to this play we do,” Geraldine told MEE, arguing that laughter is useful to break the ice with young people. “It won’t have the same impact if it’s an expert who talks to them about jihad for two hours,” she added.

“It’s very funny and realistic. Our kids weren’t dumb, but it’s the same pattern: a group of friends leave together, arrive over there [in Syria] and progressively some die while others realise that’s not what they wanted,” she said.

When one student asked Saidi’s opinion about the Belgian militants who left for Iraq and Syria, he turned to his fellow cast member Reda Cheb Choudi. “Wanna answer that question?” Saidi asked.

For his audience, Cheb Choudi had one question: are "jihadists" monsters, or are they just people who have committed monstrous acts? “My cousin died in Syria. I don’t condone what he did, but I know for a fact he wasn’t a monster,” he said, adding that he didn’t know whether or not his cousin had committed crimes before being killed.

Asked if he believed that militants are also the victims of their recruiters, Saidi agreed, but warned that “they stop being victims when they become murderers”.

“You cannot say that a Bataclan shooter is a victim. He is a criminal. The only victims are the killed and the wounded. But I want to understand the others, those who haven’t left yet. I want to anticipate the societal factors that may most heavily influence them so it can finally stop,” Saidi explained. “If they don’t go, they won’t come back to kill.” 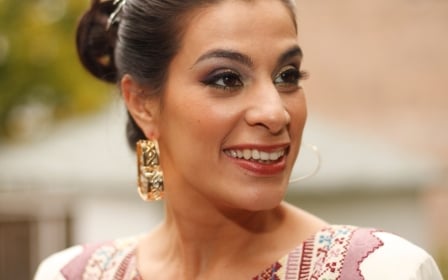