The big screen saver: How cinema is providing hope for Gazans

The Al-Samer cinema re-opened after 50 years for the premiere of Gaza's first full-length feature. For most of the audience, it was a new experience 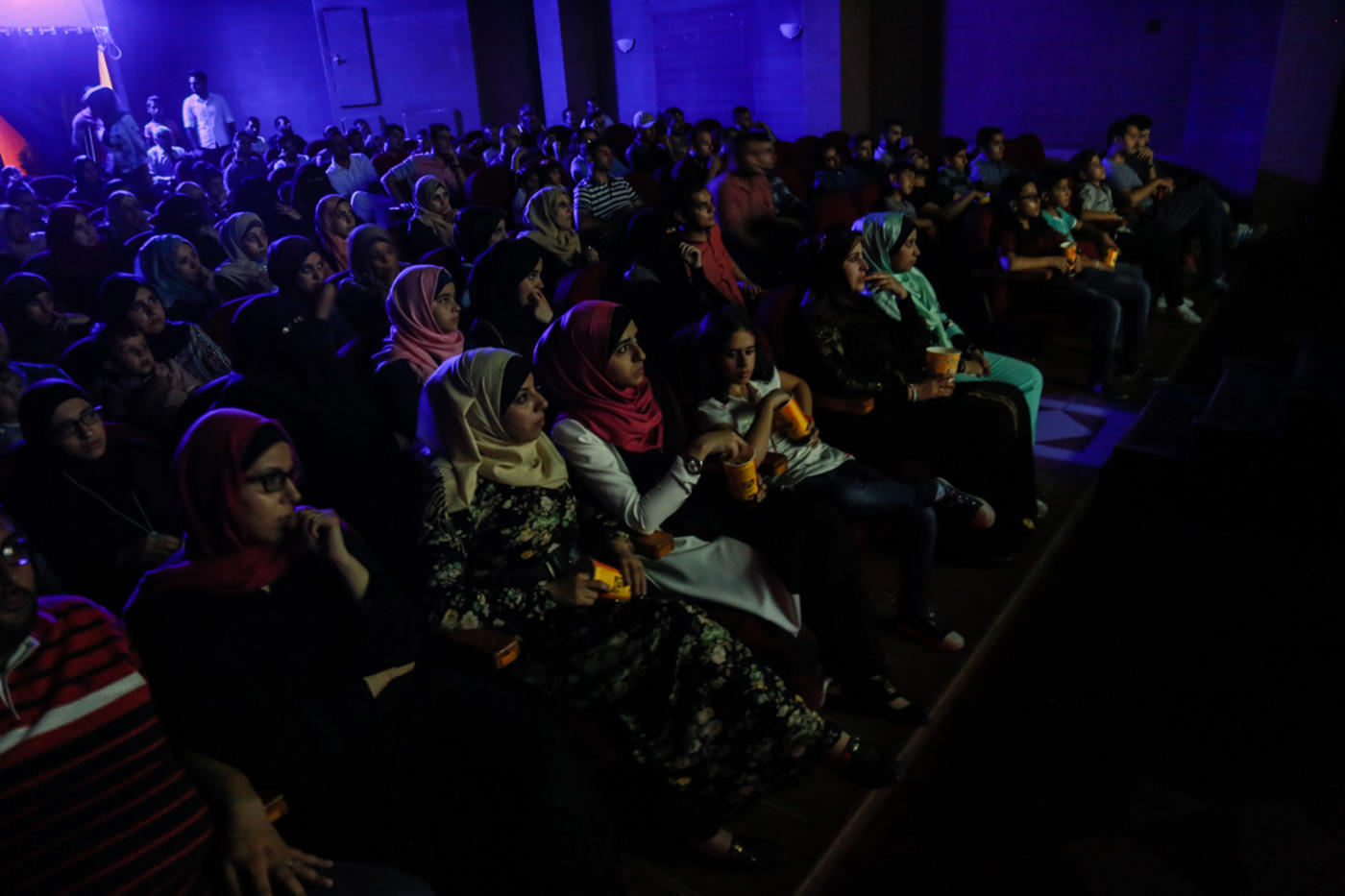 A packed house at the Al-Samer cinema in Gaza during a special showing of Ten Years, the first time the cinema opened in 50 years (MEE/Abed Khaled)
By
Jehad Ahmad

GAZA - It has been 30 years since Gazans have enjoyed the communal experience and joy of watching a movie at a cinema. The residents' lives are blighted by power cuts - a crisis that was precipitated by the Israeli bombing of the territory's power plant in the 2006 war.

Gaza relies on electricity purchased from Israel and Egypt, sources that are unreliable at best, and with hospitals running out of power, entertainment literally takes a back seat.

Al-Samer Cinema, the oldest screen in Gaza, reopened for only one day on 26 August for Palestinians to attend the first screening of Ten Years, a film produced by a company in the Gaza Strip.

The Samer was established in 1944 but closed after the Israeli attack on Gaza in 1967. Following the war, other cinemas were reopened but Al-Samer remained closed. With the outbreak of the first Palestinian uprising in 1987, all cinemas were closed.

Most young Gazans have never experienced watching a film in a cinema, while for older residents it is a distant memory.

The cinema is equipped with a large screen and about 300 seats, which were packed with people who came to support the idea of reviving cinemas in the Gaza Strip.

“The film talks about the issue of Palestinian prisoners in Israeli jails, and it lasts for two hours and a half," Ghada Salmi, the media coordinator of the film company, said.

"We chose to have the premiere of the film free at the Samer Cinema, a symbolic place, in an attempt to recreate cinema in Gaza. A group of critics and specialists in the field of television and cinema also attended the premiere," she added.

The premiere of the film received widespread media coverage and won the admiration of critics, who considered it a breakthrough in the production of full-length films in the territory, which has been under blockade from Israel and Egypt for years.

"The film won my admiration, being produced in the Gaza Strip, which suffers from a lack of material resources and the absence of a fertile environment for filmmaking, and deserves to be supported and encouraged," said Abed Alhakim Abu Daqen, one of the attendees at the premiere of the film at Al-Samer Cinema.

"It is a strange and new feeling to sit there and watch a film after all these years,” he said.

The Palestinians watched the film silently, occasionally dipping into snacks and drinks bought outside. The newly opened cinema is not yet ready to sell snacks to customers.

Haneen Samara, who attended the premiere of the film, sat next to her friend smiling.

"It's good to reopen the cinema in the Gaza Strip. We hope [other] cinemas will be re-developed and reopen because the Palestinians need the change and to experience the cinema," she told Middle East Eye.

A dream for 24 hours

The reopening of the Samer Cinema after its 50-year closure lasted just one day.

The Palestinian Ministry of Culture closed the venue the next day, as it was not yet equipped for processing and screening films. However, members of the audience saw it as a first step toward reactivating cinema culture in the Gaza Strip.

The filmmakers decided to show Ten Years again during Eid al-Adha on 2-4 September at a theatre in Gaza, and this time sell tickets at a cost of $5.5 for Palestinians to book.

There was a much smaller audience for the screening at the Said al-Almesshal theatre in Gaza City on Monday night, compared to its packed first showing at the old Samer Cinema. The cost of the tickets was clearly a turn off for some.

Bara’a El Ghalayini attended the film on the fourth day of Eid al-Adha, and the last showing in Gaza.

"I did not have a chance to attend the movie at Samer Cinema, but watching it in a theatre is certainly not the same feeling as watching it in a cinema," she told Middle East Eye. "I hope I experience this [in the future]."

We need to strengthen this culture, because it gives us the right of entertainment, rather than darkness - the electricity crisis - which we suffer from in the Gaza Strip

Amal Abu Assi was sitting beside El Ghalayini enjoying some popcorn, which she said she bought outside the theatre.

“I know that we do not have a cinema in the Gaza Strip equipped with a food hall like the cinemas abroad," she told the Middle East Eye.

"We hope that there will be a plan to develop the cinema in Gaza. We need to strengthen this culture, because it gives us the right of entertainment, rather than darkness - the electricity crisis - which we suffer from in the Gaza Strip,” she added.

Even though the attendees were few, some of them were optimistic. Women and men attended the film with a good number of children at Al-Almesshal theatre.

Mohammed Abu Raya, sitting next to his wife and son, explained that he had come to watch the film for entertainment.

He was bored staying at home where the family suffers from power outages like the rest of the Palestinians in the Gaza Strip.

"Watching the film in these halls breaks the routine of our lives in the Gaza Strip because of the electricity crisis and many other problems, but we are looking for real cinemas in Gaza," he said.

"Of course, watching a film made in Gaza makes you proud of your people. Yet to encourage these works you have to re-develop and open the closed cinemas," he added.

Atef Askoul, director general of arts, heritage and programmes in the Hamas-run Palestinian Ministry of Culture in Gaza, explained the reasons why Gaza has not had cinemas for so long.

"The real reason behind the closure of the Samer Cinema is the Israeli aggression on Gaza in 1967, it has remained closed since then," Askoul revealed.

"Al-Samer cinema and seven others in the Gaza Strip are owned by the private sector, not by the government. However, after the death of their owners, problems arose among the heirs, and other legal problems that have not yet been solved, so it is still closed.

"These problems have prevented the plan of rehabilitation and reconstruction of cinemas, such as Al-Samer, which was bombed by Israel in 1967, and was burned again as a result of internal fighting between Hamas and Fatah in 2006," Askoul said.

"The production of the first dramatic long film in the Gaza Strip encouraged its superiors to present it for free for one day only at the Samer Cinema.

“The Hamas government agreed to this, as a call to revive cinemas and to encourage the film industry in the Gaza Strip," he added.

"We need to develop the film industry in Gaza and invest in this area so that we can prepare a plan for the rehabilitation and development of cinemas in Gaza," he said.

"The film talks about the lives of prisoners in the Israeli jails. It took six months to film and at least seven hours of filming a day," he told Middle East Eye.

It took about eight months to make the film, including editing and post-production, all of which happened in Gaza.

"The geography of the film talks about a story going on in Egypt, Jaffa and Gaza Strip, and we could hardly find suitable photograph shooting sites in Gaza," Alaloul explained.

"Some of them were created by the set designer who had to reproduce the locations in Gaza, since going to the locations to film was not possible due to the blockade," he added.

"We also had difficulty with the electricity issue, since photography needed lighting and decoration, and we tried to overcome that problem by alternative generators, also the same problem occurred in the film editing process."

But despite these obstacles, Alaloul believes there is a future for film-making in the strip. "We want to encourage businessmen to invest their money in making feature films in Gaza at a time when there are no special academies to teach filmmaking here," said Alaloul.

"There are difficulties in Gaza. First, the weakness of the locations for filming. Second, the absence of prominent representatives able to market the film. Third, the lack of Palestinian viewers' confidence in the local product. Finally, the problem of electricity that affects the film industry," he concluded.