Cannes 2018: Reclaiming the Arab narrative one film at a time

Middle Eastern films had a strong presence in this year's edition, with Nadine Labaki’s Capharnaum winning the third-place Jury Prize 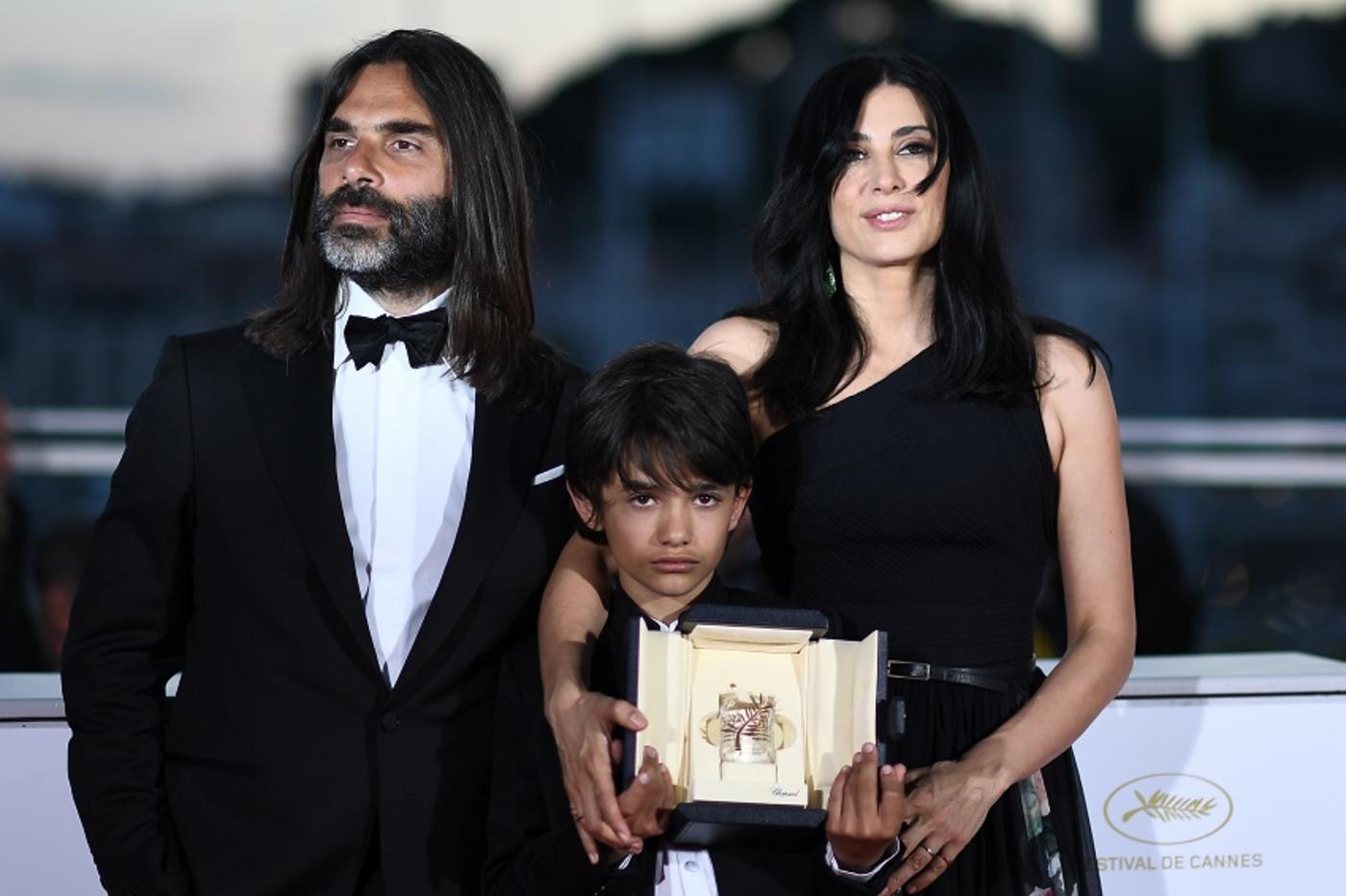 Lebanese director and actor Nadine Labaki poses with her husband Khaled Mouzanar and actor Zain al-Rafeea after Labaki won the Jury Prize for "Capharnaum," at the Cannes Film Festival, 19 May (AFP)
By
Joseph Fahim

CANNES, France - The 71st Cannes Film Festival started on the most surreal of notes: Donald Trump pulling out of the Iran nuclear deal on 8 May as the world's biggest film festival opened for the first time with a film by Iranian filmmaker and two-time Oscar winner Asghar Farhadi.

Ironically, the film, Everybody Knows, a slight, bloated Spanish whodunnit thriller and family drama, earned Farhadi the worst reviews of his career.

As immaculately draped film stars danced through the night to the blaring music echoing from every corner of the luxurious southern French resort town, one could not help but sense the schism between Cannes and the real world, a schism amplified by the festivals rigid fashion rules, including black tuxes and bow-ties for men and high heels for women.

A mirror to reality

Yet over the next 11 days Cannes swiftly emerged as a mirror to the stark realities of our turbulent world.

Without exception, all of the winners of the 71st edition of the festival addressed a wide assortment of social, political, and economic adversities: from the neoliberalism-induced poverty in Hirokazu Kore-eda’s Japanese Palme d’Or winner, Shoplifters; and the resurrection of the Ku Klux Klan in Spike Lee’s American Grand Prize winner BlacKkKlansman; to the lawlessness of the mafia-controlled districts of southern Italy in Matteo Garrone’s best actor winner, Dogman; and transgender rights in Belgian Lukas Dhont’s Un Certain Regard.

Cannes, many observed, was gunning for relevancy, not only in the geographical diversity of its selection, but by including various newcomers in its different selections. It was inevitable that the Middle East would figure in heavily in this year’s edition, securing prized slots in the competition and informing various European productions.

The strong collective impact these films had on the festival is undeniable. While some pointed to a brighter future for Middle Eastern narratives, others proved the creative rut Middle Eastern filmmakers - and particularly Arabs - have been entrenched in for decades may still require considerable time to be shattered.

The breakout Middle Eastern hit of the festival was also one of its most liked. Nadine Labaki’s Capharnaum – winner of the third-place Jury Prize – marks a radical change of direction in the course of one of the Arab World’s most popular filmmakers.

The glossiness and effervescence of Labaki’s first feature-length movie Caramel (2007), followed by Where Do We Go Now? (2011), are nowhere to be seen in this harrowing account of an 11-year-old Syrian boy hustling through the streets of Beirut after he runs away from home. Later on, he finds himself in charge of an Ethiopian baby when the mother of the latter suddenly disappears.

The impressive production values and immediacy of the topic at hand could have elevated Capharnaum to the fore of Lebanon’s greatest films, if it weren’t for two grave misgivings: an overly sentimental and artificial framing device in which the boy sues his irresponsible parents for bringing him to life, and the local police’s abrupt heroic intervention by the end of the film. Still, that doesn’t take away from the skill and ambition on display. Labaki should be lauded for placing a real Syrian street child and an Ethiopian worker at the centre of her film.

Of 21 films competing in the official competition, only three were directed by women, including Labaki's Capharnaum. Ahead of the premiere of French filmmaker Eva Husson's Girls of the Sun, jury president Cate Blanchett led a silent protest of 82 women on the red carpet, highlighting the lack of female filmmakers selected for the festival’s prestigious Palme D’or competition. Only 82 films directed by women competed in the main competition in the festival's 71-year history, as opposed to 1,645 directed by men.

A three-hour intimate epic about a young aspiring novelist returning to his rural village after graduation to face a future riddled with uncertainty, Ceylan’s latest doubles as both a Chekhovian family drama and a covert commentary of President Recep Tayyib Erdogan’s Turkey. It’s far more talkative than his earlier slow, meditative films, with dialogue taking centre stage instead of sweeping visuals.

The Wild Pear Tree is the Turkish master’s funniest film to date. It’s also his most political, tackling with delicacy the growing influence of religion and generational conflict.

Ceylan – the last Middle Eastern filmmaker to win the Palme d’Or in 2014 for his film Winter Sleep - is seen as an established auteur of world cinema whose films are not bound by borders or politics.

Less ambitious if equally poignant and shrewd is Iranian Jafar Panahi’s Three Faces, his fourth film made since he was banned from directing in 2010. The film’s co-writers Nader Saeivar and Panahi shared a prize for best screenplay with Italian writer-director Alice Rohrwacher's Happy as Lazzaro.

The film directed by Panahi is about a video of a young acting student committing suicide after her idol, famous Iranian actor Behnaz Jafari (playing herself), casually ignores her plea for help. This sets Panahi (also playing himself) and Jafari on a road trip, in a nod to the late Iranian filmmaker Abbas Kiarostami, to verify the truth behind this story.

For the larger part of the film, a galaxy of dense, controlling male characters surface, and for the first hourThree Faces feels as though it is another familiar stab at the Persian patriarchy. But then a third story of pre-revolution star Shahrazade is introduced and the film suddenly transforms into a perceptive study of artistic autonomy and female independence.

The reclusive Shahrazade, who never appears on screen, becomes a silent symbol of resistance, a mythical figure who fought and succeeded in living by her own rules in a place where individuality is difficult to attain.

Three Faces may not be as refined or intellectually probing as This is Not a Film (2011), or not as blithe and carefree as Taxi (2015), but its charm and emotional generosity make it another worthy addition to the cannon of one of Iran’s greatest living filmmakers.

Working with more traditional tropes is Tunisian Mohamed Ben Attia with his sophomore effort, Weldi (Dear Son), which bowed into the Directors' Fortnight section. Weldi is a somber chronicle of a family struggling to accept their son’s joining of the Islamic State (IS) militant group.

Ben Attia hints at economic disappointments in the post-Jasmine revolution partly responsible for making Tunisia one of the biggest exporters of IS fighters, according to some estimates.

But he refrains from spelling out the son’s motivations, or delving into the general social causes. Taking a leaf from French director Jacques Becker, Ben Attia relies on glances, body movement, and softly-spoken dialogue delivered skilfully by his leading actors. However, one hopes he will take on more original subjects in the future.

Far less successful were the two Un Certain Regard debut features by Syrian Gaya Jiji and Moroccan Meryem Benm’Barek. Set on the eve of the Syrian War, Jiji’s My Favorite Fabric, starring Manal Issa, is a quasi-provocative account of a sexually frustrated young woman who finds an outlet for her fantasies and desires in her neighbour’s brothel.

Dubbed the Syrian Belle de jour, My Favorite Fabric lacks both the bite and daring sexual politics of Luis Buñuel’s 1967 thematically-similar surrealist masterpiece. There are some sporadic engrossing visual flourishes that distract from the thinness of the content, and the director’s feminist take on sexual liberation is essential to our time.

Ultimately though, My Favorite Fabric is a film with a confused vision: a disjointed and, at times, inane affair that frequently descends into parody. Jiji paints sex in a dangerous and perverse light. It is an outdated and dull approach. The war backdrop, meanwhile, is utterly pointless, adding nothing to the course of the drama.

Benm’Barek’s Sofia, on the other hand, is more coherent, yet it is more stale and far less accomplished visually. It is a film about the titular daughter of an upper-class family who gives birth to a baby out of wedlock to an unidentified father.

Benm’Barek’s mystery-laden story is refreshing in refusing to solely place blame on the girl, churning out of this predicament a tapestry of class disparity and moral ambiguity in a patriarchal society rife with hypocrisy and deceit. Putting the dynamics of the story aside, there is nothing remotely new in Benm’Barek’s routine themes that have been central to North African cinema for the past 30 years. Hampered by hammy performances and dialogue culled from Egyptian soap operas, Sofia feels redundant and reductive.

The 2018 edition of the Cannes Film Festival gave space for different narratives and visions to shine. Yet the one film that presented the most revolutionary ideas about the Middle East and the Arab World specifically was non-Middle Eastern. At the age of 87, Jean-Luc Godard is still creating some of the most envelope-pushing cinema there is.

In Le livre d'image (The Image Book), which won a special Palme d'Or award, the legendary French-Swiss filmmaker has crafted a typically elusive, contemplative and wistful memento mori to cinema. The essay film is comprised almost entirely of footage ranging from landmark Western classics such as Nicholas Ray’s Johnny Guitar and Jean Cocteau’s Testament of Orpheus, to snippets of IS videos and football games. The first half is almost entirely framed from a white Western perspective, nonetheless, which has informed the global understanding and perception of cinema in the past century.

Godard takes an unexpected turn in the second half, and in a series of jolting sequences, a barrage of carefully edited images from the Arab cinema playbook: from Egypt, Youssef Chahine’s Bab al-Hadid (Cairo Station, 1958), Jamila al-Jaza'iriyya ( Jamila, the Algerian, 1958) and Heya Fawda (This is Chaos, 2007); and from Tunisia, Nacer Khemir’s Wanderers of the Desert and Férid Boughedir’s Halfaouine are introduced and contrasted by the stereotypical representation of Arabs found in the likes of Italian Pier Paolo Pasolini’s 1974-Moroccan shot, Arabian Nights.

“Islam holds the world politically,” Godard says at one point, “yet the Arab world is still being seen as one country.”

The last chapter of The Image Book transpires as a deconstruction not only of the Arab narrative imparted by the West since the invention of cinema, but of the occidental control of cinema history. Arab cinema has always been ignored by Western historians and academics. The images introduced by Godard in here are unknown to most Western critics who waxed poetic about the film.

The Image Book is not only a plea to reframe cinema history and reclaim the Arab narrative, it’s a confrontational look at the prejudices and ignorance of Western culture. We can’t have a future if we don’t know our past, and as indicated by Godard, the future is in the Arab world. Culture
Cannes 2018: The year Middle Eastern cinema made its mark