This Egyptian tried to kill himself due to bullying. Now he is fighting against it

Once, Mostafa Ashraf was bullied relentlessly. But he vowed not to be a victim, fought back and has founded an organisation that helps others CAIRO – Dressed in casual clothing and sneakers, Mostafa Ashraf is a young man with a kind face who always wears a smile. He dreams - of an Egypt that one day will be free of bullying.

Ashraf lost his best friend to suicide caused by bullying at school. Later he would try to take his own life as a result of the same bullying that drove his friend, Jasmine, to kill herself.

“Jasmine was always upset and depressed a little before she was 12," he recalls with sadness. "She didn’t even share with me what was going on, only mentioning she was bullied.

'It was a very dark time for me. I was always alone, never really wishing to interact with others, which made them get to me'

“I lost the only person I could talk to. I got depressed afterwards and I exhibited anger management behaviour."

What started as a painful and shocking experience for a child led Ashraf, years later, to found Advice Seekers, a self-funded organisation that combats bullying.

“When I was almost 11, I used to get bullied a lot because of my looks. Wicked kids also made fun of me as I would speak English most of the time for my Arabic was weak,” he says.

Ashraf attempted to kill himself twice.

“It was a very dark time for me. I was always alone, never really wishing to interact with others, which made them get to me."

When he was 14, Ashraf tried to take his own life by slitting his wrist but his friend stopped him just in time.

“That night I slept over at his place because we had a school project coming up. He stayed awake all night watching over me, fearing that I would repeat my attempt,” says Ashraf.

“What he did made me think that I should be helping others rather than kill myself.”

At the time, Ashraf did not resort to any kind of therapy but rather depended on his supportive father. But four years later, he became severely depressed and attempted to end his life again.

'Helping lots of people felt good, but sometimes you could help others and fail to help yourself'

“Helping lots of people felt good, but sometimes you could help others and fail to help yourself,” he says.

“I tried to suffocate myself using a pillow, but it didn’t work out. Then I tried to cut my wrist, and I also failed."

“At the age of 18, I totally broke down and I started seeing a psychologist and I kept taking psychotherapy sessions for a while to get treated for depression, which helped a lot."

When he founded Advice Seekers in 2014, Ashraf only promoted the organisation online, yet he soon realised he wanted to have a presence on the ground.

“I kept posting tips on how to combat bullying…and I received messages from victims that I answered relying on my personal experience."

How to beat a bully

Although many schools rejected Ashraf’s attempts to give presentations when they learnt of his age, he did not give up.

“I took one year off from school as I had finished all the subjects of grade 12 in grades 10 and 11, and I studied psychology courses. When I realised I had a fear of confrontation, I learned skills of public speaking as well as people’s body language."

The initiative developed slowly until, one year later, Modern Academy, the computer science and management technology school in Cairo's Maadi, opened its doors to Ashraf, offering him the chance to start an anti-bullying campaign on campus.

As things progressed, Ashraf was joined by several volunteers and they became anti-bullying consultants for a number of private and international schools in Egypt. Ashraf was almost 18 at the time.

Now Ashraf, who will soon turn 21, works as a freelance video editor when he is not doing his advocacy work. Even though he was offered scholarships from prestigious universities in the US and England, he has decided to not pursue higher education in order to dedicate his time to Advice Seekers “at least for the time being”.

Students speak of the positive influence he has had on their lives.

“I was a victim of bullying and I thought about suicide every single day," a middle school student, who declined to mention his name or his school for fear of being bullied, told MEE.

"I always sought excuses to skip school even though I was a straight-A student. I usually kept to myself, but after I communicated with Advice Seekers volunteers, I felt much better. They taught me how to stand up for myself.”

'I always sought excuses to skip school even though I was a straight-A student. I usually kept to myself, but after I communicated with Advice Seekers volunteers, I felt much better. They taught me how to stand up for myself'
- Middle school student

The volunteers from Advice Seekers carry out a range of during their school sessions that differ depending on the age of the participants: for example, roleplay is offered to students in to grades three to six.

“We interact with the students, asking the teachers to roleplay with them about bullying scenarios," says Ashraf. "We also play short films produced by the organisation on bullying.

“Children usually go way off course, so I get teachers involved. I play two scenarios when in one I’m the bully and another, a teacher is the bully.

There is also a favourable scenario when a teacher acts as if he bullies Ashraf, and he responds in a good way.

“For instance, if a bully tells me ‘You are ugly,’ my answer would be: ‘You see me this way, but I believe I’m handsome'.

"In another scenario, I answer saying: ‘You are the one who is ugly.’ At this point, I ask the participants about what the right response is."

A third scenario, he explains, depicts physical bullying. “For instance, a teacher pushes me, and I push back. Out of this, we teach the students that violence is not the answer and that hitting back makes a person a bully too." 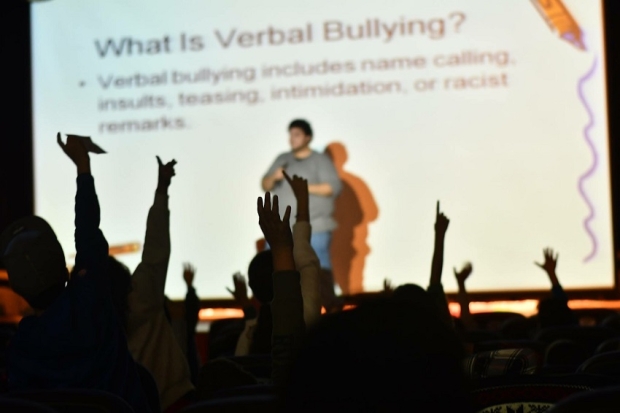 UNICEF defines bullying as “a form of aggressive behaviour that occurs in an intentional and repeated manner causing another child to feel hurt”.

Bullying can take multiple forms including:

Cyberbullying involves posting or sending electronic messages including text, pictures or videos to harass, threaten or spread rumours about another person via digital platforms such as social networks, chat rooms and blogs.

What the schools say

Professionals who work at Egyptian schools are wary of speaking to the media about bullying. But some did on condition of anonymity.

According to one psychologist and counsellor at an international school in Cairo, both bullies and those they bully are “victims”.

“Usually bullies were subjected to psychological ordeals and oppression that led them to act in such a way,” she told Middle East Eye. “Some got bullied themselves before, whether by their peers or by oppressive parents or siblings.

“We handle a bully by tackling the feeling that led to the bullying behaviour…but unfortunately, bullies mostly don’t resort to counselling."

One high school principal, also at an international school in Cairo, who declined to be named, said: “In most cases, I use guidance and advice with bullies…and in many cases they back off.  But if the act is repetitive, the bully is referred to the school counsellor.

“We resort to suspension in cases of physical bullying, which are not as common as verbal bullying.

She said that even though not a single day passes without her receiving at least five to 10 complaints of bullying “90 percent of the cases are not reported, mainly out of fear of the bullies”.

In an interview last September with Egyptian TV presenter Amr Adeeb on MBC Misr, Hala Abu Khatwa, the communication manager at UNICEF Egypt, said that about 70 percent of schoolchildren in Egypt aged 13 -17 have been subjected to bullying, making it a common phenomenon in the country.

For Advice Seekers, holding campaigns at public schools is not an easy job.

“We proposed to hold sessions at public schools before and when we were asked about the material of the session, we faced rejections. They told us we can’t talk about depression, self-harm or suicide,” he says.

“How am I supposed to warn kids about the consequences of bullying, then?"

In September, a few days ahead of the new academic year in Egypt, the government-backed National Council for Children and Motherhood (NCCM) sponsored the first national campaign, advocating an end to peer-to-peer violence.

The initiative, in partnership with the Egyptian Ministry of Education and Technical Education (MOETE) in cooperation with UNICEF, was funded by the European Union (EU).

A number of national celebrities as well as actors Ahmed Helmy and Mona Zaki - ambassadors for UNICEF Egypt - echoed the campaign messages on social media and shared their stance against bullying.

Campaign materials encouraged children and young people around the country to voice their experiences, views and ways to end bullying using the campaign hashtag #IAmAgainstBullying.

Teachers can be bullies as well

But it's not only students who can be bullies - there is also the issue of teachers.

During the last week of November, 18-year old Iman Saleh took his own life by leaping off a balcony in Alexandria.

In a voice message she had sent earlier to a friend of hers, she complained of school supervisors who had made fun of her dark complexion, her hair and the way she dressed, telling her she looked like a boy and questioning her femininity.

The victim’s mother reported the school supervisors to prosecutors, accusing them of causing her daughter’s suicide. There is still an open investigation pending.

In the same week as the death of Saleh, a teacher bullied and mocked an eighth-grade child named Basmala Ali at a Damietta school in north-western Egypt.

State-run news site al-Ahram online quoted Ali as saying that her Arabic teacher left her in tears after “he referred to [her] as ‘black’ in a question for classmates to identify the grammatical inflection in the sentence ‘Basmala is a black student.’”

Because the parents took action and reported the incident to both the education ministry and the prosecution, the teacher was suspended, interrogated and even remanded in custody for several days. His fate is yet to be determined.

With campaigns such as Ashraf's raising awareness about widespread bullying in Egypt, the question is, can it be ended?

“People always tell me that I have been holding campaigns for five years now and bullying has never stopped,” Ashraf says. "My answer is: bullying will never end. You have generations and generations to come that will start bullying others.

“We can’t stop it but we can prevent it from happening by raising awareness and standing up for the person getting bullied. 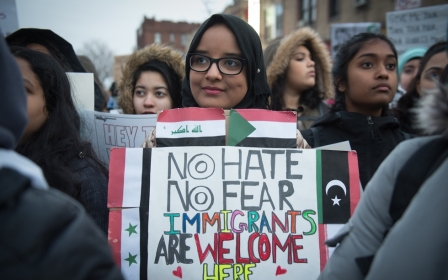