Egypt's food price crisis: 'How are we supposed to eat?'

Even the middle class cannot afford the constantly increasing food prices, saying that they don't know how long they can bear it 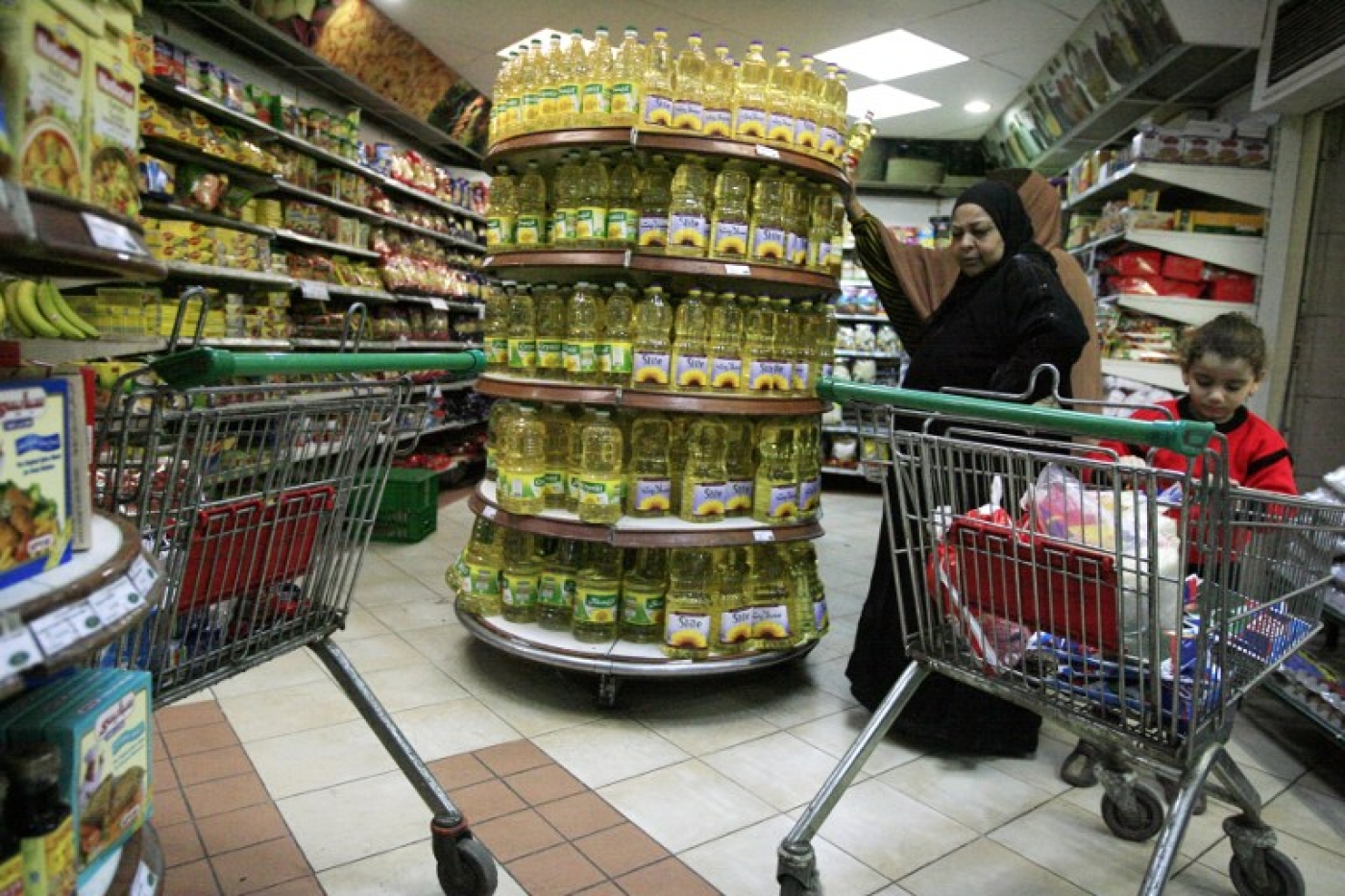 An Egyptian woman looks at goods at a supermarket in Cairo on 12 March 2008. Food prices have soared in Egypt since November 2016 (AFP)
By
Mohamed Mahmoud

CAIRO - “[Cooking] oil is more expensive, the sugar too, and now the bread.. how are we supposed to eat?” said 60-year-old Ali El Sayed. The former accountant is having a hard time making ends meet.

“The worst thing is to be unable to feed your family. No one feels the suffering we live in," he added.

‘The worst thing is to be unable to feed your family’

The government has cut food subsidies several times in the last few months, causing anger and frustration for 70 million Egyptians that benefit from the ration system. Earlier this month, Egyptians held demonstrations in Alexandria and Giza against the latest bread subsidy cuts, chanting "we want bread” and “everything but a loaf”.

The Ministry of Supplies has reduced the daily quota of subsidised bread loaves that bakeries are allowed to dole out to cardholders to 500 instead of between 1,000 and 4,000 loaves a day; though a separate electronic card scheme was not affected.

In an attempt to curb protests, the supply minister Ali Moselhy promised to resolve the bread issue within 48 hours on 8 March, while still defending the decision to reduce subsidies. However, many Egyptians still complain that the situation has not improved.

"We forgot about meat and other expensive food, but we cannot forget bread," said Saied Nabil, a 50-year-old government employee currently living in Alexandria.

"Bread is essential in all of our meals. It's been part of our diet for ages,” he added.

'We forgot about meat and other expensive food, but we cannot forget bread'

Considered a main component of the Egyptian diet, bread has always been an explosive issue. Since the subsidised food system was implemented in the 1950s under president Gamal Abdel Nasser, Egyptians have become dependent on the ration system. In the past, many violent protests have centred around the commodity, which has even caused Egyptians to kill each other for a state-subsidised loaf.

Under the late president Anwar al-Sadat, an attempt to raise bread prices in 1977 caused major riots, and in 2008 Mubarak also faced protests in response to bread shortages.

Sayed receives a monthly pension of 947 Egyptian pounds ($50). In the last six months, efforts to renew his ration card have been futile because of bureaucratic procedures that have caused endless delays.

‘How are we supposed to eat?’

For Sayed to ensure that his entire family is fed, he needs to buy 10 loaves of bread per day from local markets whose prices are much higher than state-run shops. For each loaf of bread with mainstream prices, the cost ranges from 30-75 piastres, depending on size and quality. In the government's subsidies programme, each loaf costs approximately five piastres.

Some state officials have downplayed the frustration felt among its citizens and have asked people to be more understanding of the deteriorating Egyptian economy.

“With a very tight state budget, this is what the state can grant. The citizens have to understand the country's situation,” Al-Araby Abo Taleb, head of the General Federation of Supply and Internal Trade, a governmental body, told MEE.

“The state asks us to understand its situation. Ok, but how can my kids understand that I cannot feed them?”

In a video that circulated on social media on 11 March, Mohamed Mansour, a general in the Egyptian security services, went as far as encouraging Egyptians to "go hungry" and "sacrifice their dinners," for the sake of Egypt’s prosperity.

This did not convince many Egyptians who are struggling to feed their children, like 36-year-old Hassan Rashad. He said that it is difficult to sympathise with the state when borrowing money on a monthly basis has become an unwanted necessity in order to feed his two boys.

“The state asks us to understand its situation. Ok, but how can my kids understand that I cannot feed them?” he said.

Rashad is an employee in the buffet service of a private company and earns 1600 Egyptian pounds ($100 dollars) a month. He is constantly in debt because of being forced to buy essential food at markets for higher prices, rather than depending on the subsidised food prices.

'They say they grant us subsidies and then they throw us their leftovers'
- Salama Sayed, Plumber

Core inflation has soared above 30 percent since Egypt floated its currency in November, after securing a $12 billion loan package from the International Monetary Fund (IMF) to support a government austerity programme.

Vendors and customers alike have said there are shortages in several subsidised products. Currently, each client holding a ration card cannot buy more than one bag of sugar because of a severe sugar crisis.

“Most of the [subsidised] products are not available especially sugar," said an employee affiliated with the Ministry of Supply, who preferred to remain anonymous because he was not permitted to speak to the media. According to him, people have no choice but to resort to buying more expensive products from local markets.

For 38-year-old plumber Salama Sayed, the whole subsidy system is “illusive” and does not help him provide for his wife and two-year-old daughter.

“They [the government] deceive us. They say they grant us subsidies and then they throw us their leftovers,” he said.

Sayed referred to one of the popular slogans chanted by protesters during the 2011 uprising that toppled Hosni Mubarak, "Bread, freedom and social justice." He added that six years after the revolt, their demands have not yet been met.
'I don't know how we can live'
Safia, a 62-year-old housewife, complained that her late husband’s monthly pension of 900 Egyptian pounds ($50) no longer suffices to feed her and her family.

“I don’t know how we can live. This is hard. So hard and unfair,” she said

Due to their difficult economic situation, Safia’s two children and four grandchildren all live in the same home.

In the meantime, in front of a state-run subsidised food complex, old women are waiting in line to get their share of food.

Mona Hussein, a 60-year-old mother of two, described herself as the “finance minister” of her home and complained about the constant hike in food prices.

Hussein's husband works as a doctor in a private hospital in Cairo and the family depends on his monthly income of 6000 pounds ($375). Though they once considered themselves part of the middle class, as prices continue to increase and wages remain stagnant, most Egyptian families are struggling to get by.

"I'm very upset and angry. We are no longer a middle class,” Hussein said. According to a report released in January, food prices have been going up 38.6 percent annually.

"I think I never buy the same item with the same price twice. Every day there is a change," Hussein said.

"We cannot afford this and I don't know for how long we can bear it." 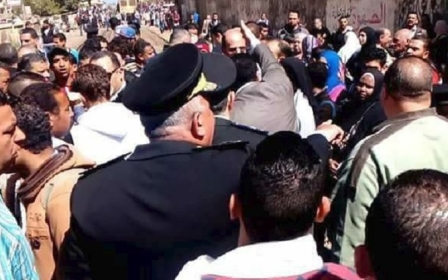