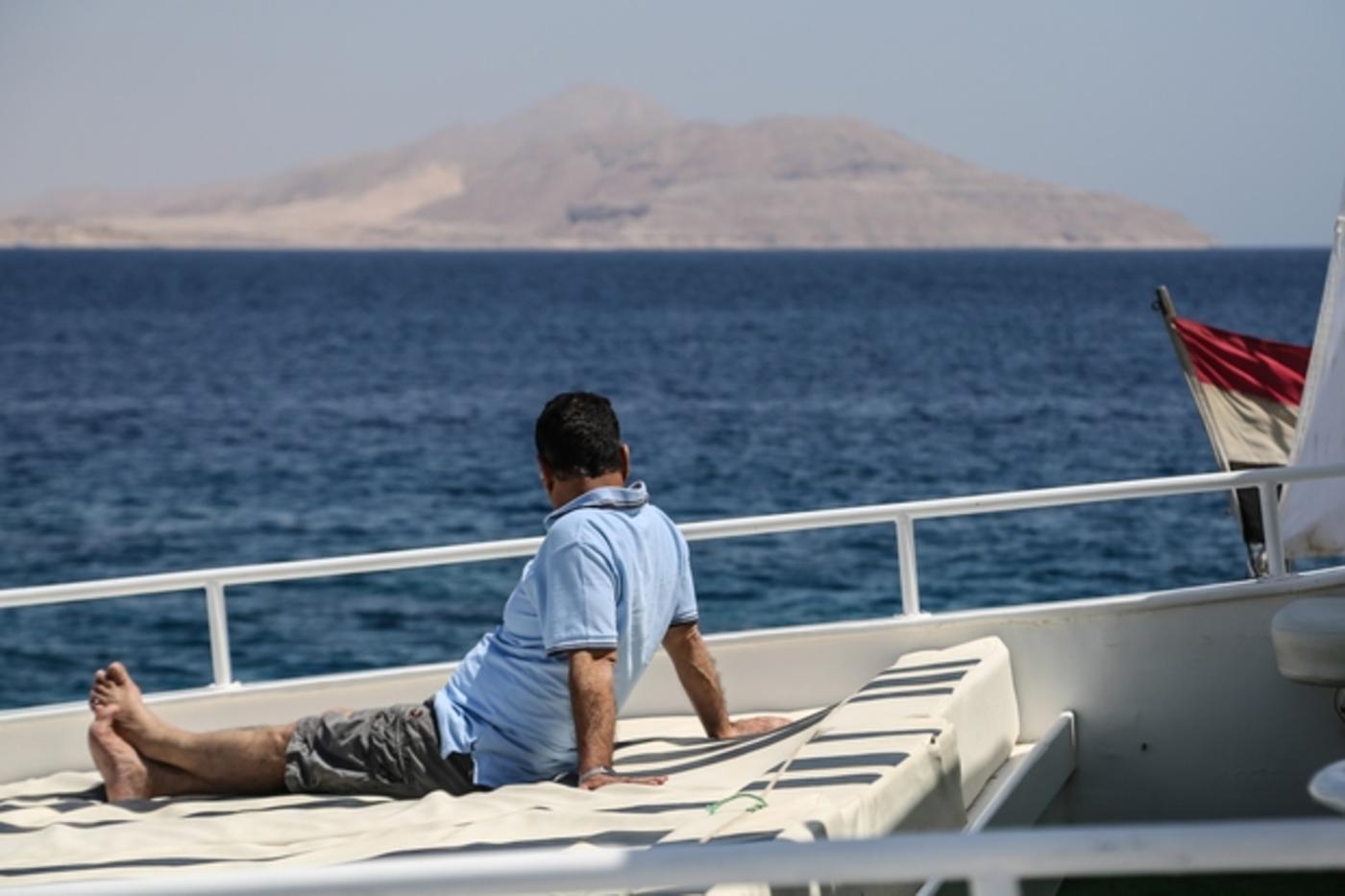 SINAI – Eissa Mohamed, a diving instructor based in Shark Bay in the Egyptian resort of Sharm El-Sheikh, has been taking tourists on underwater excursions to the Red Sea island of Tiran since 1998.

"Ever since I got here, I don’t dive anywhere but Tiran. Ras Mohamed is of course beautiful, but Tiran is Tiran,” he said.

‘People come [to Sharm El-Sheikh] to dive in Tiran’

Tiran is one of two uninhabited islands located in a strategic part of the Red Sea bordered by Israel, Jordan, Egypt and Saudi Arabia. Tiran and Sanafir have been at the centre of a controversial deal to transfer them to Saudi Arabia, which has sparked protests and outrage against Egyptian President Abdel Fattah al-Sisi.

Mohamed and other divers say they have not been able to get close to the island since 16 June, after authroities prevented diving excursions and fishing near the island. The decision came a couple of days after the Egyptian parliament approved the transfer of the islands to Saudi Arabia.

Egyptian naval forces have been guarding the island, telling visitors to stay at least one kilometre away from it.

'Security measures are tight of course [and] we can’t even get close to Tiran, which is very troubling'

“Before we could get close to the island and dive there. It was still prohibited to step on the island, but some would sneak in, rest a bit on the sand or walk for a few metres, but nothing more than that so they didn't get caught,” Mohamed said. “But now, security measures are tight of course [and] we can’t even get close to Tiran, which is very troubling.”

The islands were captured by Israel in the 1967 war before being returned to Egypt under the 1979 Camp David Accords. Egyptian security forces were deployed on the islands along with UN peacekeeping troops, following the 1979 treaty.

Mohamed fears that if more restrictions are implemented on diving in Tiran’s waters, the already deteriorating tourism industry in the Red Sea resorts could plummet by 80 percent. “It will be a disaster, a catastrophe,” he said.

Khaled Ali, former presidential candidate and lawyer who is leading the case against the transfer of the islands, told Middle East Eye that details on the deal with Saudi Arabia, including restrictions and how the maritime border between the two countries will be drawn, have not been disclosed to him or the public.

Prices for both snorkelling and diving excursions in Tiran's waters range from EGP270 ($15) for Egyptian tourists to EGP447 ($25) for foreigners.

According to official statistics, the number of foreign tourists visiting Egypt dropped by around 51 percent in the first half of 2016 in comparison with 2015.

Mohamed explains that Sharm El-Sheikh is famous for two attractions: Tiran, which is very popular among tourists, and the nature reserve of Ras Mohamed. Visitors can enjoy snorkelling and diving in both sights.

According to Mohamed, if tourists are spending five days in Sharm El-Sheikh, they would ask him to take them on excursions to Tiran for four out of five days.

“People come [to Sharm El-Sheikh] to dive in Tiran,” he said.

Tiran’s clear waters offer tourists a wide variety of coral reefs and sea creatures, such as tiger, hammerhead sharks and sea turtles. On a lucky day, they can even catch a school of dolphins skipping through the waves.

Diving instructor Mokhtar Mohamed, who has just emerged from the water, said that Tiran's waters are suitable for all levels of diving. He pointed out that Tiran’s Northern Laguna is ideal for beginners because it is only five or six metres deep.

On 24 June, Sisi ratified the maritime border treaty days after parliament approved the deal, which has been the subject of a confusing legal battle with one court annulling the treaty and another upholding it.

Last year, Sisi's government announced the maritime agreement with Saudi Arabia, an ally that has given billions of dollars of aid to Egypt. The Egyptian and Saudi governments say the islands are Saudi but have been leased to Egypt for protection.

But a 31-year-old tour guide, who preferred not to be named for security reasons, believes that the islands have always been Egyptian and insists on telling tourists that every chance he gets.

“We see Tiran from Sharm El-Sheikh by the naked eye. Saudis can only see it using a telescope from the closest border between us,” he told MEE.

On 25 June, he was with a group of tourists heading towards Tiran island when they were stopped by security forces and ordered to keep a distance of one kilometre away from the island.

The tourists were left frustrated, as they had specifically booked a trip to get close to the island and dive in its pristine waters. "Tourists on the boat complained," he said.

He predicts that his income will go down by 25 percent following the latest restrictions on diving and snorkelling near the islands. Tour guides make an average of $16.50 per day from excursions to Tiran.

He also argues that, with Tiran island out of bounds, the nature reserve of Ras Mohamed in the Sinai will receive double the number of visitors, which could damage its marine life.

A local Bedouin, who preferred to remain anonymous for security reasons, pilots a speedboat from Ras Gamila on the Red Sea to Tiran. He talked about how frustrated he was that locals couldn’t take a strong stance against the decision to hand over the islands.

“If only we [in South Sinai] were united and took a stand against the handing over [of the islands]... but we’re all tribes here,” he said.

He added that local fishermen who used to make a living from catching fish in the waters between Tiran and Sanafir were also affected after the government implemented a ban on fishing in the area.

History of the islands

However, not everyone is in agreement on the islands' rightful owners. During a separate boat ride from Shark Bay to Tiran, Belal Mohamed, a diving instructor who has been working in Sharm El-Sheikh since 2005, explained to tourists that Tiran belongs to Saudi Arabia.

'It [Tiran] represents all the beauty, its spots and reefs, there are no words that can describe how fascinating they are'

“I have taken this piece of information from my own instructors that have been based in Sharm El-Sheikh long before my generation of divers,” he told MEE.

The history of the islands is contested, with Egypt previously claiming the islands and placing military installations on them in 1949. The islands are three miles from the Egyptian coast and four miles from Saudi Arabia.

Ayman Hamza, a diving instructor, said he learned from older instructors that the islands are neither Egyptian or Saudi because citizens are prohibited from stepping foot on them.

“We would just tell the tourists in our general briefing that this is Tiran Island on the border between Egypt and Saudi Arabia,” he said.

Although Belal Mohamed used to spend most of his diving excursions in Tiran for its stunning marine life, he said that the island’s waters can be substituted for other similar diving locations, such as a region called Hadabet Om El-Seed in Sharm El-Sheikh.

“Thus, by that move, we aren’t deprived,” he said. “We still have variety.”

But for other divers, Tiran is Egyptian and its beauty is irreplaceable.

“It represents all the beauty, its spots and reefs, there are no words that can describe how fascinating they are,” said Eissa Mohamed.