“The soldier spilled liquid on my trousers, saying he would ‘burn me alive’ if I didn’t tell him where the tunnel system was” 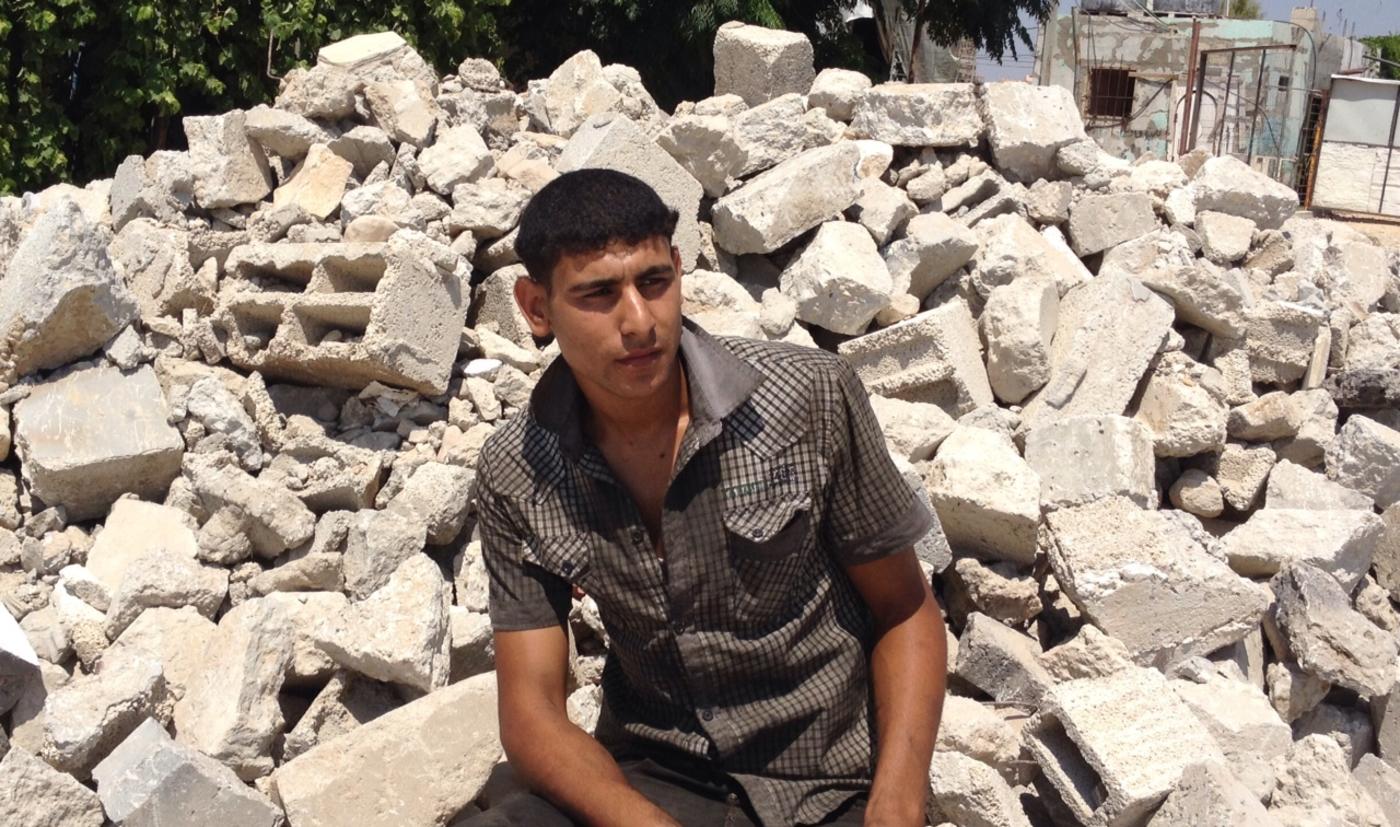 KHUZA’A, Gaza Strip - When an Israeli tank shell hit the outside walls of their home, Sami Al-Najjar was sitting with his sister and brothers, in Khuza’a in wester Khan Yunis.

“The room was filled with thick smoke and we couldn’t breathe, so we ran outside,” said Najjar, as he began to recall that dark day back in July.

As the family tried to flee the building, Najjar’s father found a piece of white cloth. He fashioned it into a makeshift flag and began waving it above his head to signal the Israeli soldiers and let them know that there were civilians inside and that his family was about to start streaming out behind him and away from the smoke.

But despite his father's efforts, Israeli soldiers outside ordered the men and women to separate and then began binding the men’s hands.

As soon as they were tied, the soldiers started interrogating the men, and began demanding to know where the tunnels (used by resistance fighters) were. Najjar insisted that he did not know, but the soldiers did not believe him.

Next, one of the soldiers “picked up a chair and slammed it into my back,” said 21-year-old Najjar.

He could see his mother and the rest of his family watching him from the house as he was then taken into the backyard alone and told to kneel as a military dog - wearing a metal muzzle and what looked like a camera on its back - approached.

“I didn’t know what would happen next,” Najjar said.

“Then one of the three soldiers stood an empty water bottle on my head and aimed his gun at it,” Najjar added, before pausing to take a deep breath and calm his nerves.

“The first bullet broke the bottle but then one of the soldiers - who was about my age and was short and stocky, with a shaved head, black combat boots and narrow, almost Asian looking eyes - held up an M-16 automatic weapon.

“He stood over me as I knelt on the ground.”

To the other side of Najjar stood another soldier who wore a mask, and conveyed the orders from the rest of the soldiers to the prisoners in perfect Arabic.

After the bullet shattered the bottle, Najjar’s hearing was impaired for a while. He couldn’t hear what one soldier was saying, but recalls that he heard the Asian-looking soldier scream: “We will show you how you’re going to tell us where Hamas rockets are fired from, and give us two names of Hamas leaders.”

Najjar replied: “I don’t spend much time in Khuza’a; I fix tire-punctures in my workshop, that’s all.”

The soldier then grabbed Najjar by his shirt, pulled him to his feet, and slapped his across the face.

“You’re a liar,” the soldier screamed as he began beating Najjar with a chair, which he raised again and again until it finally broke.

Najjar says that after this, the soldiers pulled him up from the ground and the Arabic-speaking solider removed his mask and began ordering him to reveal tunnel locations.

“Tell me where the tunnels are,” he screamed as he waved his gun at Najjar’s neighbours.

Najjar was terrified and in pain, but the worst was yet to come.

“Suddenly bullets were fired at the soldiers from somewhere,” Najjar said. “The soldier who had hold of me made me walk in front of him.”

As the exchange of fire continued, Najjar claims that he was hoisted up and forced to jump onto the deck of the tank.

“There was random shooting, and the soldiers used me as a human shield,” Najjar said.

“When it got quiet, the masked soldier spilled liquid on my trousers saying he would ‘burn me alive’ if I didn’t tell him where the tunnel system was, or give him the names of two Hamas members.”

The last thing that Najjar saw before the Arabic-speaking soldier blind-folded him and told him to undress, was his mother and sisters being led out of the house.

“I didn’t know how much to take off, but when I got to my underwear, the soldier told me to stop,” he said. He was later taken to an unknown location, along with a few dozen other young men.

Najjar’s testimonial is just one of many collected from young men in Khuza’a that day, all of whom have similar stories to tell.

Najjar’s cousin, Fouad Al- Najjar, 24, also said he was taken and used as a human shield.

Like Najjar, he was taken away by soldiers. Initially they kept telling Fouad Najjar that he would be fine and not to worry, but when he didn’t answer their questions and insisted that he didn’t know the location of Hama’s tunnels, he too was struck in the face several times by the very solider who had first told him not to worry.

“He pinned me down on the ground with his combat boots, forcing my neck into the dirt,” said Fouad Najjar, who recalled hearing the sound of tanks thundering nearby.

Fouad Najjar then said that he was taken to join a line of other young men who were also being used as shields.

“Each time an Israeli F16 hit, an Israeli soldier behind my back - who had dark skin and a light beard and who the other soldiers kept calling ‘Rami’ - would tell me to be quiet,” he said, while explaining that the Israeli soldiers seemed scared and were trying not to draw attention to themselves.

The issue of human shields is a complex one. While Israel blames Hamas for using civilians as human shields to try and ward off attacks – an allegation that Hamas consistently denies - worrying testimonials recalling Israel’s use and abuse of the practice in both Gaza and the West Bank have appeared consistently through the years.

The practice is considered a breach of the Geneva Convention and Israeli courts outlawed this tactic in 2005, although the Israeli army has long contested the decision.

The end result is that even in the very few instances when misconduct is occasionally prosecuted – such as an incident in 2009 where a nine-year-old boy in Gaza was made to check a bag for explosives - the punishment is mild and the army insists that these are acts committed by individual soldiers in difficult situations which are not army policy.

Once Sami Najjar was blindfolded and stripped at his home, he said that the three soldiers threatened him and forced him to walk ahead of them. He was barefoot as the summer sun shone down on boiling hot ground underneath.

Najjar estimates that they walked for about 90 minutes before they eventually reached a military detention camp on the Israeli side of the Gaza-Israel border.

Apart from the drum of soldiers, “I could hear the voices of my cousins, Momen and Issa,” Najjar said. “I felt relief that I wasn’t alone.”

The relief didn’t last long; Najjar remembers being kept blindfolded in a cage outside, where the sound of rockets burnt his ears and he could hear Israeli soldiers periodically dashing to safety in the camp’s shelter.

On the second day, Najjar said he was taken into an interrogation room with a soldier he could not see. Once again the solider kept on yelling, demanding that Najjar give up the names of three Hamas members.

“He put his fingers on my throat, and when I said I didn’t know anything, he shouted ‘You are liar.’ I then collapsed to my knees.”

When he fell, the soldier picked him back up shouting: “Stand up! You’re lying to me.”

The soldier next told Najjar that he was treating him in this way because “because you are a human,” and are designed to feel humiliation, fear and shame.

After the interrogation, which lasted for a few hours, Najjar says he was told to remove his underwear and put on a white prison outfit.

He would occasionally be given water and food but complains that he was kept in a cell where sewage water was spilling onto the floor.

“I could smell the dirt and the mud underneath me,” he said.

On the fourth day, Najjar had his name called and was told to get on a bus. He didn’t know where he was going but before too long him, and several dozen other men, were thrown off the bus at the Gaza border. Najjar looked around for his cousins but he couldn’t see Momen and Issa. They were not among those released with him.

It has taken Najjar almost two months to be able to recall his ordeal. Even as he does he shakes and his voice crumbles as he explains that he heard his cousin Momen screaming in the camp, but has not seen him since and does not know what happened to him.

"The moment the Israeli soldiers removed the sheets from our eyes, we were about 50 to 55, all of us had been used as human shields on the border of Gaza," said Najjar.

"The moment there is a Palestinian rocket flies over, soldiers use us as human shields to avoid the resistance’s gunfire." Gaza Aftermath
Children return to schools in Gaza after war