Is a mass wedding in Gaza part of a UAE-Dahlan arranged marriage?

The wife of Mohammed Dahlan, a former Palestinian leader expelled by Fatah, returns to Gaza to arrange a UAE-funded mass wedding 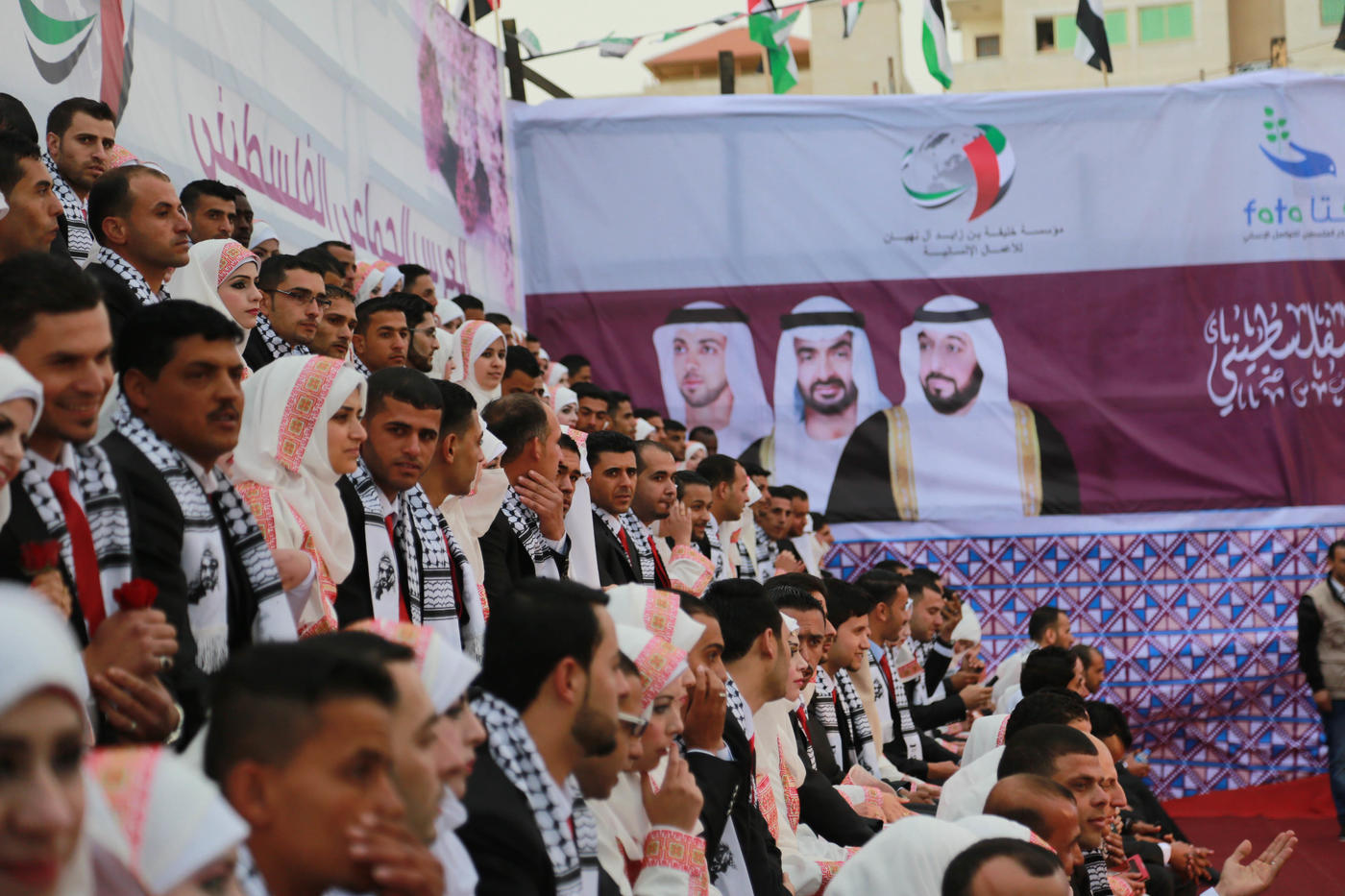 GAZA CITY - It is a new day in Gaza. People awake and walk out to the streets where they see massive billboard photos of the president of the United Arab Emirates (UAE), Sheikh Khalifa Bin Zayed al-Nahyan, the governor of Abu Dhabi, Sheikh Mohammed Bin Rashid al-Nahyan, and the head of Emirate Red Cross and deputy head of the supreme armed forces, Hamdan Bin Zayed al-Nahyan. The posters read: “Thank you, Emirates … Gaza has an appointment for joy.” The billboards show appreciation to the UAE for funding a mass wedding in Gaza last week.

The wedding - in which some 400 Palestinian men and women got married with the financial support of the UAE - took place on 11 April in Gaza City. Such weddings happen on occasion in Palestine - where a donor provides funds for couples in financial need. Typically, thousands of couples are registered for mass weddings in Gaza, waiting for new funding to come through and to be chosen by Palestinian political leaders.

The new billboards commemorating the UAE's contribution are similar to those posted in October 2012 by Hamas, when the Palestinian movement thanked Qatar's Emir for what it considered generous support for Gaza's infrastructure. They also look similar to posters put up to commend the 36-year anniversary of Iran’s Islamic Revolution, adorned with pictures of Al-Aqsa Mosque and Palestinian, Iranian and Hezbollah flags. But this time around, the billboards thanking the UAE were printed by the wife of Mohammed Dahlan, a former Fatah leader who was expelled from Palestine after being charged with corruption and murder and after his relationship with President Mahmoud Abbas deteriorated.

Dahlan and his family left Gaza in 2007, when Hamas took control of Gaza Strip, following a military confrontation with its rival, Fatah. Ever since then, Dahlan has not returned to Gaza, but his wife has visited to arrange for the UAE-funded mass wedding.

The aim of the wedding, according to Dahlan’s wife Jalila, is to support 400 young Palestinian women and men who are relatives of those killed or injured by Israel, or relatives of prisoners being held in Israeli jails.

Fata, an NGO that coordinated the events, said that the wedding project aims to support young men and women living in extreme poverty who are unable to afford their own marriage ceremonies. “We are trying to achieve familial stability for them,” the NGO said.

Gaza is a densely populated area - 1.9 million people are crammed into 360 square kilometers. According to the Palestinian Bureau of Statistics, 42.8 percent of employable Palestinians in the Strip are out of work, with unemployment figures at around 194,000 people.

The plans for the mass wedding have brought much joy to Gaza’s population, but also many questions about Dahlan's involvement in UAE’s support for the event and at what price it comes politically.

Gaza’s political analysts question the timing of the Gulf state’s funding. Adnan Abu Amer, a dean at al-Ummah University for Open Education, said that Gaza has become a place for Arab states to attempt to wield influence.

“It seems Gaza is becoming a place for regional powers to show off,” said Abu Amer. He said that dropping money here and there is meant to influence the political map where people are most desperate. “Nonetheless, Palestinians will accept all forms of aid.”

Hamas - which does not enjoy a warm relationship with Dahlan - does not seem to find these moves problematic. Hamas leaders allowed the wedding event to happen, as long as they were able to nominate, together with other factions, some of the couples who were to get married.

Ahmed Yousef, a prominent Hamas leader and political advisor to former prime minister Ismail Haniyeh, said that his movement has always been open to those who want to help Gaza.

“We are always open for whoever wants to come and deliver aid to the population of Gaza - people are living a grim reality and we appreciate any efforts which can bring people out of the catastrophic situations they are living in,” Yousef said.

Economic desperation among young people has reached an unbearable level. The youth have many questions about the presence of Dahlan’s family in Gaza.

The involvement of Jalila Dahlan in the UAE-funded mass wedding has created controversy. Some speculate that her aim is to “buy support” for her husband, who serves as advisor to Mohammed Bin Zayed al-Nahyan of Abu Dhabi.

Several Gazans told Middle East Eye that Dahlan is now donating foreign money to victims of Israel’s recent war on Gaza by giving a few hundred dollars to each victim - in order to gain support and sympathy from the people.

“It is meant to buy popular influence and make the people feel that the Emirates offers better than that offered by Hamas and the Palestinian Authority [PA],” Abu Amer said.

Meanwhile, a senior Hamas leader, speaking on the condition of anonymity, told MEE that the aim of Emirati support is to weaken the infrastructure of the Islamist movement and present it as a dysfunctional entity.

Dahlan’s relationship with the head of the PA, Mahmoud Abbas, has recently taken a new dark turn, with both naming and shaming each other in several media appearances. Abbas accuses Dahlan of “collaborating with Israel”, while Dahlan says Abbas was behind the assassination of late President Arafat. Dahlan has denied all accusations, accusing Abbas of “implementing Israeli and American agendas”.

Lack of evidence for the claims creates confusion among Palestinians in both Gaza Strip and West Bank.

Dahlan, originally from Khan Younis in the southern Gaza Strip, used to be the PA’s strongman in Gaza, with ties to Israeli security. He began his career as chief of preventive security in Gaza. This post involved direct security coordination with Israel, which crushed Hamas in the early 1990s when the movement was still in the establishment phase.

In Ramallah last year, Dahlan was charged with corruption and abusing funds. Dahlan has denied the charges on several occasions. Also, last month, in light of the corruption charges, a Ramallah-based court looked into the possibility of taking away priveleges Dahlan has as an elected member of the Palestinian Legislative council.

“There is no alliance between Dahlan and Hamas," Abu Marzouq said. "The only alliance is with President Abbas through the signed agreements to implement [Palestinian] reconciliation.”

A young man who was injured in Israel's most recent Gaza offensive, who received a few hundred dollars from the UAE, says that he likes Dahlan, though he never thinks he could vote for him again. In Gaza, people believe Dahlan is receiving support from the Emirates in order to get him back into power after President Abbas leaves.

“The ultimate desire of the UAE is to empower Dahlan in order to finish off Hamas and the Islamists in Gaza,” said the young man, who did not wish to be identified.

Journalist Ashraf Abu Ikhsiwan approves the wedding move as a good one. “This is humanitarian work, and let us take it out of the political perspective.”

“This is natural work for any Palestinian in the diaspora who is able to help Palestinians - regardless of their political affiliation ... with other political actors. I hope Abu Mazen [President Abbas] will do the same,” said Abu Ikhsiwan.

For a wedding gift, each couple received 3,000 Jordanian dinars (around $4,200), with the UAE also covering the expenses of the mass wedding.

Abu Amer says this form of aid represents the political interest of the UAE, which wants to get a foot inside Gaza via humanitarian aid.

“This is of mutual interest to both sides,” said Dr. Abu Amer, indicating that both the UAE and the 400 newlyweds benefit from this move.

Earlier, in January, thousands of Palestinians took to Gaza’s streets in support of Dahlan, but Abbas sacked a few hundred Dahlan loyalists who were on the payroll of the PA. The crowds believe that Dahlan will try to return, backed by UAE support.

“Dahlan is not denying his wish to return to Gaza, but his return will very much be linked to a new image, as saviour of the current crisis in Gaza,” said Abu Amer. 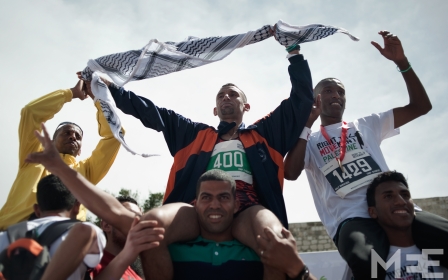