Meet the Banksy of Syria

As the Syrian Army takes control of Daraya, the work of a mysterious graffiti artist stands as testament to the rebels' spirit 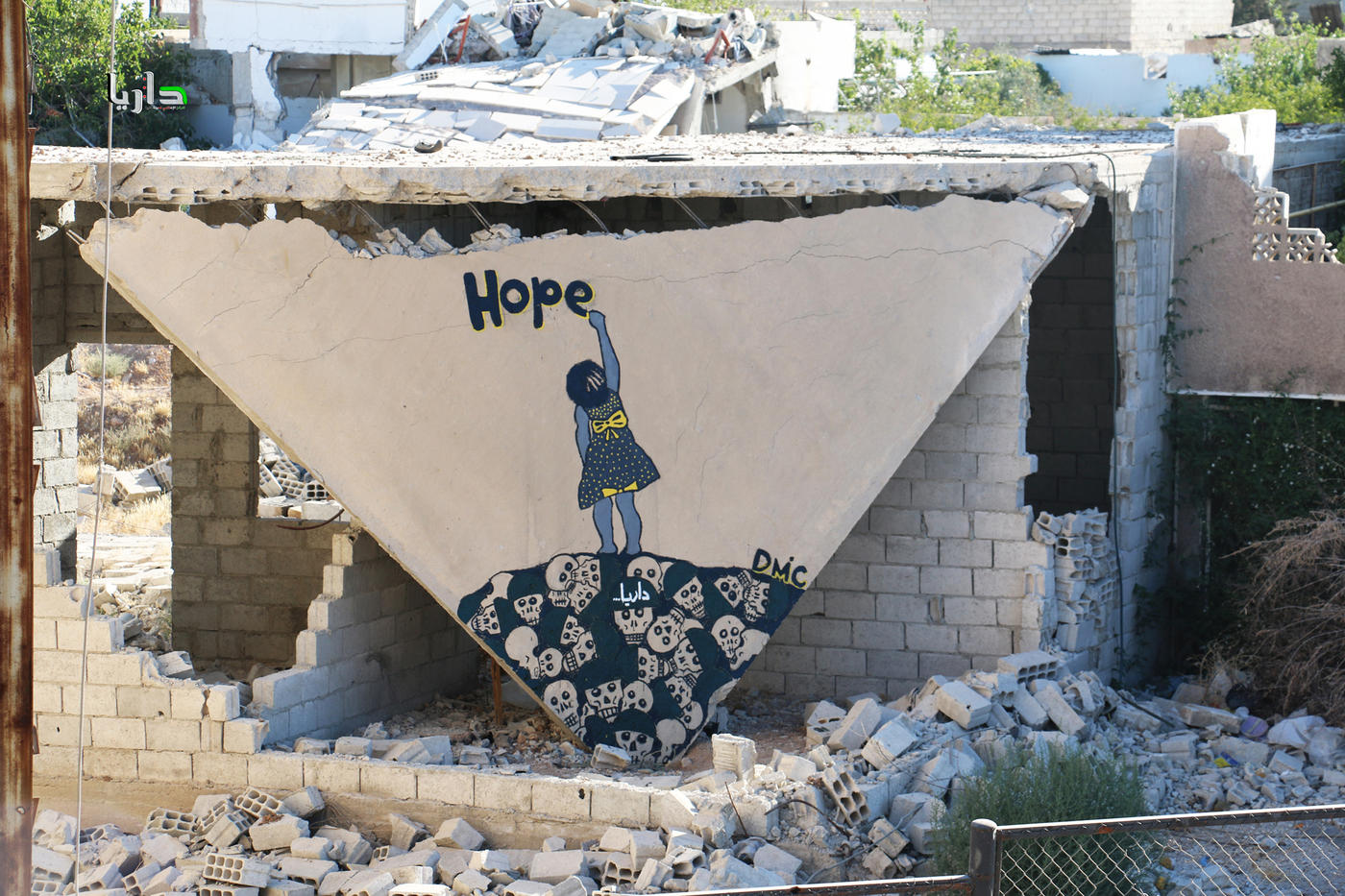 DARAYA, Syria - Leaning into a slab of roof hanging precariously over one of Daraya’s many shattered streets, Abu Malek al-Shami worked furiously through the night. He strained his eyes against the shadows: the full moon was just bright enough to illuminate the tip of his brush, while just dark enough to obscure his skinny figure from the snipers training their gaze on the streets behind him.

As the early morning light crept across the bombed-out skyline, people woke to the sight of a new piece of street art overlooking the promenade. They excitedly gathered around it, whispering and laughing, amused by the depiction of a massive rifle aiming at a camera, a red “VS” hanging between them. The mysterious street artist had come and gone with the night.

Over the past three years, Shami’s canvas has been the besieged rebel city of Daraya. Splashed across the fields of destruction, a cityscape laid waste by four years of relentless bombing, are 32 of his murals. They crop up randomly, like wildflowers, adorning the ruins of what once were homes, schools and hospitals.

But with the Syrian Army assuming control of the battered enclave, the fate of the work that has helped inspire the city’s remarkable four-year-old resistance is now in question. As one of about 1,000 rebel fighters who will be transported to Idlib, Shami faces an equally uncertain future.

Despite the public profile of his revolutionary murals, the 22-year-old’s true identity has remained a mystery - even to most of this close-knit community of rebels and activists. Shami is the pseudonym he uses to protect those friends and family who are living under government control. He has taken to signing his paintings with the simple, collective “Daraya”.

“I was initially doing this work in secret,” he explains. “But people loved it when the work started appearing around town. They really encouraged me and began giving me suggestions on where and what to paint. One man asked if I could draw something on the wall of his destroyed house, but a few days later a barrel bomb fell and crushed the remainder of it.”

It was back in January 2013 that Shami left his home and struck out from the city towards the sounds of shelling that had rolled like thunder over the hills from Daraya since the FSA took up positions there a few months earlier. As part of a large family of political activists, Shami had begun marching in demonstrations in Damascus two years earlier, while still a high school student. But the government’s continuously heavy-handed and bloody response towards the civilian demonstrators convinced him that protests alone were not enough to prevail and he left to seek training with the FSA.

In his backpack, he carried a change of clothes, a book of Arabic poetry, the Quran, a copy of Victor Hugo’s revolutionary epic Les Miserables, his sketchbook and some pencils. While he lacked a formal artistic background, he had been outlining graffiti and simple illustrations to support the democratic goals professed by the uprising. “When I arrived, the fighters initially laughed at my sketchbook and asked me, ‘What are you planning to do with that?’ At the time, I just thought it would keep me sane.”

After six months, Shami began quietly sketching on the walls in the areas he was patrolling for the FSA. These anonymous works soon captured the imagination of the locals, who were inspired by the art’s defiant spirit - an entertaining distraction from their lives under siege. Members of the Local Council of Daraya were swift to recognise the value of Shami’s murals and encouraged him. One member in particular, Majd el-Maaddamani, began to photograph the work and post it on the council’s Facebook page.

The murals span a range of political topics, invoking the hopes, fears, and dark humour born of years living under siege. Strategically angled so as to be seen from both “above and below”, the work is directed at the people of Daraya but also the world beyond its walls. Motivated by a deep commitment to the principles of democratic governance and pluralism that launched the Syrian uprising of March 2011, his work has stood as evidence of Daraya’s resistance while also being a cry for help.

In the light of the rebel defeat in this Damascus suburb, his message to the Syrian opposition has taken on a more urgent and dire dimension.

“There was a danger of people forgetting,” says Shami. “Forgetting about the struggle and forgetting the values that brought us here. There was a need to remind people exactly what they were fighting for, what this revolution meant.”

The “Hope” mural of August 2014 was the first of his works to reach an audience outside of Daraya. That image portrayed a young girl standing over a mound of helmet-clad skulls: a promise of future beauty that shines through the pain of the present. The photos soon beamed over television channels and streamed through Facebook feeds across the Arab world, launching Shami to newfound stardom among a community of rebels in need of encouragement.

Some pieces poke a finger in the eye of Bashar al-Assad, casting him and his advisors as Pinky and the Brain, the mismatched, genetically enhanced lab mice from the American television series, futilely plotting ways to breach the walls of the rebelling enclave during the four-year siege. Other murals, on the sides of ravaged homes and schools, poignantly depict the lives that used to be lived there before the conflict.

Shami had no shortfall of suitable canvases. UN staff visiting Daraya in April estimated that approximately 80-90 percent of the city’s infrastructure had been destroyed by a combination of prolonged artillery fire, barrel bombs, and the tsunami of Russian shelling that began with the military intervention last September.

It is not hard to see why the government prioritised breaking the resistance here. Until last week, Daraya stood alone as the last secular rebel stronghold in Syria, which residents and fighters proudly declared free of militants. With its democratic culture of local councils, communal farming arrangements, and fierce, grassroots resistance movements, the suburb was romantically called the “Idol of the Revolution” by opposition supporters.

The Assad government, however, has ruthlessly pursued a strategy of eliminating credible rivals that could join it at a future negotiating table, reducing the war to a brutal choice between dictatorship and bloodthirsty militants. Daraya was as a lingering obstacle to that goal, clinging on in a state of a crushing siege since early 2014.

With all access to the outside world cut off, supplies of food, medicine, and other essentials dipped to perilously low levels. The siege also limited the materials available to Shami, forcing him to unearth what he could from the crushed avenues of abandoned shops.

“There was a big store of paint, but the owner was out of Daraya,” he says. “I called and took his permission to use his paint. After two years of constant work, I have run through virtually everything in the storehouse.”

He counts on his fingers the colours that he had been reduced to working with: “Red, a little bit of black, pistachio green, shiny yellow, and brown. I now have to create murals that fit these colours.”

But in recent months, the Syrian government, backed by the firepower of Russian air support, seized the vast majority of farmland around Daraya that was critical to staving off mass starvation during the siege. Surrender followed.

Now, in the wake of the ultimate defeat of the rebellion in Daraya, the future of its fighters and inhabitants is hard to predict. Shami and his fellow rebels have begun the hard task of disengaging and making the long journey to Idlib.

However, their struggle to spread the values of freedom and democracy has been immortalised in Daraya’s remarkable four-year-old resistance. Shami hopes his murals can educate Syrians about what they are capable of and will stand as a testament to the self-determination that initially inspired Shami to leave his home for a life of struggle.

“When we started this uprising, it was for freedom and dignity,” he says. “We never wanted a fight. The need to carry a weapon was thrust upon us by the regime. I want to show that there are many like us left in Syria, whose goals are pure and who continue to fight for those same values the uprising started with.” 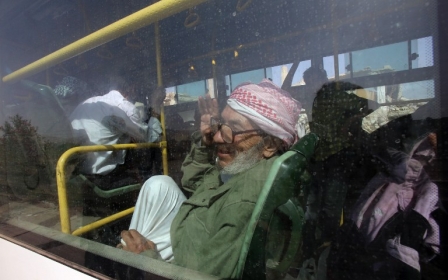