Meet Cairo’s mesaharati: The spirit of Ramadan beats to a woman’s drums

Inspired by her brother, Dalal Abdel Kader became a mesaharati, a Ramadan tradition she is keeping alive in a male-dominated practice 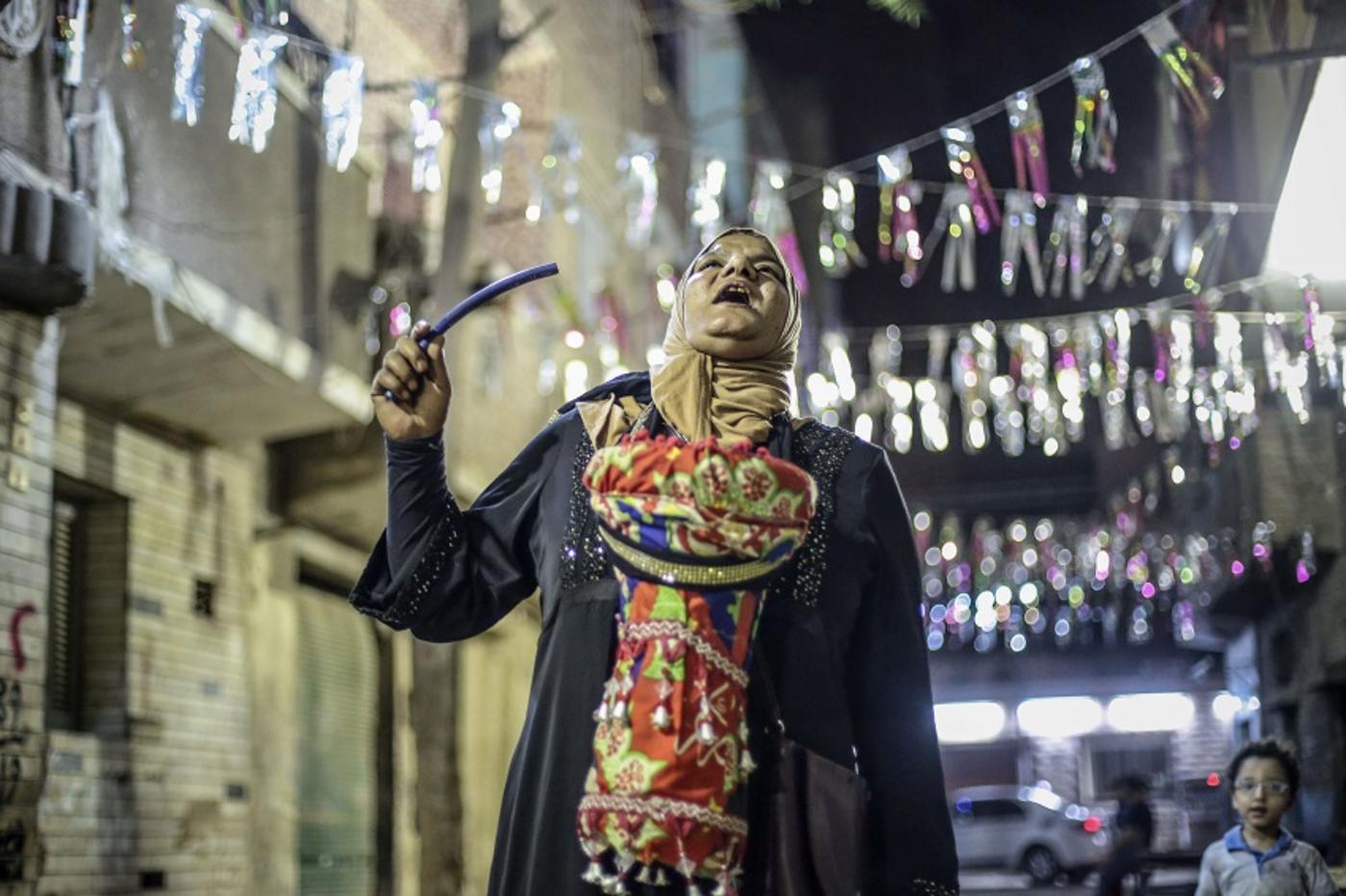 Dalal Abdel Kader first began working as a mesaharati in 2011, when her brother Ahmed passed away (MEE/Mohamed El Raai)
By
Jihad Abaza

CAIRO - The beats of Dalal Abdel Kader’s traditional tabla drums echo through the alleys of the working-class eastern Cairo neighbourhood of Hadayek al-Maadi. Her dynamic voice resonates loudly as a group of kids run towards her, asking her to call out their names.

The 46-year-old mother of four – and soon to be grandmother – is a mesaharati, a volunteer who wakes up neighbouring Muslims, so they can eat the final meal before starting the daily fast during the Islamic holy month of Ramadan.

She roams the streets adorned with bright, glittering Ramadan decorations and lanterns hanging between the balconies. With her drums in hand, she sings, chants, and in the process keeps a diminishing age-old tradition alive.

In a time of alarm clocks, the ancient custom is dwindling in the capital Cairo, and even rarer is the sight of a woman mesaharati in a practice largely dominated by men.

Abdel Kader said that her belief in what she does and the excitement and smiles of the children she meets motivate her to continue.

“You can easily wake up to an alarm clock, but it is not the same as the mesaharati. The mesaharati reminds you that it's Ramadan and people love this," she told Middle East Eye.

‘A visit from Ramadan’

A familiar face in the neighbourhood she grew up in, Abdel Kader said that walking around its busy alleys until after dawn is never a risk, during or after Ramadan.

She receives greetings on every corner. “You’re beautiful,” one woman yells as Abdel Kader walks by smiling and drumming.

This is how I feel all year round, like I am a prisoner waiting for a visit from Ramadan

“You know how a prisoner feels when he gets a visit?” she asked rhetorically. “He is happy... and he lives off that memory until the next visit. This is how I feel all year round, like I am a prisoner waiting for a visit from Ramadan.”

Abdel Kader first began working as a mesaharati in 2011, when her brother Ahmed passed away. She walks the same routes each Ramadan, starting at 12am and finishing at dawn.

Keeping it in the family

Abdel Kader’s Ramadan practice follows in the footsteps of her father and older brother, whom she lost over the course of her life because of health problems. Abdel Kader was one of five siblings, but now she only has one sister left. In many ways, the work she does as a mesaharati is for them.

A photo of a younger Abdel Kader with her arms around her brother stands on the table in the middle of her modest apartment, which is located on the last floor of a seven-storey building in Hadayek al-Maadi.

“I have to keep the photo in front of me all the time,” an emotional and nostalgic Abdel Kader said, as she recounted her family’s story.

You can easily wake up to an alarm clock, but it is not the same as the mesaharati. The mesaharati reminds you that its Ramadan and people love this

“They tell me that my father would enter the street clutching his cane. He’d hold up the cane to knock on each door, calling the residents by name to wake up for suhoor,” she told MEE, as she held up the wooden cane to demonstrate, knocking on the walls of her home.

For Ahmed, whose two legs were amputated when he fell from an open door of a moving train in his early 20s, this was not an easy task.

“My brother Ahmed had a deep, beautiful voice that he inherited from our father, and he gradually gained popularity for how well he sang,” she said. “People would soon start requesting that he sing at local weddings.”

One day, a friend suggested that Ahmed consider working as a mesaharati. “You like folklore, so why not?” his friend told him, according to Abdel Kader.

That following Ramadan, a then 27-year-old Ahmed decorated his handcycle with small lights, carried his drums, and dressed up in his finest clothes.

“What’s this, Ahmed?” Abdel Kader remembers her family asking him. “Are you a groom?”

“Yes I am,” he answered them. “I am a mesaharati. I have to look good so that people are happy when they see me.”

Abdel Kader was 17 when she first asked her brother to take her with him. “He gave me a lantern to hold and we sang together as we walked,” she said. “Together our voices would resonate through the buildings.”

In 2011, a month before Ramadan, Ahmed passed away due to hydrocephalus (an accumulation of cerebrospinal fluid within the brain).

I am proud of her and I make sure everyone knows, I’m the daughter of a mesaharati

“Ramadan that year felt dark.” But a year after that, Abdel Kader found herself drawn to Ahmed’s drums. “I felt as though he was talking to me... as though he was asking me if I can do this... this needs love, I felt him telling me, you need to treat people respectfully.”

When residents heard her on that night, they were ecstatic. “They told me: ‘We thought you were Ahmed... you sound like him,’ and they asked me to continue.”

The ritual came naturally to Abdel Kader. Since then, she has not put down her drums. “I was happy to remind them of him. I want to keep his memory alive through me.”

Despite how easy Abdel Kader makes it look, for her being a mesaharati is almost as physically draining as it is spiritually fulfilling.

Abdel Kader’s 21-year-old daughter Shaimaa told MEE that she often feels bad for her mother. “She gets really tired. I pray for her. I tell her, 'Mama, you need to rest.' But she doesn’t stop.”

After a long night doing her routine, Abdel Kader still has to wake up early the next morning to go to a small ironing shop where she and her husband work. By the time she comes home, she prepares food for her family to break their fast at sunset, and rests for a short while before she’s out again for the night.

Shaimaa and her 20-year-old brother Mahmoud try to do what they can to help. While Shaimaa makes sure she helps with household chores and preparing herbs such as anise and tea to warm up her mother’s voice, Mahmoud sometimes accompanies his mother on her rounds, to carry the drums in case she gets tired.

“She encounters both uplifting and unpleasant experiences,” Shaimaa said, “but she doesn’t like to tell us the bad ones... she gets really sensitive.”

One morning, Abdel Kader came home upset and Mahmoud told Shaimaa it was because one man had yelled at her. “He asked her why she was calling for suhoor so early and told her to leave.”

Putting a smile on their faces

Abdel Kader says that she has not encountered any harassment or particularly negative comments for being a woman doing work traditionally done by men, but either way, it rolls off her back.

“People can say what they want to say. I am doing this for God.”

I want to keep [my brother Ahmed's] memory alive through me

With the money she takes as tips, which can earn her up to around EGP 100 ($5.60) a day, Abdel Kader supports the nine nieces and nephews her brothers have left behind.

“There are days when I am overcome by sadness, sometimes I’ll stand in a street and I’ll remember years ago, when Ahmed and I would stand in the same spot together and sing together... and it makes me want to cry.

“It is overwhelming, but I make sure people don't see me upset. I make sure I always have a smile on my face, and if I see people frowning, I make sure they’re smiling by the time I leave the street.”

Both Mahmoud and Shaimaa say they can see themselves continuing in their mother’s line of work. “I went with her once or twice. She told me to wear a niqab (a full-face veil) because she thought I would be embarrassed,” Shaimaa said.

“But I’m not, I am proud of her, and I make sure everyone knows that I’m the daughter of a mesaharati.” Yemen War
Ramadan in a time of cholera: How Yemen is marking holy month