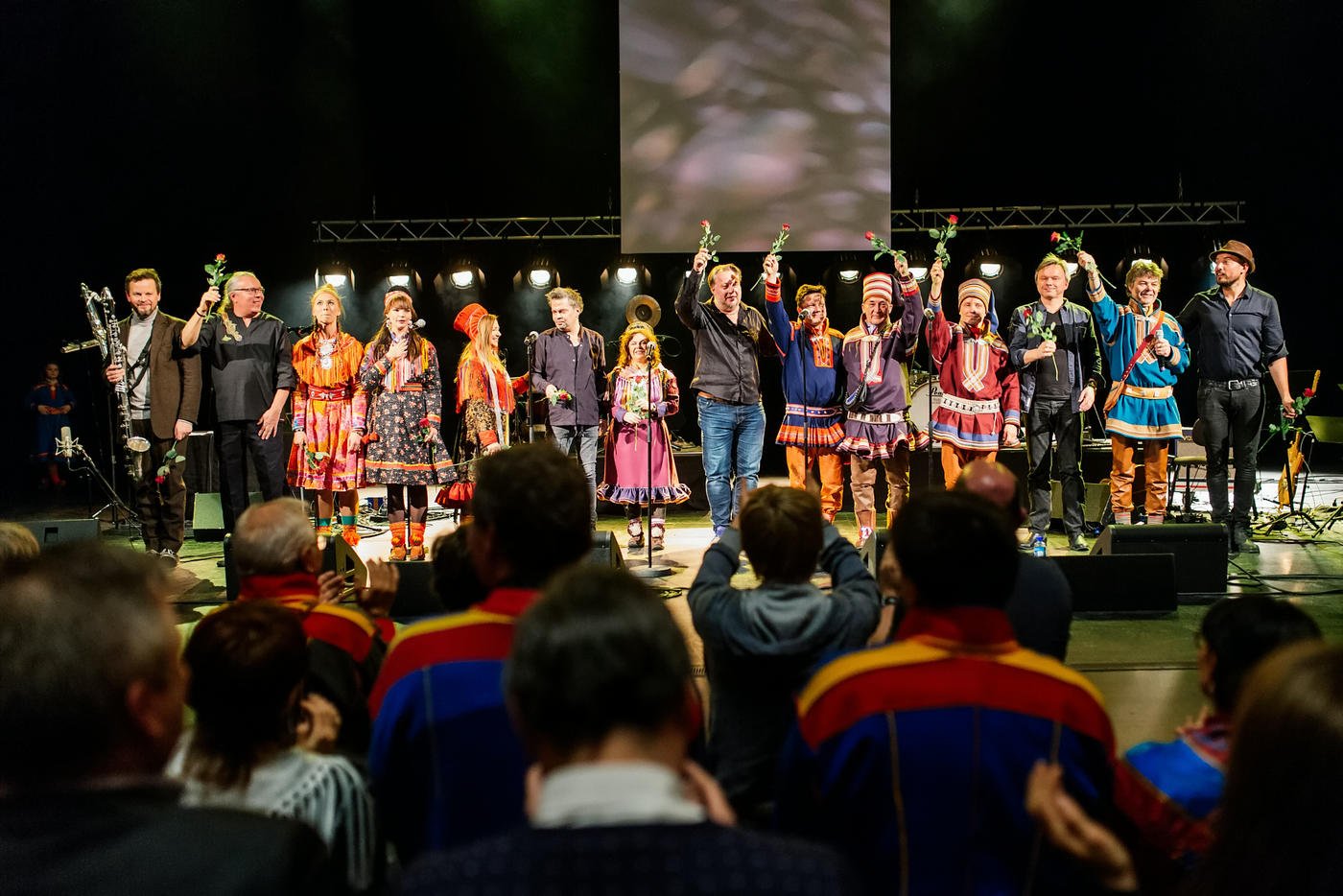 OSLO - Oslo was the place to be in the first week of November, that is if you were willing to brave temperatures plummeting to -4C with the first snowfall of winter - and if you are a fan of eclectic world music.

The Oslo World Music Festival celebrated its latest instalment of festivities from across the globe in the space of six days with acts from Norway, Portugal, Cuba, Iran and the Middle East.

The theme of this year’s festival was censorship and forbidden songs, a topical theme in the music scene, with bands such as Russia's Pussy Riot and UK singer M.I.A. continuing to rub the establishment the wrong way - and the always present trend in the music industry of producing a steady stream of songs championing rebellion, disrupting and even, occasionally, threatening the status quo.

As far as Middle Eastern and North African acts are concerned, there was a strong presence this year with no less than seven performers from the region. The heavyweights - if you want to call them that - were Lebanon’s Mashrou Leila and Syria’s Omar Souleyman.

Mashrou Leila composer and keyboard player Firas Abou Fakher told Middle East Eye how delighted he was at the attention the band was getting in Oslo, with posters of lead singer Hamed Sinno’s face plastered on lampposts and street signs across the city.

“I have to say that it's a beautiful poster and the artwork is really cool. But we see enough of Hamed in real life as it is!” Fakher joked.

He went on to say that “it’s all a bit overwhelming seeing ourselves as the faces of this festival, but we are really honoured. We have never been to Oslo before and this year's theme of 'forbidden songs and censorship' is a very interesting one too. It sparked a fascinating debate amongst ourselves on what censorship actually is. It's such a broad topic and censorship can vary across the spectrum, from the very subtle forms to the explicit, violent types of censorship as well.”

Oslo clearly has an appetite for world music, with a diverse population including large minorities coming from East Africa and the Middle East in a city of only 650,000.

Amid political discussions about forbidden songs and their impact on power, the singers at the festival embraced the occasion. Tunisian singer-songwriter Emel Malhouthi sang about the revolution that took place in 2011, which sparked a ripple effect across the region whose reverberations are still being felt today.

At the Victoria Nasjonal Jazzscene venue, Noura Mint Seymani played her brand of traditional Mauritanian folk music alongside her backing band. Despite the tables and seats down in front, very few people were occupying them as Seymani’s critically acclaimed work from her latest album, Arbina, got people swaying and dancing.

Singing in Mauritanian Arabic, Seymani's vocal range is something to admire. Backed by the hypnotic strum and powerful reverb of an accompanying guitar, the performance prompted an enthusiastic encore.

Fans of Omar Souleyman were in for a treat too. After the crowd was warmed up by a few acts including a DJ set of Electro Shaabi, Dabke and Arabic pop songs, Omar Souleyman made his appearance.

Souleyman, who is from Hasakah, north-eastern Syria - but is now based in Istanbul – has gained a huge following with western audiences in the last few years, with fans said to include Bjork. Such is his popularity that the 250-capacity Bla venue had to turn away latecomers, including those on the guest list, from the over-subscribed event. For those who made it in, Souleyman did not disappoint and it proved to be a blistering show.

Souleyman revved up the crowd with Arab wedding standards that lend themselves to rave music, which worked exceedingly well with the Oslo crowd.

Despite singing in Kurdish-Arabic in an Iraqi dialect and even speaking to the Norwegians present in Arabic, the end of each song was met with huge applause, so loud it would be easy to imagine that it was heard throughout the whole of Norway.

For those who had recovered from the night’s festivities that went on until the small hours, a talk followed the next day with Mashrou Leila, this year's main attraction.

An unavoidable topic was Sinno’s openly gay sexual orientation in a region of the world not so tolerant to homosexuality. The group have been banned from playing in Jordan - despite playing there four times - because of their political beliefs and songs. An audience Q & A with the band included topics on politics, gender equality and sexual freedom.

"Whenever you look at the numbers across the board socially and politically in Europe, in terms of people of colour, women and those who identify themselves as queer, there's an exclusion that comes from the government in terms of censorship," Hamed explains.

He then spoke about the cancellation of a show in Jordan: "We were scheduled to play a show in the venue where we have played four times in an old Roman amphitheatre in the centre of town. A few days before the show we received an official ban that claimed that we were at odds with the traditions of the Roman monument. Ironic seeing as how our last album was inspired by Greco-Roman mythology."

Later that evening, the Lebanese band played their debut Oslo show at the 500-capacity Sentrum Scene. Mashrou Leila looked as if they were enjoying themselves bantering with the crowd between sets. Even though they speak fluent – almost native – English from their time studying at the American University in Beirut, they sing the entirety of their tracks in Arabic.

The songs themselves are reminiscent of bands such as Wild Beasts with the experimental slant of Radiohead. With plans for a fourth album slated for release next year and recent sell-out shows in London and Berlin, as well as a successful recent US tour, worldwide popularity is within reach.

Maybe it’s time the world looked to the Middle East for inspirational music, rather than derision and bad news

For a number of years now the Beirut and Beyond Festival (BABF) has been involved with the Oslo World Music Festival, with collaboration between the two projects beginning in 2013.

“The idea for this festival started in 2011 and there were initially four of us," Amani Semaani of BABF says. "There was a lack of structure and no real platform for the music we wanted to showcase in terms of independent music in the Arab world, even though there were a lot of projects and artists in the region. But nothing was going on in terms of getting it more developed and professional."

In 2012, BABF promoted a show featuring world artists and the organisers from Oslo World Music attended. A bond was formed, says Semaani, with a possible view to develop a partnership and put on events together. "I went to Oslo a couple of months later and pitched the idea to the Norwegian minister of foreign affairs and shortly afterwards it morphed into what it is now.”

This year, the BABF stage featured Lebanese guitarist Youmna Saba, Palestinian-Jordanian electro-dabke group 47Soul, and the Armenian-American producer Bei Ru. Syrian rapper Latlateh had been slated to play, but due to visa issues, the authorities did not let him into Norway, or even transit via France, where he was residing. He had, however, sent over a video of several audio clips of his raps with a heartfelt message apologising that he could not make it over and saying that he hoped, one day, people could live in a world without borders.

Arab artists are thriving under the thumb of the establishment

If anything was learnt from the festival this year, it is that Middle Eastern music has never been in better shape. In the past, the Arab world used to look to the West for inspiration and escapism.

While Europe and America cry out for artists who are politically minded and challenge the status quo, Arab artists are thriving under the thumb of the establishment.

Because of this, today much of the world’s best music is being produced and created within the region, from songs of revolution in Tunisia, Electro Shaabi in Egypt, experimental music in Lebanon to dubstep in war-torn Syria. Maybe it is time the world looked to the Middle East for inspirational music, rather than derision and bad news. Refugees
Why are Norwegians holding candlelight vigils in support of asylum seekers?