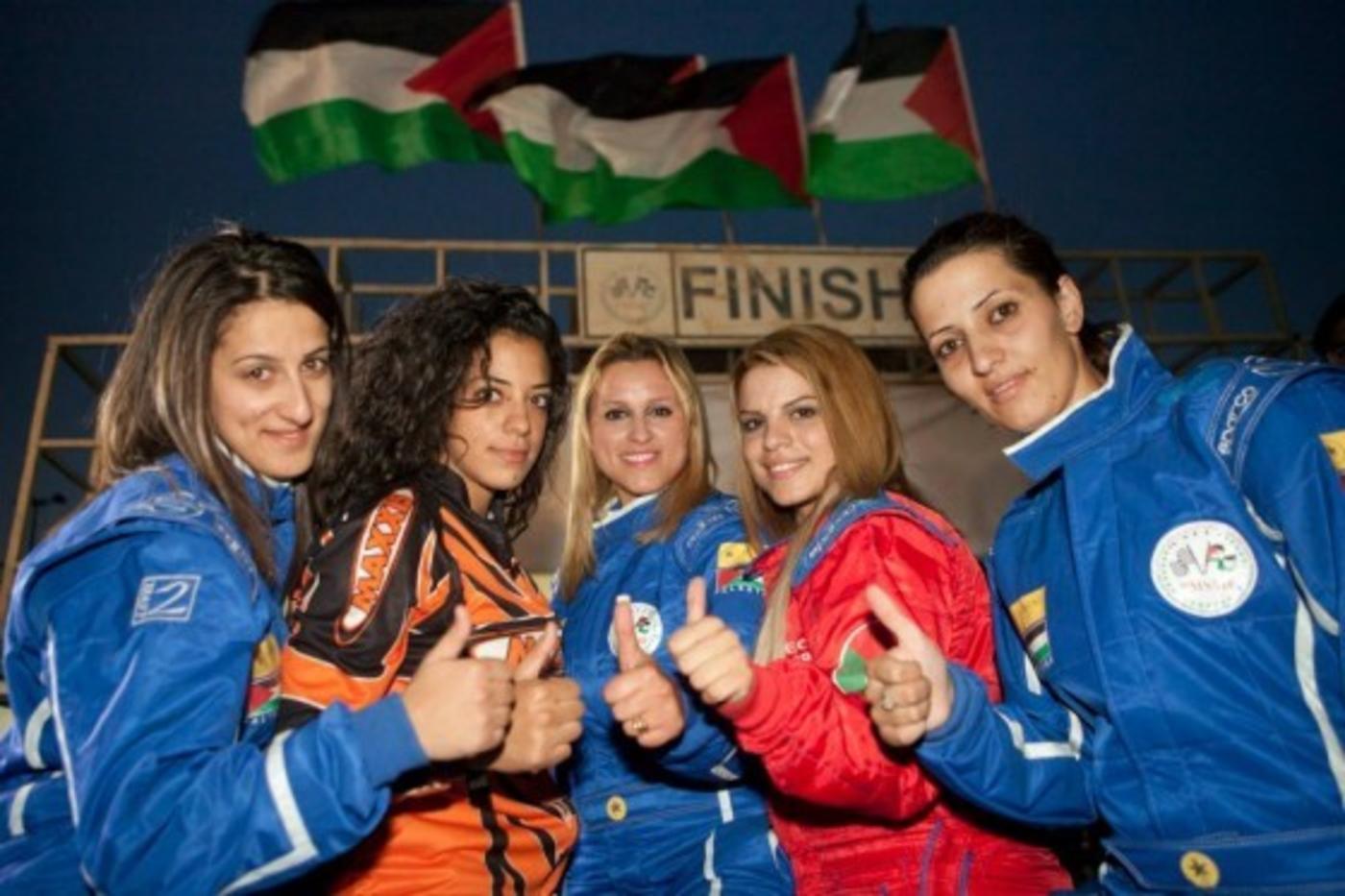 When Palestine makes the headlines it's usually because of wars, sieges, curfews and so on, but now there’s another reason. It's the home of the Middle East's first all-woman motor racing team.

In 2009, with the help of the British Consulate in Jerusalem, a team called the Speed Sisters was set up. Today that team consists of five women who compete professionally in the Palestinian car racing circuit and take part in races like the Palestine speed tests, autocross time trials and drifting.

Karen McLuskie, who was the British Consul at the time, has been credited for spearheading the project. She watched a race in Ramallah where she saw a few women compete against the men and decided to help set up a programme to encourage female participation in the races, helping them source funding and training.

The story of the Speed Sisters is not noteworthy simply because they’re women racers, and not only because they’re racing in a socially and religiously conservative region of the world, but because on top of that, they’re also racing under Israeli military occupation in the Palestinian West Bank. Taking all of those factors together is what makes them a unique team.

One of the biggest challenges for anyone racing in Palestine is space. Finding the room to accelerate their cars, some of which have been sponsored by Peugeot, in an occupied territory studded with 99 fixed checkpoints and hundreds of temporary “flying checkpoints” is a logistical nightmare. Even finding the space to practice, let alone race flat out, is a major headache.

Palestinian access to roads in general is limited. They’re barred from “settler only roads” and they don’t have control over the major highways, or anywhere else that cars are able to pick up top speeds.

There are no official race tracks in the West Bank either, so you have to be innovative to find a solution, and that’s just what the Palestinian Motor Sports and Motorcycle Federation has been busy doing. Over the last few years they’ve set up temporary makeshift tracks all over the West Bank. On any given morning you might find volunteers clearing market stalls to the side of the road in Jenin to make room for a pop up race course, on another day volunteers might be controlling traffic in and around the ancient city of Jericho, Ramallah or Hebron, getting ready for the racers to take to the streets. They’ve even been using Yasser Arafat’s old helicopter landing pad, which is perfect for practicing techniques like donuts or figure eights.

The little space that is available is lacerated by a network of Israeli military checkpoints as well as the separation wall which severely restricts movement for all Palestinians. The youngest team member Marah Zahalka (22) explained in a Ted X Teen talk that driving as a woman is not the main obstacle in Palestine: “When people ask me whether they let women drive in Palestine, I just smile and say: Of course, except when the military checkpoints get in my way.”

Zahalka has a similar outlook and sees racing as a form of resistance. “We need to resist the occupation by demanding to live our lives. For me, that means doing the things that make me happy, like racing cars.”

While the Speed Sisters have faced some disapproval from more conservative quarters, including people who say it is not appropriate, religiously or culturally, for women to be racing with men or for men to be in crowds cheering them on, this seems to be a minority voice, one they say they are slowly winning over. Zahalka describes how the disapproval of some of her neighbours slowly turned to pride as she started to win races. She makes it clear that a win for her is a win for her home town of Jenin and says they are very proud of her now.

Saadeh had a similar experience and says that at first people would challenge her and ask why she was always racing. That is until she started winning. Once she started getting first place prizes that is when the questions stopped and the cheering and support began.

These women did not set out to challenge stereotypes. That's been incidental. The Speed Sisters are kindred spirits, united by their love of speed and the addiction to the adrenaline that surges when they get behind the wheel.

Saadeh races because “racing is in my blood.” Her father was a rally champion in Mexico and her brother is one of the most feted racers in Palestine. You can hear the passion in her voice when she speaks of how she feels each time she gets behind the wheel, “I feel strong, I feel powerful, I feel free.” You can see why those emotions are so valuable considering the fact that they’re living under occupation, a situation in which you would expect most people to feel weak, and trapped. Racing is an escape from all of that.

Zahalka’s love for racing cars also developed at a very young age. She is from Jenin and in a Tex X Teen talk she describes her childhood growing up under Israeli military curfew. She also recalls sneaking out to drive her parents car, and then trying to get a fake licence so that she did not have to wait till her 17th birthday in order to try out for the Palestine Speed tests. She now holds the title of the “Fastest woman in Palestine”.

The team members are already local celebrities but their names will soon be known around the world when the documentary Speed Sisters is released in 2015. The documentary is being directed by Amber Fares who is Canadian-Lebanese and has been living in the West Bank for the last six years. She explained that "the film is currently in post-production but we are still raising funds to cover post production costs". Fares has high hopes for the project. “I believe that this film will go a long way towards shattering stereotypes of Arab and Muslim women (and men as well).  But at the core, it is a film about breaking through obstacles in our lives, to be true to ourselves and our dreams.  I hope that the film motivates and connects people around the world, who have felt boxed in by their reality and have wanted to go further and faster than they were told they could.”

This group of women may not have initially set out to break down barriers, but united by their need for speed, that's just what they've done.