Despite resistance from some men, SheFighter has helped train around 12,000 women in martial arts, fitness and empowerment 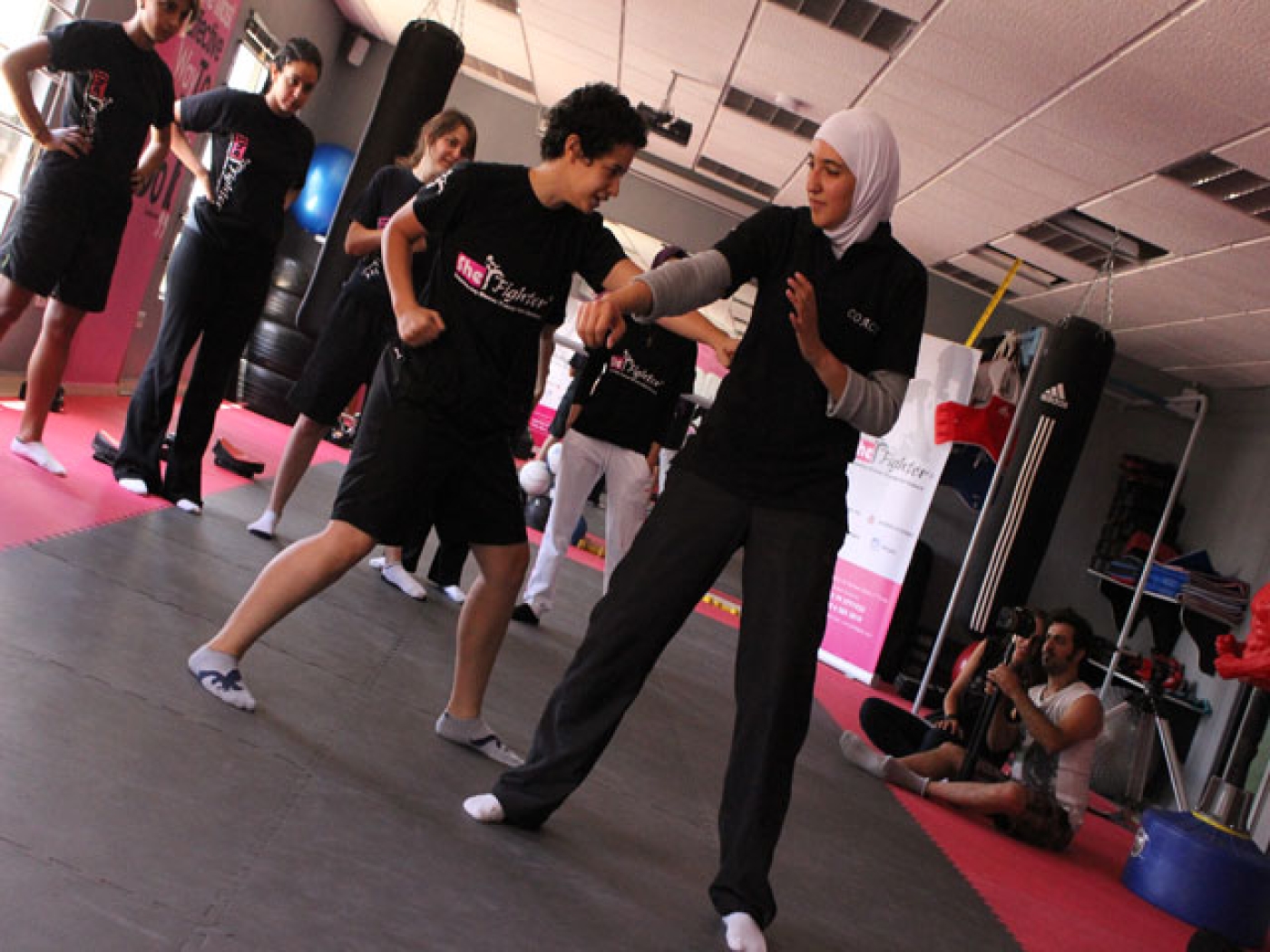 In a fourth floor studio on one of Amman’s busiest streets, Farah is teaching a class in self-defence.

She leads her students – all women aged between 15 and 30 – through a series of punching and kicking routines, helping them with handstands and sit ups, jabs, crosses, left-hooks... She strolls around the busy studio, chatting and laughing as she corrects her students on their moves and advises them on how to improve their techniques.

“Martial arts teaches discipline,” she says. “It allows you to grow into your own person. It helps you develop your personality and widens your perspectives.”

Farah is a trainer at SheFighter, Jordan’s first self-defence academy set up solely for women and which opened in 2012. Farah's interest in self-defence originally started out when she was a student attending classes herself, hoping to keep fit and get in shape, but then she got more seriously involved. “I wanted to learn how to punch and kick, partly because everyone says that girls cannot punch and kick,” she laughs. “I wanted to learn how best to get fit too.”

Dozens of women and girls attend the daily classes at the SheFighter gym, a space fitted out with colourful punching bags, with weights and dumbbells piled in the corner, and walls decorated in deep pink and bright purple with graffiti and motivational quotations emblazoned across them. The students take turns to spot each other or sit and watch as their friends try out their moves. There is a lot of laughter.

The SheFighter project is the brainchild of Lina Khalifeh, a young Jordanian entrepreneur who has dedicated her life to martial arts. In her office, which is filled with photographs and notes, you can clearly hear the pop punk music which is blasting through from the studio, but which barely masks the laughter and shouting of the classes.

Khalifeh says she has been “a fighter” since she was a kid, and started her martial arts career learning Tae Kwon Do. Her interests have developed beyond that now and the girls at SheFighter learn a range of mixed martial arts with a focus on self-defence, in addition to yoga and fitness. It is one of the many ways in which the club is different to those of Khalifeh’s childhood.

“When I was younger, fifteen years ago maybe, the whole concept of women in martial arts was negative. I used to attend training in a studio and there were only men and boys there. I had to move between four or five studios because of the harassment I got from the male coaches,” she explained.

Despite the challenges, she went on to earn a black belt in Tae Kwon Do. She also became an expert in kickboxing, kung fu and boxing, going on to represent Jordan in international competitions and championships.

The idea to start a women’s studio first emerged when Khalifeh was a university student. She started teaching her friends self-defence in the basement of her parent’s house but the space was extremely small and confining, not conducive to much movement or expansion.

Once she opened her first 100-sq-metre studio however, things expanded quickly, including the demand for more classes, but Khalifeh was doing everything alone and soon felt exhausted.

To counter that exhaustion and to help meet the high demand, she now employs a team of trainers and administrators – all women, of course – to keep the gym running; and SheFighter has expanded far beyond its Amman studio. There are self-defence classes for schoolgirls in areas with high numbers of refugees and vulnerable Jordanian families as well as workshops for rural women who have suffered violence and abuse.

Now in its fourth year, SheFighter has helped train around 12,000 women in martial arts, self-defence and fitness - while gaining international recognition.

Last May, after participating in an entrepreneurship competition, Lina was invited to the White House as one of three young entrepreneurs furthering business and development in the Middle East. President Obama highlighted her work and the SheFighter project in a speech. "I felt really happy, I couldn't even sleep at night," Khalifeh said of the experience. "They wanted to highlight women's empowerment and apparently I'm one of the few people in the field working in women's self defence."

The huge public acknowledgment was a nice nod to the work she does and gave a boost to her efforts.

Khalifeh finds that her role goes beyong that of a mere teacher and she often finds herself in the role of a therapist and friend as well as a personal trainer, starting her classes with discussion, talking and confidence-building excercises and often ending with participants letting off steam through punching exercises. She has also adopted something of a take-no-prisoners style to learning – focusing on encouraging women to be assertive and to depend on themselves.

“You actually find them [rural women] stronger than the city girls, because they’ve been through a lot,” Khalifeh says of many of the “vulnerable” women SheFighter targets. “I’ve met many, many strong women. They say they have an abusive husband, and they take a stand. They never let him touch their daughter or kids, and they end up leaving the house. You can see that they are strong when they are talking to you.”

For the women in the SheFighter class, strength can come in many forms. The trainers and participants say that most girls start classes with hesitance, but that after a few weeks they are throwing themselves into the sport and feel more assured that they would be able to handle themselves in tough situations.

In the evening classes, many of the women say they keep coming back to stay fit; whereas others are interested in building up their confidence or just making friends.

“It teaches us that women can fight and defend themselves,” Lujain, 15, said. She has been coming to SheFighter for two weeks and attends classes five nights a week. Her favourite is Fight Night, where girls put their combat skills to the test against each other.

“In our society things happen, and people can think that men are better than us, but that’s not right,” she continued. “Many of the people coming here have problems and these classes help them with that. But even if you don’t have problems – family problems or this sort of thing – it makes you fit and strong, and gives you self-esteem.”

Empowerment is central to She Fighter’s mission: slogans on the studio’s walls urge girls to “speak up even if your voice shakes,” and self-esteem and confidence is a theme Khalifeh returns to again and again in interviews. But not all the women she comes across are convinced of the same need.

“There’s resistance against women learning self-defence, especially in rural communities. I meet women who say, 'well, I have my fiance. That’s never gonna happen to me because he’s gonna protect me.' They seem to think protection and defence comes only from a male partner,” Khalifeh explained.

“But I think if a women doesn’t want to learn self-defence or martial arts, she’s in denial that she’s ever gonna be attacked. She could get attacked by her male partner, or someone who just wants to attack them in the street when her male partner’s not there.”

Does an attitude like this point to a broader problem of women’s views of themselves? “Women become more dependent on men, for many things,” Khalifeh continued. “Women are not confident enough in their own strength, what they can do in life, how much they can achieve, how they can become leaders, whatever they want to become. They always say I can’t do it, it’s for men; or, I prefer not to do it, it’s not for me. But they don’t know how much strength they actually have.”

“It’s not even just about violence, it’s pressure. It’s pressure on women not to grow. You have husbands, brothers, fathers, all of who interfere in all women’s decisions..... Men are being more dominating in relationships.”

A voice of empowerment

Interference hasn’t been absent from the SheFighter project either. Khalifeh has received threats from men in the past – they have waited outside the studio for her when classes end, and have even threatened legal action against the club. Most of the time, they are unhappy that their partners are learning self-defence, and want to stop them from coming to classes.

Other criticisms have come from the conferences and gatherings that Khalifeh – who has found she is become something of a spokesperson for women’s empowerment in Jordan – regularly attends.

“They always tell me, why did you start something for women and not for men. They say, we’re for equality, but we want equality for women and men,” she explained. “I open the yellow pages and say here are all the self-defence classes for men. We need something from women. These are educated people... I think they are just afraid of change.”

At the gym in Amman, the members don’t need any convincing that classes for women are a good thing. SheFighter is a gym, but it is also a safe space for women and girls.

As the teenage attendees take on punching bags and stretch themselves to reach their 50th push up, younger kids, brought along by their mothers, sprint around the studio. All the members, and the women who work at SheFighter, say it is the atmosphere of support and friendliness that really makes the club special.

“It’s so fun here,” Lujain said. “It’s a really beautiful experience, coming here and meeting new people.” In the fight to empower women, SheFighter is only just getting started. 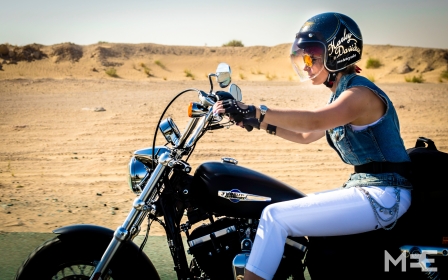 Women
Taking back the reins: Dubai’s female bikers in control 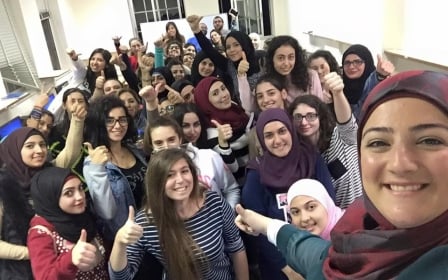