Syriac Christians in Palestine keep hope alive amid IS fears

The Syriacs of Jerusalem's Old City have been systematically expelled by Israel since 1967, but the community still has a strong identity 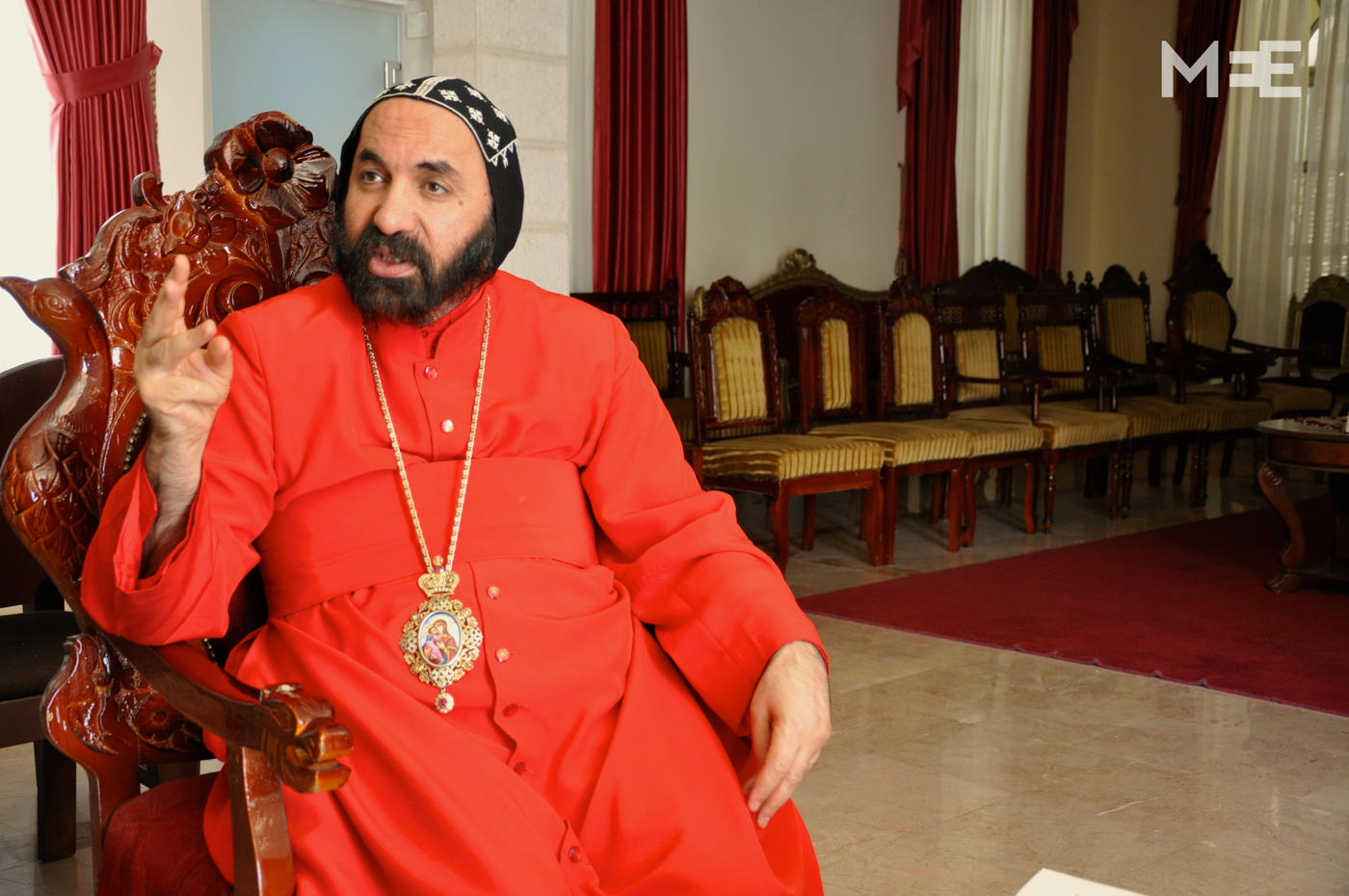 In an unassuming room off a quiet alleyway connecting the Armenian and Jewish quarters of Jerusalem’s Old City, the self-described mayor of this city’s tiny Syriac community holds court.

A prominent local tailor, Sammy Barsoum has for decades campaigned for the recognition of the approximately 5,000 Syriac Christians that call Palestine home.

Behind sewing machines and rows of colourful scarves hang picture after picture of Barsoum smiling beside the many personalities that have stopped by for a visit. British mayors, Lebanese patriarchs, American celebrities, Syrian bishops and Israeli mayors vie for space on his pinboard, squeezed between pictures of Barsoum visiting relatives who have long-since emigrated to Sweden or the United States.

The display is a testament to the prominence this community has managed to achieve despite its tiny size.

Palestinian Syriacs are the descendants of a few dozen families who fled southeastern Turkey in the 1910s during Ottoman massacres targeting the community’s historic homeland. Around 300,000 Syriacs were also said to have been slaughtered alongside 1.5 million Armenians in the genocide, called "Seyfo” in Aramaic, or “Sword.”

Some members of the Aramaic-speaking community fled to Iraq or Syria, where the closely related Assyrian communities lived and continue to do so. Others sought refuge further afield. A few hundred made their way to Jerusalem, settling down around Saint Mark’s Syriac monastery near the Armenian Quarter.

The community assimilated into their new home, learning Arabic and slowly losing the Aramaic they brought with them. But they held onto their distinctive identity in the streets of what became known as the Syriac Quarter. Along with a few hundred Syriacs in Bethlehem, the community became a small but important part of Palestine’s cultural and religious mosaic.

But in the years since, the advent of Zionism and the establishment of Israel have taken a toll. In 1948, hundreds became refugees when Israel was founded and 750,000 Palestinians were forced to flee their homes. The scene was repeated in 1967, while the economic toll caused by occupation and the later Israeli crackdowns on the intifadas led to a steady stream of emigration.

The confidence radiating from Barsoum’s smile in the portraits masks the fact that the community has seen better days.

“All of this used to be the Syriac Quarter,” he told Middle East Eye wistfully, gesturing from his shop toward the Jewish Quarter. “In 1967, when Israel took over, it was all Syriacs on this road. They took everything, every single house, and today there’s not a single Syriac left.”

Following Israel’s occupation of Jerusalem in 1967, hundreds of Syriacs were expelled and their homes and shops given over to Jewish settlers. Today, the area is part of the Jewish Quarter - which expanded to several times its original size through the dispossession of 6,000 non-Jewish residents.

The decades since have seen repeated persecution of the sort that has targeted all Palestinians.

In Jerusalem, non-Jews are rarely given permission to build or add to their homes, while those who leave for more than seven years are permanently stripped of their right to return, even if they can trace their roots in the city back generations. Checkpoints, harassment by ever-present Israeli soldiers and settlers, and summary detention are the stuff of daily life.

Over the decades, the daily humiliations of Israeli rule have become commonplace. But the rising climate of sectarianism across the Middle East is creating a new source of anxiety, with growing fear that groups like the Islamic State (IS) are bent on upending Christian communities that have for centuries lived amidst their Arab compatriots of other religious backgrounds.

Growing fear of IS

Palestinians watched in trepidation as IS swept across northern Iraq in the summer of 2014. Among the millions displaced were hundreds of thousands of Assyrian Christians, an Aramaic-speaking community with a close affinity to Syriacs. The July 2014 IS edict calling for the expulsion of Christians from Mosul realised the worst nightmares of many across the region.

Since the US invasion in 2003, Iraqi Christians have borne a disproportionate share of the violence that left more than a million dead (following the million dead from US-led sanctions the decade before). Although the vast majority of the victims were Muslim, the overall decline in security and a series of bombings targeting churches led around a million Christians - of 1.5 million total - to emigrate.

The targeting of Iraqi Christians seemed incomprehensible for other Arab Christians, who have long been an integral part of the Arab world. But amid rising US militarism across the Middle East, a discourse emerged that viewed local Christian communities as fifth columns for Western invaders.

The discourse existed primarily at the margins of society, but occasional personal conflicts or land disputes between individual Muslims and Christians gave way to such framings. The rise of IS in Iraq and their expansion into Syria converted this marginal trend into a potentially existential catastrophe.

Archbishop Sewerios Malki Murad is the spiritual head of the Syrian Orthodox Church in Palestine and Jordan, but he is from al-Malikiyah, a mixed Kurdish, Syriac and Armenian city in northeastern Syria around 200 kilometres from IS frontlines. He fears that any worsening in the situation will devastate the region’s Christian communities.

“If the wars continue, the future is black,” he told MEE in an interview at the Archbishopric, just down the road from Barsoum’s shop. “Anytime there’s a war in the Middle East, it’s bad for Christians.”

A history of emigration

Christians in Syria, Jordan, Palestine, and Iraq have historically had slightly higher rates of emigration than Muslims. The communities tend to be more urbanised and more educated than average, and as a result more easily seek economic opportunities abroad.

There is another major reason that encourages Christians to emigrate that is less-discussed: Western countries are generally more welcoming to Christians applying for visas than Muslims.

As a result, a steady trickle of emigration has long been the norm. Sudden mass flight, however, has not.

“Before the war, maybe 10 percent of Christians would leave over time because of the general lack of economic opportunities. But now it’s half,” the Archbishop lamented. “Before you could be patient and hope the next year would be better. Now there is no way.”

In Jerusalem, the plight of the Syriac community is highlighted by the community’s beleaguered state under Israeli rule.

In Bethlehem, meanwhile, just a few kilometres south but behind the massive concrete wall Israel has built through the West Bank, Syriacs are a highly prominent part of social life. Besides having a large Syriac Quarter nearby the Nativity Church, Syriac flags and stickers are displayed on many cars and community flags are frequently festooned throughout the Old City.

The community fits neatly into Bethlehem, which is mixed between Christians and Muslims. But even here, the priest at the Mother of God Syriac church expresses concerns for the future.

“With the changes happening in the Arab world, there are incomprehensible question marks forming around the future of Christians in the Holy Land,” Father Butros Nimeh told MEE.

“There is a return to sectarian identity across the board among all communities instead of a reliance on the state,” he continued. “This did not come out of a vacuum. The oppression and suffering that the Arab people are enduring, as well as the West’s role in feeding this sectarian climate, is a central part of the problem we are facing.”

“We’ve been living among Muslims for 1,500 years and never before heard this kind of rhetoric.”

Although there is no IS threat in Palestine, the sense that something has shifted is pervasive. This is compounded by developments inside Israel itself, where authorities have reached out to Palestinian Christians by citing common cause against Islamists.

In April 2014 Israel announced it would recognise an “Aramaean ethnic identity,” ostensibly so that Palestinian Christians could distinguish themselves from Muslims.

Archbishop Murad laughed when asked if Syriacs, who consider Aramaic their holy tongue and the mother tongue of their ancestors and often identify as “Aramaean,” viewed the move as beneficial. Other Syriacs MEE spoke to were similarly dismissive, considering it a meaningless and nakedly sectarian gesture.

While a handful of Christians inside Israel have signed up, Syriac leadership and other mainstream Christian leaders denounced the move as a ploy to “divide and conquer” Palestinians.

The identity move occurred in tandem with Israeli attempts to encourage Palestinian Christians who are citizens of Israel to join the Israeli military. Authorities have helped prop up marginal figures like Father Gabriel Naddaf to encourage Arab youths to enlist, despite the fact that Muslim and Christian Arabs are exempt from compulsory military service.

There are about 150,000 Palestinian Christians inside Israel, and the idea of taking up arms against other Palestinians is widely considered abominable among the community. But a handful of youths still sign up annually.

For Syriacs, the strangeness of their current situation is compounded by the fact that when their ancestors were persecuted a century ago, it was the Arab world that welcomed them with open arms.

Despite concerns about IS, for Palestinians it continues to be the violence of Israeli occupation and its economic effects that defines daily life. But the white cobbled streets around Bethlehem’s Syriac Quarter are largely free of the Israeli military presence, Jewish-only settlements and constant firing of tear gas that defines life on the town’s edges.

Despite the long shadow cast by IS abroad and Israel at home, shoppers continue about their daily business and life goes on as always in the little hilltop town where Jesus Christ was born two millenia ago.

“People think about the challenges facing Syriacs elsewhere,” Issa Bassous, a Syriac antiques merchant in the Old City, told MEE in his shop. “But here we all live together normally and there are no such distinctions between Muslims and Christians, or Orthodox or Catholic or Jewish.

“Everything is good in Bethlehem, unlike in Iraq or Syria where Christians are being forced to flee their homes and native lands. I wish the world could be peaceful and that everyone could love one another. But unfortunately, it’s just not the case these days.” Syria War
Syria's Christians struggle to rebuild after IS retreat