The Syrian smuggler and the refugee: Bullets, beatings and babies crying 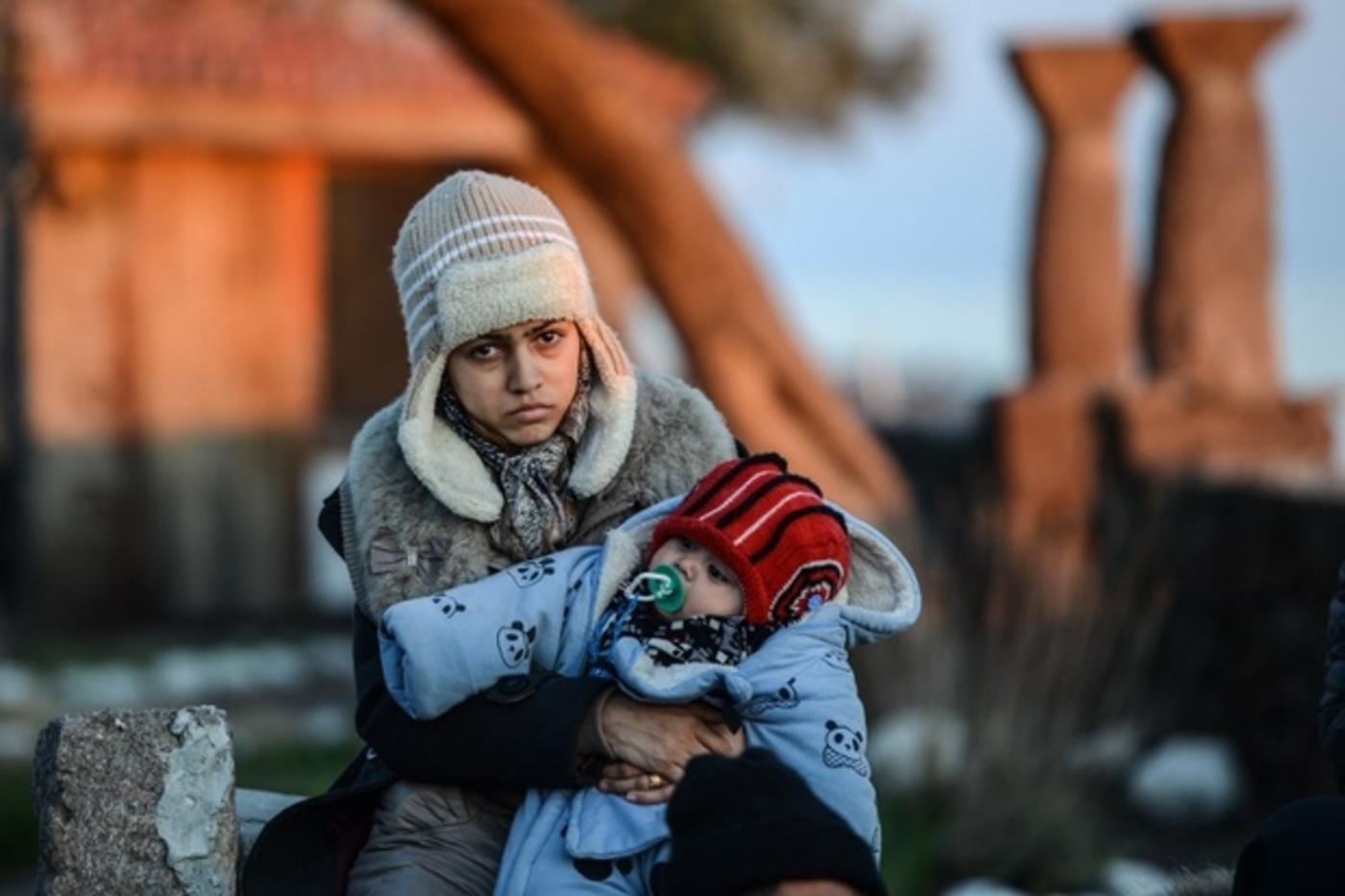 Middle East Eye explores the two sides of smuggling on the Syrian-Turkish borders by telling the stories of Abo Jamal, a smuggler from Idlib, and Fatima - a refugee whose only way out of Syria was illegally.

How did you decide to become a smuggler?

Before the war, I used to work as a barista to support my family. But as the violence came closer to Idlib City, I moved towards the countryside. Money became increasingly scarce and I could no longer afford to feed my family. That’s when I decided to become a smuggler.

It is a dangerous job. I can get caught by the Turkish police and end up in a prison or beaten up at any time, but I have no other way of earning a decent living.

Smuggling is like an adventure. I’ve been arrested by the Assad government and shot at by Turkish police, but I'd much rather do this than fight in battle

The money I used to make as a smuggler was a lot better, but since the Turkish authorities increased security along the borders, the job’s become a lot more difficult and less people are attempting the journey.

People always think that as a smuggler, I make a lot of money. I charge each person about $500. But I don’t because I don't keep it all to myself. I have to pay plenty of bribes and there is a large network of smugglers who help secure the roads that I have to pay as well.

I'm content with my job and I don’t ever think of going to Turkey myself. My life is settled here and I know that I if I were to leave, I would struggle to find a job.

What were some of the most difficult moments you faced on the job?

Smuggling is like an adventure. I was arrested by the Assad government once and shot at by Turkish police many times, but I’d much rather do this than fight in battle.

One of the most memorable moments for me is when the Turkish police spotted me and a group of about 100 refugees I was smuggling across the borders. They started shooting at us and things went completely out of control.

We tried to hide in some bushes, but the police caught up with us. They beat all the men so hard so that they would point out the smuggler – me. The whole group was then taken away and searched at a camp before they sent us all back to Syria. The whole time I was completely horrified I would be found out.

I feel sorry for those people, especially the ones who’ve been trying to cross over for months

That time, I also remember feeling really distressed about the way the police were behaving towards the women in the group; taking selfies with them and searching them up and down. It felt horrible that I couldn’t do anything to stop them or to stand up for them.

Another incident that left a deep scar in my memory was when an old woman got caught and left behind. The police had spotted us and they’d started running after us so we ran towards some trees. One woman couldn't keep up and she got stuck between two fences. The police were right behind us. No one could help her. We just had to let her go.

How do you feel about the refugees you help across the borders?

Before we take off, I make sure that they know every detail and possibility. I tell them how long the journey is expected to take, how much it will cost and what might happen if the operation fails. So the people I help across the borders are well aware of the risks and the dangers involved.

Because of that, at the beginning, I felt that the people I smuggled were just a source of income. I’d feel a little bad when people were caught and beaten by the police, but I also told myself that they’d undertaken this trip with full knowledge of what they might face. To me, it was just a deal: I offered them entry into Turkey, and they paid the price for it. It was also a fair deal in my view. I’d only get the money if I succeeded in getting them across.

But now, I feel sorry for those people, especially the ones who’ve been trying to cross over for months and haven’t managed to make it. Even though I try not to, I do get emotionally involved. I am a human being at the end of the day and I always try my best to protect them. I always walk them all the way until they reach a safe point in Turkey. Only then do I turn back and leave.

How did you decide to leave Syria by smuggling?

After I lost my husband and youngest son in an air strike that hit our home in Idlib in 2016, I was left with my 17-year-old son Ayman.

Life was getting harder every day and I felt I had nothing left to stay for. Most of my family and friends had already gone to Turkey, and especially since after the fall of Aleppo, everyone was telling me to do the same.

The situation in Idlib was also very volatile; things could escalate at any moment and I didn't want to go through more of the fear and desperation I had already experienced.

So I made the decision to leave and the only way out was to cross the border into Turkey.

As soon as my heart was set on it, I quickly found a smuggler that people were recommending and made a deal with him to cross into Turkey with a group of about 40 people near the Harem border.

What were the most difficult moments you faced during your journey?

The whole thing was difficult from beginning to end. The many times we were about to get caught, the time we were actually caught, the failed attempts and even when we finally made it into Turkey, all of it was difficult.

But the first incident that springs to my mind was at the start of the journey when we stayed in an old tent near the borders. The place was surrounded by mud and everything smelled awful. The smugglers told us to stay there and not let out a single breath until the coast was clear. I remember the mothers being told off because they couldn’t get their children to stop crying. They put their hands over their babies’ mouths so hard they were about to suffocate them.

I was terrified we’d be caught by the police again. My legs were shaking the whole journey

We had been walking for hours feeling cold, hungry and utterly exhausted. As we approached the crossing, all I could think of was that the police might catch us. And that’s exactly what happened. All of a sudden, the smuggler started yelling, telling us to run as fast as we could. People were screaming and children were crying.

Everything was complete chaos. I remember hearing the sound of gun shots everywhere and the voices of people speaking in Turkish coming closer and closer to us. I just kept running.

When we were caught the police beat the men so hard. They took our names down and walked us back across the border into Syria. I felt completely shocked. We were back to square one. The only thing that kept me going was that I had my son with me through those moments.

We tried again a few weeks later. I was terrified we’d be caught by the police again. My legs were shaking the whole journey. When we finally began to see lights and houses coming into view, the smuggler told us that we were taking our final steps. I couldn’t get myself to trust him. My heart started to beat so loudly with each step I took - I couldn't bear the thought of getting caught again.

When we got past a final hill and walked into Antakya, my heart was so full. I felt so grateful to have made it. My son and I are safe now, but every day I still wish I was back in Idlib.

How do you feel about smugglers?

Smugglers are after making a fortune and nothing else. To them, we're just money.

The smugglers I dealt with were very nasty, especially when children were involved. There were always yelling at the mothers and telling them to get their babies to be quiet.

They're such liars as well and no one trusts them. They lie about the level of danger on the road and the length of time the journey will take.

Smugglers are just after making a fortune. To them, we're just money

But just like everyone else, I had no other choice. Legal means of getting across the borders into Turkey are closed to us, so this was my only way out.

The first guy I dealt with told us that we would only end up walking for about an hour. Whenever we asked about how much time we had left, he would just keep saying another hour. We ended up walking for eight hours. I will never forget how cold, hungry and scared I felt in those woods.

When we got to the borders, the smugglers raised the price we'd agreed on. They threatened not to let us go if we didn't pay an extra $50. And when we reached the town, we were forced to pay even more for the car transfers into Antakya's town centre.