In the past, Palestinian farmers paid no attention to olive leaves, but now the company Palolea is harnessing their nutrients 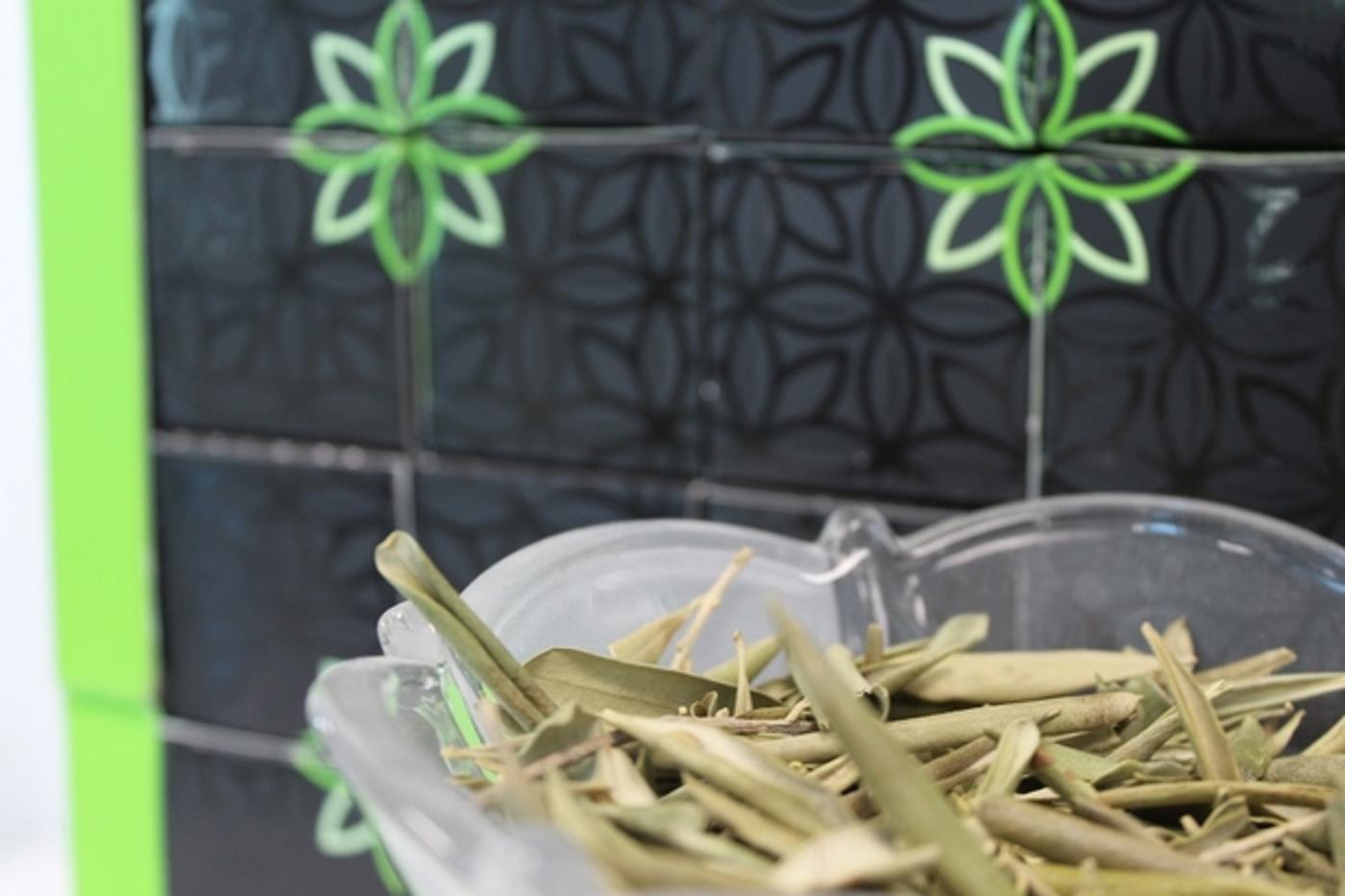 The nutrients from dry olive leaves are extracted to create a paste, which is in turn transformed into Paloleaf tablets (MEE/Mary Pelletier)
By
Mary Pelletier

JERICHO, West Bank - There is not much to see on the quiet road between the Palestinian city of Jericho and the Dead Sea. The early summer air weighs heavy over the desert land, at 258 metres below sea level, with a few scrub trees dotting the dusty terrain. It is probably the last place a visitor would expect to find fully operating chemistry and microbiology labs, industrial-grade extraction machines, and a pharmaceutical assembly line.

But about three kilometres outside the city centre, Palolea, Palestine’s first olive leaf extract company, has set up shop at the Jericho Agro Industrial Park. At 9am on an average Wednesday, the park is just starting to hum to life. Yet the work day is in full swing at Palolea and young Palestinian men and women are buzzing around the pristine factory in white lab coats.

“My biggest fear was, why hasn’t anyone done this before?” Hitham Kayali, the owner and general manager of Palolea said, explaining how he decided to create a company that harnesses the health benefits of the olive tree in a new way – by extracting nutrients from its leaves.

Kayali had seen companies in the UK and New Zealand selling olive leaf extract tablets and claiming for them significant health benefits such as lowering blood pressure and boosting the immune and cardiovascular systems. But in his home country of Palestine, where the olive tree is deeply embedded in the cultural and economic landscape, farmers paid little attention to the olive leaves, which were traditionally thrown away or burned after the yearly harvest.

“There’s such a huge dependence on the olive sector in Palestine in general,” Kayali continued. “Palestinian olive oil is probably the most significant export that we have. So why had no one done this before?”

In Palestine, the olive tree is revered as a national symbol of resilience, steadfastness and prosperity. Able to sustain itself in the driest Middle Eastern conditions for thousands of years and bear fruit prized for its taste, the olive tree also represents a deep connection between Palestinians and their land.

At the same time, it is a key component in the economy, and forms the basis of olive oil, olive wood and olive-oil soap industries up and down the West Bank.

“We’ve got 80 percent of agricultural land covered with olive trees and it’s not a tree that’s isolated,” Kayali told Middle East Eye. “It’s part of people’s culture here, it’s part of Palestinian identity. The idea behind Palolea is that we produce active ingredients from what nature has to offer here in Palestine. And that’s new not just to Palestine, but to the Arab region in general.”

Kayali’s background was economic rather than pharmaceutical, having served as the former director of the Karameh National Fund and the Palestinian Authority’s programme to combat illegal settlement in the West Bank. But after conducting research into the health benefits afforded by olive leaves, and the global market for olive leaf extract, he saw an opening for Palestinian business that offered an edge over the competition.

“There’s a lot of investment [internationally] in something that we throw away over here,” Kayali said, referring to the olive leaves themselves. “The defence mechanism of the tree itself is in the leaf. And this is a tree that lives for thousands of years. This substance that’s inside the leaves protects the tree from all the natural hazards, viruses, diseases. And because it’s an antiviral, antifungal, antibiotic, it’s a preservative itself.”

Palolea’s main product, Paloleaf, is a small tablet, imprinted with a simple olive leaf design. They come 60 to a bottle, and crammed into that tiny tablet, Kayali says, is enough Oleuropein, or active ingredient, to equal the amount in half a litre of freshly pressed olive oil.

'The defence mechanism of the tree itself is in the leaf. And this is a tree that lives for thousands of years. This substance that’s inside the leaves protects the tree from all the natural hazard'

In the middle of Palolea’s gleaming factory, surrounded by two huge steel extracting and evaporating tanks, Haneen Ashab explained the detailed process used to extract the active ingredients from the dry leaves.

Everything is done on site in Jericho: olive leaves arrive in from farmers across the West Bank, and the oleuropein is pressure extracted, forming a thick green paste.

It is then dried, ground into a fine powder, mixed and pressed into tablets. Bottled and boxed on site, the green, black and pink Palolea has been popping up in pharmacies around the West Bank for the past six months.

According to the concentration levels labelled on the bottles, Paolea's active ingredient is 281mg, which is significantly higher than most products on the market from Europe, Australia or the US.

Palolea doesn’t require a prescription, but interest among the medical community in Palestinian cities like Ramallah is growing, with doctors recommending the supplement for diabetes and hypertension treatments. But at the price of approximately $20 per bottle, it doesn't come cheap.

"This is the first product like this to come from Palestine," Khaled Siam, a pharmacist at Ramallah's Siam Pharmacy, told Middle East Eye.

Paloleaf has been introduced to the local Palestinian pharmaceutical market slowly over the past few months and it's official launch will take place this summer.

"Doctors are prescribing it, and most of the pharmacies in Ramallah are now carrying it. Paloleaf is all natural, and there are a lot of reports about its benefits for cholesterol, and for diabetic patients, so we are giving it a try."

Upstairs, in the microbiology lab, Sameh Abu al-Rob studies the longevity of Paloleo, which currently has a shelf life of two years.

“We are not just waiting for complaints from the market,” Abu al-Rob said, explaining that the company constantly monitors their product to assure its quality, and also to improve its stability for a longer span of time. “There is a certain protocol to take exact samples of certain batches for a stability plan through the year, and we take certain batches to keep looking at how our product behaves.”

'This is the first product like this to come from Palestine'

Kayali’s attention to international pharmaceutical standards is apparent throughout the factory. He is following standards that apply not only in Palestine, but have also been certified by the European Food Safety Authority and the Jordan Food and Drug Administration.

The company is currently in the early stages of using online sales to export to the United Kingdom, and it is working to have the extract registered with the food and drug authorities in the UAE and Saudi Arabia.

When Palolea began construction on their factory in 2013, they were the first company to enter into the Jericho Agro Industrial Park.

“Hitham was the unknown soldier,” said Dr Ali Shaath, CEO of the Palestinian Industrial Estates and Free Zones Authority (PIEFZA). “He was the first experimental factory, because we had no previous experience in the West Bank in particular for developing industrial zones. It was a desert, a complete desert.”

'We had no previous experience in the West Bank in particular for developing industrial zones. It was a desert, a complete desert'

After the creation of the Palestinian Authority in 1994, opportunities for growth emerged in Palestinian economic sectors, but became increasingly hampered by regulations imposed under Israeli occupation. In the late 1990s, PIEFZA was established to help absorb the Palestinian work force that had lost the ability to work in Israel after the Oslo Accords were signed.

A joint public and private sector organisation, its goal was to provide incentives and support Palestinian businesses through new infrastructure initiatives and guide developmental decisions.

Industrial parks, offering government subsidies for businesses, took shape first in Gaza, and then in Bethlehem, Jenin and Jericho. In 2006, the Japanese government began supporting the Jericho initiative, where Kayalic constructed the Palolea factory as part of their Corridor for Peace and Prosperity Corridor in the Jordan Valley.

“Palestine is in short supply of land,” Shaath said. “It would be very expensive for him to buy a piece of land for him to build his factory in Nablus, or Ramallah. Therefore this idea of an industrial zone, where the government is making the land available, and is responsible for the infrastructure, like roads and water, that provides an incentive.”

And while Kayali’s business has benefited from governmental subsidies and infrastructure plans, his company is also helping Palestinian farmers enjoy additional profits from their yearly olive harvest.

“We approached families we knew prune the trees after the olive harvest and we employed people that would gather the stems that are pruned,” Kayali explained. “It works out to costing us about $2 per kilogram of leaves, which is more expensive than a kilogram of olives [around $1], but that’s a translation of the labour that you need. It’s obviously a very important source of additional income.”

For Shaath, Palolea’s process is a win-win situation, fulfilling the mission of PIEFZA and the Jericho Agro Industrial Park. And it does not hurt that he sees the benefits of Palolea in his own life.

“Even before Palolea started full production, I decided to be the first experimental human being and at my own discretion I started to take two tablets, one in the morning and one at night,” Shaath said.

“I have some sort of internal belief that this tree is a holy tree. To tell you the truth, I really feel more active!" he added. 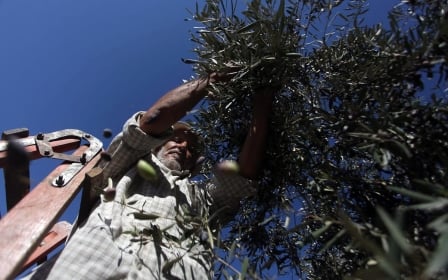 Occupation
The joys and sorrows of olive season in Palestine 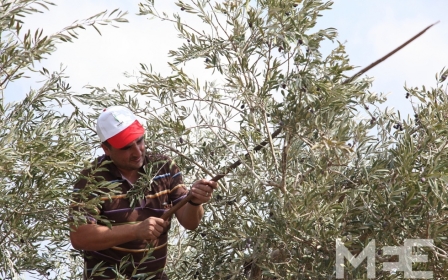