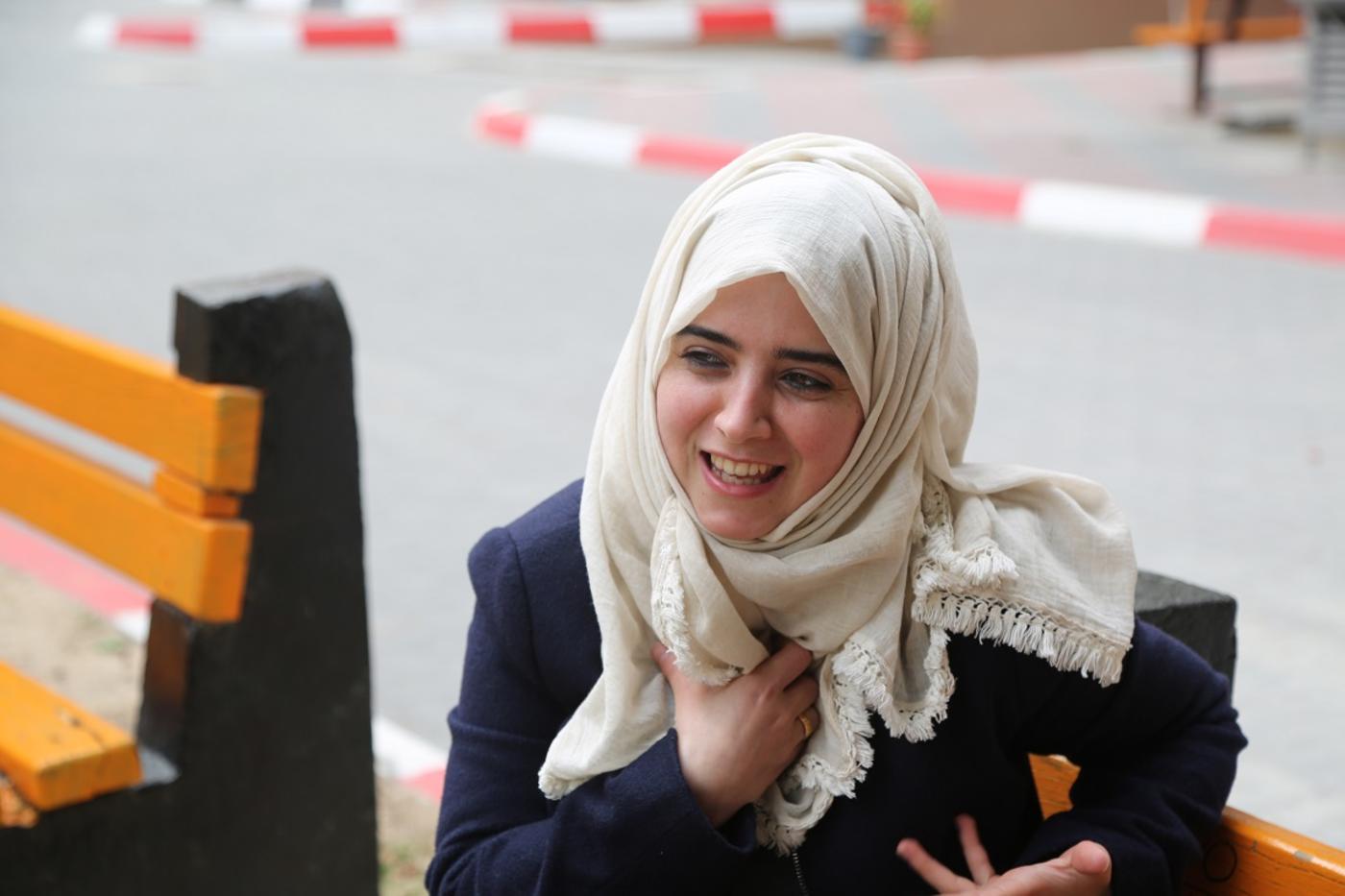 GAZA STRIP - It's not your average dream, yet 26-year-old Rukiye Demir is far from being a typical young woman. Since childhood, the determined Turkish native has dreamed of pursuing her masters degree in Gaza. The besieged Palestinian enclave has always been close to her heart.

Growing up in a conservative family where Palestine solidarity was abundant, her family did not try to dissuade her when this dream became a reality.

'I kissed the sand. I did not believe that I was finally in Gaza'

The youngest of seven siblings, her parents' concerns were diminished by their daughter's convictions to be one with the Palestinian people despite the risks involved.

Many young Gazans long to leave the impoverished strip and go to great lengths to study abroad. But due to border restrictions and a lack of free movement imposed on them by both Israel and Egypt, leaving Gaza is a rare occurrence.

Israel has imposed a blockade on Gaza since 2007, following the election of Hamas. Additionally, Egypt has for the most part kept the Rafah border crossing closed since the overthrow of elected president Mohamed Morsi in a 2013 military coup, only allowing Gaza's residents to cross over during brief and exceptional intervals. This forces many students to give up their ambitions to seek degrees from foreign universities.

In recognition of this and the struggle of Palestinians to exercise their rights to education, Demir struggled against the odds in making her way into Gaza and experienced first-hand what it was like to be denied basic human rights.

"I was among several Palestinians waiting for a rare window at Rafah crossing. We kept waiting for five days in light of a lack of commodities and comforts: no clean water, no beds. We used to sleep on the freezing ground."

When the border finally opened and she took her first steps on Palestinian land, the suffering she endured disappeared into thin air. Joy overcame her and she kneeled down to show her gratitude. "I kissed the sand. I did not believe that I was finally in Gaza," Demir said.

Experiencing the hardships that Palestinians endure on a daily basis and being trapped in Egypt waiting for the Rafah crossing to open was "all worth it" for her, she added.

From Malaysia to Gaza

Once a passionate student of astronomy at Izmir University in Turkey, her ambitions of studying the stars were eventually interrupted when she realised that her religious beliefs and her rights to express them were being trampled on.

Because Turkish universities were at the time meant to be "secular" as institutions of the state, women were forced to remove their hijabs once on campus. If women did not abide by the headscarf ban, they risked being kicked off university grounds. The ban was lifted from almost all universities in Turkey in 2010.

In objection to this official order, Demir left Turkey to study in a Muslim country where she could fully be herself. As a result, she ended up at the University of Malaysia where she had to start from zero again, as majoring in astronomy was not an option. Though she did not find exactly what she was looking for there, choosing psychology as her next best option was an adjustment she was happy to make.

While pursuing her studies in Malaysia, her aspiration of pursuing higher education in Gaza did not wane. Fellow Palestinian friends were amazed at how tenacious Demir was in her frequent conversations about her beloved Gaza. But they did not believe it would be as easy as Demir thought, because as Palestinians themselves, not even they were able to enter Gaza with all the restrictions and border issues.

"They told me that this was pretty impossible," and that 'We ourselves cannot enter Gaza though we are Palestinians'," she said. Yet fortunately, she had some hope via connections through academic institutions in both Malaysia and Gaza.

"I did not simply give up my dearest dream, as I managed to ask for help from those who had connections to the educational institutions in the Gaza Strip," Demir said.

Once Demir had done her research, she sent a letter to Palestinian engineer Alaa el-Dein al-Haikto, a family friend in Gaza who had obtained his masters degree in Turkey. Haikto had solid connections with the Islamic University of Gaza and was more than happy to assist Demir in her quest.

"I encouraged her to apply to study at the Islamic University of Gaza (IUG) and put her in touch with the administration of the university to finish the admission and registration process," Haik said.

The admissions team at the university was thrilled to have Demir as a candidate for formal acceptance and did all they could to facilitate the application process. For IUG staff, her wish was seen as something bigger than the obvious. To them it was a message of solidarity with the people of Gaza. Soon enough an official letter of acceptance was sent to Demir and the deal was done.

"Demir's move was courageous and a first of its kind," Haik pointed out. It sent out an obvious message that Gazan people are no longer alone, and that their continued languishing on this besieged land is being appreciated by their brothers and sisters in the Arab and Islamic world.

When she finally made it to IUG,  professors were very accommodating and fellow students very supportive. Though she did know some Quranic Arabic from previous study, her Arabic was not strong enough to understand the lectures. In order to facilitate learning during the beginning of her first semester, Dr Samier Qouta lectured in both English and Arabic during psychology classes.

"This is our duty to make sure that her study at our university goes as easy and smooth as possible. We are so happy for her venture and proud that our university received a Turkish student," Qouta said.

In a demonstration of the appreciation that IUG has for Demir, arrangements have been made so that her final thesis can be written and discussed in English, furthering the supportive environment bestowed on her.

"We look forward to having more international students who are willing to express their advocacy for the fair Palestinian cause and overcome the unjust Israeli blockade imposed on Gaza."

At the end of her first semester at IUG, it was clear that Demir was thriving at the university, as her Arabic language skills had significantly improved.

"One of the major things that drew me to study in Gaza was the golden opportunity to hone my Arabic language skills, as I am completely immersed in an Arab community," Demir said.

The experience also allowed for Demir to make lifelong friends that she is very grateful to have met. One of those friends is Reem Ahmed, who was part of the same masters programme at IUG.

"We are so lucky to have Rukiye with us at our study. She has given our classes a different taste. As a group in higher education, we do our best to ensure that our Turkish sister feels good at the lectures and comprehends what the professors say," Ahmed told MEE.

It was no surprise to Ahmed to know that there are many Turkish people that stand in solidarity with Palestinians. However, she did say that she found it extraordinary that a young Turkish girl would forgo the opportunity to study at prestigious universities abroad.

Though Demir is without any family in Gaza, she is often surrounded by friends and neighbours who have never allowed for loneliness to set in.

"I am so grateful to my friends and neighbours who let me feel at home in Gaza. They are always by my side," Demir said.

Though Demir has not seen her family in several months, they keep in touch regularly on video calls.

"My mum was amazed when she noticed that I put on weight in Gaza. She told me that this is a sign that I am healthy and satisfied."

One of the people who has taken Demir under her wing is her neighbour Tamam Mahani. Mahani has five children and has taken in Demir as if she were her sixth.

"She has become a member of our family. We are so happy that we are both neighbours. It is amazing that a girl raised in a country like Turkey has the courage to live in a dangerous city like Gaza," Mahani told MEE.

These close friends have become fundamental emotional support for Demir, especially when witnessing the severity of what living in Gaza can really feel like.

Not having experienced war or turmoil in Turkey, her first brush with standard Gaza violence caused her to nearly freeze in fear.

During her first night in Jabaliya refugee camp, a couple of Israeli raids took place near Demir's flat. She had never seen military planes or shelling take place, and luckily no one was hurt in what turned out to be an empty base for Palestinian resistance.

'People of Gaza deserve to live in peace. It is unfair that they have been always subjected to atrocities and war crimes'

On the morning after, a terrified Demir rushed to her neighbours to tell them of her frightening night of terror, but she was bewildered by their reactions.

"They laughed and told me that it will not take me a long time before I become accustomed to these raids," she said.

In fact, their estimations were right. "Just two weeks later, I was invited for lunch with a Palestinian family and there had been three raids. But this did not ruin my plan and I went to have lunch with that amazing family," she added.

Demir found it disappointing that Gazans had become so accustomed to Israeli bombardments, so much so that it had become an integral part of their lives.

"People of Gaza deserve to live in peace. It is unfair that they have been always subjected to atrocities and war crimes," Demir exclaimed.

During her spare time, Demir enjoys visiting one of Gaza's most iconic landmarks, the harbour. It helps her deal with homesickness.

"I am in love with Gaza's port. The refreshing breeze invigorates my body and reminds me of my days back at Diyarbakir." 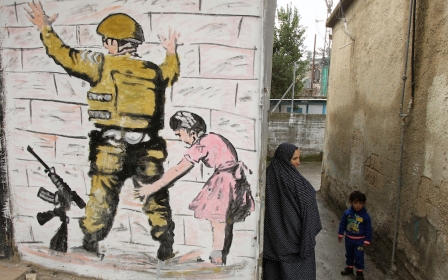