Of war and other demons: Tehran's anti-war exhibition

As the drumbeats of war are getting louder in the Middle East, Ali Akbar Sadeghi displays an anti-war exhibition in Tehran 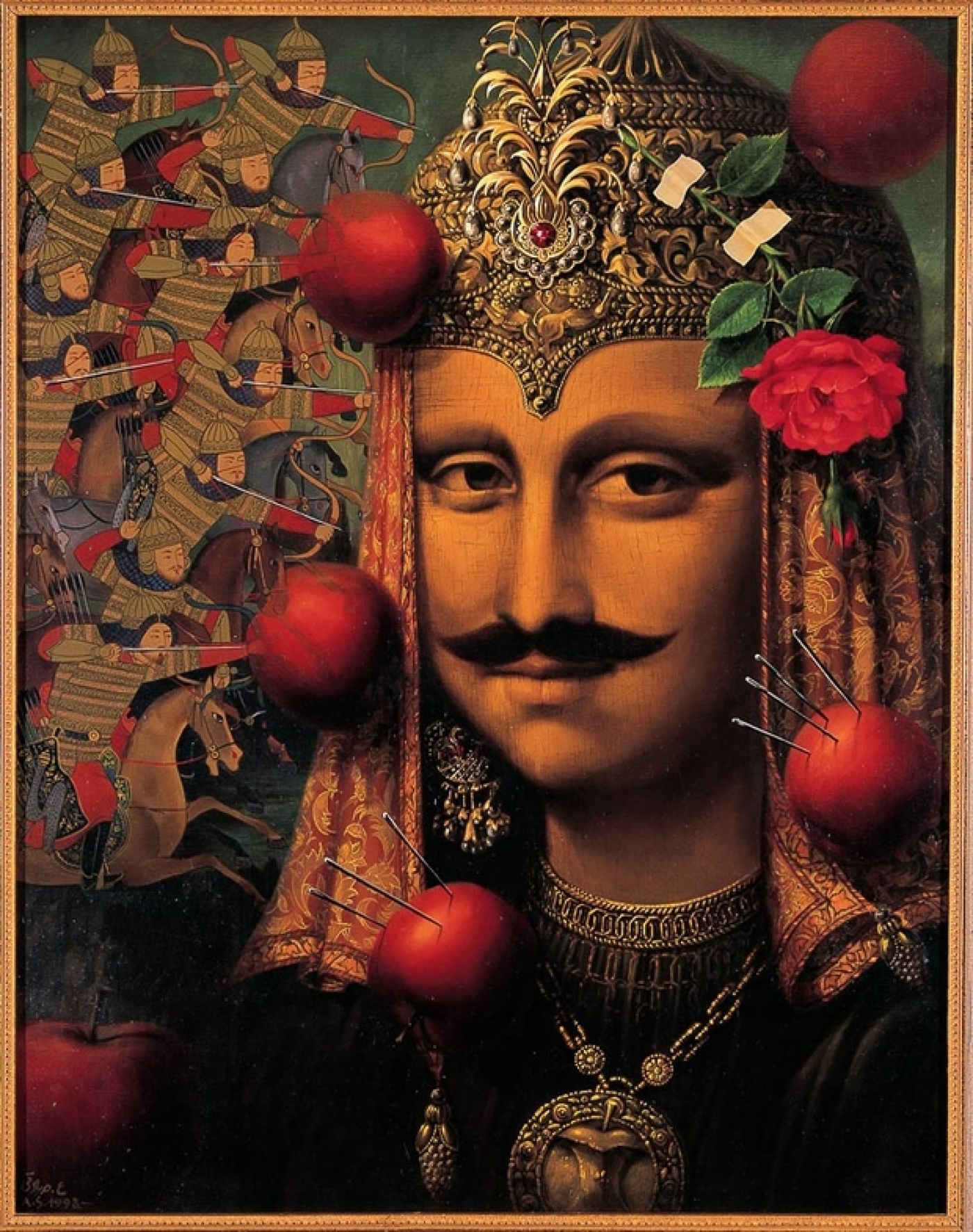 In Moustache (1981), Sadeghi created an imaginary world where Mona Lisa has a moustache and goes to war with Iranian miniature soldiers (Photo courtesy of Ali Akbar Sadeghi)
By
Changiz M. Varzi

TEHRAN -  Ali Akbar Sadeghi was only eight years old when his five-year-old brother, Ali Asghar, was diagnosed with typhoid fever, which spread through contaminated water and food in 1940s Iran.

“Ali Asghar lost a lot of weight, he was nothing but skin and bones,” Ali Akbar recalls. “Eventually he died. For years, my mother kept a piece of his clothing, and from time to time she smelled it."

That was Ali Akbar Sadeghi’s first encounter with death. Today, the 81-year-old is an internationally acclaimed painter, book illustrator, animator, and sculptor.

Sadeghi says that his younger brother's early death made him appreciate every moment of life. “That’s why I deeply suffer when I see images of current wars and bloodshed. I suffer because I appreciate the beauty of life.”

While power struggles are convulsing the Middle East, at a time when the drumbeats of war with Iran are getting louder, the Tehran Museum of Contemporary Art (TMOCA) launched a large exhibition of Sadeghi's works.

Since the 1970s, Sadeghi has been a key figure in the Iranian art scene. Having developed a unique painting style that combines symbolism, surrealism, Iranian teahouse painting techniques and Persian miniatures, he has won several international prizes for his animated movies and book illustrations.

In 1975, his short animated film The Rook won outstanding film of the year for presentation at the London Film Festival. The film is about a chess game, where all pieces are being captured. At the end of the game, the two kings are the final players left on the chessboard. They decide to restart the game and push other pieces into a new fight.

Since the beginning of his career, war and conflict have always been at the centre of Sadeghi’s artwork. Even during the 1970s, when US President Jimmy Carter dubbed Iran “an island of stability,” Sadeghi was creating anti-war animation movies.

Flower Storm, The Rook, and Seven Cities were his three award-winning animation movies condemning war-mongering world leaders. War is a global concept for Sadeghi, as old as life itself and not limited to a specific time.

“For Sadeghi, war and conflict are not concepts carrying unchanging moral values,” explains Adeleh Rafaei, a lecturer at Al-Zahra Art University in Tehran. “In his creations, war has plenty of contradictions in itself. In this intellectual way of looking at war, this concept can also be interpreted as a struggle that one person continues against the self.”

This complex view of good and evil is clearly depicted in Sadeghi’s most recent series of paintings entitled Demons. Painted with intense colours, his demons seem deeply human. In some paintings they look overjoyed, while in others they seem melancholic. In one piece of artwork, his demons are bound in chains and appear like they are being tortured.

“Human beings have always been engaged in struggles,” Sadeghi says. “As a baby you cry and fight to be breastfed. Later on, you fight for love, to make a living, to buy a house. Some also fight for a homeland, for a nation, or for a belief. And at the end, on your deathbed, you fight with the angel of death.

“But today’s fights are different. Nowadays, we see that young men and women explode themselves with bombs attached to their bodies.”

Sadeghi believes that those who carry out "terrorist attacks" are not the only ones who should be blamed for these “inhumane acts,” but “we, our society and our world are also responsible” for such incidents. According to Sadeghi, “the world and society have educated those extremists” in the wrong way, and “made terrorists out of those human beings”.

Sadeghi’s work not only focuses on civilian casualties and the ongoing humanitarian crises in the region, but also brings the ordinary soldiers being manipulated by the world's superpowers to the attention of his audience.

“Ali Akbar Sadeghi’s paintings are filled with warriors who hide their faces from the viewer’s gaze,” wrote Iranian art critic Amir Nasri in a Farsi article entitled The Hidden Face, published by the Ali Akbar Sadeghi Foundation in a catalogue about the artist’s work.

“A disguised face is one that lacks individual characteristics. It is a face that can belong to a group of people and not only one individual,” Nasri adds.

Sadeghi, by depicting these hidden faces, describes how people of different ethnic groups, religions and nations are being manipulated to wage war across the world.

“I quite often think of soldiers, and of what’s going on in their minds,” Sadeghi emphasises. “I keep asking myself what would happen if soldiers understood how they are being abused by the warlords.”

Although Sadeghi pities the soldiers who participate in wars, he does not forgive them for the bloodshed they have caused. In a series of paintings, nails are hammered into the faces of the soldiers portrayed.

In Sadeghi’s paintings, you can see a blend of rebellion and serenity

“In Sadeghi’s paintings, you can see a blend of rebellion and serenity,” explains Naser Fakouhi, an Iranian anthropologist and the president of Iran’s Anthropology and Culture Institute. “And these nailed portraits are one of the best examples of an artists’ calm rebellion.”

Fakouhi, who conducted hours of lengthy interviews with Sadeghi as a part of the “Cultural History of Modern Iran” research project, discovered that the Nails series was inspired by Sadeghi's childhood.

When Sadeghi was nine years old, his father sent him to a carpentry workshop to work as an assistant during the summer break. Back then, it was common for Iranian families to send their children to learn a trade during the holidays.

For a while, his job was to straighten crooked nails, and that was when he developed a love relationship with the nail

“For a while, his job was to straighten crooked nails, and that was when he developed a love relationship with the nail,” Fakouhi laughs. “A crooked nail is 'nothing' because it is useless. But when he straightened the nail, he transformed 'nothing' to 'a thing' which became a useful nail.”

Decades later, these nails appeared in Sadeghi’s paintings, installations and sculptures. In 2008, with pieces of wood and nails, he created several pots of cacti. At a retrospective of his work, two chairs are also displayed which are covered in nails.

“Several layers are distinguishable in Sadeghi’s artworks,” explains Fereshte Moosavi, an Iranian artist and a PhD candidate in the curatorial programme at Goldsmiths, University of London.

“Various components in his paintings declare that his art is not restricted only to his personal emotions and thoughts. Sadeghi illustrates the concerns of contemporary society, and awakens our collective consciousness.”

After over 65 years of creating art, when Sadeghi looks back at what he has added to this world, he considers himself an artist who has always tried to make his audience contemplate themselves and the world around them.

“Artists might not be able to change the world,” Sadeghi concludes. “But I want to make my audience think. I want them to think of what’s going on around them in the world, and of what they do as human beings.”