The write stuff: How ancient Arabic scripts are coming back to life

As calligraphy undergoes a 21st-century renaissance, devotees are putting in the time to learn the ancient kufic art. 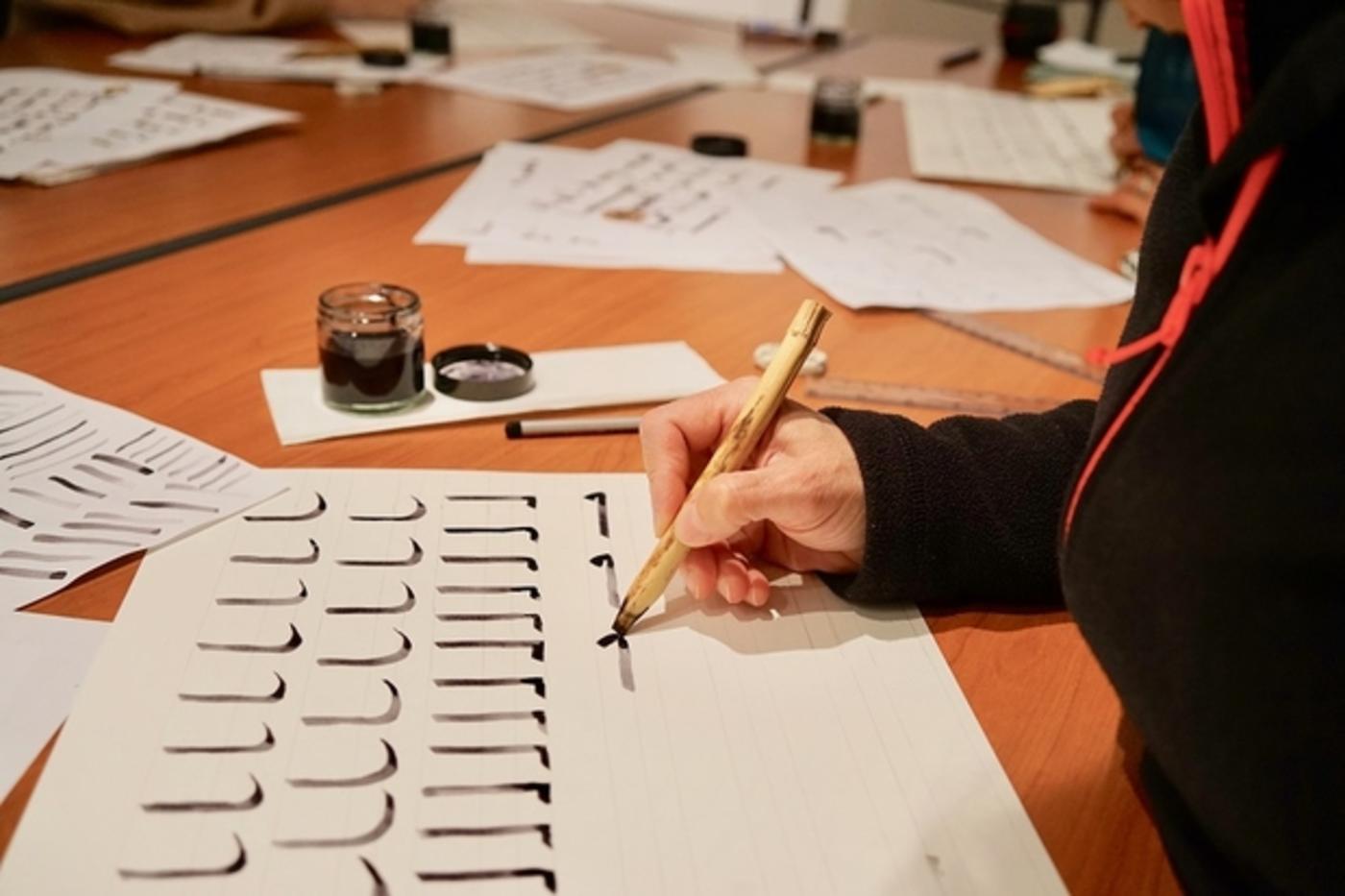 LONDON - Slowly shaping each letter with a bamboo tool dipped in plant-based ink, calligrapher Joumana Medlej finds a meditative calm amid the chaos of modern life.

"In this time of constant distraction, it reacquaints you with the practice of total focus," she says, as she writes in ancient kufic calligraphy, named after the city of Kufah in Iraq.

Kufic calligraphy first emerged at the end of the 7th century and reached its apogee under the powerful Abbasid dynasty, before its styles died out in the 13th century.

"It was part of their branding. They needed beautiful scripts to transmit their message," Medlej says.

The Beirut-born artist has been practicing kufic calligraphy since 2007. Her weekend course on manuscript kufic at the Arab British Centre in London sells out quickly. Iraqi-British student Hajir Ibraheim enrolled with a goal to master the style in one year.

"I need a hobby outside of work, otherwise I'm on my laptop all weekend," the 31-year-old medic says.

'In this time of constant distraction, it reacquaints you with the practice of total focus'

By the end of the lesson, Iraqi-British student Malaak al-Hammdany is feeling quietly confident. Growing up, calligraphy was displayed around her family home and now she wants to explore it as a way of connecting with Arabic culture.

"It's my language, I'd like to master it in different ways," she says.

These tapered with time as more florid forms became popular, and the simplicity of early styles gave way to the curves and flourishes of subsequent schools.

More than a millennium later, a new generation is bringing these ancient styles into the modern age as they explore their affiliation with the Arab world and find creative expression with centuries-old scripts.

"There's been a revival thanks to an uptake by younger people who might once have considered it a more traditional art form," says British artist Ruh al-Alam, whose calligraphy clients include Google, Sony and Netflix.

'It's my language, I'd like to master it in different ways'

Before launching Archetype, his studio in London, the 37-year-old studied under a calligraphy master in Egypt. But opportunities to learn locally are improving as aspiring calligraphers seek out classes in the UK.

In a polarised political climate, people are searching for something that reflects their identity, he says. "Even more secular Arabs or Muslims, who would previously have seen calligraphy as purely religious, have embraced it."

Curating exhibitions in the UAE, Indian Canadian artist Fathima Mohiuddin observes how Arabic calligraphy is being used to create contemporary art that's specific to the region. "It's heritage and history meets technology and modern-day dialogue," she says.

The work of Mohiuddin, who was born and raised in Dubai, draws subconsciously on the tradition. It can be seen in the dots on the wings of the falcon that's currently her Facebook profile picture; or how the lines are tapered to articulate space in the boisterous collages she emblazons across buildings.

Calligraphy, she says, has become a way of connecting local art movements to the global scene and showcasing the riches of Islamic culture to an international crowd.

Beauty in the eyes of the beholder

The early Kufic inscriptions, which are immortalised on Islam's oldest standing monument at the Dome of the Rock in Jerusalem,  date back to 692and were made consciously beautiful to be worthy of the message they conveyed.

A hammered copper plaque from the north gate of the Dome copies passages from the Quran that emphasises the oneness of God. But readability didn't matter, Medlej says. This is a "purely spiritual script" - it's enough just to look at it, but not all types of Arabic calligraphy are religious.

New styles of proportional cursive scripts, like naksh and thuluth calligraphy, emerged in the 10th century. These styles were smooth and fast-flowing, easier to read and quicker to inscribe than the long, angular letterforms of early Kufic, which died in the 13th century.

There's no practical purpose to learning a style so long out of use, and it can take two or three hours just to write a single page - but that, Medlej explains, is part of the appeal. "It's not about achievement or accomplishing anything; you just sink into the practice."

In the class, phones are switched off and put away. Absolute focus is required for this immersive art form which rewards patience and perseverance.

Time to slow down

One special quality of Arabic calligraphy is the relationship between letters and the creative scope this affords. Ink pots, lined with raw silk to regulate the flow of the liquid, must be kept close for a fresh dip between each stroke, which is made using a pen cut from bamboo or reed with a slanted nib.

Jihad Mikati, who is based in Tripoli, Lebanon, teaches three of the six overarching scripts, including naksh (for manuscripts, ceramics and tiles) and riqa' (for letters, edicts and manuscripts), to students at Al-Azm Technical Institute.

He estimates that "there are nearing a hundred different forms if you factor in lesser-known styles".

Some of the cursive varieties take many years to master. Samiur Rahman, 27, who manages the House of Calligraphy in east London, remembers being stuck for three months on the letter "jeem" at school and watching his other classmates drop out one by one.

"We live in an age where we can get everything with the click of our fingers – people want things very quickly," he says.

But the opposite is also true as the need to reconnect with something tangible and touchable persuades people to restore a bit of analogue reality to their lives.

Calligraphy, particularly Arabic scripts which arguably take the longest to inscribe, has a unique appeal to those nostalgic for the feel of pen and paper.

Rahman recently took part in a 90-minute calligraphy session for A Brush with Silence, an upcoming BBC documentary called that brought together 18 artists representing different cultures from around the world.

He noticed that others filled several sheets in the time it took him to write half a page - but with Arabic calligraphy "you're forced to go slow".

Antique Qurans on display in the British Library convey the stylistic breadth of the Arabic schools. One 13th-century volume, its pages purple-spotted with age, features a distinctive type of calligraphy known as maghribi, which emerged in Morocco or Spain, when the latter was under Islamic rule.

Next to it, the lavishly illuminated Sultan Baybars’ Quran is handwritten in an excitable thuluth that leaps over the lines beneath chapter headings drawn in a more composed kufic.

A gold border on the richly adorned title page looks a little frayed, and the manuscript is marbled with age, but there's still no questioning the wealth and prestige of the Mamluk royal who commissioned this Quran in 14th-century Cairo.

Incorporating the older script would probably have added an air of authority, explains Daniel Lowe, curator of Arabic collections at the British Library.

A further six volumes are housed below in one of four basements that store the British Library's 15,000-piece Arabic manuscript collection.

The 8th-century Ma’il Quran, one of the oldest in the world, is down there alongside poetic works and calligraphic albums that showcased the leading calligraphers of the day.

Typically, it's academics who call these items up to the reading rooms, but sometimes artists will come seeking inspiration from calligraphers of the past.

"Our manuscript collection is a repository for the history of Arabic writing," says Lowe, who wants to promote wider creative engagement and give these ancient treasures a fresh lease of life via media that resonate with 21st century audiences.

The collection runs right up to the 19th century, mapping the enormous range of regional variations that makes Arabic the most diverse of the calligraphic traditions.

After that, it's up to future generations to draw on these riches and nurture a new era of creativity that inspires the next phase of evolution and determines the shape of Arabic scripts in years to come. 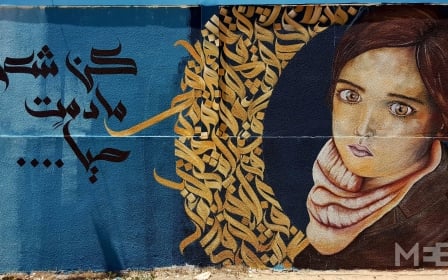 Culture
Calligraffiti artist transforms the streets and alleyways of Gaza