The young Syrian 'Queen of colours'

In a world of scarred landscapes, still life and portraits, eight-year-old Syrian artist Maria Barghouthy is already making a name for herself 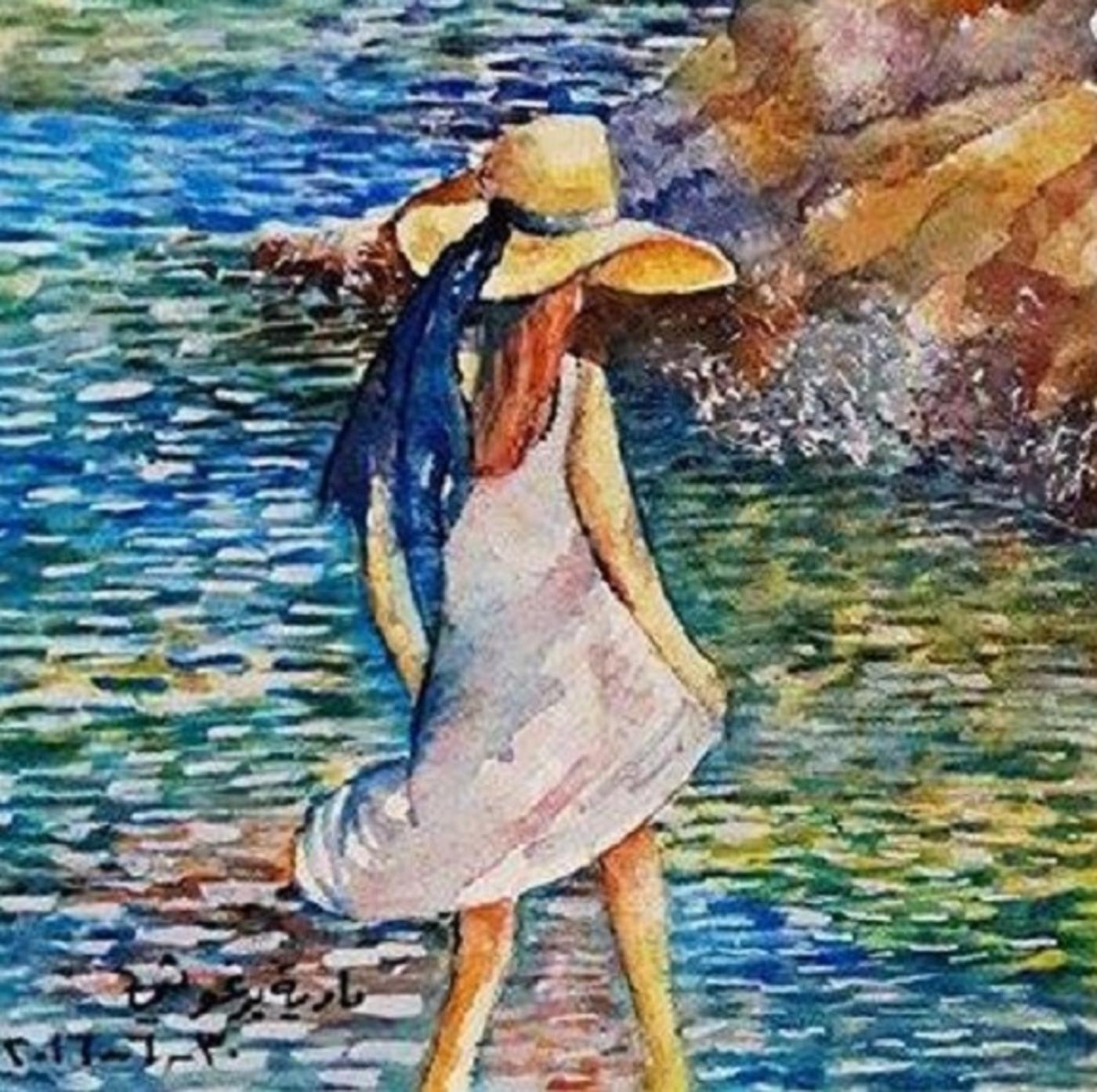 AMMAN - Maria does not remember a time when her country was not at war; she was only three years-old when the Syrian war started. When asked if she knows what war means, Maria draws a blank. After a few moments she says: "It's what happens when people don't like each other."

Maria Barghouthy is a talented Syrian artist who is "eight-and-a-half years-old," she announces proudly and with a huge smile during a Skype call with Middle East Eye.

While bombs decimate a local neighbourhood and the latest reports come in of children being buried under rubble, life is a little more secure for the young artist. She sits in her bedroom with a paintbrush in hand, her watercolours unable to extinguish the burning fires in Aleppo that are less than five hours from her Damascus home.

Her artwork stirs up emotions and paints a picture of what it is like to be a kid in a war-ravaged country. Her light brushstrokes are heavy with meaning to those who understand the world that surrounds her.

Facebook users comment on a photo of Maria Barghouthy's artwork uploaded onto her Facebook page. They try to decipher what Maria was trying to capture. "I think she's sewing our wounded homeland after it was ripped apart. They destroyed its beauty and heritage, killed its sons and displaced its families." Some commenters speculate that her art might be an effort by the child to fix their broken hearts.

With determination, Maria picked up her coloured pencils when she was just six-years-old, having been encouraged by watching her own father paint.

“I used to watch my dad draw all the time and decided to imitate him. One day he came back from work and I surprised him with a drawing that I’d been working on and he loved it,” she said with her sparkling eyes. “Baba gives me comments sometimes so that I learn from my mistakes and do not repeat them in my other works.”

Her father Bassem al-Barghouthy, Professor of Architecture at the University of Damascus, prefers keeping Maria away from watching the news. He says where they currently live is moderately safer than where some of their relatives reside, so Maria only hears what she calls "distant noises" of air strikes.

Bassem believes they are very lucky to still be able to acquire art supplies for her use, given the circumstances of war.

It has proven difficult to postpone the conversation about war. However, Maria’s schoolteachers and classmates often discuss the topic "superficially," according to her father.

Unlike many children her age in neighbouring cities and those who have had to flee the fighting, school is still an option for Maria. She enjoys studying and seeing her friends, and loves her science and art classes. When asked what her favourite part about science is, she said cheekily: “The teacher always singles me out of the class and asks me to draw the human organs in preparation for her lesson instead of doing it herself. That’s why I like it!”

Online Maria is getting her fair share of accolades. Dubbed by some as "The Queen of Colours" with "magical hands" and "fingers made of gold," many fans send her love, encouragement and constructive feedback every time she posts a painting. "To the gifted child Maria, I follow your work with passion, you have a great future ahead of you," one of her Facebook supporters wrote. "We continue to be dazzled and inspired by this great talent," another added, "there are no longer enough words to describe your art."

Inspired by the old masters

Her artwork includes subjects such as natural landscapes, still life and portraits. The big, brown-eyed girl also experiments with colours and styles and elegantly shifts from one school of art to another. Maria recently started working with watercolours, which she says she enjoys the most. Her technique is to draw a sketch of whatever she feels like drawing that day, then she colours it in.

“I enjoy drawing landscapes as much as I enjoy drawing people and figures, but I especially love painting the sea, even though it’s been so long since I last visited the beach – I don’t even remember it,” she said.

She often uses her uncles, aunts and friends of the family as subjects, depicting each one with a different style. “Sometimes her paintings almost look like caricatures, sometimes abstract-like, with a hint of Picasso’s style,” Bassem said.

As part of her studies she has reproduced work by Hans Purrmann, Van Gogh’s Peasant Woman and Portrait of Armand Roulin, Amedeo Modigliani’s Portrait of Jeanne Hebuterne with a hat and necklace, and Louay Kayyali’s Shoe-Polisher, among many others.

According to her mother, Maria does not really follow the works of artists because of their names, but rather searches the internet with the help of her parents and decides which artworks she wants to draw - and they just happen to usually be by Van Gogh and Picasso.

Her father directs her at times, urging her to explore new themes and new techniques, and has been introducing her to works by Syrian and Palestinian pioneers in art.

“I like to draw works by Louay Kayyali, Ismail Shammout and Mamdouh Kashlan,” she added. “I enjoy copying their works.”

Maria, however, does not like to create exact replicas of other artists’ works. She interprets the works with her personal style and often prefers to add her own elements to paintings, changing colours and techniques. Other times, she draws inspiration from other artists’ famous subjects, like Van Gogh’s sunflowers.

That does not limit her from exploring her own imagination and drawing inspiration from the inescapable topic that surrounds her life in Syria. Her face beaming with innocence, she lifts one of her latest works up to the Skype camera. “This is a woman with her child at a refugee camp. She is sad because she had to leave her house.”

Her characters’ facial expressions are vivid, symbolic of the 6.5 million internally displaced Syrians and 4.8 million refugees who have fled the country since the outbreak of the war in 2011.

In a series of email exchanges, Dr Saad AlKassem, a Syrian-based visual artist and art critic, expressed his certainty that Maria is a talented child with skills beyond her age after having seen Maria's work on Facebook.

“There isn’t the slightest doubt that Maria is technically and artistically advanced, especially for a girl her age,” he said. “She has clearly developed an advanced sense of colour and correct application.”

AlKassem, president of the Researchers and Critics Association in Syria, and former director of the Syrian Satellite Channel, added: “Although it is good for learning the techniques of drawing, I encourage her to steer away from copying other artists and to start creating her own independent character and style – which I have no doubt she will establish soon.”

Maria’s talent is being recognised in wider circles with her works shown at various exhibitions in the last two years. Her art has been shown in Italy, where she exhibited in Milan as part of a fundraising campaign for Gazan children. Organised by the Al-Qalam Association, it aims to develop education initiatives for Palestinians around the world.
According to her parents, the dean of the Faculty of Architecture at the University of Damascus encouraged her to participate in an auction at the faculty to raise money for children of those killed during the war earlier this year. She has also recently participated in an online art competition for children and won first place.

Maria leads a relatively normal life for a child living in war. When she is not drawing, she watches the Arabic cartoon channel Spacetoon, helps her mother out in the kitchen, or plays with her friends in a nearby playground.

Maria is shy and finds it a bit difficult to express herself in words, something she does not need when she is drawing. Though she is still unsure of what she wants to be when she grows up, as she puts it, she still has “a lot of time to think about it and decide; it’s too early now”.

Meanwhile, her future career options fluctuate between scientist, an architect "like daddy," or being a famous artist. Maria’s dreams know no boundaries, regardless of the circumstances that surround her. 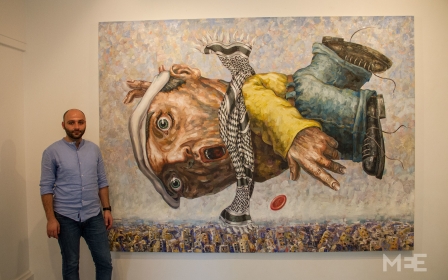 Culture
'Cairo is my muse': Artist peels back the layers of the city she loves 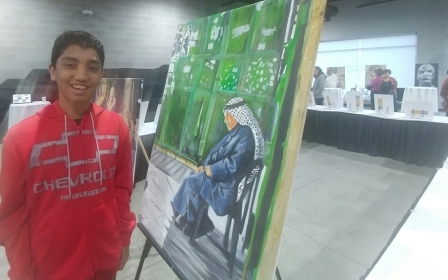