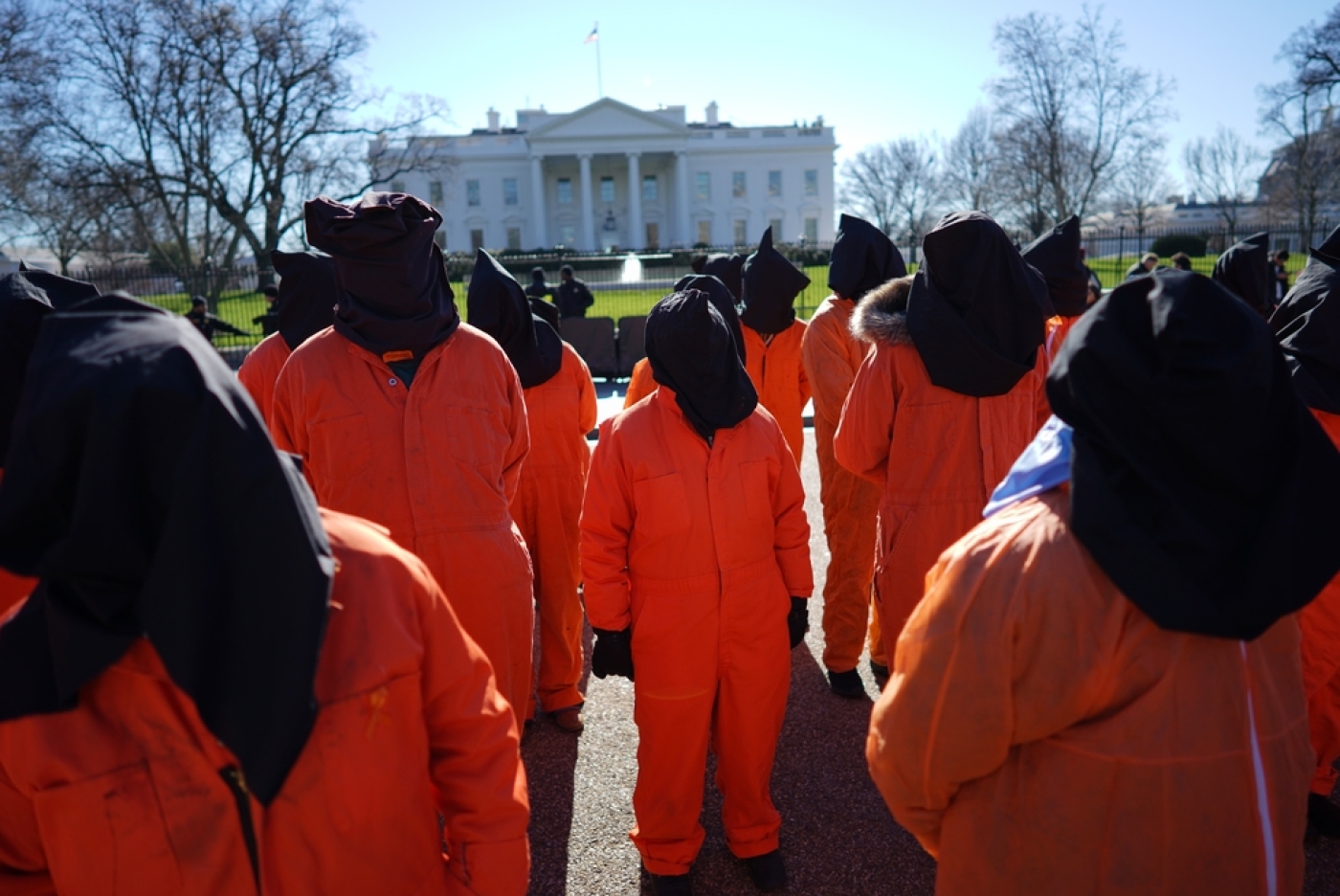 Demonstrators take part in a protest calling for the closure of the Guantanamo Bay prison on 11 January, 2016 in front of the White House in Washington, DC (AFP)
By
MEE and agencies

Ten former inmates at the US detention centre in Guantanamo Bay arrived in Oman on Thursday for a "temporary stay" as Washington vies to close the notorious prison, Muscat's foreign ministry said.

Oman has received the men "in response to a request by the US administration for help to resolve the issue of detainees at Guantanamo Bay," the ministry said in a statement carried by state news agency ONA.

The statement did not give further details.

The United States has been working to repatriate inmates from the Guantanamo facility, located at a US naval base on the southeastern tip of Cuba.

The Guantanamo population has dwindled from its peak of more than 700 to less than 100 now. Prisoners no longer deemed a risk have either been repatriated or sent to a host country.

Another former Guantanamo inmate was repatriated this week to Saudi Arabia, where he was to join the kingdom's programme to rehabilitate militants.

On 9 January, the last Kuwaiti prisoner at Guantanamo Bay returned home to a family reception after 14 years of detention.

And in November, the Pentagon said that the United States had transferred five detainees from Guantanamo Bay to the United Arab Emirates.

More than 40 of the remaining inmates have been approved for transfer, and the Pentagon is trying to find countries to take them.

Many are from Yemen - homeland to what the United States describes as the deadliest branch of Al-Qaeda - and cannot go back given the country's collapse into civil war.

US President Barack Obama has vowed to push ahead with plans to close the prison, despite evidence that a substantial number of former detainees have rejoined militant groups.

Obama came to office in 2009 vowing to shutter the facility, which opened under his predecessor George W. Bush to hold suspects after the 11 September 2001 attacks and became known for harsh interrogation techniques that some have said amounted to torture.

Inmates were called "enemy combatants" and denied standard US legal rights, meaning many were held for years without charge or trial. A number of prisoners died while in detention, while many complained of being tortured.

Some figures have estimated that up to 30 percent of released detainees return to militant groups with the aim of carrying out attacks on Western targets.

In his final State of the Union address on Tuesday, Obama again urged Congress to help him close the detention facility.

"It's expensive, it's unnecessary and it only serves as a recruitment brochure for our enemies," he said.

Shaker Aamer, a British citizen held in Guantanamo Bay for 14 years, told Middle East Eye - following his return to the UK in November 2015 - that there was an urgent need for the American people to push for the closure of the camp.

"They need to stand up for that, they need to stand up to come out and help to close that place," he said. "That place is built on the concept of how to destroy a human being. From ever perspective you would ever think - spiritually, physically, mentally. So you struggle with every little thing."

He also criticised the decision of the US not to send detainees back to their home countries.

"America is so keen to send people far away from their countries, far away from the region where they live," he said. "They sent a few people to Ghana, in the middle of Africa, they sent two brothers - their families live in Mecca!"