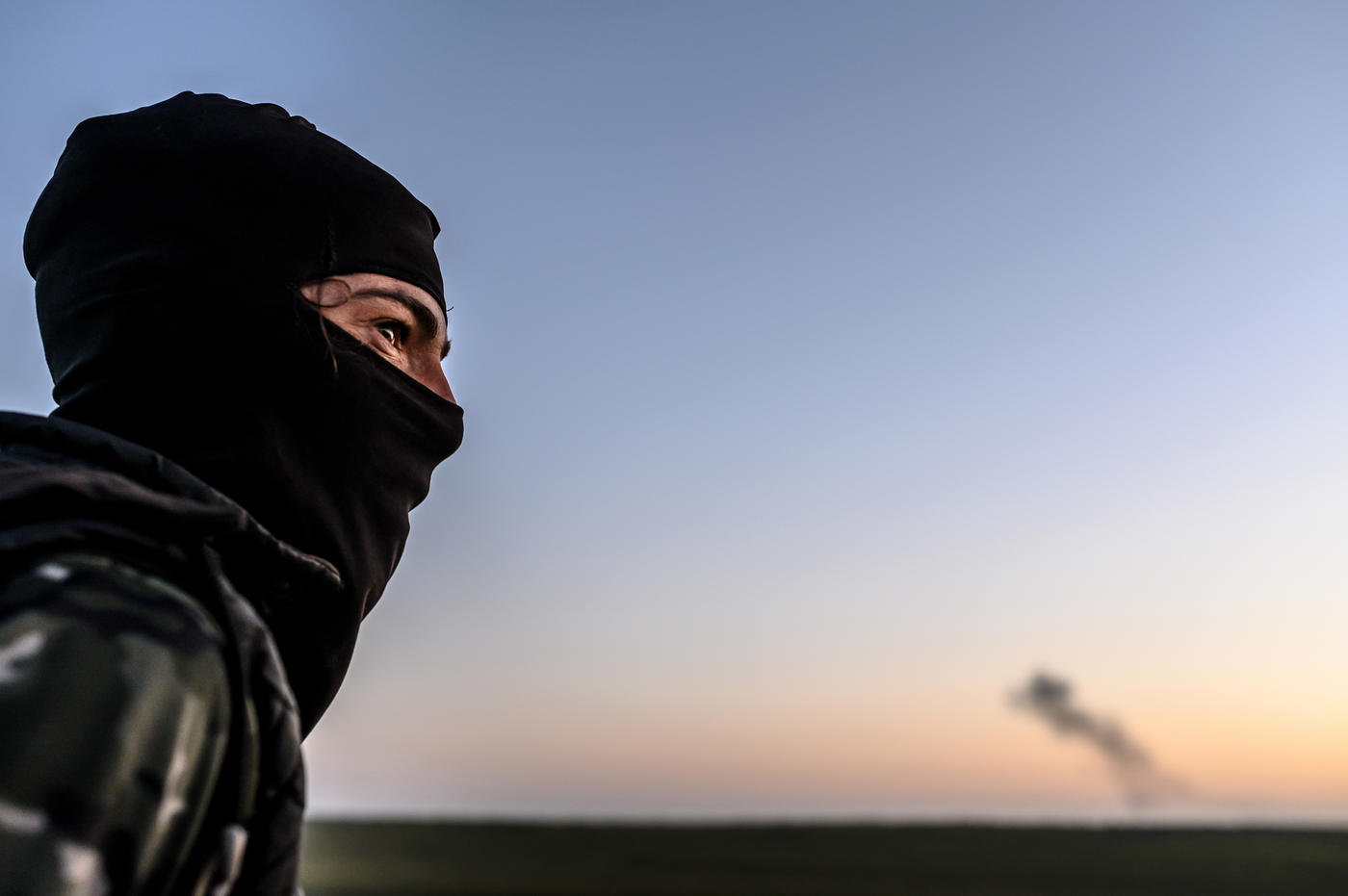 An SDF fighter looks towards Baghouz on 19 February, 2019.
By
MEE and agencies

At least 20 people have been killed in a car bombing close to a base being used by Syrian Democratic Forces (SDF) fighters battling Islamic State (IS) group militants in eastern Syria, according to a Syrian opposition monitoring group.

The dead included 14 oil workers and six fighters with the Kurdish-led SDF, the UK-based Syrian Observatory for Human Rights said.

The attack occurred in the village of Shheel, close to an oil field being used by the SDF as a base for its expected assault on Baghouz, where the last remaining IS fighters are expected making a stand after a months-long campaign that has reduced the territory they hold to a single village.

On Thursday, the SDF handed over more than 150 Iraqi and other foreign Islamic State (IS) fighters, who were transported with their families on 10 trucks, to Iraq.

The handover was the first of several under an agreement brokered to handover a total of 502 fighters, two Iraqi military sources told the Reuters news agency.

"The majority of the fighters are Iraqi," said a military colonel whose unit is stationed at the Syrian border. "But we have a few foreigners."

"Early this morning, 10 trucks loaded with Daesh fighters and their families were handed over by SDF forces to the Iraqi army," Mahallawi said, using the Arabic acronym for IS.

"The majority of them are Iraqis and the convoy was under maximum security protection headed to the Jazeera and Badiya military headquarters," the mayor said. Both bases are located in Anbar province.

In October, Human Rights Watch said US forces had been handing over suspected members of IS captured in Syria to authorities in Iraq, where it said they faced torture and botched trials. The New York-based organisation said the US had transferred suspected members of IS for trials in Baghdad, some of which had already taken place.

"Prosecuting [IS] suspects is crucial for their countless victims to obtain justice, but that won't be achieved by transferring detainees to abusive situations," HRW's Nadim Houry said.

"The US should not be transferring IS suspects from Syria to Iraq or elsewhere if they will be at risk of torture or an unfair trial."

Thursday's handover came as US-backed forces were readying for an assault on IS's final enclave in eastern Syria.

The last civilians are expected to be evacuated on Thursday, to clear the way for the assault, the SDF said.

About 800 foreign fighters who joined IS, including many Iraqis, are being held in Syria by the SDF, the group said.

More than 2,000 family members are also in camps, with dozens more arriving each day.

Their fate has become more pressing in recent days as the SDF planned its assault to capture the last remnants of the group's territory, a less than half a square kilometre area in the village of Baghouz.

"Coalition forces, to include the US, continue to support the SDF as they negotiate having innocent civilians released and their fighters returned with the inevitable defeat in Baghouz," coalition spokesman Sean Ryan told the AFP news agency.

Save the Children said on Thursday that there were more than 2,500 children from more more than 30 countries living in three camps in northeastern Syria set up for people formerly living in IS-held territory.

At least 38 are unaccompanied and some of the infants are just days old, the charity said, urging countries to take action to ensure the safety of the children.

“All children with perceived and actual associations with ISIS are victims of the conflict and must be treated as such. All states whose nationals are trapped in Syria must take responsibility for their citizens," said Sonia Khush, Save the Children’s Syria Response Director.

“Like millions of Syrian children, they have lived through conflict, bombardment and acute deprivation. They need specialised help to recover from their experiences and return to normality, together with their families. This is impossible in overwhelmed displacement camps in a volatile war zone. The international community must act now before it is too late.”

According to United Nations figures, at least 50 children have died since the start of the year fleeing the SDF offensive or after arriving in displacement camps.

Many living in IS-held areas had lacked access to adequate medical care or food supplies for months or even years, Save the Children said.