It's been a bad week, so we thought you deserve some good news. Here's 9 inspiring reactions to Trump's win that will make everything better (@Mlsif/Twitter)
By
Charles B. Anthony

1. Students form protective wall around praying Muslims, after female student wearing a hijab was threatened with being set on fire

“We must stand with our fellow Americans who may be singled out for how they look, where they’re from, who they love or how they pray… As Jews we know what it means to be forced to register…  I pledge to you right here and now that if one day in these United States, if one day Muslim Americans will be forced to register their identities, then that is the day that this proud Jew will register as Muslim.”

4 And Trevor Noah asks every Amercian to do the same

“When you think about what Trump has said about Muslims over the past two years, giving him a Muslim registry seems like a dangerous idea. You wouldn’t give Jared [Fogle] a list of all the playgrounds.”

5. Chicago mayor pledges to make Chicago a sanctuary for immigrants threatened with deportation

"To all the children and all the families who are unsure of their place because of what happened Tuesday, you are safe, you are secure and you are supported in the city of Chicago."

6. Jewish scholars of holocaust history call on Americans to “mobilise in solidarity” against Trump

"You are not alone. We are with you"

“Plan, and get ready” 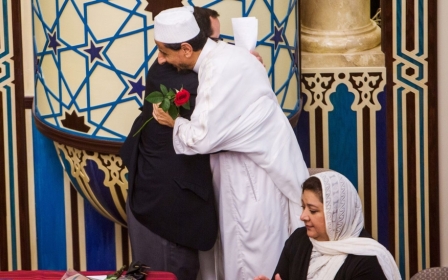 USA 2016
US Jewish and Muslim associations unite to combat bigotry