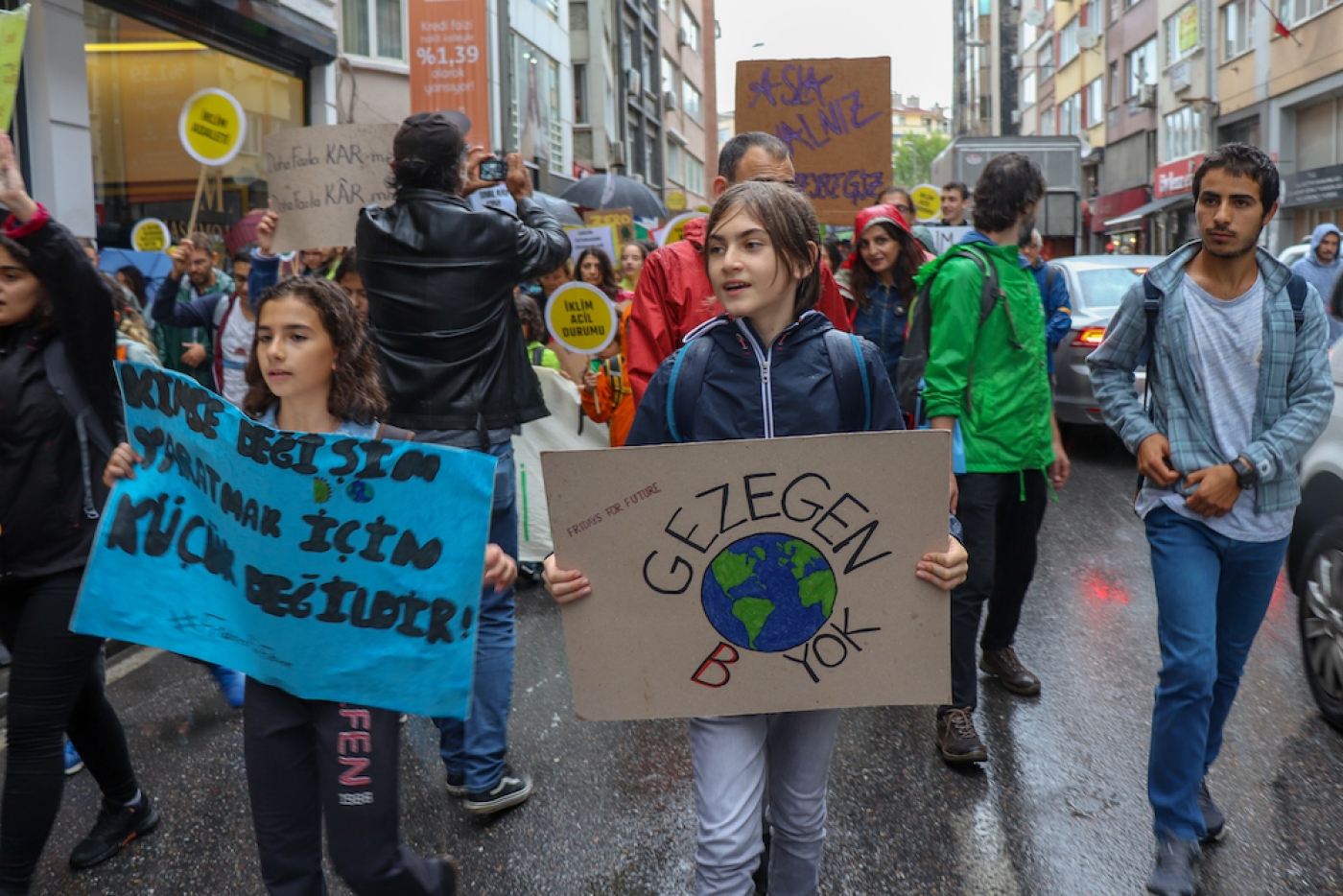 On a typical rainy day in Istanbul, yellow taxis and delivery truck drivers zoom down the empty streets as residents try to stay dry indoors.

But on this drizzly Friday, the streets of a district of Istanbul were briefly taken over by a march of hundreds of raincoat-clad children and adults, sloshing through puddles and chanting for climate justice, renewable energy, and systemic change.

The protest, one of the country's largest in recent years on the issue of climate change, comes on the heels of a summer in Turkey that saw many extreme weather events, from weekly reports of forest fires to extensive flooding in several Turkish cities.

Activists said that Friday's strike represented a "new wave" of climate activism in the country as groups come together across generations and the movement receives a boost from young activists.

Originally slated to be a rally and press announcement in a small square in Istanbul's Kadikoy district, so many showed up that the gathering quickly turned into a march down the street, rain falling all the while. Shopkeepers stood outside to watch the more than a thousand-strong group as it forced the road to close to cars along the way, led by children at the front of the march holding a sign that read "Unite Behind the Science".

Irmak Yelok, 20, is an architecture student at a local university who attended the protest along with friends from her programme. She said a class they took on ethics made them realise that, "to make architecture, to do architecture, we have to think about climate and the environment. That's why we're here today."

She and her friend Kevser Aksoy said they were also moved to participate due to recent Istanbul megaprojects such as a new bridge across the Bosphorus and a new airport, slated to be one of the largest in the world. Both projects were heavily criticised by environmentalists for their location in the forested area north of the city.

"The biggest example I can give is the third bridge. For that, so many trees were cut," says Yelok.

Yelok's classmate Kevser Aksoy jumped in and added: "These days, with social media, people are becoming more comfortable - they're standing for ideas. I think that's a great step for us, for Turkey."

She said people on her social media feeds were talking about the climate. "I think people are getting informed that way," Aksoy said.

Both said the leader of Fridays for Future also motivated her and her friends.

"We also follow Greta Thunberg. She also really inspired us to come here too," Yelok said, referring to the 16-year-old Swedish climate activist who has been at the forefront of recent climate-change protests.

"She's doing an amazing thing, announcing to the world about this."

Umit Sahin, the Climate Studies Coordinator for the Istanbul Policy Center, a policy research institute, said that the participation of children and young people in the climate movement in Turkey had been groundbreaking.

He said that while the climate movement has been active in Turkey for roughly the past 15 years - since activists pushed Turkey to ratify the Kyoto Protocol - Friday's protest and two Fridays for Future protests last spring represented a new phase in the movement.

Before this year, the most recent large gathering was a climate forum in 2015 as activists urged Turkey to sign the Paris agreement. Starting in summer 2015, Turkey experienced an uptick in political violence, and measures such as the government's state of emergency restricted most public gatherings, including environmental protests.

"But thanks to Greta, in the last year, everything changed," Sahin said. He said the Fridays for Future movement in Turkey, along with Turkey's wing of the climate group Extinction Rebellion, had breathed new life into the environmental movement, and that there is now talk of starting a new Green Party in Turkey.

"I'm calling it the new wave of the climate movement," he said.

Ozge Doruk, 25, one of the organisers of the protest, was excited because Friday's events took place as part of a new climate change organisation called Zero Future, which combined over a dozen disparate environmental groups under one umbrella platform.

She works on climate activism full-time, and currently is with a local NGO in Turkey's northwestern Ida Mountains, helping locals oppose the opening of a gold mine in the area.

She says one of the movement's main goals right now is to help the public realise the connection between extreme weather events and climate change. According to a recent poll by Turkey-based Konda Research, 71 percent of respondents thought that "floods, storms, extreme heat and drought" have increased in the past few years, but only 52 percent thought that Turkey was currently experiencing the effects of climate change.

Just this past summer in Turkey, hundreds of forest fires raged across the country, and flash floods turned Istanbul's historic streets into fast-moving rapids on 17 August. On 18 July, severe flooding in Turkey's northwestern city of Duzce killed 5 people.

Levent Kurmaz, physics professor and director of Bogazici University's Center for Climate Change and Policy Studies, points out that the current floods are due to larger changes in rain patterns in Turkey caused by climate change.

"We are getting different precipitation regimes, where we have a drought for three, four weeks, and then it pours. And when it pours combined with insufficient structures, we have lots of floods everywhere in Turkey."

"We need to make this connection, then we can act. We have to say this. We have to do something about this."

The Turkish government has recently adopted a handful of new environmental policies, among them a tax of 25 kurus (.03 GBP) on plastic bags that came into effect on 1 January. Istanbul's previous government also released a Climate Change Action Plan last year outlining the need to reduce emissions and prepare for climate change's effects on the city.

But activists say that small changes such as plastic-bag taxes and recycling programmes are not enough, pointing to the need for more education about why plastic is being taxed in the first place. Activists like Doruk say they are also focusing on encouraging Turkey to ratify the Paris agreement.

Turkey has signed the UN agreement, but they are one of the few countries in the world that have not ratified it. The Turkish government says Turkey is improperly classified in the agreement as a developed country, and that this misclassification will lead to Turkey being barred from international climate credit that could help Turkey with a transition to a greener economy.

This year, Turkey's lead negotiator for the Paris agreement emphasised that Turkey was looking to the future and is looking to diversify its energy production.

"The fight against climate change will continue, and our priority will be renewable energy," said Mehmet Emin Birpinar, Turkey's Deputy Environment and Urbanization Minister, in an interview earlier this year.

Experts say that climate change will especially impact agriculture in Turkey. Kurnaz says that, due to warming, Turkey's rivers such as the Tigris and Euphrates are receiving less surface water from melted snow and more sudden downpours that can result in flooding.

Right now the extensive dam systems on most rivers are preventing shortages, but Kurnaz says the increased frequency of droughts and floods in the future will heavily impact agriculture.

Sahin said that because part of Turkey is in the Mediterranean region, precipitation will decrease in the future.

"Temperatures are going up in Turkey - Turkey's average temperature increased 1.5 degrees in the last century. That's 50% more than the global average, which is one degree."

Another worry for the future is sea levels - a 2016 study found that Istanbul and Izmir, two of the country's largest metropolitan areas, are ranked first and third respectively when it comes to possible negative economic impacts from sea-level rises in Europe.

Both noted that there are worst-case scenarios when it comes to the impact on Turkey. Sahin mentioned the possibility that half of Turkey could become subtropical due to climate change, causing large-scale desertification. Kurnaz cited a recent French study that said the UN's climate change reports underestimate the planet's warming mechanisms, and that the globe could heat as much as seven degrees if changes are not made.

"Business-as-usual will bring us to seven degrees, or eight degrees, or 12 degrees at the moment," Kurnaz said. In this scenario, "basically, when you go to the central part of Turkey, there's no agriculture there".

But Kurnaz also said that there are many ways to adapt, including transitioning Turkey's economy to renewable resources such as solar and wind. Sahin also emphasised all the different actions that can be taken.

"What we need from the grassroots is to push Turkey for more meaningful climate policies, phasing out coal power plants in the near future, increasing the share of renewables, and investing more in non-motorized and public transport," he said.

"Turkey needs to be pushed from the streets to accept that there is a climate emergency."

Those attending the protest on Friday made similar demands through their chants, repeating: "Sun, wind, that's enough for us!” and "We're here, we're yelling: 'We want climate justice!'."

The march ended at a local park, where a stage was being prepared for live music and booths for various environmental groups shielded people from the rain.

When asked about whether she thinks awareness of climate change is growing in Turkey or not, Yoruk said it was not just social media and protests that were spreading the message, but that she and her friends are talking with their families too.

"Our mom, our grandmoms, they're also getting to know about this because we share with them," she said.

"Maybe the government doesn't care, maybe the news isn't showing them, but we are informing them. We are trying to inform them." 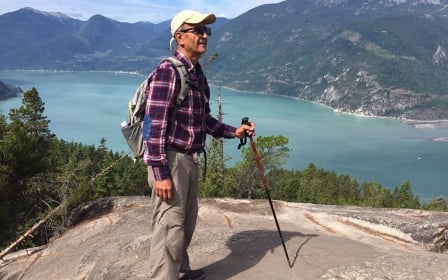