Al-Hol camp: Amid hellish conditions, IS wives say they are ready to go home

At al-Hol, where there is not enough water, toilets or shade, regular fights break out among residents. Wives of IS fighters tell MEE they want out 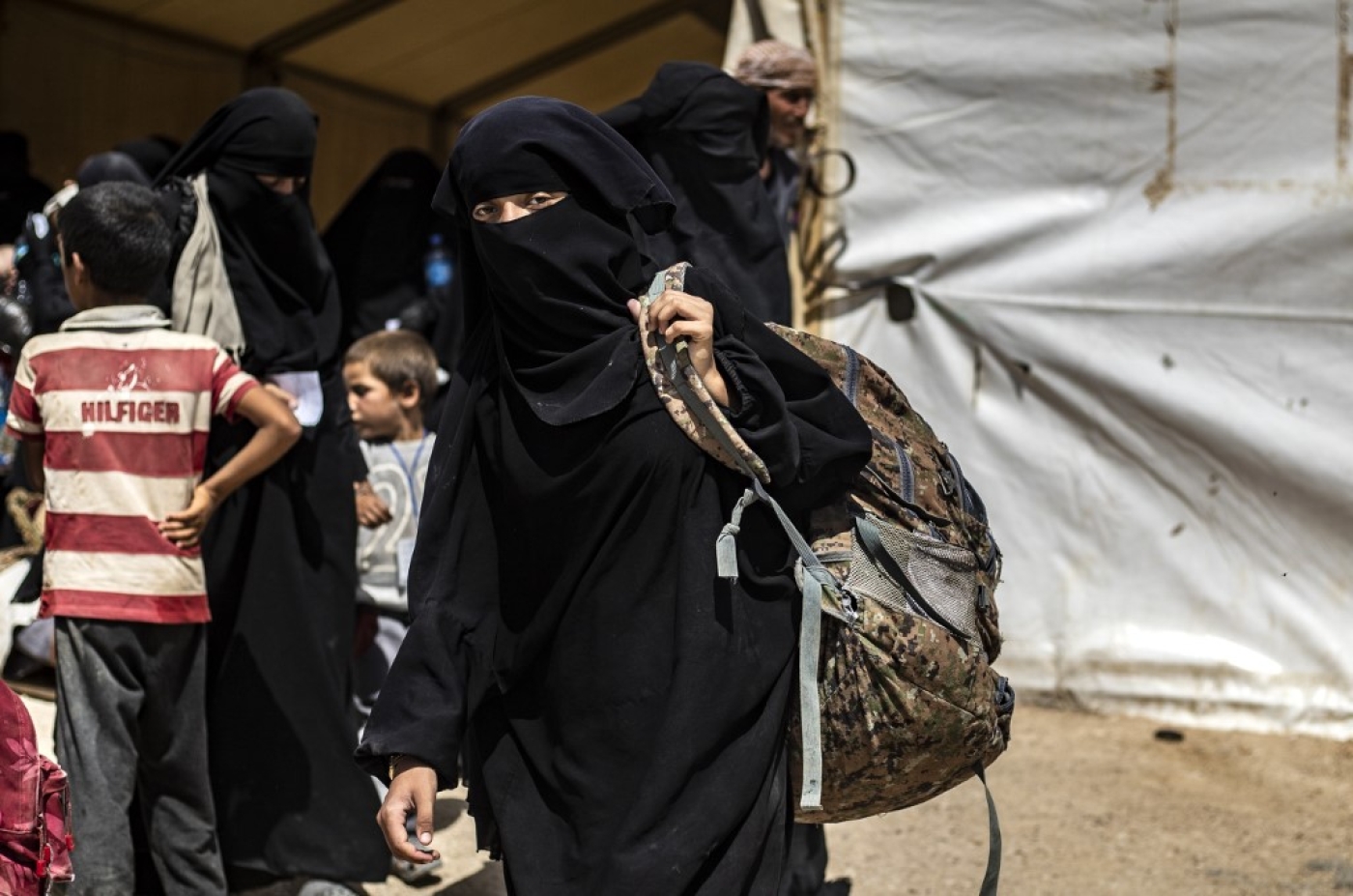 A woman carries a bag containing her belongings at the al-Hol camp in northeastern Syria (AFP)
By
Adam Lucente
in
al-Hol, Syria

As they waged war across Iraq and then Syria, Islamic State fighters sought to establish a self-described caliphate that would render the modern borders of the Middle East, drawn after the First World War, irrelevant.

'The Syrians were telling the Iraqis: 'You came to our area and brought IS. You are the problem''

But in the sprawling camp in northern Syria where the wives and children of IS fighters now live alongside people displaced in the fighting, nationality appears to be more relevant than ever.

“The Syrians were telling the Iraqis: ‘You came to our area and brought IS. You are the problem,’” Hamrin al-Hassan, the camp’s manager, told Middle East Eye sitting in her trailer office, surrounded by her colleagues, a mess of papers and tea.

After fighting broke out the camp, which now holds just over 68,000 people, had to be separated into Iraqi, Syrian and foreign sections, with guards keeping each group in their respective areas.

“The nationalities don’t accept each other. The Russians are especially troublemakers,” said Hassan, as families waited nervously outside, papers in hand, to speak to her and other administrators.

Hassan is one of several Kurdish officials who runs the 1.5-square mile camp near the Iraqi border. The desert area and the nearby town of al-Hol was once an IS stronghold until the area was captured in 2015 by the US-backed Syrian Democratic Forces (SDF), who now guard the camp. 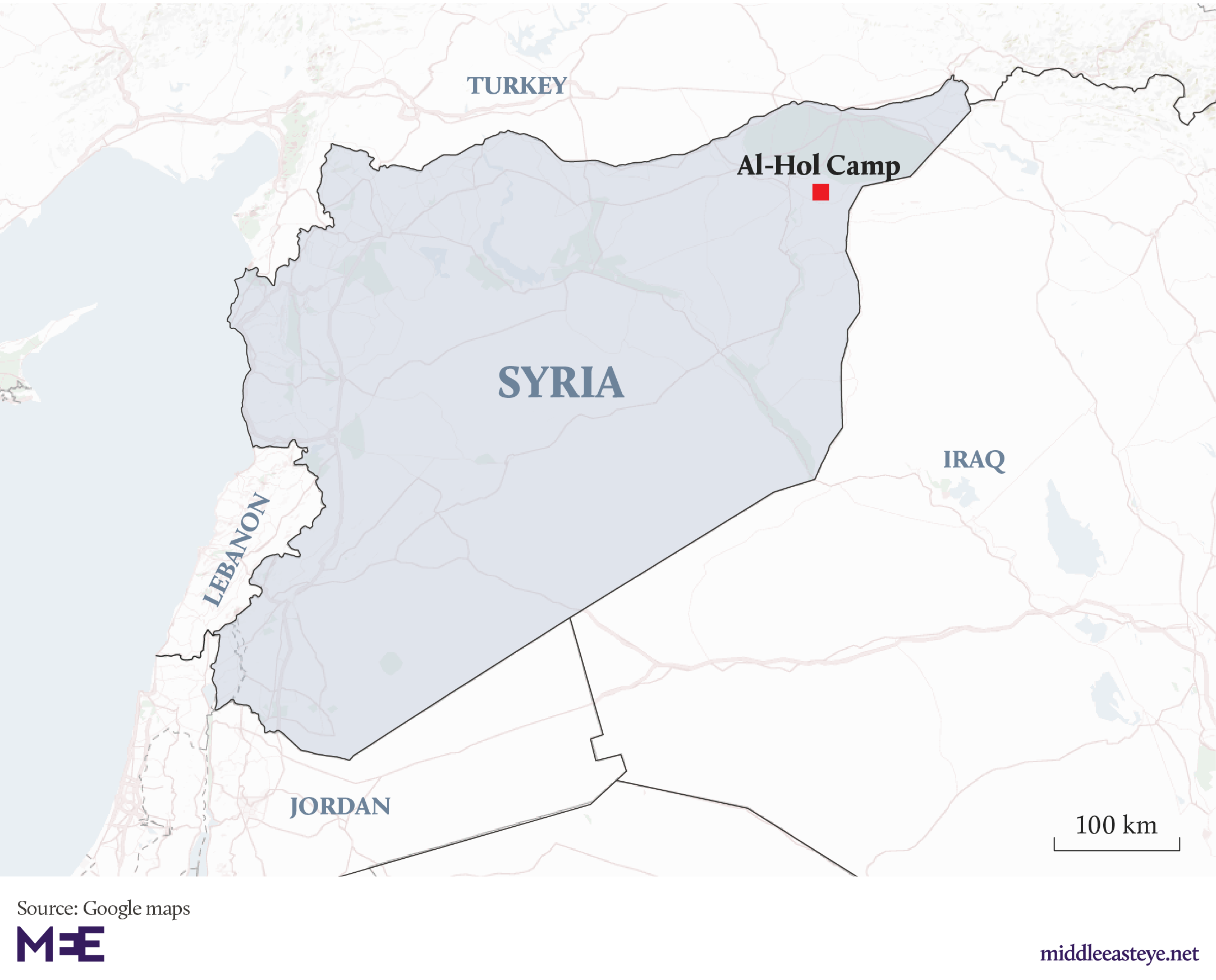 The camp opened in December 2018 to host people living in IS territory taken over by the SDF. While IS combatants were taken to prisons, women and children landed in the sandy enclosure, along with displaced men who were not members of the group.

Thirty-five organisations, including UN agencies and the International Committee of the Red Cross, provide humanitarian assistance to residents, an estimated two-thirds of whom are children.

Amid poor living conditions, the remnants of the group are divided in defeat. Some want to go home and face their fate, while others fight each other, awaiting permanent resettlement, something that for many appears far from fruition.

Not enough water or toilets

The summer heat has only made life at al-Hol more hellish. Families sit outside the administrative offices for hours because it is one of the few shaded areas, aside from the tents they sleep in. A chain-link fence keeps them from entering the area without permission from a doorman.

The main dirt road in the Iraqi section has the hustle and bustle of a city. Garbage litters the ground. Internet and electricity are available, though the latter is not always strong enough to power air conditioning units that are in some of the administrators' offices - but not in tents.

Going to the bathroom and getting water is not always a pleasant experience. “There isn't enough water per person, or enough latrines for the number of people living there,” said Arnaud Quemin, the Syria country director for Mercy Corps, one of the organisations working at the camp.

A report last month from the UN Office for the Coordination of Humanitarian Affairs (OCHA) warns of an increase in waterborne and respiratory diseases alongside existing malnutrition.

More than 1,000 cases of acute diarrhoea are reported and camp administrators are advised to immediately stop working with a private vendor which has brought in ice contaminated with bacteria “100 times more than the allowed level”.

An August UN report noted some improvements. There are still problems with bacteria, but a change in the ice vendor reduced diarrhoea and malnutrition cases among children had also decreased.

It is in these conditions that families who once lived in IS territory wait in tents, and makeshift mosques and restaurants indefinitely for resettlement.

In the Iraqi section, which MEE visited, most women still wear a full-body cover that IS authorities had demanded, completely covering their faces, showing only their eyes underneath black garbs. A few show their faces.

Some fly IS’s infamous black and white flag at times, and there are stabbing attacks against security forces as the group continues to wage war on the SDF.

“Imagine, they are there for their safety, and they stab them in the back,” said Hassan.

There are also conflicts between IS families over the degree to which they choose to adhere to IS’s strict doctrines even now. The first wave, who came in December, were significantly less compliant than those who clung on until the very end and arrived in March from the last IS-held areas, she said.

When some residents tried to impose the hijab on others, fighting broke out, she added.

There are also serious concerns that former female IS fighters, sent along with wives and children as presumed non-combatants to the camp will indoctrinate other residents. Some have called al-Hol a ticking time bomb.

But not all IS wives and children still share the group’s zeal.

'In the beginning, I felt happy'

Aysha Norizeman came to the camp in March from Baghouz – the last pocket of Syria IS held.

'He had something in his brain, what he was looking for. His paradise'

- Norizeman, wife of IS fighter

Unlike IS fighters still at large, the Indonesian national said she does not want to fight the US, whose efforts in the international coalition helped bring about the end of IS’s reign and put her in the camp. Instead, she wants America’s help.

“As we know, America is a superpower,” she told MEE, sitting in an administrative office that female guards brought her to. “If America can push, countries will take back sisters.”

Norizeman first came to Syria, by way of Turkey, in 2014 with her husband who said moving to the Islamic State would bring them happiness. She didn't question him.

“My duty was just to follow my husband,” she said. “In the beginning, I felt happy with my husband."

“He had something in his brain, what he was looking for,” she added. “His paradise."

Life under the Islamic State was good, Norizeman said, except for the bombs. “The bombs I was afraid of,” she said.

But more than her life with IS, Norizeman wanted to focus on her next step which she hopes will be leaving al-Hol to return to Indonesia.

Norizeman does not have a plan for her exit, and is unsure if Indonesia will take her, and asks journalists what they think her prospects might be. Last month, Indonesia's counter-terrorism chief reportedly said the country is open to letting IS family members back in, but said they must first be thoroughly investigated in Syria.

Her first husband died and she remarried a Bosnian man, but she does not know where he is either.

“Brothers in Baghouz said he’s in prison,” she said, referring to male IS members as “brothers”. “I don’t know what happened.” British children of Islamic State members will not be brought back to UK: Report
Read More »

Lydia Izahar is also ready to go. The Malaysian also came to Syria in 2014 via Turkey, arriving in al-Hol in February.

Like Norizeman, Izahar preferred to focus more on her future, than on her past. While she said she is happy a new convenience store has opened in al-Hol and shops there for herself and her three children with money she had from before she left IS territory, she wants out.

“I just want Malaysia to come take me home,” she said.

In March, Malaysia reportedly decided to bring back some of its citizens detained in Syria, question them, and offer them counselling. Izahar is unsure about what would happen if she were to go.

“From what I read in the news, women and children are going to a rehabilitation centre,” she said. “Maybe jail. I don’t know.”

‘They’ll rise up against us’

People are leaving al-Hol slowly. There is a sense among residents and administrators that there is no timeline at all for most people to leave.

'If we don’t fulfil their needs, they’ll rise up against us'

In June, the camp decided to release 800 women and children to their families in Syria, and last month another 317 Syrian residents returned to Deir Ezzor and Aleppo provinces.

The camp administration and the UN say there are efforts underway to send some of the camp’s Iraqis home. According to the UN's July report, 2,000 Iraqi households have applied for repatriation, but the process is "on hold" awaiting further details from the Iraqi government.

Other countries like Germany, Nigeria and Sweden have taken around 800 back, according to camp administrators, though many other countries have been reluctant to repatriate their citizens.

But these numbers only constitute a small percentage of the more than 68,000 still at the camp.

For now, Izahar and Norizeman stay put. The officials responsible for them want more help from NGOs until a new location for the IS families is found – if ever.

“Just now they brought summer clothes,” Hassan said on a 40-plus degree July day. “If we don’t fulfil their needs, they’ll rise up against us.” 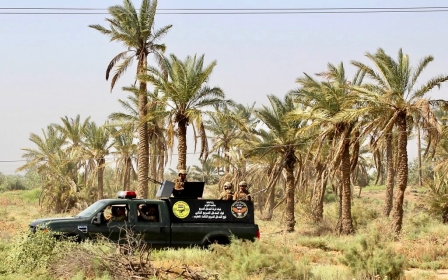