UK Foreign Secretary Liz Truss has said she will do everything she can to secure the release of the jailed British-Egyptian activist Alaa Abd el-Fattah, who has spent more than 80 days on hunger strike in protest at his treatment in prison in Egypt.

Speaking in the UK parliament in London on Tuesday, Truss said her government was "working very hard to secure his release" from prison.

'I am seeking a meeting with the Egyptian foreign minister. He's due to visit the United Kingdom shortly, and I'll be raising his case'

"I am seeking a meeting with the Egyptian foreign minister," she told the House of Commons.

"He's due to visit the United Kingdom shortly, and I'll be raising his case."

She added that a junior foreign minister had met the 40-year-old Abd el-Fattah's family.

The activist, who was an icon of the 2011 Egyptian revolution, has spent eight out of the last 10 years in jail on a range of charges.

While incarcerated in December 2021, he was sentenced to five years in prison by an emergency state security court on charges of "broadcasting false news" in a trial widely condemned by human rights defenders. The evidence used against him was a retweet.

He began a hunger strike on 2 April and was that same month granted British citizenship through his mother, Laila Soueif.

Abd el-Fattah's family had hoped that being granted British citizenship would lead to increased pressure being applied on the Egyptian government, but so far there has been little movement.

"We've always believed that, if the FCDO [Foreign, Commonwealth and Development Office] put its full weight behind Alaa, his nightmare would be over," she added.

"But he is on day 81 of hunger strike now and time is running out. I hope they decide to fully commit before it's too late."

'Lost a lot of weight'

In a post on Facebook last week, sister Seif said she had visited her brother in prison for the first time since 1 May and was shocked at his frail condition, saying he had "lost a lot of weight".

She said she would be starting her own hunger strike in solidarity.

During his incarceration in Tora Prison, he was denied reading materials, a bed, or even a clock. Egyptian officials have questioned his family's assertions that he was fasting and claimed it has footage that "disproves" the claim.

Last month Abd el-Fattah was transferred to the Wadi El Natrun prison complex north of Cairo, where his conditions have reportedly improved, including having access to a bed.

His family has said there is also now a camera in his room, which meant his health could be monitored in relation to the hunger strike.

However, they have repeatedly raised concerns that the UK is refusing to fully pressure the Egyptian government over the activist's condition as they fear damaging trade relations, reportedly worth billions of dollars.

Speaking to Middle East Eye last month, Abd el-Fattah's aunt Ahdaf Soueif said that the UK risked "damage to its reputation" if it failed to pressure the Egyptian government to release Abd el-Fattah.

"The UK should not accept that top-level representations to a country that is an ally and a friend are not responded to with alacrity and goodwill," she said.

"The UK should not accept that its own declared commitment to human rights and fair processes are brought into question by an ally and a friend." 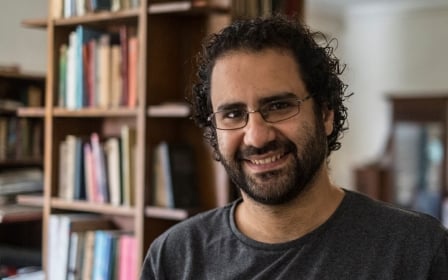