Algeria: Hundreds arrested as authorities crack down on protest movement

Rights activist says almost 500 people taken in for questioning in around 15 provinces, mostly in the capital Algerian authorities put down weekly pro-democracy protests in the capital Algiers and across the country on Friday, detaining hundreds of demonstrators, human rights activists said.

"March prevented and suppressed in Algiers and Annaba, confrontations in Bouira, arrests in several provinces," said Said Salhi, head of the Algerian League for Human Rights (LADDH), adding that rallies had gone ahead in Bejaia and Tizi Ouzou.

Salhi said that almost 500 people had been taken in for questioning in around 15 provinces but mostly in the capital, and that two journalists were briefly apprehended. Most of those detained were later released, though some were kept in detention and will appear in court on Sunday.

A heavy police presence prevented the march from taking place in the capital Algiers, AFP journalists said, and police had blocked roads and regular protest routes from the morning.

"For the 118th Friday (since the first Hirak protests), 'Algiers the White' has turned police blue," said Lyes, a man in his 40s who declined to provide his surname, referring to the capital by its Arabic moniker.

The largely leaderless and politically unstructured Hirak movement was launched in 2019 over then-president Abdelaziz Bouteflika's bid for a fifth term in office.

The ailing leader was forced to step down weeks later, but the Hirak has continued its demonstrations, demanding a sweeping overhaul of a ruling system in place since Algeria's independence from France in 1962. Marches were suspended for around a year due to the coronavirus pandemic, but protesters have returned to the streets since February and given the movement new momentum.

The interior ministry last week said that Hirak protest organisers would have to advise authorities of protests in advance, a move that came amid mounting government pressure on the movement as early legislative elections approach.

The Hirak has rejected the 12 June vote, and human rights organisations have warned of increasing repression in the lead-up to the polls.

At least 133 people are currently detained in connection with the Hirak movement or cases related to freedom of expression, according to Algerian Detainees, a journalist-run website. 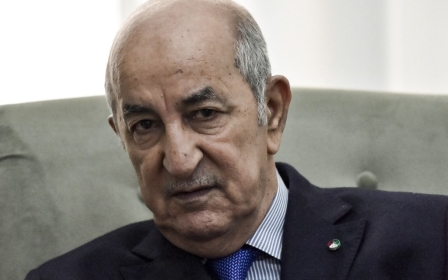 Algeria
Algeria: Bill to revoke citizenship met with anger and fear among activists