Algerian authorities jailed a journalist on Monday who played a prominent role in covering the country's pro-democracy movement last year on charges of "endangering national unity" and "inciting an unarmed gathering".

Khaled Drareni, editor of the news website Casbah Tribune and correspondent of TV5 Monde and media watchdog Reporters Without Borders (RSF), was sentenced to three years in prison, his lawyer said.

During the trial, held via video conference because of the coronavirus pandemic, Drareni denied any wrongdoing and said he was only working as an independent journalist and exercising his right to inform the public.

'Today's court sentence is a travesty of justice, and a blatant affront to human rights'

Drareni, 40, who had been in detention since late March, was also ordered to pay a fine of 50,000 dinars ($400), according to the National Committee for the Release of Detainees.

The journalist's supporters said the verdict resembled one that would have taken place in the tightly controlled era of former President Abdelaziz Bouteflika, who was pushed out by the mass demonstrations.

The protest movement started in February 2019, and after obtaining the resignation of Bouteflika after 20 years in power, protests continued, demanding an overhaul of Algeria's political system that has been in place since independence from France in 1962.

While a new president was elected in December, the pro-democracy movement is seeking deeper change in a nation whose rulers have been shadowed by the army.

In recent months, Algerian authorities have arrested and prosecuted numerous activists in a bid to prevent protests from resuming as the coronavirus lockdown is lifted.

In their case against Drareni, prosecutors used as evidence a Facebook post in which he said the Algerian political system had not changed since Abdelmadjid Tebboune was elected as president, and that the journalist shared a call by multiple political parties for a general strike.

"Khaled Drareni was only doing his job of informing citizens. He did not commit a crime," Fetta Sadat, a lawyer representing Drareni, told the Associated Press.

The verdict "is proof that Algerian justice is not free but an instrument in the hands of power that can be used to intimidate Algerians," Sadat said. 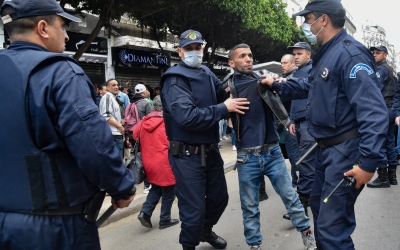 "Today's court sentence is a travesty of justice and a blatant affront to human rights, including the right to freedom of expression and media freedom in Algeria," said Lynn Maalouf, Amnesty International's acting regional director for the Middle East and North Africa.

"Khaled Drareni is being punished solely for having bravely exposed the crackdown by the authorities on the rights to freedom of expression and peaceful assembly, including their harsh response to the Hirak protest movement."

Reporters Without Borders dismissed the ruling as "arbitrary and absurd" and called it "judicial persecution against a journalist who is the honour of his country", urging global mobilisation in his support.

At least one other Algerian journalist is currently awaiting trial, according to the media watchdog, which ranks Algeria 144th out of 180 countries in its 2020 Press Freedom Index.