Demonstrations in Algiers continue to advocate for sweeping reforms A young man who was injured in protests in the Algerian capital last Friday has died, Ennahar TV said.

Ennahar said there were two conflicting accounts regarding the death of the 18-year-old. The first was that he was beaten during last Friday's protests and the second was that he fell from a truck on his way to the protests.

Police are investigating his death and did not disclose his name, Ennahar added.

Huge crowds of protesters filled central Algiers for a ninth weekly mass rally on Friday, galvanised by the departure of long-time president Abdelaziz Bouteflika but vowing to keep up their demands for sweeping reforms.

Activists chalked up a second victory earlier on Tuesday as one of the three, Constitutional Council Chief Tayeb Belaiz, followed Bouteflika to the exit.

But Friday's crowds were pushing for more concrete reforms as they clogged streets for several kilometres in the heart of the capital. 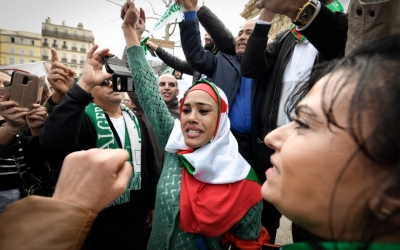 Demonstrators outside the iconic main post office building chanted: "The people want them all to leave!" and "Enough of this system!"

"Just because Belaiz has resigned that doesn't mean it's over," student Lyes Adimi, 24, told AFP.

"What has the constitutional council ever done apart from validating the fraud of the system it belongs to?"

The protests, which began on 22 February, have continued as many call for the removal of an elite - ominously referred to as le pouvoir (the power) or le systeme (the system) - that has governed Algeria since independence from France in 1962, and for the prosecution of people they see as corrupt.

Protesters are demanding the resignation of the two remaining members of a group dubbed the "3B" - interim leader Abdelkader Bensalah and Prime Minister Noureddine Bedoui - saying government stalwarts should be entirely excluded from any political transition.

Cries of "Bensalah resign" reverberated in Algiers on Friday as the crowds looked to pressure the placeholder president.

Despite Bensalah calling a presidential election on 4 July, Algerian demonstrations are demanding a broader overhaul of the political system.

Ailing Bouteflika saw his two-decade grip on power brought to an end after the army heeded the calls from the streets and pushed for his departure.

Now the military has become the key player in determining how the next steps unfold.

The army "is convinced that the crisis can be managed through appeasement", said Geneva-based political scientist Hasni Abidi.

He said its strategy was one of "gradually minimising the scope of concessions".

But army chief Ahmed Gaid Salah hinted this week that the military may soften its position, saying: "All options remain open... in order to find a solution to the crisis as soon as possible."

He also vowed that the Algerian army would not turn its weapons on its people and would make sure that "no drop of Algerian blood is spilled".

The presidency announced that Bensalah had started meetings with "national figures" on consultations about the future, but they appear to fall far short of the demands of demonstrators.

Marginalised opposition parties - which have been sidelined by the mainly grassroots protest movement - have been invited for talks on Monday. 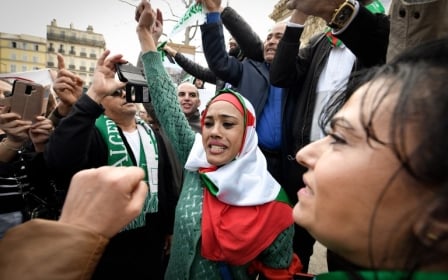