At least 37 students and activists have been arrested in the past two weeks as part of an 'orchestrated attempt to intimidate demonstrators', rights group says Algerian students staged a protest on Sunday at one of the country's most prestigious seats of learning to demand the release of dozens of people jailed over the past two weeks.

Footage shared on social media showed a group of students taking part in a sit-in at the University of Bab Ezzouar (USTHB) on Sunday, calling on the country's ruling elite to release recently jailed students and activists.

According to Amnesty International, at least 37 students, political and other civil society activists have been arrested since 11 September.

While some of the protesters have been released, at least 24 people remain in detention.

"The wave of arbitrary arrests appears to be part of an orchestrated attempt to intimidate demonstrators including political and other civil society activists ahead of the elections, creating a climate of fear and repression," Heba Morayef, the Middle East and North Africa regional director at Amnesty International, said in a statement.

"Instead of trampling all over the rights of Algerians, the Algerian authorities should respect the right to freedom of peaceful assembly and instead learn to listen to protesters."

Translation: Gathering in solidarity at the university of Bab Ezzouar to demand the liberation of detained students

Algeria has seen a wave of demonstrations since February, which forced veteran President Abdelaziz Bouteflika to resign and triggered a standoff between protesters and the army-backed government.

Attempts by the current government to schedule elections on short notice have been rejected by protesters, who fear the army is merely trying to consolidate power in its own hands.

Dalia Ghanem, an Algeria analyst and resident scholar at the Carnegie Middle East Center, told Middle East Eye that the latest crackdown was geared at deflecting mounting anger from the military onto the much loathed police.

"The leadership is being assertive and sending a message to the public that elections will have to [take place in an] organised [environment]," she said. "The authorities are starting to marshall the police in order to both scare the people and keep the reputation of the military intact - as it's not them who will be doing the dirty work."

Last week, clashes erupted in the town of Oued Rhiou in the country's northwest, after an unmarked police car collided with a motorcycle it was chasing, resulting in the death of a 15-year-old, and a serious injury to another teenager.

Protesters encircled the local police station and threw stones at the building, before police fired rubber-coated steel bullets and tear gas at the crowd - reportedly killing at least one other person.

On Sunday, reports emerged that the police officer who drove the unmarked car that killed the teenager was placed in temporary custody.

Meanwhile, army chief Ahmed Gaid Salah on Wednesday ordered that buses and cars bringing protesters into the capital Algiers be stopped and seized, the latest in a series of measures aimed at quelling big weekly demonstrations demanding a purge of the old ruling elite.

However, this did not stop thousands of Algerians from coming out en masse across the country on Friday, in defiance of police checkpoints.

Since Bouteflika's resignation, an opaque coalition of political and military figures known as "le pouvoir" - or "the power" - has been reluctant to change the constitution and make any other major concessions. 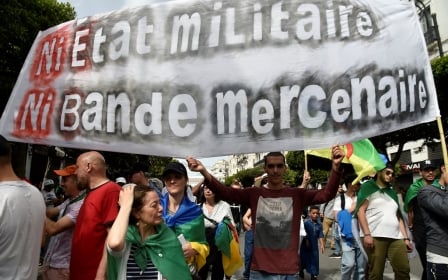 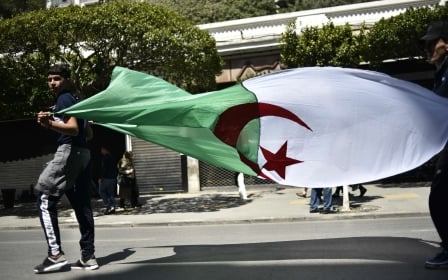