ANALYSIS: Egypt protest law may be unconstitutional, but it's still in force

Egypt's top court ruled that a key part of the country's protest law was void - but nothing will change on the streets as a result, say analysts

In Egypt, you can be arrested for protesting against the protest law (AFP)
By
Leena ElDeeb

Cairo, Egypt - Initial reports suggested a change was coming - Egypt's top court had struck down a crucial article of the country's controversial anti-protest law, ruling it "unconstitutional" to make citizens seek permission from the interior ministry to stage demonstrations.

The supreme constitutional court said that Egypt's constitution guaranteed freedom of association and the right to peaceful protest.

But within hours of the decision being made public on Saturday, reality began to bite: the court had upheld other areas being contested by rights lawyers, including one that criminalises any gathering that could threaten "public order".

As a result the protest law, brought in after Abdel Fatah al-Sisi deposed the Muslim Brotherhood president Mohamed Morsi in 2013, would remain very much in force.

The thousands of people imprisoned under the rules will remain in jail, and anyone falling foul of the police still face up to five years in prison or a hefty fine.

Constitutional expert Raafat Fouda, a former head of the faculty of law at Cairo University, told Middle East Eye that verdict was a great disappointment to the Egyptian people.

"All the people, especially the ones who are imprisoned on the basis of the law, were expecting courage from the court. This did not happen," he said.

"The protest law is a sin. It is blasphemous. A public that rose with two revolutions in three years doesn't deserve this law. It deserves freedom."

Fouda said the verdict would strip the minister of interior's power to ban protests, transforming the process so that protesters notify the authorities rather than seek approval. But even that is a sop, he said.

And it did nothing for the thousands of people still locked up under the law.

"The people are not waiting for a permit to protest, because they won't protest in the first place. Every mother and every father are only waiting for their son to get released from jail."

The challenge to the law was brought before the constitutional court by a group of eight lawyers led by the leftist former presidential candidate, Khaled Ali, on 17 June 2014.

But the verdict did not consider several articles on the statute books - specifically articles seven and 19, which have imprisoned so many protesters.

Only article 10, which specifically gave the minister of interior the power to ban protests, was struck down. But even this was a hollow victory: researchers said the change would merely pass responsibility from the minister to the judiciary.

Ahmed Abdel-Naby, a lawyer at the Regional Centre for Rights and Freedoms, said police can still arrest Egyptians on the vague grounds of "obstruction of justice" and "delaying justice," contained in article seven.

That has led to many people being arrested and disproportionately punished for their supposed transgressions.

"The verdict did not address the articles that impose such sentences, especially that there is a mismatch between the act and the punishment," said Abdel-Naby.

"We are talking about punishments that don't fit at all with the offence, especially that the most extreme thing that could happen [in a protest] is vandalism, which makes the punishment very exaggerated.

"Those arrested get locked up with suspected terrorists. So we are also pushing them to resort to violence as a method for vengeance.

"Secondly, the articles that used vague terms like 'obstruction of justice' or 'delaying justice' were not addressed also in the verdict. All these terms are broad and have been included specifically in article seven. It should have been the court's priority to look into these articles."

All the power in their hands

And, according to  Abdel-Naby, the law is one-sided.

"It doesn't impose any punishments on the ministry of interior for using excessive violence, or impose any controls on what can be done to disperse protests," he said. "The law put restrictions on civilians only."

However, Tahany el-Gebaly, the former vice-president of the supreme constitutional court, had another view.

"The verdict championed the right to protest, by ruling that the authorities – represented in the ministry of interior in all cases - may not ban or restrict it, because it has considered the text of article 10 violates the right to protest and therefore is unconstitutional," she told MEE.

"If a protest is not peaceful it is against the law. Freedom of speech is guaranteed but it should not violate civil rights, and impede daily life – and that is what the texts of articles seven and 19 state."

Nevertheless, the Egyptian government on Saturday said it would amend the law in line with the court's ruling.

That follows Sisi's statement in October that his government would look into revising the law.

"The government will undertake, in coordination with the relevant agencies, to study suggestions and proposals to amend the protest law," he said.

Sisi laughed and said "you really love protesting," adding that the revisions would be presented to parliament.

And while the love of protest may be keen, the right to do so remains effectively banned. 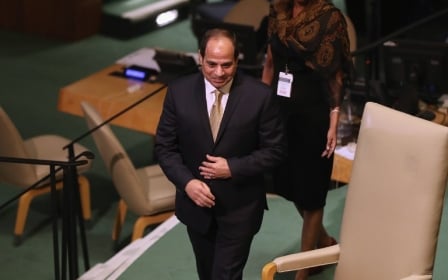