Mourners in Baghdad carry a coffin of a demonstrator who was killed at an anti-government protest, while others carry a picture of Iraqi Shia cleric Moqtada al-Sadr (Reuters)
By
Tom Westcott
in
Baghdad

Baghdad’s Tahrir Square, occupied for weeks by protesters, exploded back into life on Friday evening as hundreds flocked there to celebrate Prime Minister Adel Abdul Mahdi’s resignation and Iraq’s football victory in a match against the UAE.

Red and yellow tuk-tuks, made famous by their role as rescue vehicles in the protests, weaved through the surge of flag-waving pedestrians and a minibus blaring anti-government songs with youth balanced precariously on its roof.

“Mahdi is a good man to have resigned but the protests won’t stop, not now, not ever, not until the whole government falls,” bellowed 16-year-old tuk-tuk driver Ali, above the sound of horns and fireworks.

Mahdi’s resignation followed weeks of protests in central and southern Iraq against poverty, scant job opportunities, endemic corruption and the failures of Iraq’s current government to affect meaningful change on the ground.

“We’re as happy as if it was a wedding,” said student Rial, 23, giggling and grasping the hands of sisters Benin, 19, and Jenna, 16. “Yesterday we were weeping because of what they did in Nasiriyah [where at least 40 protesters were killed by government forces], but today we’re celebrating because finally, after everything he did, Mahdi has resigned.”

But, for most protesters, the beleaguered PM’s resignation is just the first step towards more radical changes they are demanding, including the overthrow of the entire current government and parliament, and the establishment an emergency governing body headed by Iraq’s President Barham Salih.

“Mahdi’s resignation is not the solution. We want the whole government to resign. We want early elections under a new electoral committee working to international standards, a new parliament and a new constitution,” oil engineer Hussein Abdulrahman, 25, told MEE. “We have been optimistic since 2003 and after 16 years we’ve still seen no improvements and people have had enough.

“We’re 39 million in a country that should be rich, but just one million people in positions of power are taking everything while everyone else has absolutely nothing. I’m okay because I work in the private sector, but I see the desperate situation for my family and friends and that’s why I’m here.”

For a group of retirees seated outside a tent, the resignation was meaningless. Preferring not to give their names, they criticised successive post-2003 governments for stealing “billions of dollars” of Iraq’s oil wealth, and prioritising personal gain while neglecting the basic needs of ordinary Iraqis.

“The whole government must fall, not just Mahdi,” said one man, speaking on condition of anonymity. “We want an end to this culture of sectarianism, nepotism, political parties and abuse of power, which have destroyed our country. We don’t want another coalition government or any more ministerial positions given out to friends of political parties. We need a proper technocratic government and we want this for the future of our sons.”

Senana Ghani Saleh, 50, who has been with the protests since they started in October, cooking and cleaning a makeshift toilet block, also cited the future of Iraq’s youth as the reason for her presence, despite having lost her own son in a car accident.

“We will give all the blood needed for the future of our land and our tears will become like thunder to the politicians,” she said, vowing that the only way she would quit the occupation would be “in her coffin”.

A 'spark of hope'

In the days preceding Mahdi’s resignation, Baghdad’s protests appeared to be flagging, but the violence in Nasiriyah and the PM’s announcement have renewed fervour for what protesters term a "revolution".

“It’s a dual victory today - Mahdi’s resignation and our 2-0 win against the UAE in football,” said bookstore owner Sam, whose shop on a corner of Tahrir Square stockpiles food and medical supplies for the hundreds of protestors still occupying downtown Baghdad.

“These two achievements are a much-needed small spark of hope for people.”

Sam remembered Mahdi as a former regular customer in the bookstore he has run for the last 25 years and laughing, said the PM still owed him over 100,000 Iraqi dinar for books bought on credit.

“Mahdi’s not the problem and he’s nothing compared to others before, like [former prime minister] Maliki, who gave us the Islamic State (IS), but everyone running the country since 2003 have been corrupt and should all be judged by the courts of law,” said Haidar Abdulrahman al-Reidi, a 45-year-old from Baghdad’s Sadr City suburb, who tries to feed his family through occasional days of casual labour.

Many of the protesters are long-term unemployed, including graduates who have failed to find work in their fields.

“We need the simplest things - services, and better schools, education systems and hospitals. Right now, we have nothing, and we’ve had nothing for 16 years,” he said. “Honestly, even if a Jew came to lead us properly right now, we would accept him because we need a total change to the whole system.”

Pointing out that former leader Saddam Hussein was executed for killing 96 Shia accused of involvement in a 1982 assassination attempt, Reidi said the current government and parliament had killed far more people during recent crackdowns on protestors. “They should be judged in the same way, and hanged in public,” he said.

Official figures list the dead as 409 with 17,745 injured, according to member of Iraq’s High Commission for Human Rights Dr Ali Albayati.

Although in Tahrir Square, people routinely claim that over 1,000 have been killed in two months of demonstrations, they have no evidence and the posters of "martyrs" killed during the protests remain in the hundreds.

Saddam’s name was to be heard in several quarters, especially among the predominantly Shia residents of Sadr City.

“I didn’t support Saddam but, actually, he gave the Iraqi people their rights, compared with what we have now and, when he killed people, there was usually a reason for it. He didn’t kill people arbitrarily, which is what’s happening here,” said store-owner Mohamed.

“If we stay like this, as a republic, nothing will change and our problems will continue.”

Behind the jubilant parades around Tahrir Square, the mother of Amir Ahmed, a young protester killed two days earlier, wept for her dead son. Surrounded by his friends, the candlelit vigil illuminated his gas-mask and helmet, along with spent tear-gas cylinders.

Some injured were still being treated in hospital tents on Friday, behind taped-up signs stating: “No sticks, no molotov cocktail, no masks.”

This plea is an indication of increased violence inside the protests, which initially were peaceful and unarmed. Behind Tahrir Square, where a neglected garden is filled with tents manned by different civilian organisations, a group of men armed with police batons and iron bars gathered in front of an illuminated statue, talking earnestly.

'What should we do? We only have the Iraqi flag, so we throw a few molotov cocktails, just as a warning, because if we lose any more ground, we will lose our strength'

Most wore the blue medical masks that have become a symbol of the protests but also serve to conceal identities. “No photos, no photos,” shouted one, striding over, pushing his baton behind his back.

“This is just for self-protection. We’re protecting ourselves and the protestors,” explained another protester Ahmed. “There are some rogue people with light weapons who have infiltrated the protests so we have to protect ourselves.”

Although entry points to the protests through gaps in large concrete bollards are lightly policed by unarmed soldiers who carry out cursory bag checks, there is little presence of official security forces inside the occupied area, although MEE saw one soldier who appeared to be working undercover.

Protester Amir al-Asadi, 28, admitted that molotov cocktails were now being routinely deployed by demonstrators at what they call the "frontline", over a kilometre beyond Tahrir Square. “The situation at the frontline is very poor and the protestors have been infiltrated by members of the political parties. When the police fire smoke bombs, these fake protesters hit the real protesters as they try to flee.”

He described nightly deadlocks at Jilani Square where protestors and police waited for market stalls to be cleared away at dusk, before launching into street battles where neither side gained ground.

“The protestors try to move forward and the police respond by opening fire with live rounds, smoke bombs and canisters containing tear gas, chilli flakes and nerve agents,” Asadi said. “What should we do? We only have the Iraqi flag, so we throw a few molotov cocktails, just as a warning, because if we lose any more ground, we will lose our strength.”

Resignation too late for restive south

Mahdi’s intention to resign has had little impact in Iraq’s south, despite his decision coming after government forces opened fire on protesters in Nasiriyah on Thursday during failed attempts to reopen central bridges closed for weeks. “The situation is terrible. There has been fighting since morning until now,” Nasiriyah resident Amir told MEE by phone on Friday night. Security forces had killed 55 people and wounded over 250, ten critically, he said. Although this brutal crackdown had compelled Mahdi to resign, he said, it had not yet changed the situation on the street.

“It’s total chaos and there’s no government control here at all. The protestors have invaded the police directorate and there are no police on the streets now, only tribes with guns.”

Several Baghdad protesters voiced fears that the capital could degenerate to similar levels. Asadi, just back from delivering supplies to the "frontline", claimed increasingly strong reactions by security forces over the last four days.

“If we continue to have more martyrs and if there’s no further progress, things could reach a tribal level, where the clans will gather together and fight, as is happening now in Nasiriyah,” he said.

“We are afraid of this because the clans are strong, they have a lot weapons and it would become a serious war.” 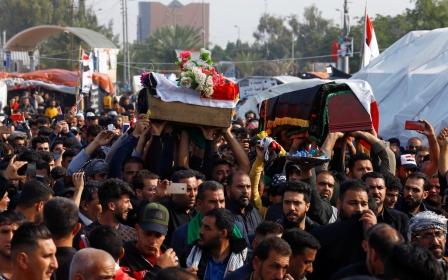 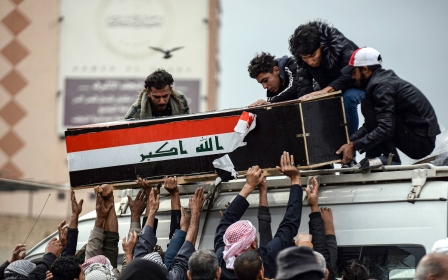